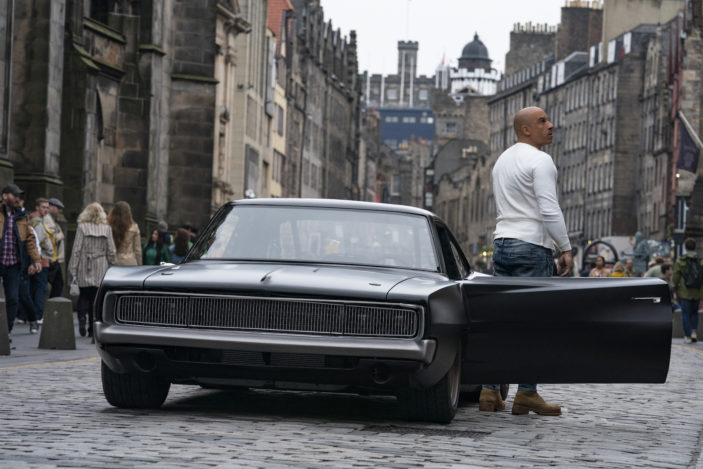 As melodramatic and as nonsensical as one would expect from a series that defies the laws of physics as freely as it does whilst waxing lyrical on the importance of family, Fast & Furious 9 (or F9 as it’s being marketed) is the type of ludicrous, high-octane fluff designed for the biggest of screens.

Another pandemic casualty that saw its original 2020 date shifted – and, honestly, it opening nearly 20 years to the day of the first film now is some marketing symmetry that even they couldn’t have predicted – F9 arrives in all the glorious, over-the-top fashion you’d expect, with returning helmer Justin Lin (who directed Tokyo Drift and the subsequent 4th, 5th and 6th films) confidently proving that he’s the most suitable mastermind to navigate such lunacy, doing so with violent precision and an all too knowing wink to the audience, confirming that he too is completely in on the joke.

Whilst its early moments clue us in on the expected self-isolation that Dom (Vin Diesel, gravelly-voiced as ever) and Letty (Michelle Rodriguez) have taken upon themselves in order to salvage some type of safe life together, it isn’t long before, as expected, they’re brought back to the life of fast cars and furious foes.  When covert ops leader Mr. Nobody (Kurt Russell) sends the crew – Tej (Chris “Ludacris” Bridges), Roman (Tyrese Gibson), and Ramsey (Nathalie Emmanuel) – a distress signal that indicates femme cyberterrorist Cipher (Charlize Theron, trading in her previous film’s dreadlocks for an undercut-cum-bob that she still manages to make look chic) is still up to her villainous ways, the team is sent into overdrive in their determination to take her down.

Though we know this isn’t going to be the easiest mission, Cipher’s capture is made all the more elusive due to the interference of Jakob (John Cena), Dom’s up-to-this-point unreferenced brother who has his own nefarious agenda in planned global domination; Cena’s a fine, and sensible, addition to the canon, but he’s not quite the substitute for fellow man mountain Dwayne Johnson.  Jakob’s presence means it’s only fair for baby sister Mia (Jordana Brewster) to get in on the action too, with the Justin Lin/Daniel Casey-penned script wisely utilising her character beyond being simply the wife of a character that sadly can no longer be replicated in the series; credit where it’s due though in still referencing the late Paul Walker‘s Brian O’Connor with the respect deserved.

Given the amount of characters on hand for F9 – and that’s not even including the much hyped return of the supposedly deceased Han (Sung Kang) – it makes sense that it runs at an extended running time of 145 minutes, with a surprising amount of time dedicated to Dom and Jakob’s back-story (because, you know, family) and where the first taste of their brutal rivalry was formed.  Though it does help set up their dynamic, the Fast & Furious films never needed overt exposition to get by, and whilst the script has an awful of lot self-aware fun nodding to some of the series’ more exaggerated moments (Roman dismisses the use of the submarine from The Fate of the Furious), it’s the action sequences in all of their eye-rolling glory that are the true bread-and-butter of the franchise.

If moments like the aforementioned use of the submarine and Dom catching Letty in mid-air had you howling with both unbelievable laughter and an odd sense of being impressed, F9 dials itself up to 11.  I’d be doing anyone a disservice by detailing any of the craziness on board, but the fact that Tej and Roman ending up in space is probably one of the least outlandish set-pieces the film cooks up should give you an idea on how overboard they truly go.

Not in the least bit likely to convert naysayers but completely ready to surrender to the insanity the previous 8 films (and spin-off Hobbs & Shaw, for that matter) all happily gave way to, F9 is contained mania at its finest.  More fast than it is furious but joyfully loud and too much fun for its own good, the fact that these films have defied the critics and their own expectations for 2 decades now is a testament to this family (yep, there’s that word) and the evident love and confidence they have in knowing that, sometimes, too much is never enough.

Fast & Furious 9 is screening in Australian theatres from June 17th, 2021.