Film Review: Fall delivers the expected thrills but having the suspension of disbelief for it is a very tall order 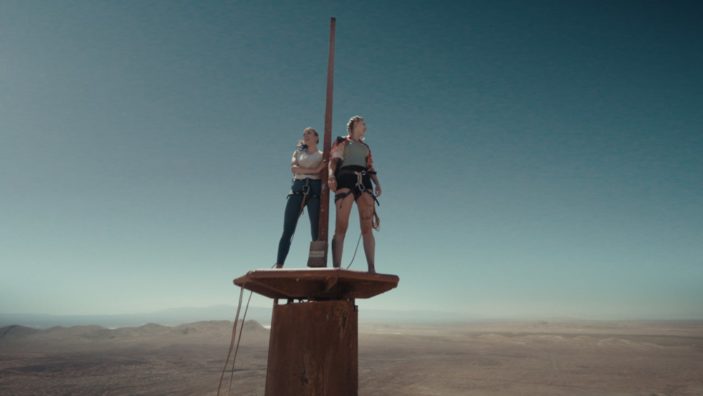 Fall tells the story of Becky (Grace Caroline Currey), an adventurous go-getter who is always up for a challenge in service of thrills and living life to the fullest. She is happily married to the charismatic Dan (Mason Gooding, in a small role). Whilst climbing together on a cliff face with the voracious Hunter (Viriginia Gardner), the two women face a tragic accident when Dan falls to his death.

51 weeks later – as the title card suggests – Becky has succumbed to alcoholism and becomes estranged to everyone around her, including her father James (Jeffrey Dean Morgan). After a long absence, Hunter comes back into her life and suggests to face her fear by climbing a 610 metre TV tower. As an impromptu sales pitch, Hunter convinces Becky that she should do it not only as a means to move on with her life but also to honour Dan by scattering his ashes when they reach the top. But as they reach the tall structure, the challenge of climbing to the top may be the least of their problems.

Fall is the latest film from Scott Mann; who is best known for mid-budget action thrillers that have small yet loyal followings. The most known films include the survival thriller The Tournament (featuring Robert Carlyle, Kelly Hu and Scott Adkins) and the action throwback Final Score (featuring Dave Bautista and Pierce Brosnan). Following on the modesty of his earlier work, we have Fall: a contained thriller with an inspired premise. Two protagonists in an unlikely situation with a low chance of survival, with the location being an incredibly tall structure that is sure to wring the tension out of vertigo. Does Mann make the most out of the potential of his premise?

On the positive side, Mann make the most out of their meagre resources by showing remarkable visual invention. Thanks to the stellar cinematography by McGregor, there is nary a single shot in the film that does not feel like it wasn’t shot on a film set or a green screen and it makes the story incredibly easy to be engrossed in. The geography of the location is well-realized so that the depth within the shots feel immersive; a sense of heightened (no pun intended) tension that is palpable. There are a few inventive moments within the visual storytelling that up the dramatic ante; including one moment showing the point-of-view of a falling shoe that conveys the vast distance.

The lead actresses try their very darndest to bring weight to their flavourless characters. Currey does overdo the trauma of the character of Becky in the first act – although to be fair, Mann’s direction of the human drama at hand does not help her. But the way she conveys the shift from self-institutionalized depression to determined resolve is effective and feels earned in the third act.

However, the standout of the two leads is Gardner. Playing the more proactive role, Gardner has to convince in playing an impulsive character whose layers within hold something powerfully human. She plays the impulsions of the role effortlessly but it is the vulnerability behind the character that makes the impulsions behind her actions believable, even if the script goes against her work.

Which then leads to the haphazard script (also written by Mann). With a story that is set in one setting for almost the entirety of the film, Mann has to try very hard to maintain the audience’s interest on the thrills as well as the drama. Unfortunately, his ways of maintaining the tension and dramatic stakes feel ridiculous at best and derivative at worst. The storytelling is as rickety as the tower structure itself and it often feels like an excuse to enact one illogical scenario after another.

From the opening scene, we witness a tragic death that informs the drama of the entire film. However, the scene feels derivative of the opening of Cliffhanger (another film involving climbing) and especially Vertical Limit (which involves similarly-contrived malfunctioning equipment); making the drama feel phony and unearned. The more the film riffs off other sources, the more people will realize that they have seen all these elements before; making the film feel utterly predictable. The ridiculousness hits a breaking point in the third act that not only riffs off another movie (which will not be revealed since it would entail spoilers) but also makes the film unintentionally funny. While unintentional humour is still entertainment, it is not what everyone wants in a film.

Overall, Fall is an enjoyable exercise in inducing terror thanks to its stellar performances, a keen visual eye and its inspired premise. However, the problematic script hinders matters to the point that the film becomes laughable; making one’s mileage vary.

Fall is out in cinemas now.