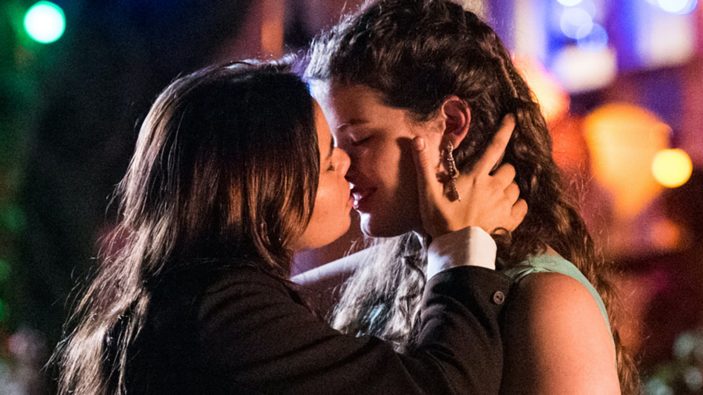 Sophie Hawkshaw stars as Ellie, a high school student captain who has a healthy relationship with her overprotective mother Erica (Marta Dusseldorp) and feels content with her existence via her good grades and her source of inspiration through her subject for her assignment Faith Underwood (a cameo by Chiara Gizzi).

The main thrust of the plot involves Ellie gathering up the courage to ask her crush, Abbie (Zoe Terakes) – a rebellious classmate who has an affinity for horses – to the upcoming formal. But, before she needs to summon the courage to pull off that Herculean task, she would have to come out to her mother before doing so.

But to help Ellie out, her dead aunt Tara (Julia Billington) has been summoned to offer her some advice in her ordeal; even though Ellie finds her presence more detrimental than anything else. But gradually over time, Ellie realises that her decision uncovers more historical baggage, involving her loved ones, then she would ever realise.

The title Ellie & Abbie (& Ellie’s Dead Aunt) gives off the impression that the film would be a cutesy experience and while it may be at times, writer/director Monica Zanetti aims for something more substantial and heartfelt in the process. It sounds like a difficult task to undertake; especially with a brisk runtime of 81 minutes. But, Zanetti takes the “coming out” narrative and imbues it with historical backstory that supports the drama and characterisations, making the film becomes a genuine crowd-pleaser.

Let’s start off with the negatives first. The tonal balance of drama and comedy can be off-kilter at times, which can come off as blatant with its messaging. Like in one scene where the character of Erica reveals her plight that comes back to haunt her. Or during a scene involving coarse language that is overdone and does not really make much sense culturally i.e. the f-bomb and the c-word are shown to be incredibly offensive and yet the usage of the latter is desensitized to the point that it is almost considered as a term of endearment.

The film also lacks focus in its storytelling i.e. the introduction of Tara. Her subplot involving a past tragic incident (that eerily proves prescient) adds to the aspect of the romance substantially, lending dramatic power and depth into the “coming out” narratives of both Ellie and Abbie. However, the Tara character exists more as a plot device rather than a being. This makes her presence feel quite jarring and the lack of it in the second half of the film very noticeable. One can argue that the presence of the supernatural could have been taken out and that the drama from the backstory and the main plot would have been sufficient enough.

On with the positives. The cast give wonderful performances that manage to both charm and compel with utmost sincerity and good comedic timing. Hawkshaw manages to make the character of Ellie both idiosyncratic and endearingly ordinary at the same time; she lends life to a role that could have been a cartoon. The same goes for Billington, whose effervescent spirit in the role of Tara does veer towards pantomime. But she manages to pull it together and create a fun presence that proves enjoyably jubilant and eventually inspiring when her backstory is revealed.

Takeres lends an initially aloof appeal in the role of Abbie and as their character starts to open up, they come across as compelling as their façade unravels in terms of their “coming out”. The lead couple have great chemistry that is immediately believable in a way that is cringingly awkward, amusingly funny and most importantly, easy to root for. Alongside the supporting performances from Rachel House (always a comedic pleasure) and especially Dusseldorp (who proves to be engagingly neurotic and poignant), the cast is faultless.

As noted earlier, the integration of historical context of LGBTIQ issues with the narrative lends much needed dramatic juice to the romance plot that could have otherwise proved to be inconsequential. Seeing the sides of Ellie, Abbie and Erica in their terms of “coming out” provides ample weight to their characterizations and viewpoints that prove to be relatable and emotionally stirring, if quite unsubtle. While the tonal balance may be quite off, Zanetti and editor Nicole Thorn compensate with concise pacing that never drags the drama and comedy beyond breaking point; especially the comedic angles like the fish-out-of-water angle that could have been stale.

Overall, Ellie & Abbie (& Ellie’s Dead Aunt) is a charming and noble effort from Zanetti that proves positive with its LGBTIQ representation thanks to charming performances, concise storytelling with how it meshes its drama with character and a genial tone. Good effort.