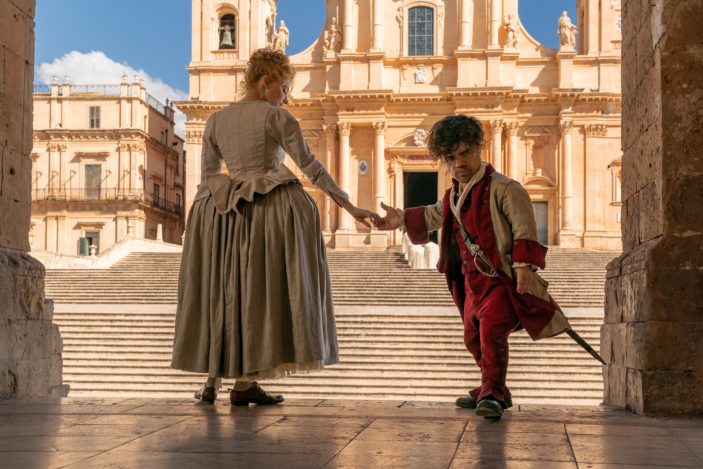 Reimagining another literary masterpiece, as he did with both Pride & Prejudice and Anna Karenina (and, to a lesser extent, the ambitious but much maligned Pan), Joe Wright‘s interpretation of Edmond Rostand‘s 1897 play Cyrano de Bergerac is a suitably lush affair that manages to reinvigorate a tried and true story, one that we have seen adapted countless times prior, with Gerard Depardieu’s Oscar-nominated role in 1990’s Cyrano de Bergerac and Steve Martin’s modernised 1987 comedy Roxanne oft considered the greatest takes on both the story and the character.

A beautiful and creatively filmed affair, Wright’s Cyrano takes certain liberties with the story, namely the titular character’s nose that is traditionally the cause of his despair.  No longer a man hiding due to his misconceptions of his appearance, this Cyrano takes a more organic approach in its representation, with the simply sublime Peter Dinklage bolstering the cinematic representation of little people in the process.  An actor in the role thus far has played the role with the assistance of a fake nose, something he’s able to take off at the end of the day.  Dinklage’s stature and it being tied to his character’s woes has a more lived-in mentality, though to the credit of screenwriter Erica Schmidt, when it comes to the romance between himself and his beloved Roxanne (a delicate Haley Bennett), his size never proves an issue, more that she views him as a friend due to their extended years of knowing one another.

Confiding in Cyrano that she has fallen in love with the kindly Christian (Kelvin Harrison Jr. in an absolutely charming performance), despite having never spoken to him, Roxanne calls for his help in aligning their destinies.  Cyrano, unable to turn down her request, begrudgingly agrees, later learning that Christian’s feelings are mutual, but the poor lad’s tongue-tied ways means any attempt at courting Roxanne will fall short.  The solution? Cyrano will write letters as Christian, allowing his true feelings to be spoken.  Yes, there’s a level of deceit in this plan – Rostand essentially created the original tale of catfishing with such a story – but it’s one we have accepted throughout the play’s history, and, wisely, the friendship between Roxanne and Cyrano is presented as one that feels like she would genuinely fall for him, whilst Christian, so often written as a more mindless character, has an openness to him that is far more sympathetic than what we usually receive from such an archetype.

As a tragic drama, Cyrano is quite the beautiful film to behold.  As a musical though, it’s perhaps less successful than genre enthusiasts may be expecting.  With the last year serving as one of the strongest for musical releases, you’d be forgiven for thinking this would similarly follow the likes of In The Heights and West Side Story in terms of grand set-pieces.  Wright’s take is a little more understated though, making the numbers more an extension of the dialogue, rather than grand show-stopping efforts that revel in intricate choreography; though, that’s not to say Cyrano doesn’t impress with its intricate weaving throughout.  It makes sense that a narrative detailing a non-traditional relationship would adhere to a non-traditional representation, but the more conventional audiences best be on guard that so much of Cyrano is a heart-breaking affair, with the soundtrack offering no reprieve.

Whilst you won’t necessarily be walking away from the film with its musical cues on hand, Dinklage’s performance – his expressive, sad eyes telling more than dialogue ever could – is one for the ages.  He’s inherently sweet just as he is bitingly savage to his detractors, and the leading man status is one that more productions should extend his way.  A film for the period piece fans and appreciators of sorrowful romances, Cyrano finds the beauty in its muted delineation.

Cyrano is screening in Australian theatres from February 24th, 2022.