Film Review: Bosch & Rockit is a spirited and emotional film that succeeds off its own scrappiness 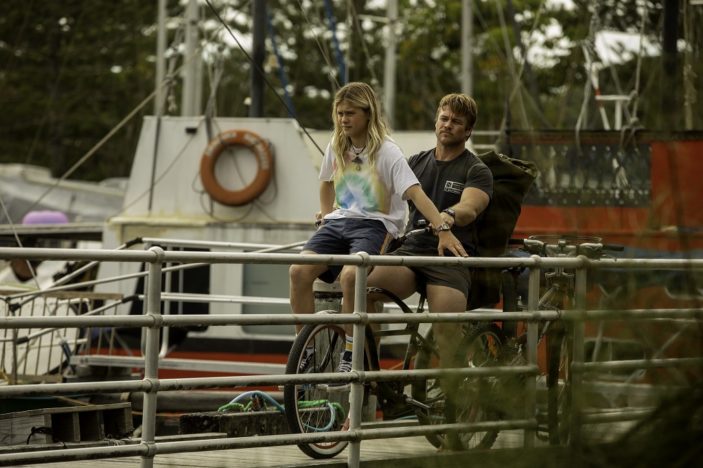 A meditative presence, a sometimes-actor, and now writer/director, Tyler Atkins seems to revel in the difficulty of categorisation.  And it’s that loose scrappiness that shapes his feature-length debut, Bosch & Rockit, a spirited and emotional film that’s equally as uneasy to singularly designate.

Based on Atkins’ own childhood, the film flirts with multiple genre temperaments over the course of its 102 minutes, though the relationship between its titular duo stands firm; tween Rockit (commanding newcomer Rasmus King) and his unreliable, though no less loving father, Bosch (Luke Hemsworth, shining in a role that makes you wish he was as prominent a Hemsworth as his brothers, Chris and Liam).

Set in the 1990’s – which helps the film when the duo are evading the police forces set upon them due to Bosch’s less-than-savoury criminal past (his sizeable marijuana plantation serving as a narrative push) – the film gorgeously utilises its Byron Bay setting as young Rockit lives somewhat naively under the assumption that his care-free father will make good on any of his promises, and that the separation between his parents is only temporary.

King plays the young lad with a genuine truth all throughout, seemingly incapable as a performer of turning in a false note.  We feel for him at every turn whenever he’s let down by his man-child father (though Hemsworth oozes enough charm that you buy his easy sell every time), and so his acts of defiance or thievery never earn anything from its audience other than acceptance and understanding.

The heart of the film is truly their relationship, with it often soaring when it lets King and Hemsworth loose to enjoy each other’s company and bask in the paradisal imagery of them surfing; and, for once, the surfing scenes appear authentic as both actors are accomplished when in the water, with King something of a pro-surfer to boot.

It’s understandable on Atkins’ account to plump up the film with sub-plots and wandering characters too, though not all manage entirely fleshed out personalities; Martin Sacks injects himself into the more crime-drama aspect of the story, making his presence felt as a corrupt officer whose ultimatum offer to Bosch sets the wheels in motion for the panicked father to go on the run; Isabel Lucas, though a calming light in the oft-hectic nature, unfortunately doesn’t move beyond window dressing as Bosch’s travelling romance; Savannah La Rain, however, proves a worthy companion to Rockit as Ash-Ash, a similarly-aged teen whose holiday friendship with the ever-growing tyke develops into a genuine relationship that assists in his own advancement as he learns to become self-sufficient following one too many let-downs.

As an interpretation of Atkins’ own childhood, Bosch & Rockit is forgiven for perhaps indulging in a few too many lingering sequences.  There’s a beauty in all the imperfections on hand here, yet the film manages a certain polish too that means it never looks like the made-on-a-shoestring-budget-without-government-assistance production it actually was.  Bittersweet and dreamy, this duo’s journey is one that showcases a universal truth, even if it has been conducted for personal, reflective reasons.

Bosch & Rockit is screening in Australian theatres from August 18th, 2022.