Film Review: Blowback is a disposable but watchable actioner that breaks no new rules within the genre 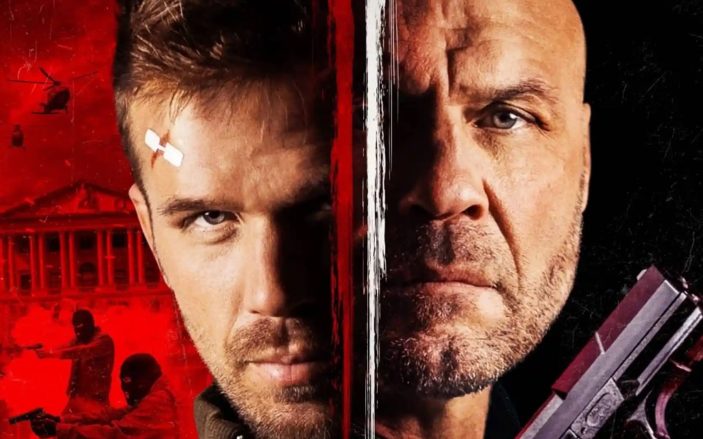 It was only a matter of time before crypto currency became something of a talking point in films, and in Blowback, an incredibly generic heist actioner, it’s a point of interest for wronged pretty boy Cam Gigandet as he tries to get out alive from a plan that, wait for it, goes fatally wrong for all involved.  Could we have seen that coming?

I’m assuming director Tibor Takács (who has predominantly cut his teeth in the television movie field) and screenwriters Matthew Eason, Robert Giardina and Robert Edward Thomas were hoping we weren’t as clued in as to predict as such, with Blowback playing to every beat we’d expect, seldom offering up even a distracting set-piece to keep us on board.

That being said, as many beats as it is hitting, there’s an odd watchability to Blowback – perhaps it’s kind of inexplicable – with Gigandet’s persevering rideshare driver, Nick, hoping to pull off this latest heist in order to make enough money to pay for his sickly daughter’s experimental treatment; see, because he’s actually sweet and doing something wrong for the right reasons, we’re on his side.

We certainly aren’t going to be on anyone else’s when looking at the motley crew assembled to help Nick pull off such a plan.  Especially not Jack (Randy Couture), the wild thug of the group who has shacked up with Nick’s ex and, despite his seeming good word, has traitor written all over him.  When we hear such instructions as “Nobody gets hurt” and “Stick to the plan”, we know the opposite is true, so Nick being injured isn’t remotely surprising, nor is his eventual work with the law enforcement investigating the heist; again, sweet Nick is more than willing to co-operate with everyone involved if it just gets him enough to save his daughter. Awww.

There’s very little to Blowback overall, with the double crossings and tech aspects of the heist failing to intensify proceedings.  There’s no need to even pretend that Couture will be anything other than the ultimate villain either, and hoping to inject some emotional investment with the addition of Veronica (Michele Plaia), Nick’s aforementioned ex (and Jack’s main squeeze), feels more like a shoehorned narrative placement for the sake of trying to expand her presence beyond being eye and arm candy.

Where it does work admittedly is with Nick being realised as a loving, determined father first – that’s all the emotionality the script needs – and Gigandet does the best he can with completely undemanding material.  He and his on-screen daughter don’t particularly give off that dynamic visually, but had the film leaned more into their relationship and Nick’s ultimate desperation and determination in saving her, it might’ve been more than the standard VOD fare we’re ultimately given.  Disposable but watchable.

Blowback is screening in select theatres, digital and On Demand in the United States from June 17th, 2022.  It will be available to rent and/or buy on DVD in Australia from August 3rd, 2022.