Film Review: Bliss is heavy on ideas but light on execution 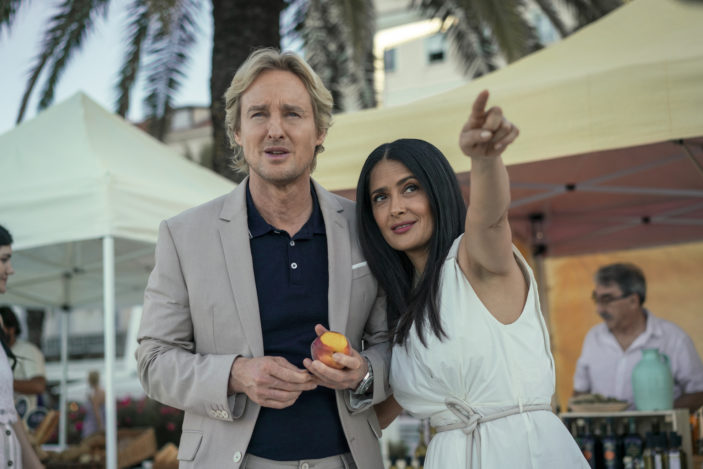 A science fiction film dealing with the powers of telekinesis and virtual reality, and starring Owen Wilson and Salma Hayek for good measure, Bliss is heavy on ideas but light on execution as Mike Cahill‘s ambitious outing takes only mere minutes to fall apart at its artificial seams.

Wilson headlines as Greg, a supposed biggish shark in a company known as Technical Difficulties.  From the moment we meet him it’s evident that there’s something off in his world, and when he’s called – rather aggressively – into his boss’s office, we are already predicting the outcome of the conversation.  He’s fired, yes, but, in a darkly comic movement that you wish the film adopted more of, he startles his boss just so that they stumble back and die from the head trauma caused in their weak footing.  It’s sudden and a bit bizarre, and it seems like Bliss may be something of a nasty-enough feature that could get by on committing to its black heart.

Hiding the body in a panic – where Greg decides to hide the body is even quite amusing in itself – and legging it to the tavern across the street to decipher just what took place, the introduction of Hayek’s wild-haired, cleavage-baring Isabel obviously grabs enough attention and it’s here that she lays out the narrative hook of Cahill’s misconceived script: She and Greg are the only two real people who exist in the world Greg knows as his own, with everyone else simply a computer-simulated creation.  Yes, it’s like The Matrix, just not nearly as interesting or kung-fu driven.

Whilst the idea that Cahill wants to execute is wild enough to be a fascinating narrative, he injects too many elements that ultimately start fighting one another, resulting in a hazy story that ends up being too disorientating for its own good.  Given that Greg is dealing with a divorce and the detachment from his daughter, Isabel is homeless, and the two snort blue and yellow magic crystals in order to journey out of this so-called hallucinogenic world, the idea that Bliss is just a metaphor for mental illness and the dangers of addiction is one that, whilst valid, is never explored enough.

There’s a world-building temperament here that suggests Cahill has the creativity to form something unique, and when Bliss is enjoyably off-kilter it’s promisingly entertaining, but its ambition can’t outweigh its slackness in creating a cohesive account.