Film Review: The operatic, obscene vision of Babylon is a welcome reminder of the boundaries cinema can push 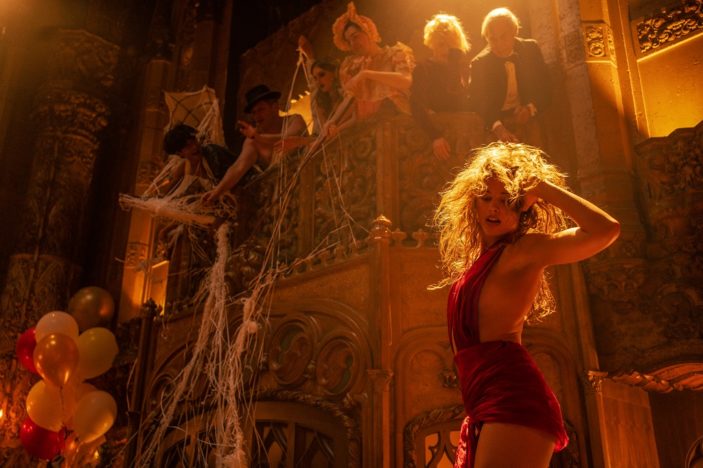 An elephant graphically defecates on its unsuspecting handlers, before stomping about in an uneven state amongst a storm of fornicating bodies.  An aspiring actress urinates on the face of a willing movie star in a coked-out stupor.  A tuxedoed lounge singer seductively croons about petting her girlfriend’s genitalia.  A party reveller bounces around on a penis-shaped pogo stick, one that explosively ejaculates on a swarm of depraved on-lookers.  And this is before Damien Chazelle has even dropped the title card of Babylon, a spectacularly long, grossly indulgent, hilariously vile ode to cinema that stands as the filmmaker’s most ambitious and divisive project to date.

It’s overwhelming and obscene – to say the least – but it’s unlike anything you’ve seen, and however you personally feel about Babylon‘s tonally jarring narrative, it’s impossible to denounce Chazelle’s operatic vision.  All 190 minutes of the film are undeniably lavish as they depict the fraught transition from the silent movie era to the “talkies”, a time when a star’s voice could ultimately make or break them, and though it’s obvious the La La Land director has a burning, overflowing passion for the art of filmmaking and all its facets, Babylon is equally devoted to the grime and vomit-laced dirt that goes hand-in-hand with projecting the shine of the Hollywood system.

Encapsulating both the beauty and the beastly of the industry is Babylon‘s central “It” girl, Nellie LaRoy, played to intoxicatingly manic perfection by the epitome of an actress with “It”, Margot Robbie.  Nellie, a character whose cues stem from silent film sensation Clara Bow, literally crashes into the film’s frame announcing herself as a star, even though she’s yet to film a picture; “Honey, you don’t become a star, either you are one or you ain’t”, she purrs in a New Jersey inflection that’s practically become the Australian talent’s staple vocal tone, after her equally scene-stealing turns in Wolf of Wall Street and variety of appearances as Harley Quinn.

She over-powers every frame she’s in, summoning us an audience to bask in her charismatic afterglow, and it’s because of her drawing nature that we completely understand why Manny Torres (Diego Calva, a knockout) declares his love for her within minutes of meeting her.  Manny is essentially our eyes through which we experience Babylon‘s debauchery, a Mexican immigrant who wishes to be a part of something bigger, and through his own willingness – and a little bit of wrong place, right time – climbs the studio system off both his friendship with the similarly-rising Nellie and the dashing, but troubled Jack Conrad (Brad Pitt), who he drunkenly recruits and implicitly trusts.

Whilst the eventual last hour of the film is understandably where viewers might lose their own grip on Chazelle’s grand storytelling mentality – when Tobey Maguire arrives on screen, things take something of a disturbing turn, though the closing shots of various cinematic images speaks to his own orgasmic love of the medium itself – there’s an impressive hold of energy maintained that most other films wouldn’t even dare to attempt.  And within that energy of both Chazelle’s ambition and Robbie’s Oscar-worthy performance are examples of the dizzying heights possible when making movies, two set-pieces of which stand as Babylon‘s grandest moments.

The first tracks Nellie’s a-star-is-born moment simultaneously with Conrad’s latest war picture, both shooting on a rag-tag studio backlot where rules and common sense don’t apply – just as long as you get the shot at the end of the day.  A violent battle scene where extras may or may not be being slaughtered for real intercut with Nellie feeling up her various scene partners (and maybe flashing a breast for good measure) lean into Chazelle’s signature whip-pan camera movement, which, in turn, locks us as an audience into willing submission as we can’t – nor want to – escape the feverish frenzy of each movie-making moment, both of which come to an ultimate calming standstill; Pitt’s Conrad finally planting a kiss on his co-star atop a hill as the sun sets, a rogue butterfly landing on his shoulder as the perfect unscripted cap off to his scene, whilst Nellie, dazzling her director take after take with her ability to cry on cue, fills the camera frame with her profile, a single tear rolling down her cheek.

The second, arguably the film’s best moment and, outside of Babylon, one of the finest comedic set-pieces to be assembled for a picture in general, is a more darkly humorous sequence.  One that brings to mind Chazelle’s own Whiplash and its rehearsal room sequence, where Nellie’s occasional missing of her set mark, the delicacy of the newly-designed microphones and their ability to pick up the slightest of sounds, and a camera engineer stowed away in a box that’s increasingly heating due to a “hot set” temperament results in an anxiety-ridden environment powered by a volatile P.J. Byrne (dynamite as an assistant director) and masterfully edited by Tom Cross (a Chazelle regular who has also put his touches on The Greatest Showman and No Time To Die), and furthers Chazelle’s own commentary on the brutality of the Hollywood system and how everyone is ultimately expendable if it momentarily equals “forward thinking” success.

Given just how ambitious Babylon is, and whether or not you view its love-letter-to-cinema mentality as self-indulgent or enrapturedly-portrayed, again, will sway your overall opinion, its detractors have every right to view Chazelle’s narrative as, perhaps, sporadically messy and unbalanced.  If it achieves what it is clearly reaching for will remain a personal reactive response, but, for what it’s worth from my perspective, more films should be as bombastically bold as Babylon.  It reminds audiences of the boundaries cinema can push, and once I came down from the grand, shocking high that is this film, I realised that that euphoric feeling wasn’t a temporary reaction to Babylon‘s kinetic excess.  This is beautiful, passionate storytelling and filmmaking.  It’s what genuine lovers of cinema deserve.  And, hopefully, its lack of monetary success won’t sway studios from continuing to believe (and fund) in Chazelle’s unmatched vision.

Babylon is screening in Australian theatres from January 19th, 2023.