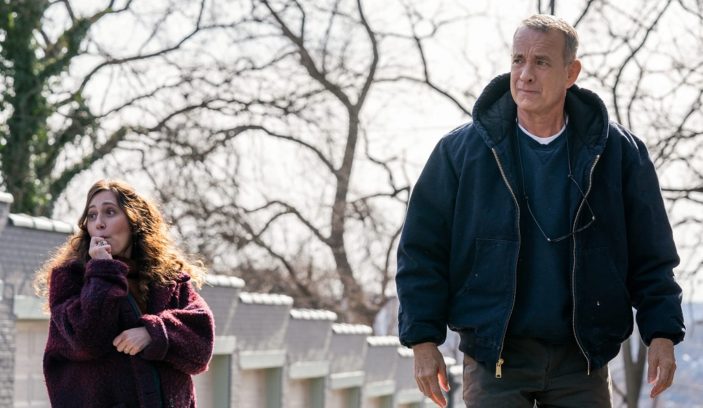 After adopting a not-so-easy to digest accent and exaggerated acting style in Baz Luhrmann’s divisive Elvis, and whatever the hell that adaptation of (not Guillermo del Toro’s) Pinocchio was, America’s loveable dad has returned for another of his committed, affable turns in Marc Foster‘s A Man Called Otto; which is rather ironic given how much of a grump his character is.

An adaptation of the Swedish novel “A Man Called Ove”, which itself was transferred to the big screen to the Swedish Oscar nominated film of the same name, Tom Hanks‘s titular Otto is a man who just wants to commit suicide in peace.  From the off, Foster’s film exists in a dark, reflective space, but considering its subject matter it’s quite remarkable how calm and gentle the film is overall.

It’s almost a given to call A Man Called Otto an emotionally manipulative film.  Similarly, its initial framing of certain stereotypical characters are enough to make your eyes roll – Mariana Treviño‘s Marisol could be easily seen as a “sassy Latina” – but there’s such a genuine nature that punctures through to create a wholly rounded person that the film is continually grounded in heart.  Whatever darkness A Man Called Otto wants to project, there’s a light always finding itself, and, somehow, the mixture works beautifully for the film, in spite of how tropey it is.

Otto and Marisol’s paths cross when she moves into the quiet neighbourhood that Otto has made sure runs without any distractions to his existence; he scowls at everyone – and every animal – that dares enter his space.  Whilst it’s easy to paint Otto as a grumpy old man for the sake of situational humour, David Magee‘s script gives him reason.  In the mourning over the loss of his wife, Otto has decided he no longer wants to live without her and plans to kill himself.  Momentarily jolted out of his sombreness, it’s watching Marisol and her sweet husband, Tommy (Manuel Garcia-Rulfo, instantly charming), attempt to parallel park that earns his ire; this is a moment that simply can’t go on without one of his disapproving retorts.

Wouldn’t you know it though, Marisol doesn’t have the time for Otto’s sourness.  Both she and Tommy treat him with the love and neighbourly agreeance they believe all people should be afforded, with Marisol in particular asserting herself in Otto’s life, offering him home-cooked meals and joining him on his walks.  Soon, in expected narrative fashion, Otto’s icy façade starts to melt and, maybe, living without his wife isn’t as unbearable as he imagined.  It’s a familiar temperament that doesn’t exactly set the film apart, and because Otto does eventually reveal his heart and true nature, Hanks’s “against type” casting isn’t as unexpected as people may presume.  That’s certainly not a negative against Hanks though, as when he is asked to lean into Otto’s abrasiveness he goes all the way in.

Whilst Foster, who has an eclectic career as a director, ranging from Monster’s Ball to Quantum of Solace and World War Z, is never above obviously tugging at our heart strings – Otto’s backstory with his wife (a wonderful Rachel Keller) is designed to stir emotions within its viewers – Hanks and Treviño deliver such wonderfully calibrated performances that anything seen as overtly saccharine is softened by their dedication.  There’s a joy and a pain to Otto that Hanks so organically realises, and Treviño matches him at every turn as she elevates Marisol off the page with her wit and belief in the goodness of others.  Hanks may be the promotional credit, but the film ultimately belongs to Treviño.

Occasionally cliched in its serving of other characters there primarily to assist Otto on his road to recovery, A Man Called Otto doesn’t entirely escape being somewhat banal throughout.  But, in the film’s favour, its narrative practically demands such trite inclusions, and because both Hanks and Treviño remove their archetypal boundaries and create such intricate characters through generous performances, A Man Called Otto earns its big screen recommendation.  Smaller stories aren’t always afforded such, and in these trying times a little theatrical support goes a long way.  It’s what Marisol would do.

A Man Called Otto is screening in Australian theatres from New Year’s Day, January 1st, 2023.  It will be theatrically released in the United States in select locations from December 30th, 2022, before expanding wider on January 13th, 2023.