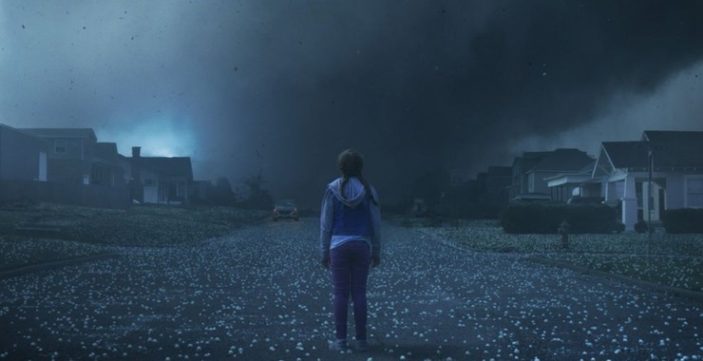 Remember those natural disaster films from the ’90s? You know, Deep Impact? Volcano? Dante’s Peak? Twister? Well, if the recent Amazon hit Greenland has whet your appetite for disaster, then 13 Minutes will also satisfy your urge.

Writer/Director Lindsay Gossling has assembled an all-star cast – including Anne Heche (to bring us back to Volcano for a moment), Amy Smart, Peter Facinelli and Thora Birch – to populate middle America to tell the story of a community ravaged by a tornado that turns their lives upside down in, you guessed it, thirteen minutes.

In the small town of Minninnewah, the story is set around the generational family farm run by Tammy (Heche) and her husband Rick (Trace Adkins), who employ undocumented workers. Their son Luke (Will Peltz) is set to carry on the family farm, but when he reveals his sexuality, he is shunned from his parents and future. The workers on the farm include Daniel (Davi Santos) and Carlos (Yancey Arias), who is engaged to the local hotel maid Ana (Paz Vega), who has scrimped and saved enough to buy their first house. On the other end of town is Maddy (Sofia Vassilie), attempting to hide her teenage pregnancy while being the babysitter for Peyton (Shaylee Mansfield), the deaf daughter of the town’s mayor Kim (Amy Smart) and weatherman Brad (Peter Facinelli).

All of these storylines attempt to shine a spotlight on middle America, investing audiences in these characters and what happens to them when the tornado finally hits. This does have various degrees of effectiveness, particularly the catastrophic situation the town finds itself in after the destruction. Most notably is Luke surviving in the storm shelter with the farmworkers while his parents, who have cast him aside, tried to stay in the house. Not surprisingly, the star of the show is Peyton, and the separation from her parents and the wild rush to find her is very engaging.

Director Gossling clearly understands this and manages to juggle all of the characters equally while not making it feel overstuffed. If you are expecting an entire disaster film with action-packed storms and destruction porn, this is probably not the movie for you. What I found really refreshing was the focus on the characters, and dedicating the first hour to understanding what life is like in Minninnewah. While the film clearly doesn’t have a large budget for special effects, what they did have was used wisely. There is a restraint used in the impact of the twister itself, with one impressive (and expensive!) shot of Peyton standing out on the road facing the full force of the twister.

The film’s score from Ariel Marx is moody and melancholy. As each story of the individual character is told, there is a strong undercurrent to the tone that connects with the visuals. As the storm rolls in and swells, the score slowly builds to a fever pitch, reflecting the hope that the town needs when the dust settles and the rebuilding begins.

Although this is far from a top tier disaster film, it does switch up the formula by putting substance over style, with a detailed look into middle town America and the current issues they face. The storm feels like a reflection of these issues crashing together, forcing the community to unite, put aside their differences and rebuild. If you are looking for an explosive action disaster film, this is not for you; if you like a layered story with your disaster like me, then 13 Minutes is the perfect film for you.