Boulevard! A Hollywood Story is a fascinating look at life imitating art and the golden age of Hollywood: Mardi Gras Film Festival Review 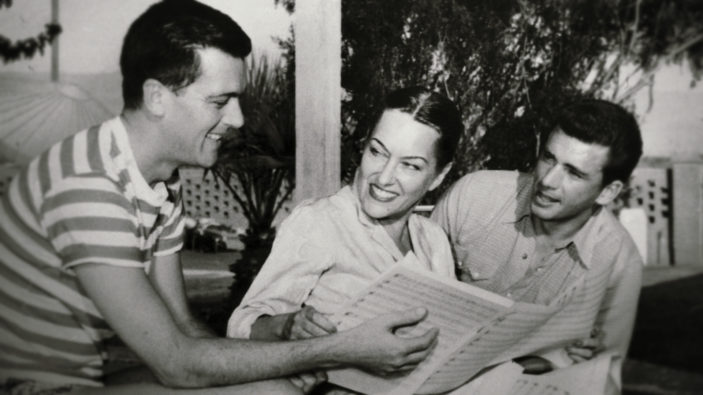 Detailing a film and its lead actress adored by the queer community, and uncovering within that connection a story so juicy it seems almost too dramatic to be true, Boulevard! A Hollywood Story is a fascinating look at the intended musical iteration of Billy Wilder’s 1950 classic Sunset Boulevard, Gloria Swanson‘s determination to see its fruition, and the two young songwriters – Dickson Hughes and Richard Stapley – who inadvertently summoned the romantic interest of their star during the writing process, despite them being in a same-sex relationship.

Following a decade of waning prominence since her move from silent films to the talkies, Swanson – despite being a two-time Academy Award nominated actress – felt a sense of career rejuvenation when she headlined Sunset Boulevard, starring as faded silent movie star Norma Desmond, a role that eerily mirrored the actress’ own professional trajectory.  Regarded as one of the greatest films ever made, and earning Swanson her third Oscar nomination in the process – one of 11 nominations the film garnered – Sunset Boulevard should have set a new course for the star, but instead only seemed to conjure script offers featuring characters that, as she described, “were pale imitators of Norma Desmond.”

If she was going to star in a role that shared qualities of Norma, it might as well be Norma herself, so Swanson, initially approached by Hughes and Stapley for a musical they had written specifically for her, persuaded the duo to change their vision and write a musical based on Sunset Boulevard, allowing her the opportunity to recreate Norma, but breathe new life into her at the same time.

In an odd case of life imitating art, Swanson, in her 50’s, started falling for the young, 20-something Stapley, much like her Norma did with William Holden’s Joe Gillis in Sunset Boulevard.  Stapley being in a relationship with Hughes meant the infatuation wasn’t mutual, though it luckily didn’t derail the production of the musical which, without spoiling too much of Jefrrey Schwarz‘s consistently engaging documentary, was completed but never given the due it deserved.

Stapley’s eventual film career as “the poor man’s Clark Gable” and the sting that was Andrew Lloyd Webber’s successful Broadway adaptation of the film are also detailed throughout Boulevard!, both footnotes themselves that would make it into the narrative of “Swanson on Sunset”, a cabaret act that Hughes created in the 90’s which re-purposed many of his original songs and outlaid the troublesome history of his and Stapley’s intended production.

Though there’s almost too much drama to contend with, Boulevard! is so affectionately created by Schwarz, telling of a musical that deserved more love than it received and shining a light on an actress who was a much more compassionate figure than her showy roles suggested.  As Norma Desmond so famously stated to “all those wonderful people put there in the dark”, Schwarz deserves a hand for bringing the house lights up on a deliciously bizarre story.