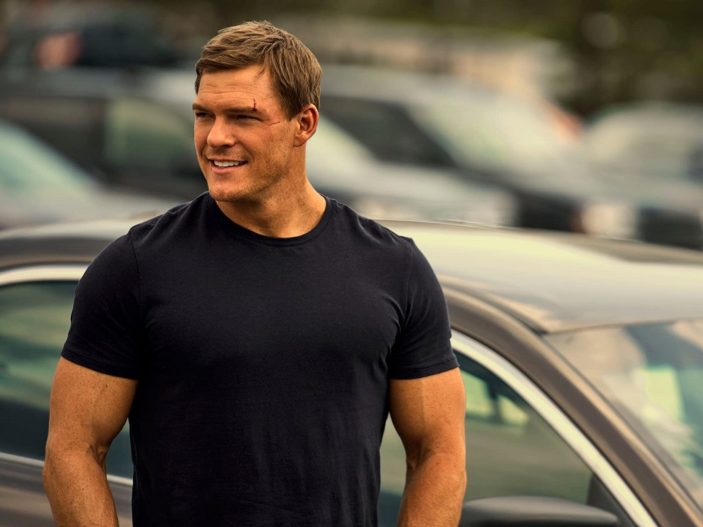 When Lee Child‘s novel creation Jack Reacher was first introduced to audiences in a motion-captured capacity it was in the form of Tom Cruise’s filmic duo of Jack Reacher (2012) and Jack Reacher: Never Go Back (2016).  Whilst Cruise’s action capabilities have never been questioned, the fact that he was chosen to portray such a character as Reacher drew much ire from those who have poured through the pages of Child’s 27-strong book series.  Described as being 6 feet 5 inches, weighing up to 150 pounds, with a 50-inch chest – in Never Go Back he’s penned as having “a six-pack like a cobbled city street, a chest like a suit of NFL armor, biceps like basketballs, and subcutaneous fat like a Kleenex tissue” – he was a character considerably unlike the not-entirely-imposing Cruise.

Thankfully, the character has been rectified for his next adapted go-around in the form of Alan Ritchson, a much more aesthetically appropriate actor whose large frame, intimidating arms, grated abs, and steely stare mean Reacher, as both a character and the series, grounds itself with a sense of realism whilst simultaneously leaning into the dry humour that comes with the actor’s delivery of someone who’s little talk and all action.

For this first season – comprised of 8 episodes – there’s an almost-origin state of mentality to the narrative.  Whilst we aren’t inundated with where the character has come from, we are fed enough backstory to understand who he is.  Though he’s almost immediately in handcuffs within the first episode’s few opening minutes, we are immediately on the character’s side, and when the mystery unfolds as to what will occupy these 8 episodes, we are instantly intrigued as series creator Nick Santora (no stranger to genre television, having penned and produced the likes of Scorpion and The Fugitive) forms a murder-centric storyline that leaves the small Georgian town’s police chief (Malcolm Goodwin) and sole female officer (Willa Fitzgerald) in desperate need of Reacher’s help; even though as a hulking out-of-town presence who has arrived just as a series if brutal murders have taken place means he’s understandably suspicious.

The series has a lot of fun in building a web of villainy and intrigue around the corruption taking place within the city, and there’s a certain old school charm to the way almost every episode (which usually run between 42 and 55 minutes) ends on a cliffhanger note.  If it wasn’t for the splashes of quite alarming violence and occasional nudity – I mean, if you look like Ritchson it makes sense to get his kit off where possible – you could almost sit down with the whole family and solve the mystery together too, but, alas, Santora has an assured view of the adult mentality he wants to project with the series; something he will undoubtedly continue, and possibly enhance, with the announced second season.

With so many novels to choose from, the future of Reacher is endless.  Whilst some viewers may be wary going into the series believing it’s somehow aligned with the more general audience-friendly temperament of the Cruise-led films, they can be assured that this iteration of the character is a more intimidating, dominant, yet likeable representation.  The show is tightly paced, welcomingly brutal, sporadically witty, and surprisingly sexy in a subtle fashion.  Worth the binge.

Whilst it’s absolutely fair to say that, yes, Reacher can be streamed on Prime Video, the video and audio quality of this Blu release and the supplemental features – especially for fans of the show – earn the disc a certain edge over its streaming counterpart.  At a collective 30 minutes, Reacher provides a duo of behind-the-scenes features that give you an inside-look into the making of the show itself (Realizing Reacher) and an interview with Lee Child (Novelistic) that’s particularly in-depth as he discusses the character himself.

Reacher: Season 1 is now available to purchase on DVD and Blu-Ray through Kicks.