AFI Fest Review: The Boy Behind the Door is a ruthless, taut thriller that benefits from its uncomplicated narrative and daringness to place children at its centre 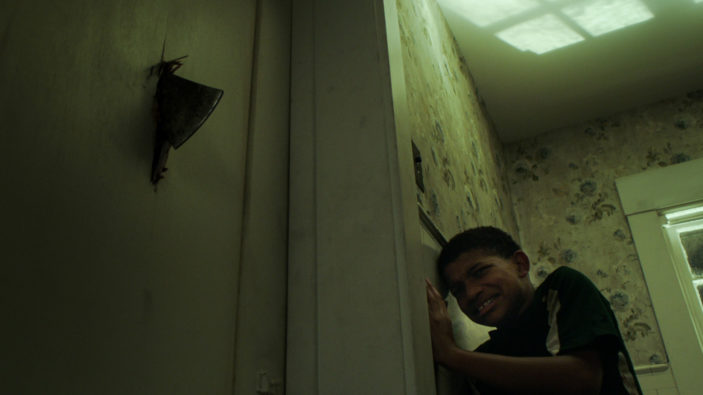 Without so much as letting us settle into our seats, The Boy Behind the Door announces itself as a relentless piece of cinema within seconds of its starting time.  This is harrowing, unbearably suspenseful storytelling, with first time directors David Charbonier and Justin Powell plunging headfirst into thrilling territory, seemingly unafraid to tackle upsetting material in the process; if the subject matter of pedophelia is something of a trigger, best you be warned.

The few moments of levity we’re afforded as an audience arrive early in the film where inseparable besties Bobby (Lonnie Chavis, an absolute star in the making) and Kevin (Ezra Dewey) ponder their future; they march to the beat of a “ride or die” mentality, making plans to escape to the Californian coast when they’re able to.  As they fill the time throwing around a baseball awaiting their latest little league match, a stray toss sends Kevin into the surrounding forestry to search for their ball.  When he doesn’t return instantaneously, a concerned Bobby goes looking for him, and when an unseen assailant grabs him from behind and renders him unconscious, The Boy Behind the Door refuses to let us out of its grip for the remaining 75 minutes.

Awaking bound and gagged in the trunk of a car, Bobby manages to free himself and, like any smart-thinking could-be-victim, makes a run for it the first moment he can.  But given the audible screams of Kevin, Bobby chooses to return to the expansive, secluded estate they have been taken to and searches for the friend he swore he’d never leave behind; having the film’s main character be a pre-pubescent young boy assists the film in playing to some of the home invasion genre tropes that usually evoke frustration.

Though, as much as The Boy Behind the Door is a home invasion movie at its most literal core, Charbonier and Powell flip the narrative by having the “invader” be young Bobby, tiptoeing around an unfamiliar blueprint, trying his best to evade the kidnappers at every seated-edge moment.  And whilst he does occasionally lean into the clumsy temperament that so many hopeful escapees adopt in these type of films, his young age means it’s more forgivable when he doesn’t go for the easiest exit or available weapon; that being said, he proves alarmingly capable at times, even if it’s unintentional.

Given the film’s bravery in showcasing violence towards children, it’s a testament to Charbonier and Powell that they toe the line as carefully as they do in revealing the rather repulsive motivation behind the kidnappers’ actions.  It’s vastly unpleasant (even somewhat racially motivated) and it proves effective in its queasiness but it never veers into explicit territory, which isn’t always the easiest journey to navigate.

Anything but a safe debut from a duo of filmmakers who more than prove their status as “ones to watch”, The Boy Behind the Door is a ruthless, taut thriller that benefits from its uncomplicated narrative and daringness to place children at its centre.  Bolstered by a deeply nuanced performance from young Lonnie Chavis, Charbonier and Powell’s dark scarer manages to simultaneously unnerve and entertain with a violent glee that, like the rest of the film’s taboo-bordering material, packs just enough of a punch to make a lasting impression rather than alienating on arrival.

The Boy Behind the Door is screening as part of this year’s AFI Festival, which is being presented virtually between October 15th and 22nd 2020.  For more information head to the official AFI page.