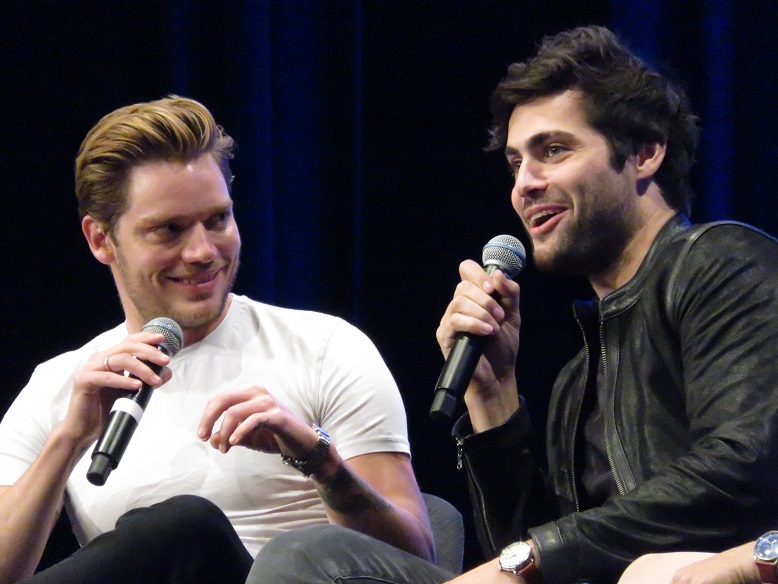 When the end of September rolls around you can be certain of two things, the end of the NRL/AFL football seasons, and Oz Comic Con Sydney. Once again one of Australia’s biggest pop culture events rolled into the International Convention Centre (ICC) where fans can meet some of their favourite celebrities from film and television, dress up in cosplay, immerse themselves in gaming, or buy some nerdy merchandise from Australian artists and vendors.

The Sydney film and tv guest lineup in particular had teenage girls buzzing with two of the lead stars from Shadowhunters: The Mortal Instruments making an appearance across the weekend. British actor Dominic Sherwood, and American Matthew Daddario who play Jace Herondale and Alec Lightwood respectively. With question and answer panels being held on both Saturday and Sunday, we took a leap into this fandom and sat in on their panels. Here are some of the things we learnt from their Q&A, and some gratuitous photos of course.

Look let’s not deny it, us Aussies love having a lend of the tourists when they come to visit. And a perennial favourite is convincing them that Drop Bears are real. I mean it already helps that Australia has a reputation for wildlife that can kill you, so it’s not that much of a stretch. But Dominic Sherwood was told by a fan to beware of the Drop Bears and he genuinely believed that they were real ….. That is of course until some kind hearted soul told him the truth.

Season 3B is going to hurt

Both Dominic and Matthew were quick to not sugar-coat the back half of Season 3, which is still yet to air. Currently fans are waiting for the closing 12 episodes that will finalise the show. Matthew admitted that filming a lot of the scenes, despite being acting and that it’s fake, it all took an emotional toll and was exhausting. “There’s a lot of suffering, everybody will end up miserable” says Matthew, “Jace’s love of his life is dead. Poor Jace. Unless you don’t like Jace, then you’re gonna love it.” Dominic jokes. Fans will have to patiently wait it out for the episodes in order to see how everything pans out.

The last day on set

Without giving anything away and just in some nice general terms, “It was bittersweet, we knew that it was coming, we knew it was the end. But it was really nice to say goodbye to all these people, cast and crew, that we had worked with for the past three years” says Matthew. “That last shot we filmed, I can’t even say anything coz even describing the emotions it might give it away, but man it’s something else” says Dominic.

Dominic Sherwood has a crippling fear of mannequins

When asked what their fears are, Dominic Sherwood reveals he has a crippling fear of mannequins and dummies. “There was one episode where they stuck me in a grave, at midnight, with a dummy. Then to make it worse they were like “oh we can’t see it’s face properly can you wipe some of the dirt off its face?” It was like they had put my worst nightmare down on paper, and then made me act it out”

Both Dominic and Matt expressed gratitude for the love and support of the Shadowhunters fan base and the passion behind trying to save the show.  “We were mostly surprised, not so much by the fervour or aggressive organisation, it was the kindness of it and the generosity by raising money for charities was wonderful” says Matthew.  “Australia is the place that I’ve seen the most people cosplaying as Shadowhunters, so Australia by far, round of applause to you” says Dominic. Despite the campaign not achieving its intention, it has still enabled fans to rally around the show and express their love for it and its characters.

Dominic Sherwood and Matthew Daddario appeared as part of the Oz Comic-Con lineup for Brisbane and Sydney 2018.

To read our interview with Dominic Sherwood, click here.