Why did Star Wars: Galaxy’s Edge only launch with one new ride at Disneyland?

When Star Wars: Galaxy’s Edge (also known simply as “Star Wars Land”) officially opened its doors to the public on Friday at California’s iconic theme park Disneyland  – strictly to those who had reserved the privilege in advance – some may have been surprised to discover that after all that hype, and all those years of waiting, the park’s first new land since Toontown in 1993, only had one new ride – Millennium Falcon: Smugglers Run.

I had the opportunity to walk around the park’s fictional recreation of the planet Batuu in the third day of public access, as Stormtroopers literally walked the streets to ensure everyone had their proper accreditation to be there (which, is cool in itself beyond words). The first thing that’s obvious is that the attractions in this land go far beyond just a single ride. The expansive land – 14 acres to be exact, the biggest expansion in the park’s history – is filled with hidden secrets, characters to interact with (including an actress who both looked and sounded like Rey to incredible accuracy), and a variety of stores that will be something of a wet dream for Star Wars fans. You can even build your own droid or lightsaber in some incredible stores (though they’ll set you back $100 and $200, respectively). This level of detail, with new cast members and interactivity is astounding. But there’s one other thing you’ll notice – the land’s second ride, Star Wars: Rise of the Resistance, is sitting there in plain sight.

Right near the most Western entry of the park, the future path to line up for the ride is already visible, in the Resistance area of the planet. It hasn’t been boarded up, and cast members stand in front of the future ride’s entry to explain the area is not yet ready for our consumption. So why is it it that a ride that, from the outside, looks ready to go, has been neglected from launch?

Here in Anaheim I’ve spoken to a number of sources at the park and the word I’ve heard a couple of times is “Sanity”. While neither confirming nor denying the fact that the ride is just about ready to go, the staggered approach to the release of the rides seems less to do with the physical build, and more to do with the technicalities of the execution.

The ride is being billed – both in its promotion and in the conversations I’ve had with some of the staff here at the park – as the most complicated in the park’s history, seeming to combine technologies seen in rides like the Tower of Terror in Orlando and the Transformers ride at Universal Studios in a truly innovative way. And given the intricacies of the launch as it has been without the second attraction, it sounds like it proved an impossible headache.

Keep in mind, they already had the unenviable task of ironing out any issues with Smugglers Run; it too an unequaled technical marvel. I’ll get into the ride in more detail in a later article, but it’s likely the most interactive ride to ever populate any park, ever. So it’s something cast members are still wrapping their heads around. How do you convey the instructions of flying the ship without taking away from the illusion of the world you’re living in? And how do you make the load in procedure as efficient as possible?

When I rode the anticipated attraction on Sunday night, as lines started building up, you could tell there was some confusion in the Falcon as guests didn’t hear their colour being called, being distracted by the detail of this loving recreation of the iconic vessel. I certainly fell into that boat. Undoubtedly they will finesse this process over time. There really has never been a ride like it to model the load-in procedure – and getting to explore the Falcon is as much of the experience as the ride itself. So keeping people organised, while their curiosity is piqued, is going to be a challenge.

This also explains the park’s staggered approach to public entry. In many ways, Star Wars Land is in beta mode. The only way to truly test out the ride is to get thousands of people to ride it. But over-excessive lines and crowds this early in the piece make creating this world for cast members and guests alike fairly unmanageable. When we descended on the ride in droves for the Sunday night event, we pushed the wait time up to 90 minutes (with the single rider queue around half that), and lines went far beyond the entry doors. This physically kept photographers from getting pictures of guests in front of the Millennium Falcon, and caused a lot of confusion. Having been keeping an eye on the lines since then through the Disneyland app, I haven’t seen it go above 30 minutes (though there have been earlier reports to the contrary). And in doing so, they theoretically ensure guests have the best possible experience, while giving them breathing room to iron out the kinks. And maybe even give people the chance to ride it more than once. Which believe me, you’re going to want to do. Because you’re probably going to fail disastrously the first time (or was that just me?). 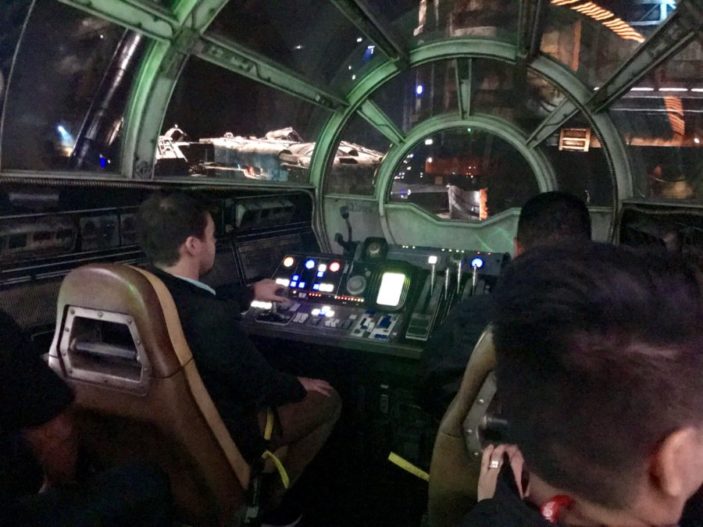 Further telling of this is that Galaxy’s Edge at Disney World at Hollywood Studios in Orlando will be opening its doors on August 29th with an identical imprint; also choosing to stagger the attractions. Around the time of the launch, at Disney’s D23 Expo, we can expect to hear more about the planned launch date for the Resistance ride – which I’m told may be same day for both locations, and will be before the end of the year – as well as the plans for the launch of Orlando’s anticipated Star Wars Hotel, which will see the brand’s imprint on the Disney Park footprint continue to expand.

Regardless of the status of ride number two, guests to Galaxy’s Edge are in for a real treat. This immersive world is done at a scale that truly gives the Wizarding World of Harry Potter – which to be fair, also launched with one completely new ride – a run for its money. It was certainly, to now, the benchmark for an interactive, immersive theme park experience. And this very well may have topped it. I know I could have spent hours longer in the park and still found enjoyment interacting with the space. 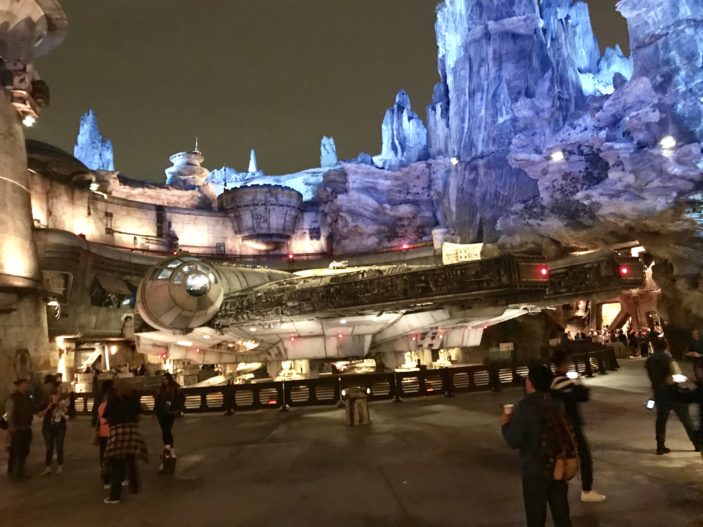 With Galaxy’s Edge, Star Wars fans have been given an unrivalled experience that will see them coming back time and time again to live out a real life fantasy in Batuu. And maybe turn over to the dark side in the process. Or at least enjoy some blue milk while at Oga’s Cantina…

For more details about Star Wars: Galaxy’s Edge, head HERE. General Admission tickets will start to permit access to the land from Monday, June 24th – just in time for peak Summer season. Until then, reservations are required.

Headline photo provided by Disneyland. Other photos by the author.