Back in 2017, I flew from Australia to the US with Hawaiian Airlines. At the time, they were the only airline offering a complimentary meal on a domestic US services. But this trip coincided with a couple of airlines bringing meal services back to certain routes – in particular the trans-continental route from California to New York.

They weren’t necessarily hot meals, as Hawaiian Airlines often offer, but it was the first shift in a return to a quality of service that had departed for domestic travellers in 2001 – alongside many other aspects of air travel; myself old enough to remember being able to sit in the cockpit with the pilot as a young passenger. And since then, we’ve even experienced a period where airlines stopped giving out free pretzels, let alone a proper meal. So where do Airlines stand now? Here’s a look at who provides free meals, what routes you get them, and what the standard is.

Delta provide Economy passengers with meals on flights between 5am and 9pm on the below routes, with a turkey & Swiss bagel or sandwich, or a “protein pack” for breakfast, a meat sandwich or “veggie combo” for lunch or Greek Mezze Plate, noodle salad or veggie combo for dinner, depending on the direction of travel. A Tillamook cheese and fruit platter is also available as an alternative at all times. Alcoholic drinks are complimentary to comfort plus passengers and $9 for regular economy passengers.

Here’s a look at the Sesame Noodle Salad served at dinner time (4pm to 9pm) on Westbound flights. 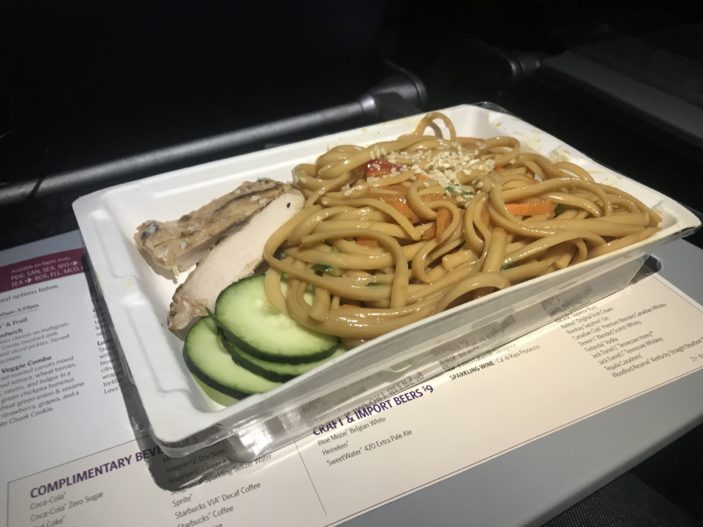 There’s also meal service with complimentary alcoholic beverages between Atlanta or Minneapolis and Hawaii. Delta connects to flights from Virgin Australia and codeshares their services. They also offer free in flight messaging on all wi-fi equipped planes, with one hour of data service for T-Mobile customers.

AA have matched Delta on their service, though they’re not nearly as expansive on the routes they offer it. As long as it’s a flight over 250 miles, you get free cookies, or pretzels and non-alcoholic drinks on all flights. Meal service is only complimentary between New York (JFK) and Los Angeles (LAX) or San Francisco (SFO), or Hawaii and Dallas/Fort Worth (DFW). Meals are either a continental breakfast box, sandwich/wrap or fruit & cheese.

The Hawaiian service is also accompanied by complimentary beer and wine.

American Airlines connects to Qantas and codeshares their services.

Hawaiian remain the only airline to serve complimentary meals in flight for all trans-Pacific travel, with two meals served on the longer flights between Hawaii and New York JFK. From Portland to Honolulu, I enjoyed a breakfast sandwich with egg, cheese and peppers alongside a cookie and a fruit cup. And from Honolulu to LAX, I enjoyed a Ginger Teriyaki Chicken with rice, coleslaw and a cookie. On red-eye flights, you may only get a Pau Hana Snack Mix. Complimentary alcoholic beverages are available to all passengers, too. You can have a look at their latest menus HERE.

Surprisingly, as one of the big three players in the US market, United haven’t matched their competitors and don’t serve complimentary meals on any domestic services, though they do give out snacks like pretzels and complimentary non-alcoholic beverages.

No complimentary meals, but free snack and drink on every service, plus they’re the only airline to provide two free checked bags with every ticket.

If you’re in JetBlue’s premium cabin “Mint”, which is only available on select transcontinental flights, you’ll enjoy a complementary meal and alcoholic beverages. Otherwise it’s pay as you go!

And that’s the way that pretty much every other North American airline operates – be it Alaska Airlines or Canada’s major players, Air Canada and WestJet. But at least all the airlines listed here give you a free beverage, and usually some peanuts or equivalent. Airlines like Frontier, Spirit and Allegiant are among the discount carriers that don’t even offer complimentary beverages.

Do keep in mind that this is only in consideration of domestic North American travel; almost all these airlines, when flying internationally, will provide free food and beverages.