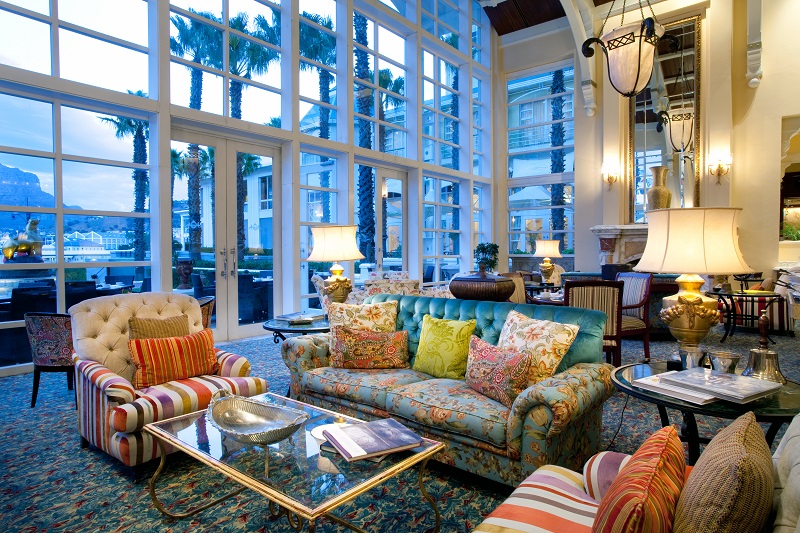 With a history tracking more than two decades, The Table Bay still shines like the brightest, most vigorous star on Cape Town’s impressively eclectic Victoria and Alfred Waterfront.

Gorgeously dressed in an impeccable façade of yellow, blue and white, its an immense feature of the waterfront’s colourful scene, screaming luxury from across the bay and making for a view just as stunning as the one offered from within.

Approaching from the waterfront, a glowing golden statue of the bay’s legendary Oscar the Seal, is surrounded by plaques reading notable guests who have made The 329-room Table Bay a temporary home over the years.

Michael Jackson, the Obamas, Charlize Theron, Chris Rock, Sean Connery – all legends who have walked through the very same grand lobby that is now forever etched into my memory. Although no name is perhaps as important to the history of The Table Bay as the eternally beloved Nelson Mandela, who opened the hotel in May 1997 when he was still president of South Africa.

It’s then worth it just to walk through The Table Bay’s soulful lobby for the history alone. For such a big, ornate space, the lobby is as warm as the enthusiastic, very down-to-earth hospitality waiting for guests. Restaurants sit on either side – the more distinct – and newer – Camissa Brasserie to one, and the more generalist Atlantic Grill to the other, home to the hotel’s extensive breakfast buffet. However, it’s the sunken lounge in the middle which is the lobby’s most valuable feature, basking in sunlight pouring in from large windows looking out to the harbour and beyond to the spectacular Table Mountain.

Despite the entire lobby feeling like it has been suspended in a time of indulgent Victorian elegance, it feels modern and fresh walking amongst the enormous artworks and plush, mismatched furniture. Character comes from beautifully preserved old maps and paintings of old ships, whipping up somewhat of a maritime theme, topping the grandeur with a beautiful sense of place.

The Table Bay is widely referred to as the best address in Cape Town. It’s hard to argue against that when you’ve got the energetic waterfront at the hotel’s doorstep.

Most immediate is the attached Victoria Wharf Shopping Centre, past which is a stretch of restaurants, touts and tour-booking stalls where you can easily lock in a helicopter ride that soars over what is easily one of the most picturesque cities in the world, or a jet boat adventure out on the water.

Further towards a defining large white sky wheel is the heart of the V&A Waterfront, where night is often one big street party with buskers and dancers out in full force.

Shops are varied and plentiful, including the creative Water Shed, a yellow coloured warehouse space turned into a dazzling display of local makers, food and drinks stalls, and a huge co-working space upstairs. It’s also near here you can check out a modest comedy cellar, listing plenty of local performers and affordable food.

Although the multi-level V&A Food Market nearby is where you’ll want to be if you’re looking for casual eats. From pork burgers and ostrich rolls, to handmade chocolates, fresh juices, and coffee from Cape Town’s famous Truth Coffee Roasting, it’s a beacon of inventive food and drink concepts organised into one incredibly trendy precinct.

If culture is what you want, the jetty-turned-museum that tracks the storied history of Robben Island is right next to the hotel. And on the other end of waterfront, a boat regularly departs for the actual island itself, opening visitors up to a humbling tour of the former prison where Nelson Mandela and others were held for years.

The exciting Zeitz Museum of Contemporary Art Africa is also a short walk, sitting on the fringes of the precinct with a unique design and outstanding localised exhibitions. African Trading Port – you can’t miss it, with all the hand-carved statues out front – is another interesting feature of the waterfront, with its half-shop, half-museum display of traditional African totems, masks and statues.

While The Table Bay is a five-star property, and a member of the coveted Leading Hotels of the World collection, amenities show their age. The outdoor pool is quite small and the attached bar is unused (at least during my stay), although the terrace on which it’s on is a lovely spot to relax. A hot tub stands in the far corner, but on my visit barely anyone would be around to use it.

There’s a gym that seems well maintained and sports a nice selection of machines, but that too could use with a bit of a reimagining, and resizing, to keep up with modern fitness spaces.

It’s no surprise that the pool and gym were hardly used though. Aside from the mild weather, there’s no reason to stay hovering around the hotel when there’s so much to see and do around Cape Town. One of them would be simply to walk through the main entrance (not facing the waterfront), across a glassed-in portico and long driveway lined with palm trees, straight out to a nearby breakwater. Watch the sunset here, and thank me later.

The Camelot Spa is said to be a distinctive part of the property, just as popular with pampering locals than the storied high tea. I wasn’t able to experience it during my stay, so couldn’t say anything beyond that.

There are plenty of dining options inside the property. Aforementioned Camissa Brasserie feels like the more upscale of this hotel’s ritzy scene, with a locally-minded menu offered in an elegant dining space surrounded by a separate wine bar and wine-tasting room. South Africa has terrific produce, and the kitchen take full advantage of that with foraged ingredients and inventive twists on the country’s favourite flavours.

The hotel’s notably large breakfast buffet attracts just as many locals as it does guests. The options here are certainly maximised, with a sometimes overwhelming choice of breakfast staples from various countries, including a substantial showcase of the bay’s bountiful seafood. There’s an a la carte menu as well, offering up a few signatures in case you wanted something more fresh.

Perhaps most valuable is the central lounge’s High Tea. It’s unsurprisingly extravagant, and fits perfectly with the hotel’s overall aesthetic, with bookings often hard to come by. Of course, South Africa’s famously light and smooth herbal Rooibos tea is a star feature.

My ocean-facing Family Room may not have come with the definitive wake-up-and-stare-in-awe views of Table Mountain looming outside of the window – with or without its puffy table cloth (thick fog) hanging low – but the size more than made up for it. For one of the lower category rooms, there was plenty of living space both in the bedroom and the attached lounge room, and the generous bathroom, which is draped in gold furnishings with a sightly marble tub distinguished by its Oscar the Seal shaped taps.

Decorative carpet could have easily looked garish had it not been for smart matching furniture, mirroring the golden hues that dominate this space. It’s the classic five-star hotel look, but there’s plenty of character in the small local-nods like a tube of gorgeous king proteas sitting on a vintage table. 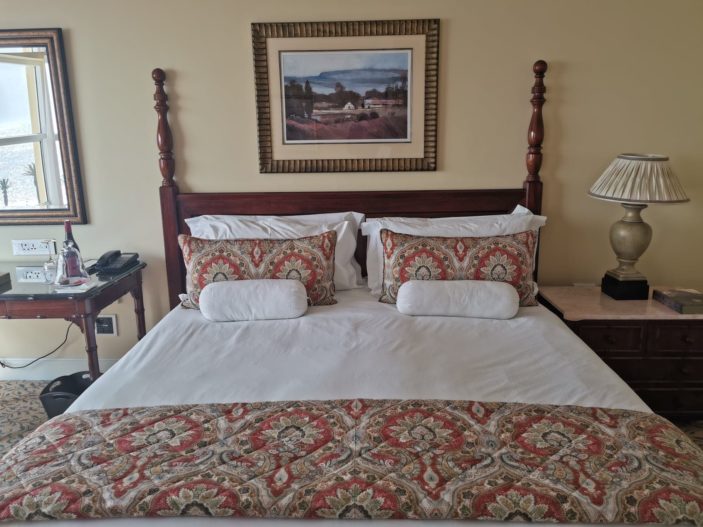 As for the bed. Would you expect anything less than supremely comfortable? A good night’s sleep is guaranteed. Plus, the large sleeper looks fantastic with its patterned pillows and matching throw, making reference to the strong Cape Malay culture that is so integral to South Africa.

Unlike many classic, vintage-minded hotels, there isn’t an overload of standalone lighting here so you won’t have to go around switching individual lamps off every time you go to bed. That may seem like a small win, but it goes a long way.

A knowledgeable concierge team, discerning when it comes to suggesting day tours and time-saving routes; an enthusiastic, efficient check-in; staff with constant, infectious smiles. It’s classic hospitality which importantly values you as a guest, rather than a number. No wonder The Table Bay has the reputation it does.

If you were to book a room during the same time I stayed (mid-September) for next year, you’d be looking at around $385AUD per night. South Africa is not an expensive city for dining and shopping, so the high price tag is a bit more attractive when you consider you’ll save money elsewhere. For one of the Leading Hotels of the World, it’s quite inexpensive as well. You’ll be paying even more if you want a Table Mountain view, but to have that defining aesthetic to wake up to every day would be worth it, if you’ve got the money to burn.

For those who are wondering (that is, who have never been to Cape Town before). Yes, the V&A Waterfront is very safe and I experienced, nor witnessed, any trouble while there. Even at night.

The writer stayed as a guest of The Table Bay. All opinions are that of the writer’s.

Feature photo supplied. All other photos by Chris Singh.