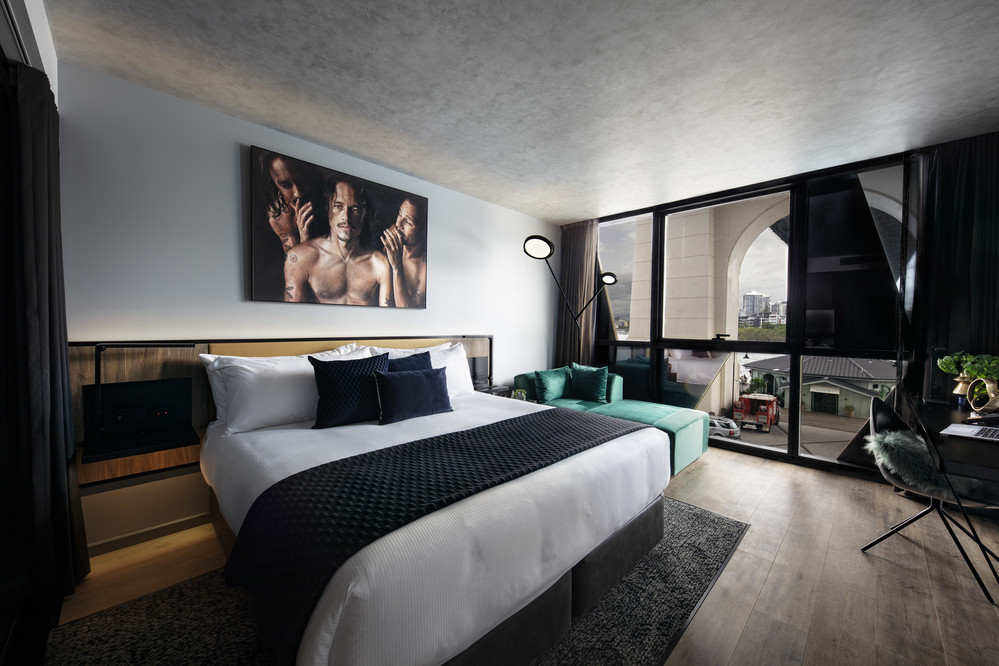 As one of this country’s most beloved modern artists, it was only a matter of time before quadruple Archibald Prize winner Vincent Fantauzzo received his very own Art Series Hotel.

The Australian hotel brand, now owned by AccorHotels, is a decade on from their first property – Melbourne favourite The Cullen – and has continually redefined their remarkable concept with every opening since, tethering each of their boutique-styled hotels to an individual Australian artist and liberally translating their works, with a focus on five-star luxury and comfort. 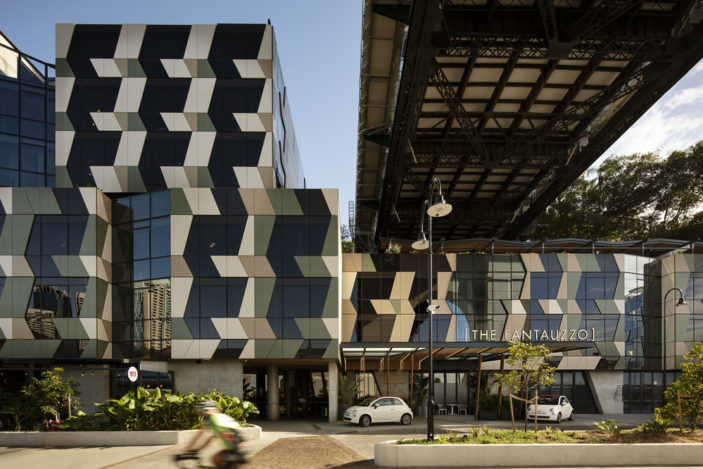 To absolutely no one’s surprise, it’s given the group another hit, but this time uses location and a darker, moodier atmosphere to elevate the brand and distinguish it amongst Brisbane’s recent frenzy of luxury openings. Said location is directly underneath Brisbane’s heritage-listed steel Story Bridge, built into the same jagged cliff face that rises over the new Howard Smith Wharves precinct; it’s spectacular.

Having the entire precinct literally at its front door means there’s plenty of value for food and drink lovers looking to explore the city’s trendiest haunt. Cocktail bar Mr Percival’s is not even a minute from the hotel’s front door, as is the lively Felons Brewery and Greek eatery Greca. The Fantauzzo holds its own with all-day Italian dining at Polpetta, particularly valuable for its breezy lunches and a la carte breakfasts, and a rooftop bar dubbed Fiume, complementing the small but beautifully designed infinity-edge pool looking over the river.

Photorealism Brings the Hotel to Life 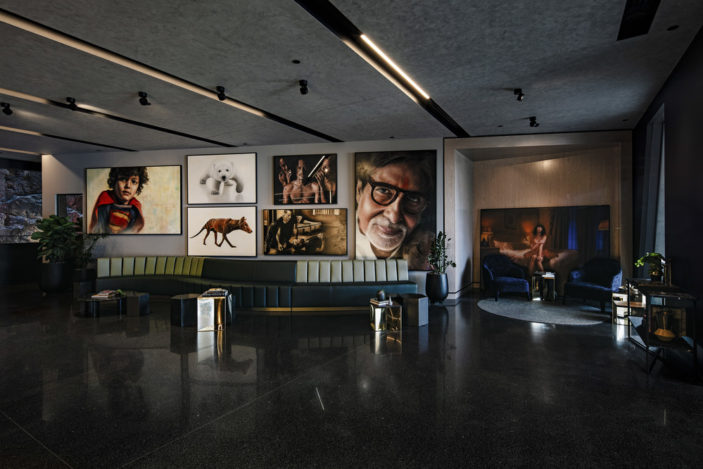 The diverse precinct is one of the finest examples of adaptive reuse in the country, giving The Fantauzzo a dramatic social scene unlike any other property in the city. And that falls in-line beautifully with the hotel’s theatrics, given Vincent’s mesmerising photorealistic works are mostly hinged on human form, illustrating – most notably – Australian celebrities such as Heath Ledger, Baz Luhrmann, Guy Pearce, Matt Moran, and Fantauzzo’s wife, actor Asher Keddie. 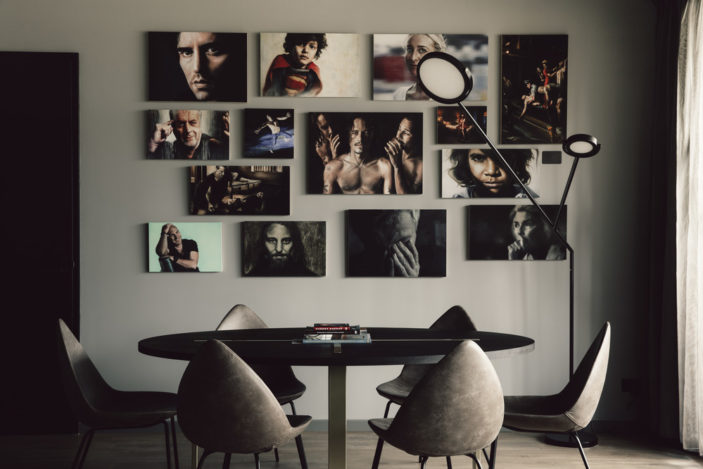 These paintings give the hotel a tremendous sense of presence, felt throughout the hotel as the immersive scenes play around with shadowy lights, painstaking detail and raw emotionality. You really do feel like you have eyes following you through these corridors, eerie but strangely comforting as you walk the line of celebrated paintings, each as compelling as the other.

As one of his most famous subjects, Ledger appears in multiple works throughout the hotel. The late actor takes on his iconic Joker role in one of the hotel’s biggest portraits – right in front of the lobby elevators – and has an entire riverfront suite named for him, featuring Fantauzzo’s most awarded works and boasting a sizable chunk of real estate.

Around 500 total Fantauzzo giclée prints detail the hotel’s public areas, 166 guest rooms and hallways. Eight original paintings greet guests in the lobby, including Keddie’s stunning portrait which watches guests as they check in over the crooked stone reception desk.

The lobby’s spread of art deco furniture is a nice preview for the individually designed guest rooms, all which were meticulously styled by Keddie herself. My Deluxe Studio Riverview is a moody, postcard-worthy scene lifted by emerald green lounges, statement lighting and black-and-gold marble tables. Three Fantauzzo prints bring plenty of personality, their shadowy lines reflecting a wider charcoal palette that makes the room seem quite dark, brightened during the day by full-length windows bringing in copious natural light.

In Art Series lore, The Fantauzzo hugs closer to the gothic fantasy of Melbourne’s The Blackman, as opposed to bright and polished properties like The Cullen and fellow Brisbane hotel The Johnson. And it’s all the more charming for it, sucking guests into a world that feels like a subterranean designers studio.

Out of the many hotel brands I’ve experienced over the years, the Art Series signature bed is consistently one of the most comfortable with a soft, cloud-like texture that could easily justify hitting ‘snooze’ on that smartphone alarm a dozen or so times. That’s no exception here, and sinking under that creamy leather bedhead into a good nights sleep is the cap on Fantauzzo’s endless charm.

A polished cement ceiling adds the industrial chic feeling across the room, mirrored by neutral timber floors to help the colourful furniture stand out. It’s all very open, which unfortunately means there’s little storage space for long-term guests to hide things away.

Personality is rounded out by the signature Art Series inclusions, like the gold drip mark coat hooks hanging above the entry door, the canvas begging guests to become artists themselves, and the curated art library which of course has books relating to photorealism and Fantauzzo’s works. Then there are the upscale amenities, including Evo products in the bathroom, a coffee maker and teabags from T2.

The guest room hallways are themed with different collections of Fantauzzo’s works like level 5’s “30 portraits in 30 days”, which draws on one of his more ambitious projects and proudly displays the results. Although the odd choice of pumping house music on constant rotation is quite jarring to the entire aesthetic; luckily the rooms are sound-proofed so you’re only blasted with four-by-four as soon as you open the door.

A small intimate gym is tucked away inside the geometric six-storey building, and although it’s afforded the least amount of space compared the hotel’s other amenities, the mix of free weights and cardio machines is welcome for fitness minded guests staying long-term.

The aforementioned infinity pool may be seriously lacking in size, but it makes up for that with expansive views across all the action facing the hotel head-on. You won’t find a rooftop pool with views like this, so many the most of it between drinks from Fiume.

The fresh-faced team, all genuinely friendly and speedy in service, is lead by General Manager Shaun Fields who is more than experienced in treating each and every guests like a royal. He did serve as the personal escort for Queen Elizabeth II once upon a time, as well as tend to the superstar likes of Oprah Winfrey and Lady Gaga. You’re in good hands.

With the average nightly rate at The Fantauzzo starting at $249, it’s a well-priced hotel that provides incredible value. Confident, unique, impeccably dressed, and enlivened by Vincent Fantauzzo’s masterworks, it stands as Art Series’ finest achievement to date, showing that there’s still so much to the 10 year old brand. It’ll be interesting to see what they do with their forthcoming Perth property.

The writer stayed as a guest of The Fantauzzo.