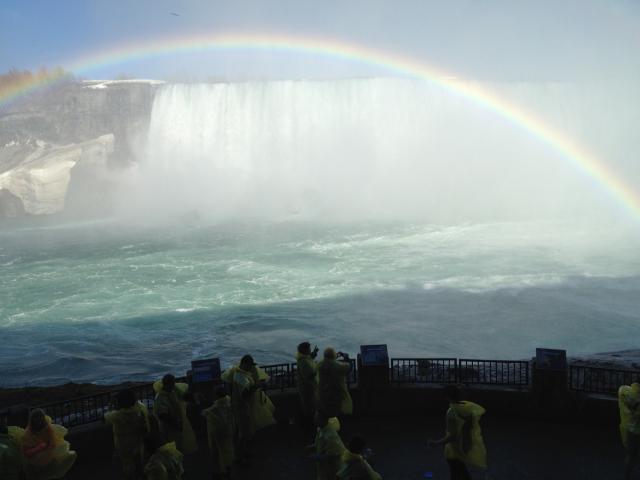 In the first part of our special feature series on the Niagara Falls day trip in Canada, we literally took you inside the famous Horseshoe Falls and got a birds eye view of the natural wonder from our elevated room at the Hilton Niagara Falls. But there are more than a few ways to get a view of the falls – and these views only scratch the surface of what you can get up to as a tourist in the city. From butterflies to helicopter rides, ferris wheels to dinosaur mini golf courses and even an IMAX experience, it’s hard to fit everything into one short day. But I definitely tried.

Before heading behind the falls, I had the opportunity to visit the attraction “Niagara’s Fury”, a two part experience that’s meant to compliment the “Journey Behind The Falls” with the affordable Adventure or Wonder passes (details on those can be found at the Niagara Falls Canada Tourism Website), which bundle together a variety of experiences. “Niagara’s Fury” starts off with a short animated film with some cutsy characters – chipmunks, owls and such – who tell the story about how the falls – both the Horseshoe and American – were formed. Enjoyable, though more for the kids than the adults and not the attraction’s main feature. For this, you’re put into a large circular room, surrounded by massive screens and water as staff make sure you’ve secured your poncho.

The experience here supplements the story you’d just been told in the 3D animated adventure, putting together real imagery of ice, rivers, streams and falls as you are sprayed with foam and water. The walls become falls of their own, as they disappear into the water below and the ground rumbles. With the actual falls metres away, the real thing is certainly preferred, but it was nonetheless an enjoyable experience, and a particularly good one for families who may not have the time or budget to take on some of the other opportunities – such as the Hornblower Cruise.

Another educational experience was found inside a big pyramid in a parking lot up near the Space Needle-esque tower that beams over the area. Inside the pyramid is where you’ll find an IMAX theatre that screens, hourly, a documentary about Niagara Falls, called Niagara: Miracles, Myths and Magic. Beautifully shot, the 52 minute film from 1986 captures the falls from a variety of angles, while feeding in the legends of the falls from the Native population as well as reenactments of some of the falls’ greatest feats that have seen daredevils crash over inside barrels, survive miracle falls and even tightrope over them (which was reinacted by real life tightrope walker Philippe Petit, best known from the extraordinary film Man on Wire). 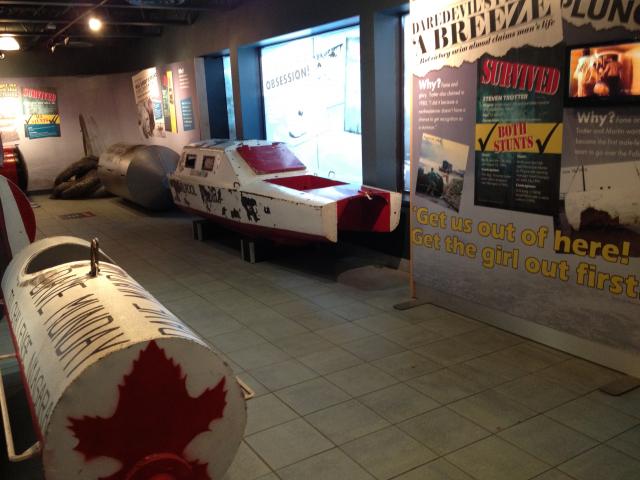 Though as with many of these sorts of documentaries, some of the reenactments were a bit corny, especially the Native American’s “legends”, but it’s worth seeing for the IMAX experience alone. I just hope they use the screen for other films, too (it appears they don’t…)! Following the film you’re able to walk through an attraction showcasing some of the very barrels and pods that have been used over the years in daredevil feats. 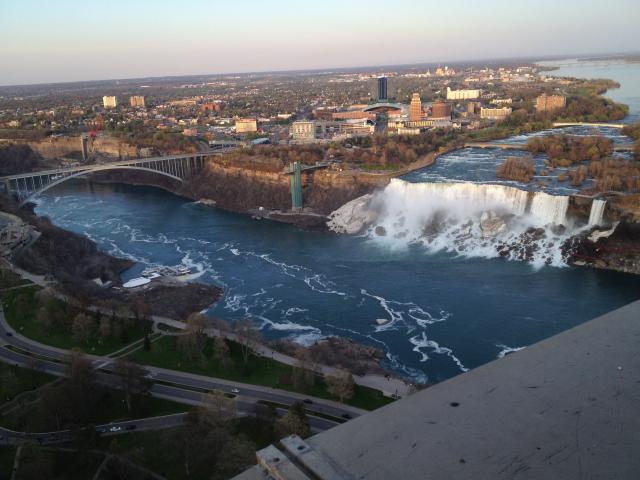 Heading up the nearby space needle (The “Skylon Tower”) also provided an impressive 360 view of the falls and its surrounds, which were even possible during the climb up the tower in the exterior, transparent elevators. A restaurant and buffet is also a feature of the tower, alongside a seemingly out-of-place Dinosaur exhibition called “Battle of Titans”, which sits above a games arcade. The exhibit features dinosaur skeletons, informative videos and animatronic beasts. Fans of dinosaurs will also enjoy the dinosaur miniature golf course, not far away on Clifton Hill. 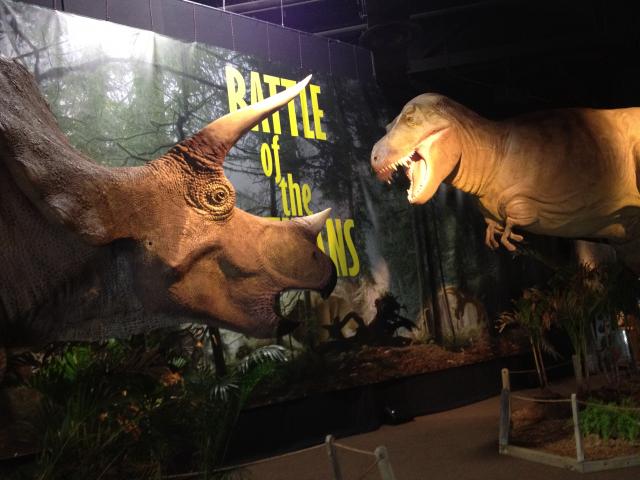 So what do dinosaurs have to do with the Falls? Well, not much – beyond the fact they probably lived in the area at one point in time. And there’s plenty of “no relation to the theme of the falls” experiences to be had. Clifton Hill is home to a carnival-esque strip of bars, restaurants, amusement park rides and attractions. From a mirror maze to haunted houses, bowling alleys, live music and 4D experiences starring Happy Feet, kids will have plenty to enjoy in the pile of family friendly activities. 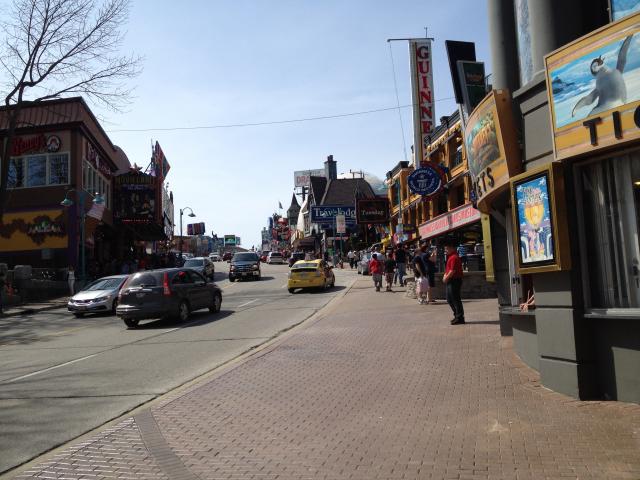 Not far from the Hill, there’s also an exhibit called “Sand and History” that felt like it was out of Sam & Max: Hit The Road (a really obscure LucasArts game reference from the 90s. If you get that, award yourself 10 points), that sees you walk through permanent sand sculptures that were created a couple of years ago to commemorate 200 years of US-Canadian relations at the Niagara Falls border and the war of 1812. 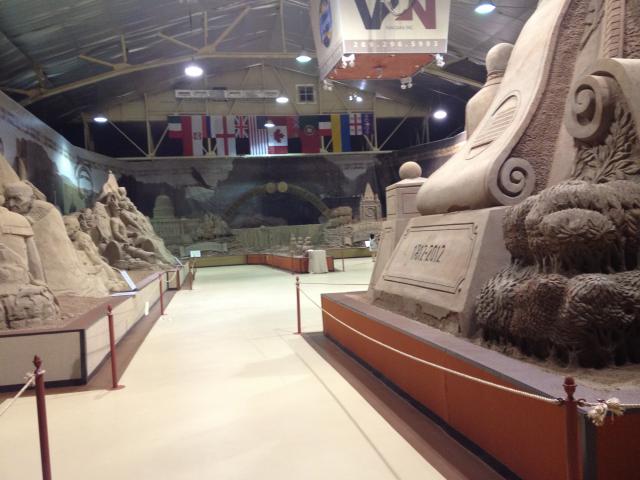 More historically relevant than a haunted house, the detail of the sculptures is impressive, and a video screens at the end of the hall – essentially an old sports arena – that explains how the sculptures were made. Sand and History combines the work of 17 professional sand sculptors who have created 25 pieces for the exhibition. For more details, head to the official website. 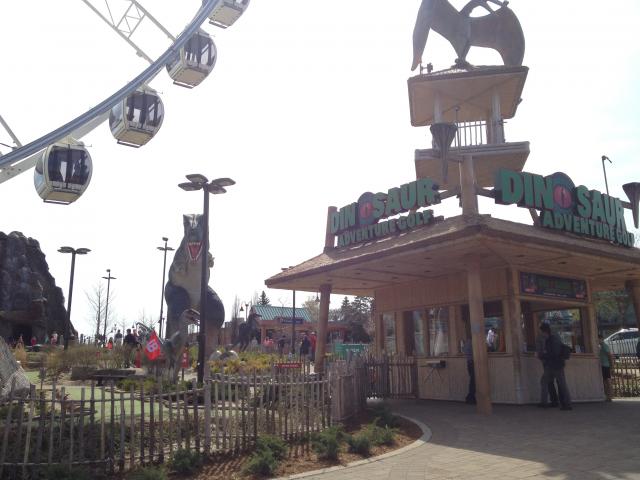 The hill’s Ferris Wheel – known as the Niagara SkyWheel – will serve as one of the best family activities in the area. Travelling 175 feet into the air at 4.5 kilometres an hour, 42 gondolas serve guests a 15 minute ride with excellent views of all of Niagara’s falls, as classical and jazz music play alongside some commentary of the views. 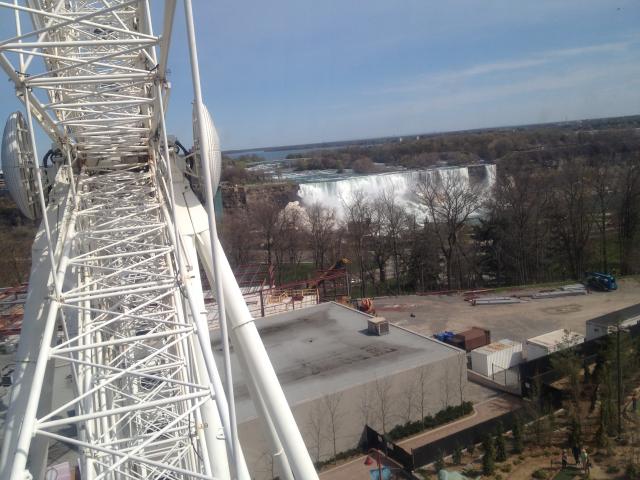 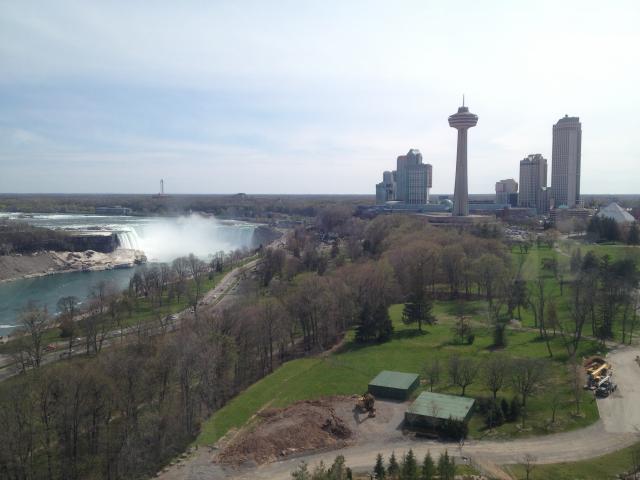 The cost will set you back $10.99 for adults, and is a worthwhile journey. But the only true “birds eye” view was found through a helicopter – my first ever ride in one of the more unique methods of transportation. 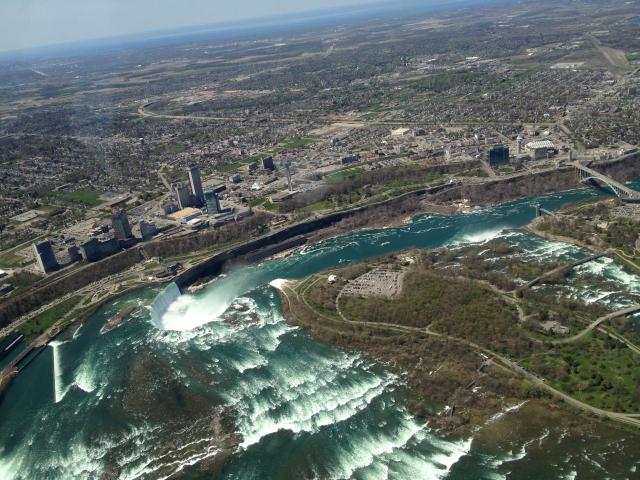 Operating since 1961, Niagara Helicopters are the longest running tourist helicopter service in the world and they run all year round. Taking you from its base, not far from the Niagara Whirlpool, over the falls and back, you spend about 12 minutes on board. Though things seem a bit hectic when you run onto the copter – the loud sounds of the propeller overhead feel like your head and hair are in great danger! – once inside, it’s a relatively smooth and quiet experience. 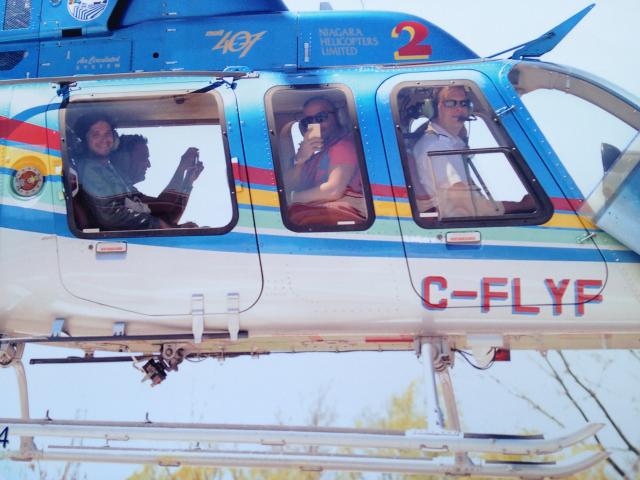 Commentary in the supplied headphones goes between English and Spanish, though you rarely listen as you try and take it all in. At $137 an adult, it’s not the cheapest way to see the falls – for that you have your Towers and your SkyWheels – but it’s certainly the best. It’s an unbelievably unique view that probably deserves more time in the air than you’re given, as you see the rivers pour down the falls in what one would imagine the end of the world to look like. 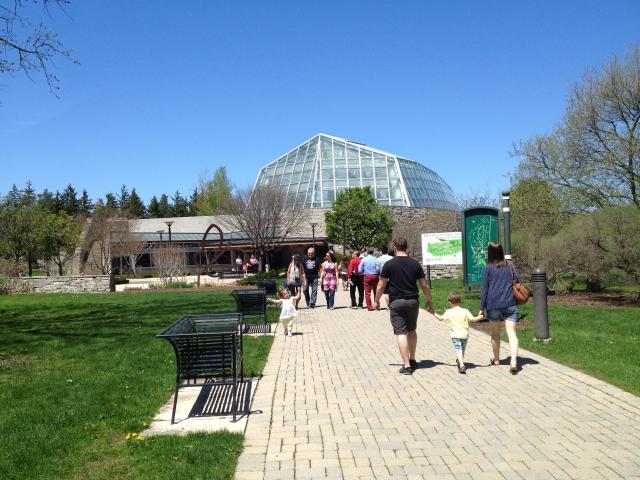 Those wanting to experience something a little different also have access to the Butterfly Conservatory with their Wonder Passes. Located North of the falls within the Botanic Gardens, the exhibit sits at the end of the green WeGo bus line (unlimited access to which is included in the pass) that runs along the river and serves as the best way to get to attractions like the Niagara Whirlpool, over which the “Whirlpool Aero Car” provides the daring a great view of one of the most powerful – and dangerous rapids in the world, and the aptly named “Souvenir City” nearby. 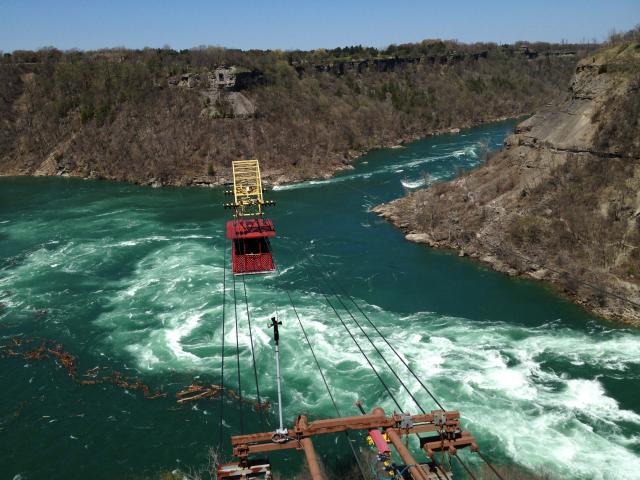 The butterfly exhibit itself starts things off with a collection of reptiles before you enter a room with a video called “The Adventure Takes Flight”, an introduction to the exhibition and the surrounding gardens, which is almost twenty years old and screens on a TV even older. They are probably due for an update. But once inside the butterfly greenhouse you enjoy hundreds of creatures flying around and landing on you as they feed and frolic. Poison frogs can be found in cages and descriptions of all the plants in the area will be a horticulturalists dream. 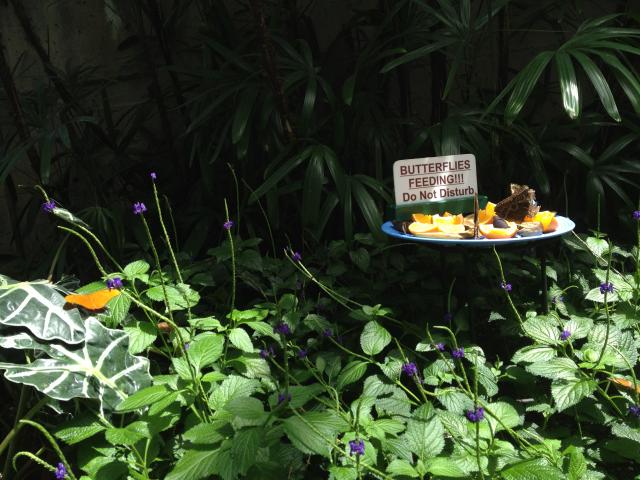 Though these experiences aren’t provided to you in any particular order that they were experienced, I managed to make it to all in – with the exception of the rapids gondola ride – in one afternoon. Though damned if my feet weren’t exhausted by the end of it all. My night ended sitting at the edge of the falls, which were beautifully lit up with the respective colours of the country they represented (red, white and blue at the American falls…), as 5 minutes of fireworks lit up near the American side at 10pm. After a rather exhausting day, it was a stunning way to end my trip to the falls.

I returned back to Toronto the next morning by way of Megabus, who provide an affordable route that picks up straight from the Casino – a service not offered by Greyhound – though with a few extra stops en route, it’s not the option to get if you’re in a rush. But with free wi-fi and comfortable seats, there are no complaints from me. And once again, the weather could not have been more beautiful. A bus is a fantastic way to see the country. 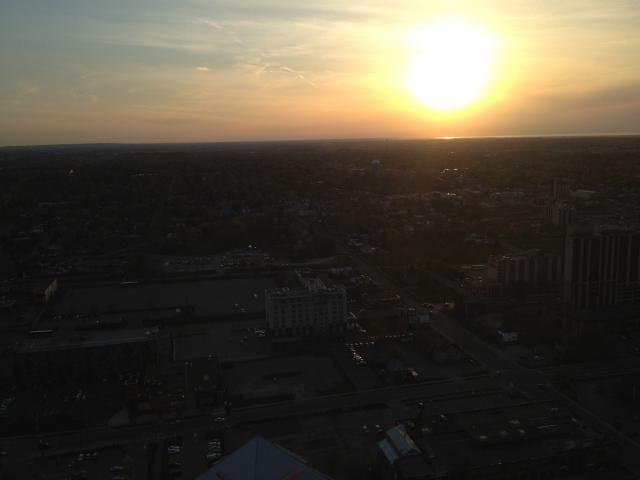