Marriott has the W, IHG have Hotel Indigo, and Sofitel (owned by Accor) have the rapidly growing “SO/”. Hotel brands known for their warm luxurious embraces have, in the past decade especially, finessed their respective languages and funnelled them into younger, energetic off-shoots that fully commit to the “luxury boutique” label and thrive on individuality.

These design-focused, highly fashionable luxury hotels are swiftly becoming the top picks for younger travellers looking to visit any city around the globe. For Bangkok, that is no better represented than by SO Sofitel.

It’s an odd name, apparently inspired by the brand’s touted “just say so” service philosophy, but “SO” is expressed beautifully here as, given it was only the second of its kind to open after the brand met success in Mauritius.

Bangkok is widely known as having some of the best hotels in all of Asia, so Sofitel’s younger, more soulful sister brand is appropriately held to a high standard. 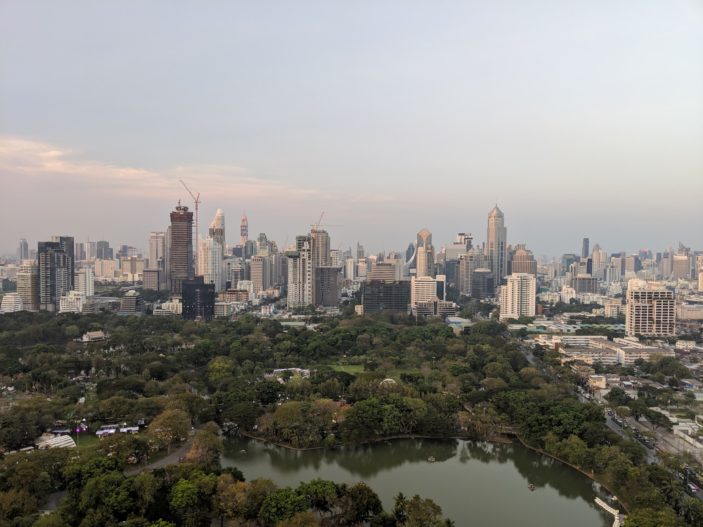 The hotel’s downtown Sathorn location means everything in Bangkok. Just ask anyone who has been stuck in a thickening traffic jam during the city’s famously chaotic peak hour and you’ll be scrambling for a hotel like this one.

Bangkok’s largest urban park, Lumpini, is directly opposite “So” and is a welcome feature of its rooftop bar vista. That big green patch in the middle of all that concrete has a somewhat calming effect when you’re scanning the Bangkok skyline, as does actually walking through it, with plenty of trails for morning joggers wanting a brief escape from the city’s constant hustle.

This also means that Lumpini Underground Station is within walking distance, so zipping around on public transport is no issue. Anything you can do to avoid actually having to drive around Bangkok is a good thing.

The nearest sky train station. Sala Daeng, is served by a free shuttle from the hotel, which also takes guests along to upscale shopping at Silom Complex. 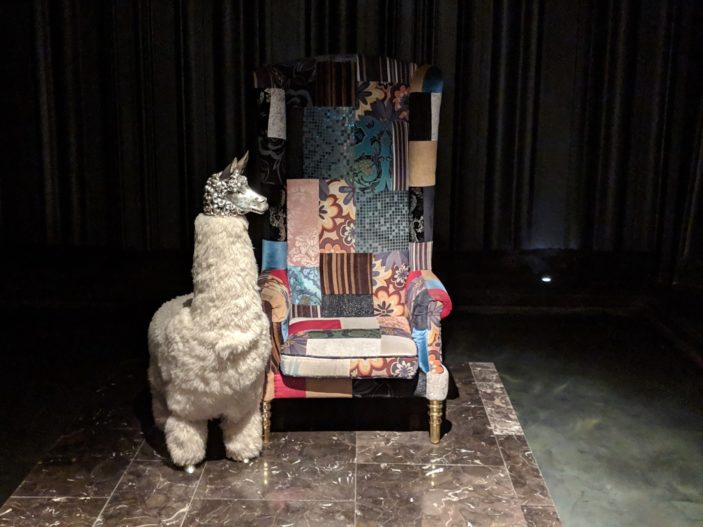 Design legend Christian Lacroix and a team of five Thai architects have married French and Thai styles to create something wholly unique in the hotel space.

This is best realised in the luxurious and hyper-colourful Executive Lounge, leaving the hotel’s eccentricities to fringe areas like an amusing off-shooting walkway featuring a lone throne in the middle of water, guarded by a plush silver-headed llama.

The 9th floor lobby, not to be mistaken with the more grounded street-level entrance which benefits from the whiff of hand-crafted chocolate at the Choco Lab, is equally impressive. It’s an opulent, social space with a casual bar hanging out at the back, supersized thanks to stately glass windows that overlook the park. Polished hardwood floors and plus mishmatched furniture help build character. 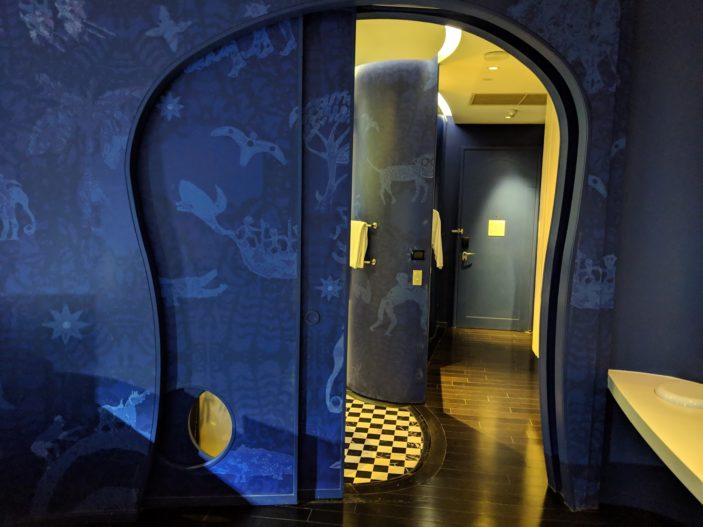 Lacroix’s highly conceptual approach to the guest experience is best represented by the room categories. They are split by the tags of water, wood, earth, and metal (the restaurant, Red Oven, represents fire), all chosen to invoke the five elements in Chinese culture; all vastly different with their own individual kinks.

As a guest of the hotel, I was able to pick from four of the categories and went for the most unique looking: earth. These earth rooms, directed by famed local interior designer and architect Vitoon Kunalungkarn, seek to translate the indigenous carvings of Thailand’s northeastern caves into an entirely immersive and playful guest experience. 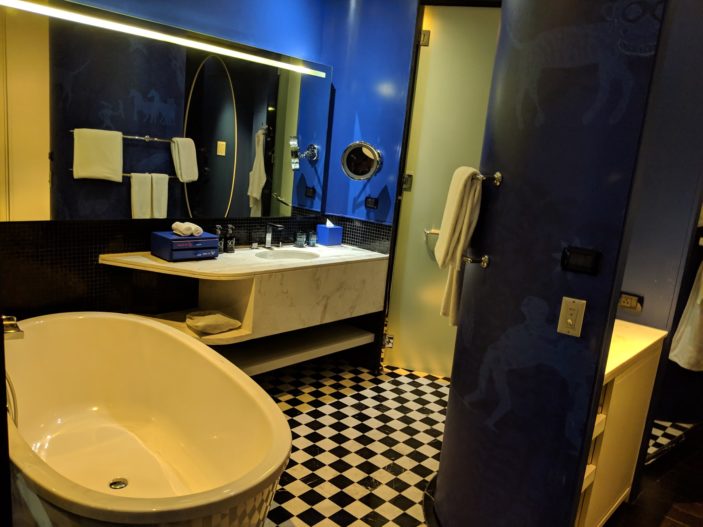 Flicking through the photos of the guest rooms, you’ll spot the neat wood rooms which lean closer to traditional Thai styled interiors, and the luxe water rooms which feature bathtubs overlooking the city. But the earth rooms are clearly the most flamboyant, with a glowing blue palate making guests feel like they’ve just left Bangkok and landed in the famed Moroccan city of Chefchaouen. . 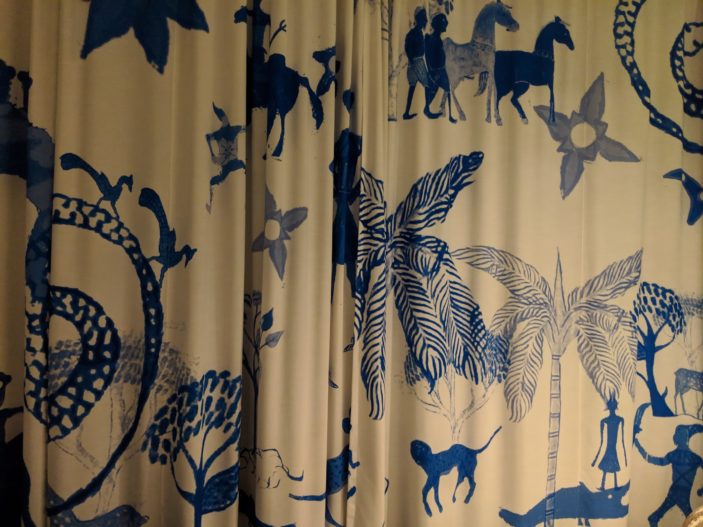 Comfortable bed and deep standalone tub aside, what I liked most about the room were the curtains that cover an enormous window peeking out over Bangkok. Like the walls, they feature meticulous recreations of cave paintings on white fabric, really committing to the room’s theatrics. 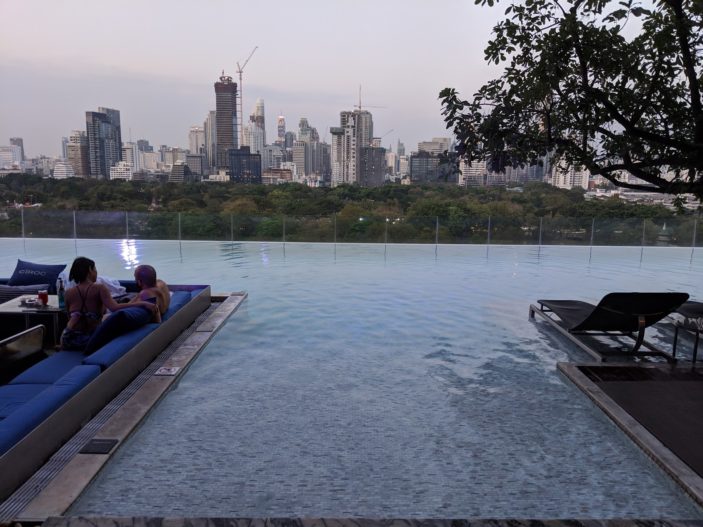 An enormous fitness centre looks out over the 32-metre long infinity pool, offering Thai boxing classes and yoga to guests. On the same level, the signature “SO Spa” has an enchanting design that veers towards the fantastical, immersing guests with suspended tree trunks and wooden slats as if they were wandering through a forest. 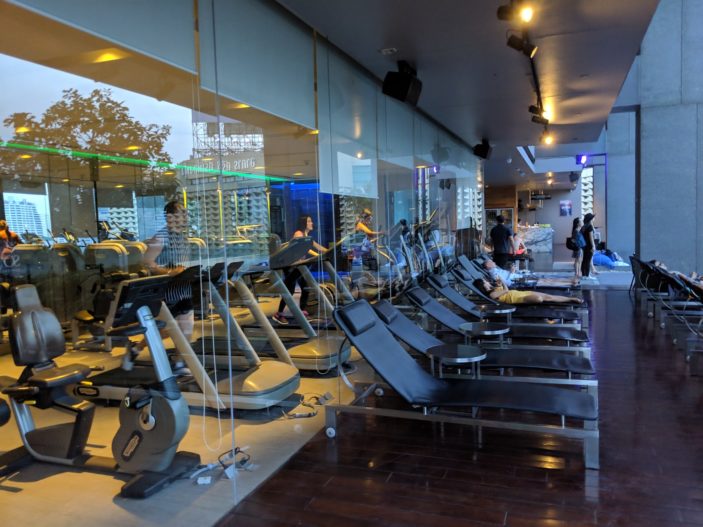 With spa, gym, and pool all on the same floor, it’s easy to see why this is where most guests can be found. And locals too; the area is known to host raucous pool parties, which maintains the hotel’s reputation as a social hub for Bangkok’s trendy crowd as much as an oasis for visiting guests.

The pool seems to lack temperature control though, with the water unreasonably cold from my experience.

A gift store also sits in the street-level lobby, which seems to take an artful and unique approach to Thai trinkets with designer goods and a rotating theme. On my visit, the space was completely dedicated to work by famously eccentric Japanese artist Yayoi Kusama 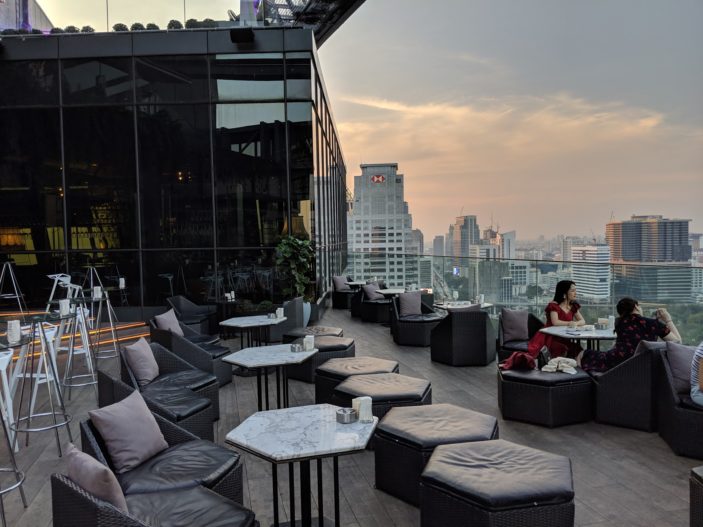 Red Oven is named so for a Molteni oven that sits in the centre of the kitchen, handling most of the French-inspired menu options that dominate dinner. While I wasn’t able to sit down to a meal, I certainly made the most of the restaurant’s morning breakfast buffet, which is a lively spread of multiple cooking stations and generous selections that are surprisingly – and somewhat disappointingly – biased to satisfying Western options. It would have been nice to see more traditional Thai breakfast staples, although one can hardly complain given the high quality of everything.

The hotel’s 29th floor Park Society is said to be a local favourite with upscale options like Canadian lobster and Australian tomahawk steak. Although I wasn’t able to try it on my short visit. 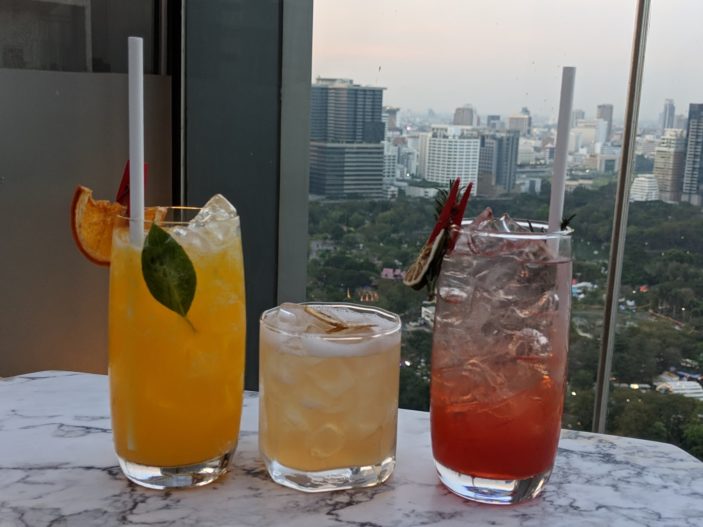 HI-SO is perhaps the hotel’s biggest drawcard for both locals and visitors, perched on top of the 30-storey building. The rooftop cocktail bar is a steamy social space with two floors and enough nooks or private cabanas for more intimate, smaller groups. Classics are handled with aplomb, as are the fresh, fruity and colourful signatures.

The fashionable staff at SO look fantastic in their Lacroix-designed uniforms, and their all-smiles, anything-you-need attitude is perfectly in-line with the hotel’s high standard of comfort.

The average nightly rate seems to fluctuate greatly, but it’s safe to say the hotel is usually set at around the AU $230 mark. That’s not a bad price at all for the level of comfort offered, and significantly boosts the value alongside its convenient location and exciting common areas.

“Sexy” is a word often associate with SO Sofitel Bangkok, and that certainly nails the image of soft lighting, pool parties and highly attractive guest rooms. It’s a seductive escape from Bangkok’s haphazard lifestyle, focused but flexible enough to really solidify its position as one of the city’s leading lifestyle hotels and a distinctive, unique model that makes SO/ one of today’s most interesting hospitality brands.

Word has it that there’s quite a few SO/ properties opening up around the world in the coming years, and if they can soak up the city as successful as this Bangkok property has, then they are well worth paying attention to.

The writer stayed as a guest of SO Sofitel Bangkok.

All photos by Chris Singh