Kicking off on Friday, the Edinburgh Fringe is widely regarded as the world’s best Fringe Festival, which shouldn’t be all that surprising; it just so happens to be in one the world’s most vibrant and exciting cities. While the Fringe will give you more than enough to enjoy  Here’s just seven things to do in the city while the Fringe is on. Or any time of the year for that matter…

It may be the most iconic tourist attraction in Scotland, but no trip to Edinburgh is complete without a trip to Edinburgh Castle, where you can see the Royal Jewels, explore the old gaols, take photos in front of the cannons, and realise you’re standing on a 700 million year old extinct volcano which is known as Castle Rock. Even more: It’s housed the royals since the 12th Century! 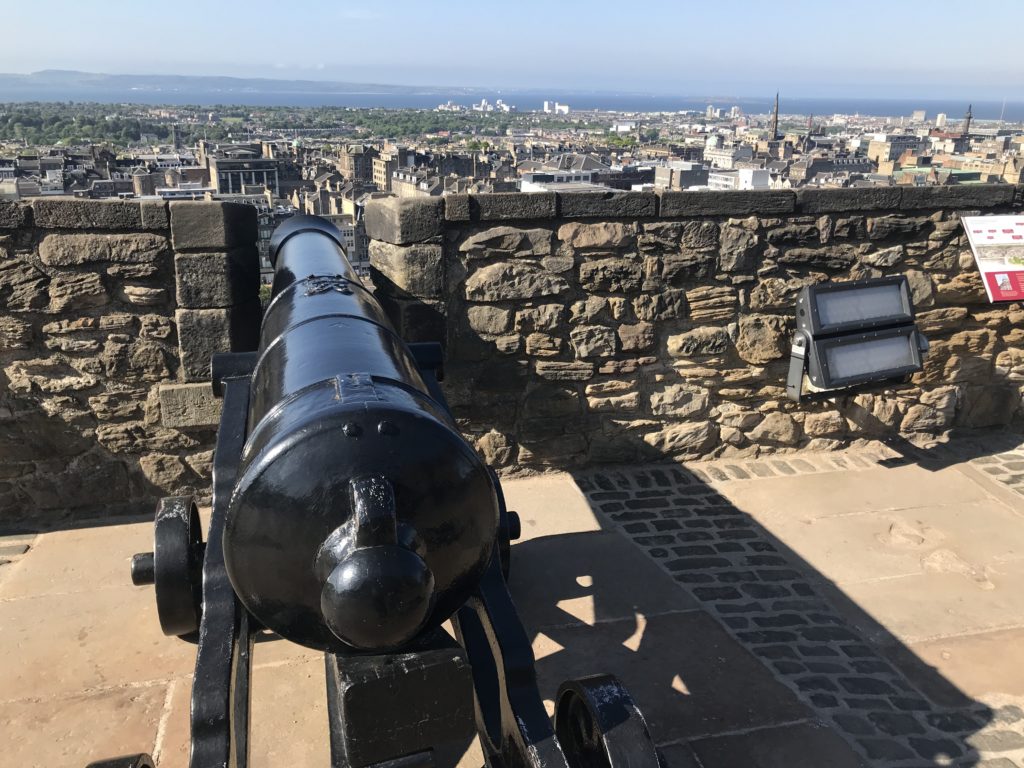 And of course some Whisky too!

OK before we get back to the sightseeing, let’s enjoy what Scotland is known for: its Scotch!  There’s no better than the The Scotch Whisky Experience (The Royal Mile, 354 Castlehill, Edinburgh), home to the largest Whisky collection in the world. Sadly it’s not for sale – but they do have plenty of amazing Whiskys that are for sale. And the tour of the facilities is as entertaining as it is enlightening – and of course you get to whet your whistle while you’re doing it. 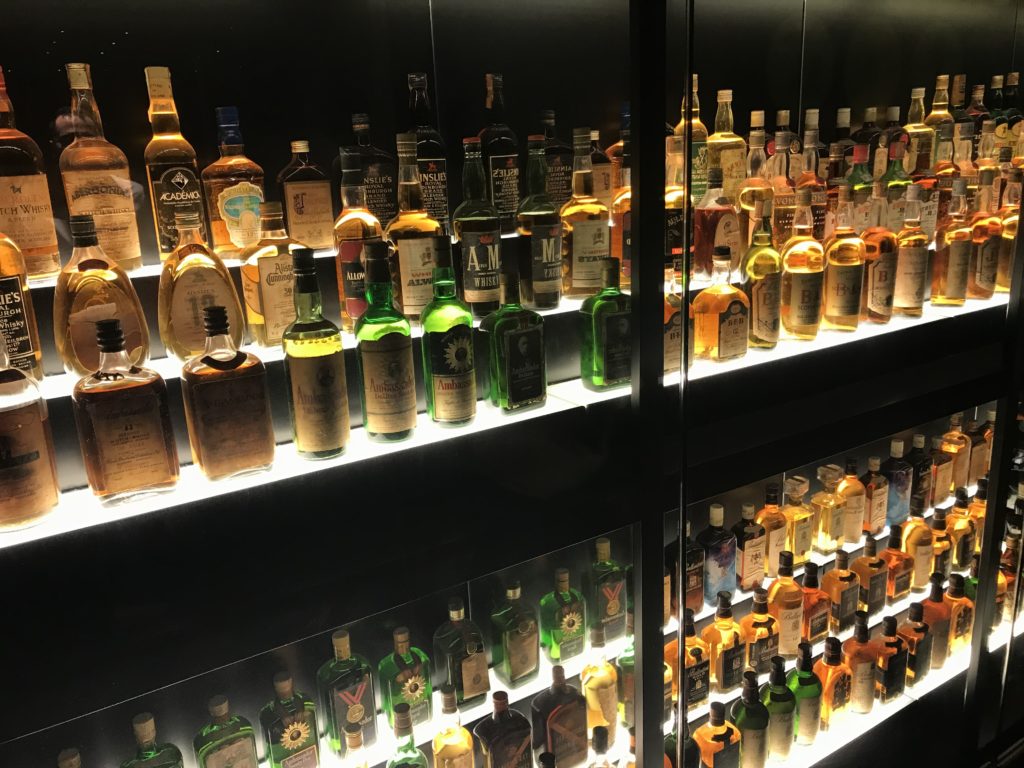 We recommend the Platinum tour, which runs daily at 6.15pm daily, and sees you enjoy 5 tastings throughout. It starts with a ride that teaches you how whisky is made, and then there’s some explanations about the different types of whiskys made in region (complete with a scratch and sniff card!). As part of the Platinum tour at the moment, they are letting you try the 30 year blended scotch, made for their 30th anniversary and completed using 30 types of whiskys by William Grant and Sons. Only 550 bottles were made, so this was a pretty special experience indeed. If you only do one experience on this list, this is the one to do.

Next up, a trip to Edinburgh Gin Distillery (1a Rutland Place); where you’ll find out how gin has become more and more popular in the region in recent years. Sit and learn the history, how that popularity is cyclical, and taste all the ingredients that make the gin come to life. Then, see the stills, drink three gins, two liquors and get a small bottle to take home. They book out these tours weeks in advance so get in early – or just come and check out their bar, which opens after 5pm! 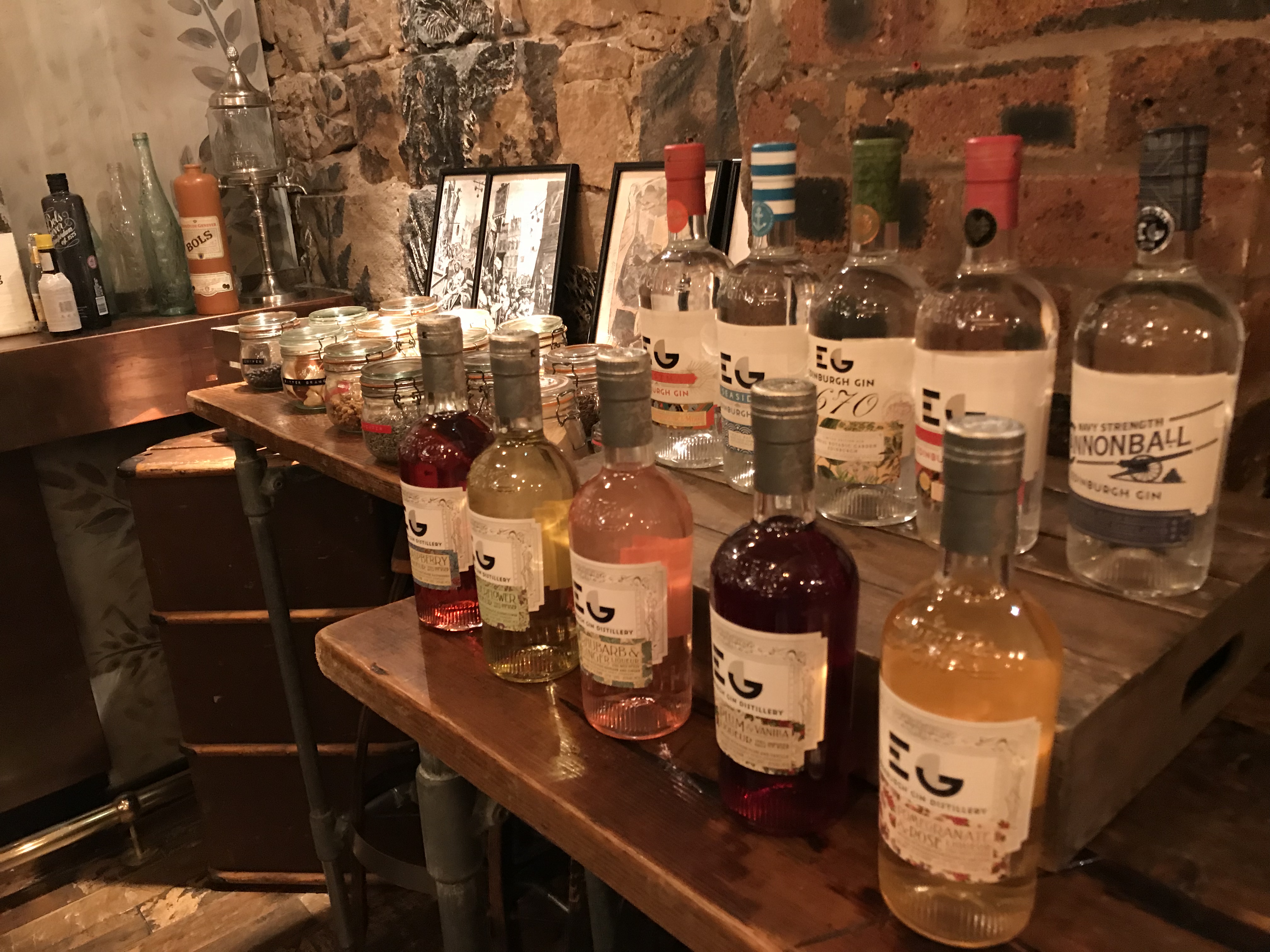 And then actually find some great bars…

With its rich history in Whiskey and indeed Gin, it’s no surprise that Edinburgh is full of some good bars. But to find the great ones – you really need to know where to look. My favourite is Panda & Sons (79 Queen St), “a hidden bar fusing the classic Prohibition style Speakeasy and a nod to the Vintage style Barbershop.” And though its design and vibe makes it worth the trip alone, it’s the exquisite cocktail menu, full of incredible creations like the “Birdcage Cocktail”, which comes presented in a glass container filled with smoke, with Whisky, rhubarb & lemongrass shrub! There’s also the “Tiki Takeaway”, which is served in a Chinese take away box… as you do! 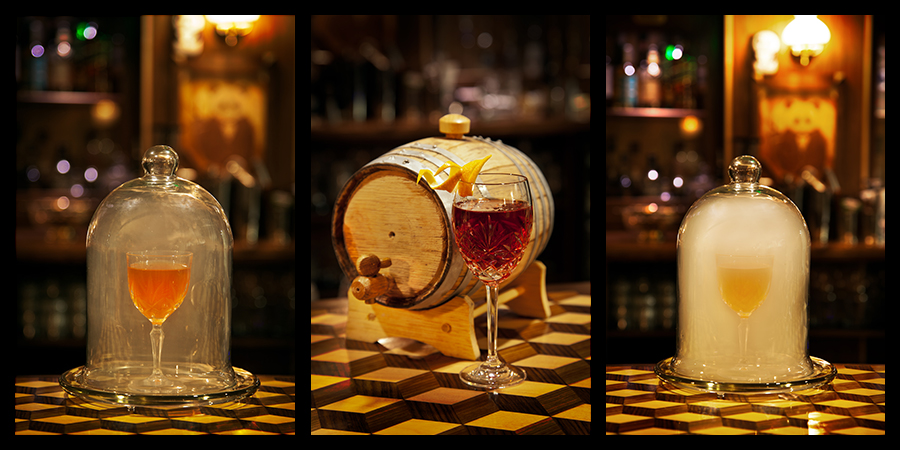 Other gems in the city for a great cocktail include Lucky Liquor (39A Queen St), which is just down the road from Panda & Sons on Queen Street, down the road on York Street there’s Nightcap (3 York Pl,) and a few minutes walk from there is Kin (1 Barony St). If you’re looking for a more traditional pub, with it’s own sweet sense of style, don’t look past St. Vincent Bar (11 St Vincent St).

Travel into the depths of the city…

By now it’s probably the next day. You’re a bit hungover but you’ve got some more Fringe shows to attend. Many will be around the Royal Mile, so while you’re up there, check out The Real Mary King’s Close (located opposite St Giles Cathedral on the Royal Mile). This takes you down to what’s left of Mary King’s Close; a close basically being what the Scots call a narrow alleyway, with buildings six stories tall on either side. It was a common way of living in the 1600s. 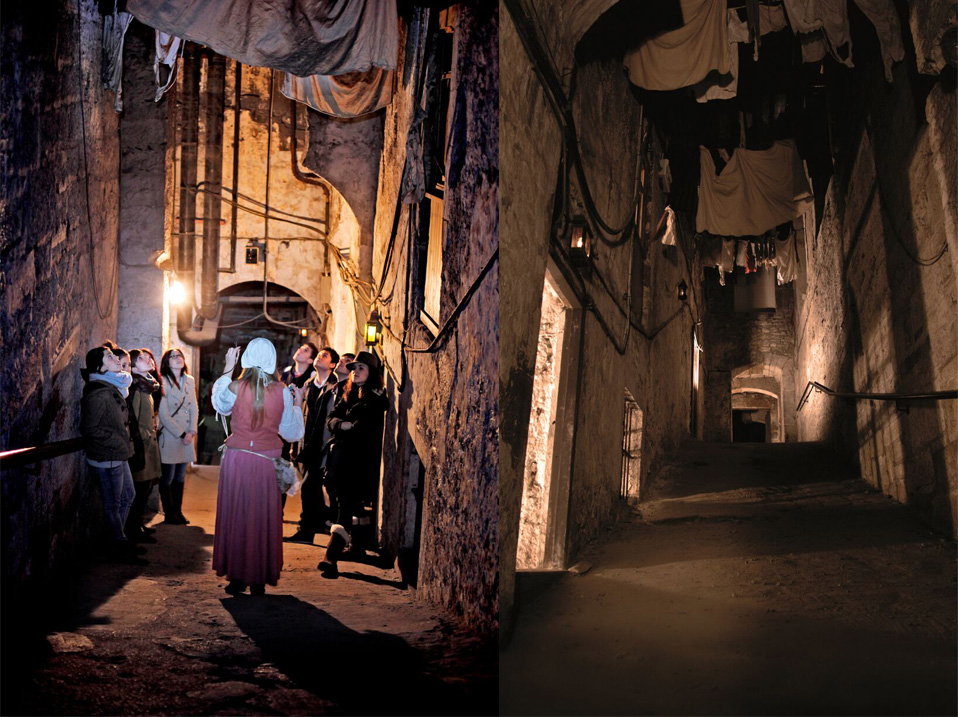 The close here is named after a merchant burgess named Mary King who lived there in the 1630s. After taking the tour of the close – which is an engaging and fascinating experience – I learned two things. One, Mary King was a boss. For a woman to have a close named after her at this time was unheard of. And second, for everything we complain about, we don’t live in the 1600s… and this is a good thing (though as I’ll mention later, there is a hotel in the city where you can play pretend, with all the comfort and luxury you can handle).

…climb above it as well!

It seems like another cliche for tourists, but the Camera Obscura is a fantastic attraction to visit, especially if you’re with your family (but even when you’re on your lonesome!). Founded in 1835, and in its current location right by Edinburgh Castle since 1892, the Camera Obscura is Edinburgh’s oldest purpose built attraction, and one of the oldest in the whole United Kingdom. 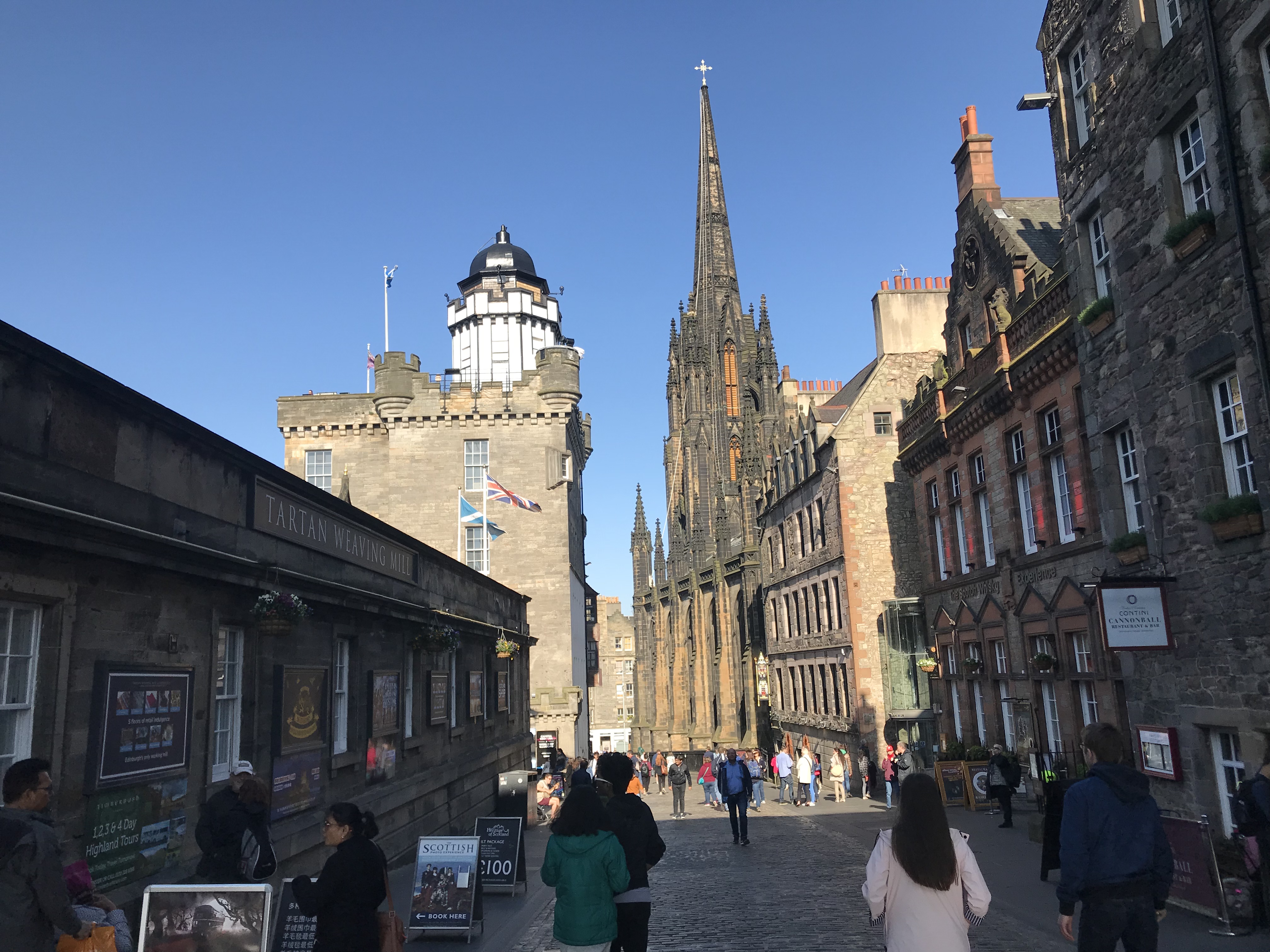 Set across six floors are a number of interactive installations which all revolve around illusion – in fact they call it “World of Illusions”. This has been added in more recent years – but the stairs that take you up the six floors remain as they always have. At the top, you get a birds eye view of the Royal Mile – and access, every 15 minutes, to the Camera Obscura presentation, where you enjoy a unique panoramic projected view of the queen mile and surrounds from the tower. It seems rather unimpressive now, but when it was first presented, it was revolutionary – and they still know how to have fun with it today. You’ll see it above on the left side of the photos – the white top of the building there, that’s where they house it!

And then head up to Arthur’s Seat

And finally, for an even higher, better view of the city, get yourself away from all the madness of the Fringe (although knowing the Fringe, it might even be a venue!), and climb up to the craggy slops of Arthur’s Seat, the peak of the hills of Holyrood Park, for a beautiful view of Edinburgh. The walk will take you about 2 hours, and like Castle Rock before it, you can take comfort in knowing this too is an extinct volcano. We’ll let this scene from T2 Trainspotting show it off in all its splendour.

If you’re coming from London, jumping on a train is the easiest, and internal travel within Scotland is then done with ease with ScotRail. A number of airlines will fly directly to Edinburgh, though you can also fly into Glasgow direct as well, with buses taking you straight into Edinburgh from the airport in around about an hour. For some airlines, this will be a more affordable route, so definitely try both options when booking your next trip to Scotland.

While you’re in Edinburgh, you can get pretty much everywhere listed on this article by foot – though we would recommend jumping in a taxi to get to Holyrood Park. Beyond that, you’re an hour away from Glasgow and even closer to a number of other incredible destinations within Scotland. Don’t limit your visit to the Fringe capital, but venture out into the unknown! ScotRail offer affordable, regular train travel around the country. And there are bus options too, but they’re not nearly as comfortable. 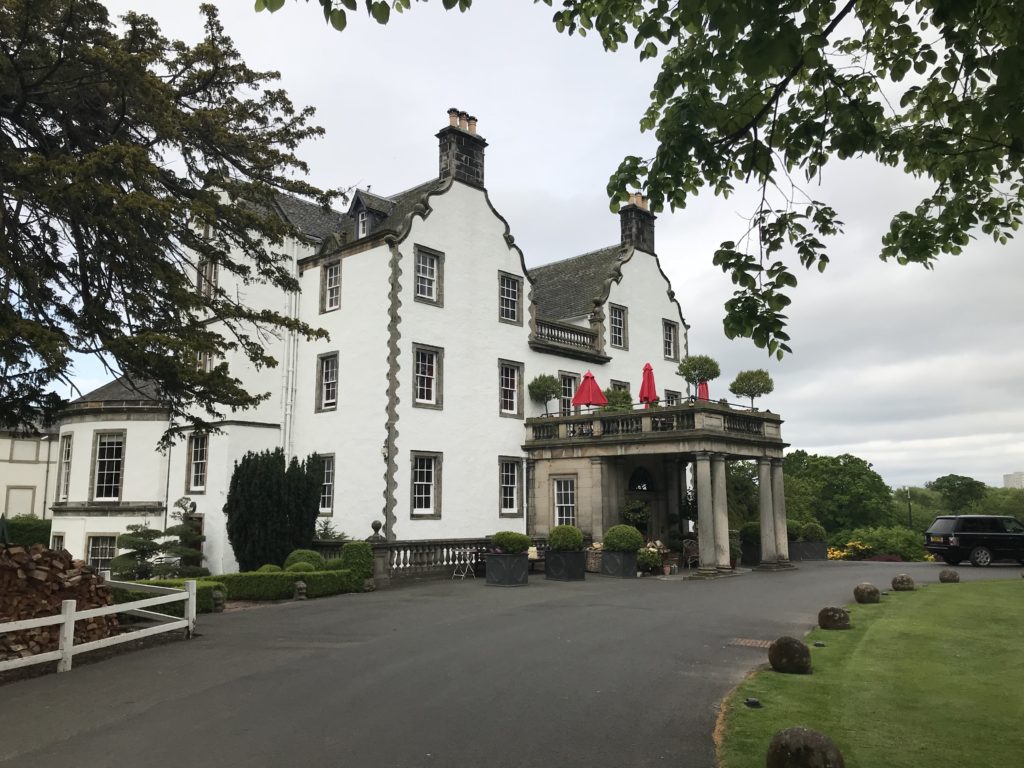 While in Edinburgh we stayed at what must be the most luxurious hotel we’ve ever experienced. Prestonfield House (Priestfield Rd, Edinburgh EH16 5UT). Built in 1687 as a wealthy rural estate by architect Sir William Bruce and reopening in 1960 as a hotel, the five star hotel – which sits under the watchful eye of Arthur’s Head, and against a golf course (because of course it does) – embraces the 15th century extravagance in all the most wild and wonderful of ways you could imagine. 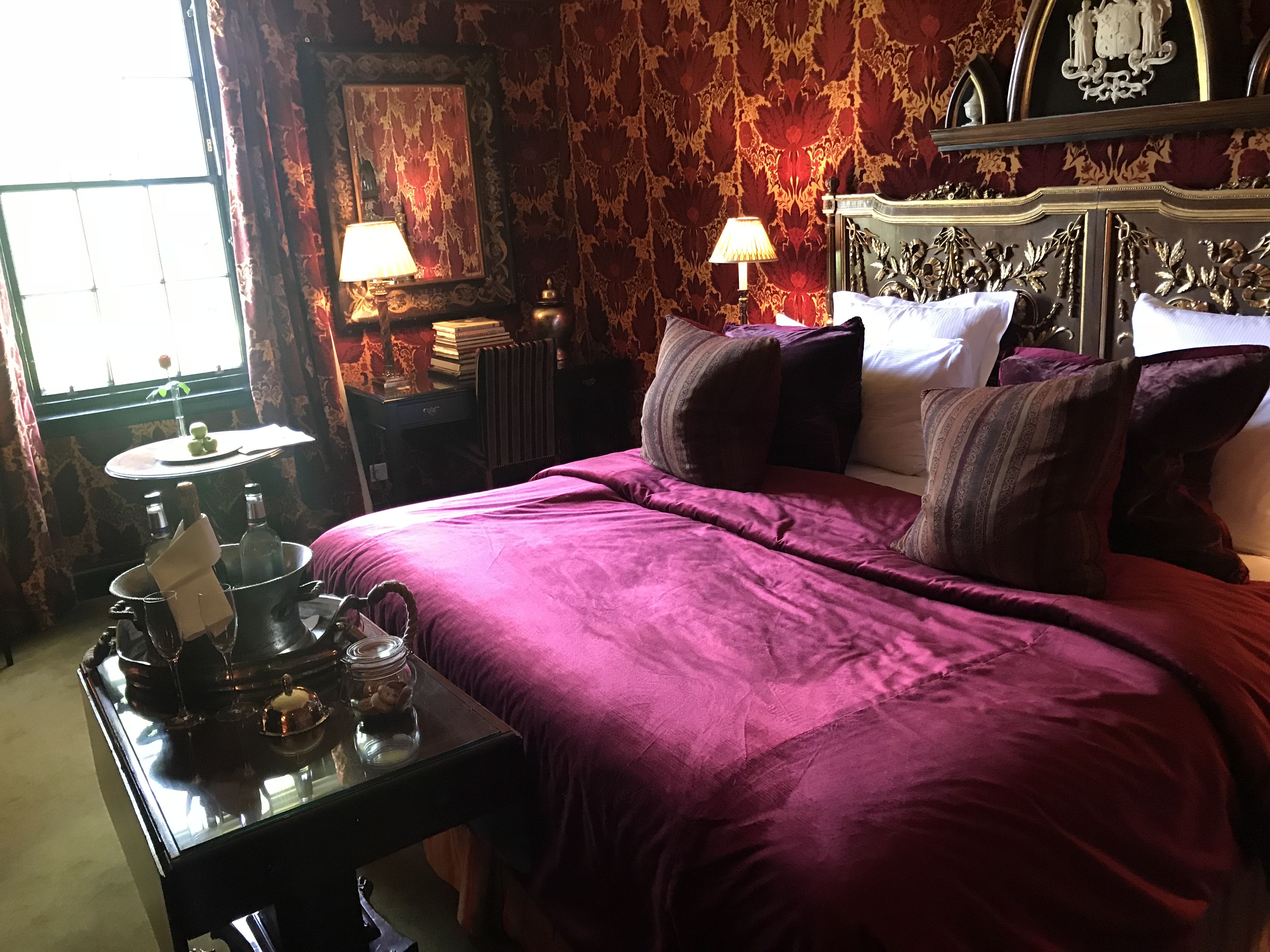 There’s also a roundhouse on site that were once the stables, but now host a number of events, including the Taste of Scotland festival. Look out for our feature on the hotel in the weeks ahead. Naturally with only 23 rooms, this will be a difficult hotel to stay in during the Fringe, but there are a number of other hotel options to enjoy. Still, add this one to your bucket list.

The Edinburgh Fringe runs from the 3rd to 27th of August. For more details head HERE.

All photos by the author, except of The Real Mary King Close, which was provided by the attraction, and the images from Panda & Sons, which were taken from their website.