Resort Review: Bali’s Karma Kandara makes the most of its clifftop location 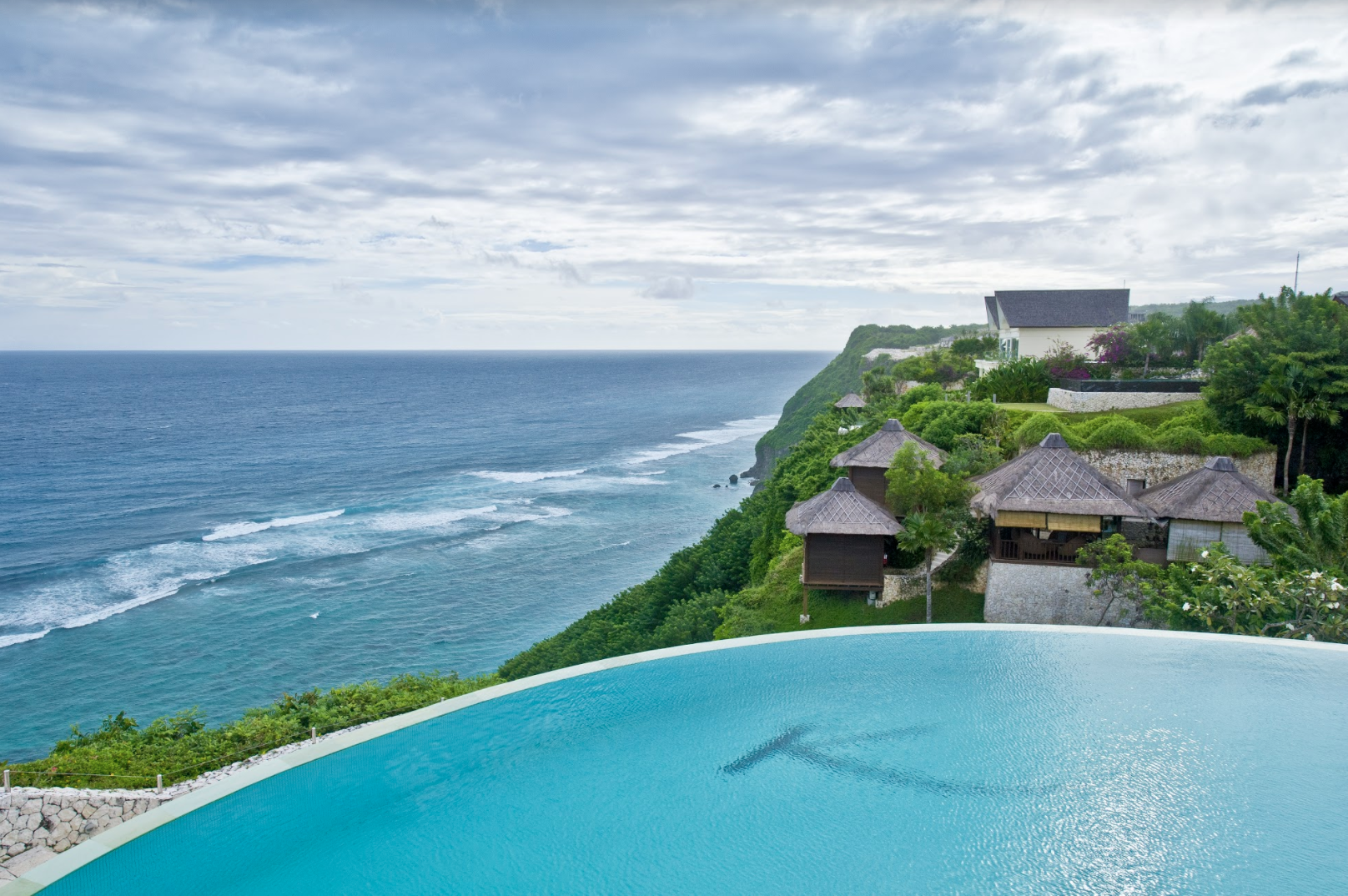 A luxury resort in Bali offering the kind of lavish stay island fantasies are made of, built with all the ostentation and pampering you could possibly want, is nothing new nor surprising. In fact, it’s expected on the Indonesian island nowadays, where a consistent influx of tourists watch as hotel and resort brands, both internationally renowned and locally grown, attempt to win their affections, from trendy areas like Seminyak, Ubud and Canggu to growing destinations like Uluwatu.

Many resorts look to unique features and locations to gain the competitive edge, and Karma Kandra certainly has a leg up thanks to their dramatic clifftop location. The property is perched like a glowing oasis above the island’s Bukit Peninsula, staring straight down at the concaved white sands of Karma Beach, which in turn offers a vast and inspiring view out to the Indian Ocean.

The Uluwatu resort is somewhat remote, especially compared with what the majority of Bali tourists would be used to. Though that makes the location all the more spectacular, slowly revealed once guests venture further into the resort grounds. It’s paradise hidden behind barren landscapes and dusty roads, as many of Uluwatu’s resorts and day clubs are, fully realised once you approach Kandara’s main restaurant, Di Mare. The open-air Mediterranean restaurant feels like it was transplanted from a breezy Greek Island, standing over an infinity pool and the dramatic cliffside, where the property’s most sought villas are perched, almost protruding over the rocks with their own sparkling private infinity pools. 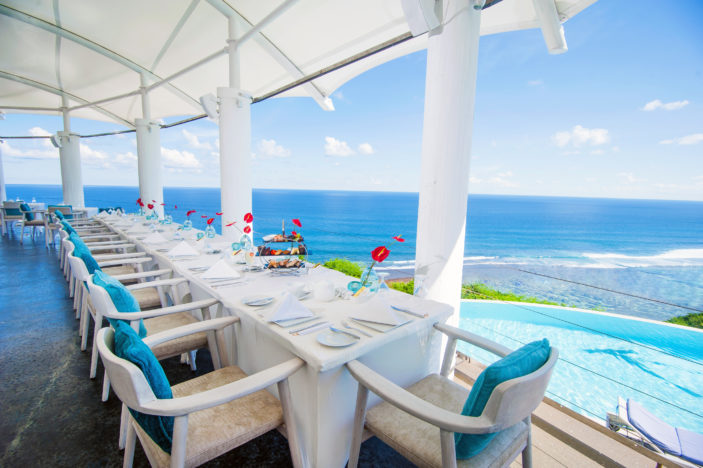 Down some stairs from Di Mare, on the same level as the pool, is a small station from which you can catch a 3-4 minute inclinator to Karma Beach Club. There’s a warning advising guests to keep their belongings safe during the short journey down, as the Bukit is also home to many mischievous monkeys (long-tailed macaques) who are particularly attracted to sunglasses and other loose items. Regardless, it’s worth leaning slightly from the front of the inclinator to try and snap the perfect shot of what’s before you. I think it’s one of the best views on the entire island, edging slowly towards the pristine turquoise lagoon which, during low tide, is separated from the deep blue sea by lines of rocks. This two-tone palette of blues, preceded by crescent white sand, looks even better if there are already beachgoers making use of the beautiful bright yellow kayaks, which can be taken (free) from the beach club and used to just float slowly in the tranquil waters as the ocean’s crashing waves are held back by the rocks. 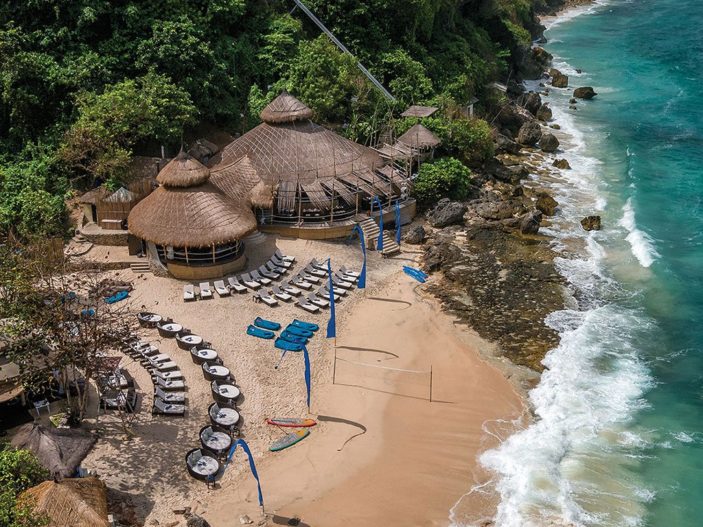 Entering the Beach Club, you walk out into another open-air restaurant: a beautifully decorated space serving up a menu of fresh seafood, pizza, incredible fruit juices, and creamy gelato. This place is perfect for a quick lunch before stepping out onto the sand and relaxing on the covered private cabanas, taking advantage of the extensive beer and wine lists touted by friendly staff who eagerly patrol the small beach. The carefree scene is soundtracked by local DJs and down-tempo house beats during the day, but as night falls the tiny DJ deck of Karma Beach Club could be home to just about anyone. Like many spots in Bali, the club regularly splashes the big bucks to pull in international DJs, turning the cosy cove into a lively party for guests and locals.

A hidden beachside spa is a nice spot for a massage right on the beach, though it’s a smaller extension of the more substantial Cliff Spa which is every bit as theatrical as the name suggests. The stand-alone treatment rooms looking over the cliffside with uninterrupted views make this somewhere that’s much better to visit during the day, although night also brings an unrivalled sense of peace and tranquillity. Treatments themselves are long and leisurely, handled by staff who are clearly experts in their field, combining various techniques from other cultures with the more traditional Balinese massage. 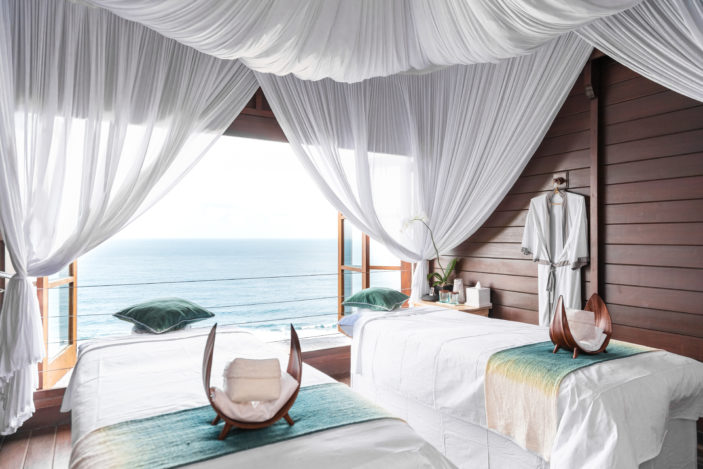 Make sure you’re back at Di Mare for sunset and a nice, relaxed dinner. Watching the sun drop into the Indian Ocean with a signature of reds and pinks is an essential sight here, complemented by an ever-changing menu that makes the most of local produce and international influences. Wellness juices and “high energy smoothies” are a nice alternative to alcohol here, but the wine list is well worth digging into. One glance to the dedicated, glass encased wine tasting room and anyone could tell just how important wine is to the restaurant, almost as important as the food itself which on my visit offered dishes like bamboo lobster chicken dumplings, purple yam and goat cheese agnolotti, rabbit rillettes, Burmese pork belly, Cambodian chicken curry, and a very indulgent dessert called the “Black Magic Candy Bar” – peanut shortbread, peanut butter chocolate mousse, palm sugar salted caramel, sorga chocolate ganache, candidasa sea salt and shiitake ice cream.

Breakfast here is also a winner, opting for a la carte with continental staples like French toast, Portuguese baked eggs, and eggs benedict, as well as quintessential Balinese day-starters like nasi goreng and bubur ayam. Light and healthy options are also a big focus here, and you can be sure the wellness juices, smoothies bowls and fresh fruit platters are some of the most popular orders.

Wine lovers can also head up to Temple Lounge, sitting directly above Di Mare with a similar European-inspired aesthetic, though there’s only one small bar up here and plenty of lounges shaded from the sun. 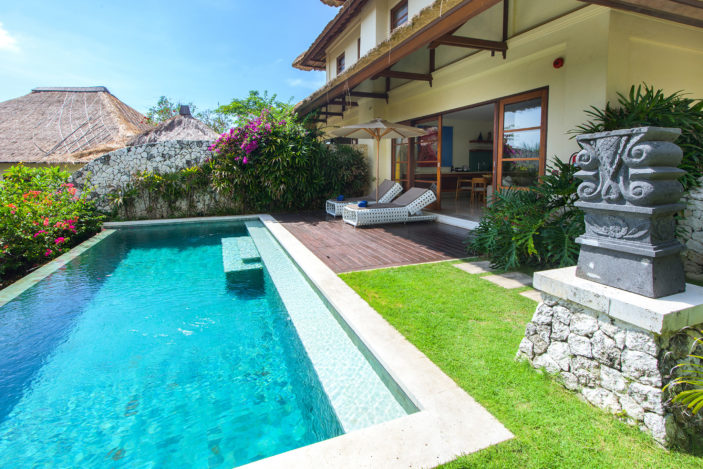 I haven’t even gotten to the villas yet, scattered around the cobbled lanes between Di Mare and the property, and even further on the other side replacing ocean views with tropical gardens. Staff in golf carts happily ferry guests back and forth across the hilly walkways, which aren’t exactly luggage-friendly. There are 54 villas in total, and while the ocean-fronted abodes would obviously make for the ultimate experience here, my three-bedroom garden view was far from disappointing. 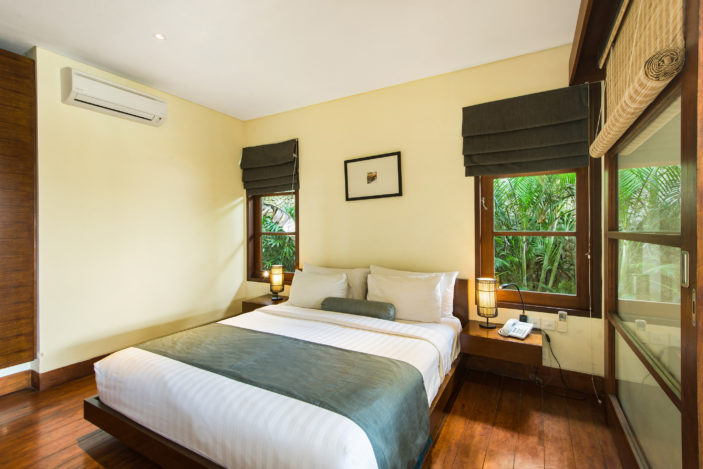 Each villa is gated and has its own lush backyard, which for me meant my own cabana, sun beds and private plunge pool. It’s a modestly sized but charming feature to look out upon from the comfort of the villa’s spacious lounge room and kitchen.

Two bedrooms are located on the bottom floor, each featuring their own bathroom, while the third master bedroom takes up the entire second floor with it’s comfy King, private balcony and massive ensuite. All interiors, consistent through the many generous spaces, are fairly uniform, sticking to safe, modern design complemented by elegant touches of locally sourced art. 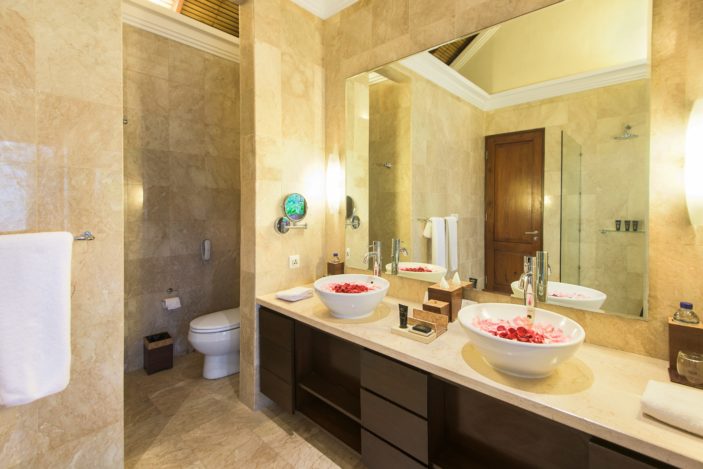 With four high-powered air conditioners (one in each bedroom and one in the lounge room) taking care of the hotter days, you can keep the villa from feeling too stuffy. Though, you’re never going to be able to just relax with the big glass doors properly connecting the inside and outside, simply because of those aforementioned monkeys. The monkeys roam in packs, and have clearly become accustomed to hanging around the garden villas since the tall trees provide a handy escape after they do their dirty work. And that dirty work is actually entering your villa and raiding the kitchen (you have to pay for anything they steal). It’s therefore reiterated to every guest to keep their doors locked at all times, since the monkeys are able to open unlocked doors.

I know because it happened to me, and while it’s amusing to see a group of five monkeys easily pull a door open and waltz in like you don’t even exist – even more so when you watch them outside peeling the fruits of their labour, staring back at you as if to say “what are you going to do about it?” – it’s also quite annoying.

Those wanting to head out of the resort to nearby Uluwatu Temple or the highly recommended Ulu Cliffhouse will have a taxi called for them at reception. And it’ll arrive in no time as well, since there’s a group of drivers stationed not too far from the resort in a small shack, between the main turn off and the resort entrance. This, however, is an issue visitors may not be aware of.

Since the introduction of rideshare services like Uber and Grab, there has been a rather ferocious pushback from (some) taxi drivers, often referred to collectively as the “taxi mafia”. Members of this group have been known to attack Uber and Grab drivers, something that has apparently become common enough to make it so rideshare workers will actually refuse to pass one of these outposts for safety reasons. It’s unfortunate then that Karma Kandara has an outpost cutting them off from the main road, which means if you’re ordering Uber or Grab to get somewhere then it’s likely they’ll ask you to walk the 10 or so minutes it takes to get back to the main road and meet them there.

Of course, those that don’t mind overpaying taxi drivers shouldn’t care either way. While it is a nasty piece of external transport politics that may be off-putting to younger travellers, who are now accustomed to these apps, it shouldn’t stop guests from getting out and really exploring one of the most beautiful and unspoiled parts of Bali.

The writer was a guest of Karma Kandara.