The Dead Sea can hardly be claimed as a new attraction.

When Christ was born not even 50km away, Cleopatra had already built the world’s first spas on the shore of the famously salty lake, so that she could bathe in the mineral-rich waters and retain her youthful looks. Clearly it worked, and many others have followed her lead in the millennia since.

Today the Dead Sea is divided between Israel and Jordan, and the shoreline is dotted with a range of resorts on both sides. Almost all of these are clustered towards the deeper northern end, and at the very tip is Ramada Resort By Wyndham Dead Sea. 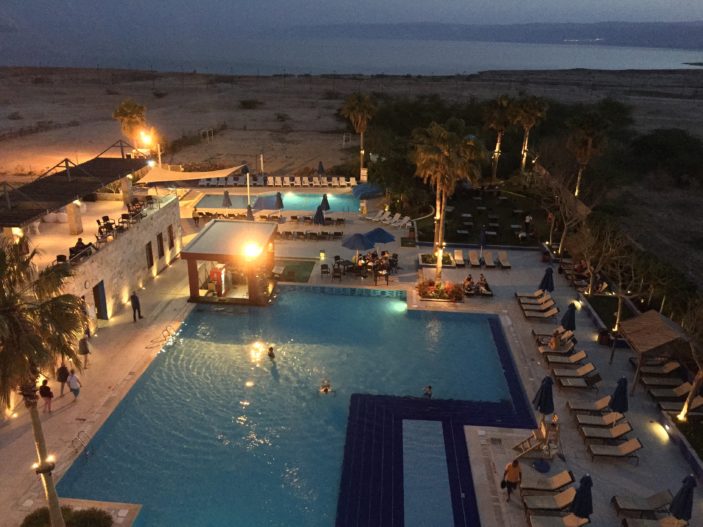 Originally built in 2006, the building was taken over by Wyndham in 2016, and its location at the northern end of the Dead Sea means that it’s the closest hotel to Jordan’s capital Amman, and Queen Alia Airport (the two are approximately 30km apart).

Located about an hour from either by car, the drive from the airport is by far the more scenic option, passing through valleys steeped in Biblical history and offering dramatic views across to the cliffs on the Israeli side.

To get to the hotel (or anywhere else in the region) you’ll need a car or taxi, because there’s not much else around – a small private hotel next door and some defunct buildings in the distance are the Ramada’s only neighbours.

That means eating in-house is the easiest option, and the large, airy room housing Elements restaurant is one of the busiest areas of the hotel. The included buffet breakfast has the usual mix of continental and hot options, though the Jordanian food like fuul, hummus, za’atar and labneh offers a welcome point of difference. And it pairs quite well with hash browns, too.

Later on in the day, the sunset terrace specialises in more subtle Mediterranean and Lebanese cuisine, and the open grill is a highlight. 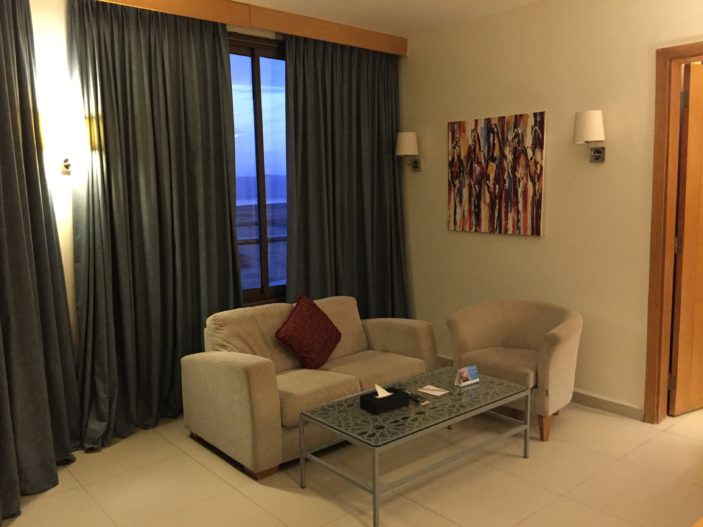 At 161 rooms, the Ramada Resort scrapes into the boutique category and the size compares favourably with some of the mega resorts and spas further south. As a result, the hotel is easy to navigate with just a single central corridor on each of the four floors.

My suite is at the end of one of those corridors, and consists of two small rooms. 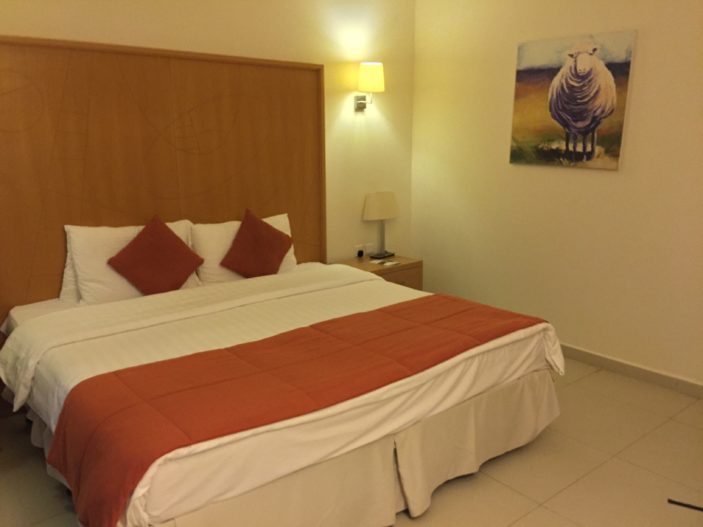 The comfortable king size bed takes up the majority of one room with just enough space for a desk and flatscreen TV while the other has a couch, armchair and small bar with a pod coffee machine.

Both rooms have plenty of light sources and a welcome abundance of AC outlets (including a universal plug that for some reason can take any plug except an Australian one).

The bathroom has a large shower stall and the fluffy robes are comfortable, but the emphasis here is clearly on comfort as opposed to luxury.

Floor to ceiling windows in both rooms means there is plenty of natural light but the best spot to enjoy the view is from the large balcony. It overlooks the hotel’s two outdoor pools and the Dead Sea beyond (more on that later). Both are heated in winter but it rarely gets cold here at the lowest point on earth – temperatures on average are ten degrees warmer than Amman.

The larger pool is long enough to do laps in and has a swim-up bar, while the smaller one has waterslides in a nod to the families that make up a significant portion of the hotel’s clientele.

While both pools are quite crowded, it’s another swimming spot that draws guests to this hotel. 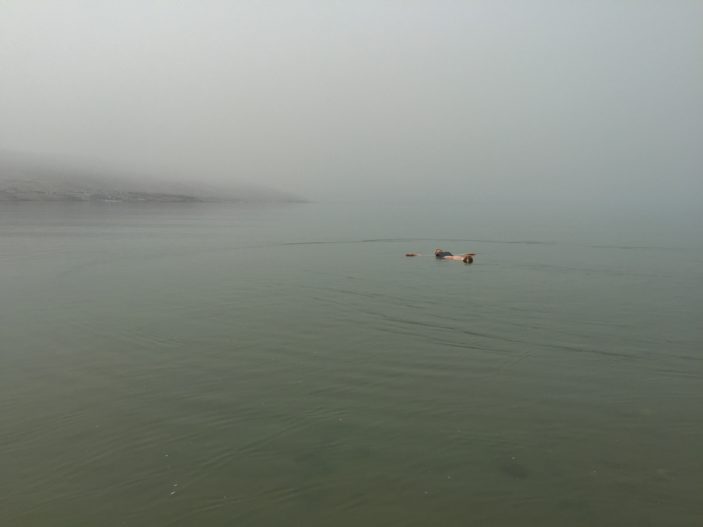 The Ramada Resort may have once been located right on the shore of the Dead Sea, but falling water levels mean that it’s now a 600 metre walk – or a one minute trip by minibus – to the artificial beach with sand and umbrellas, some shower blocks and a mudpit.

Part of the traditional bathing technique here involves slathering every bit of visible skin with dark grey, mineral-rich mud that is replenished several times a day and mixed with water until it’s the right consistency.

Then it’s time to go for a swim. Or rather, a float – the high salinity means that swimmers are incredibly buoyant and float on top of the water’s surface, leading to all kinds of photo opportunities. Just heed the warnings to keep your head above the surface and stay out of the water if you have even the slightest cut (and definitely don’t go in straight after shaving, unless you have your best Macaulay Culkin impression ready).

After indulging in that time-honoured beauty regime, the hotel’s spa and beauty treatments seem superfluous, but there is a moderately-sized fitness centre that is a lot quieter than the other public spaces.

With a 12 o’clock checkout, it’s easy to go for a morning dip before leaving and heading back to Amman, making this one of the most convenient and affordable ways to tick off the double superlatives of visiting the lowest point on earth and bathing in the world’s oldest spa.

The average nightly rate for a suite starts from AU$145.

With comfortable rooms, appealing food and a relaxed atmosphere, Ramada Resort By Wyndham Dead Sea is a pleasant place to spend the weekend but it’s the location that really sets it apart. Easily accessible from Amman, it’s a convenient base from which to explore the Dead Sea and the lack of neighbours means that it has a welcome air of seclusion.

The writer stayed as a guest of Ramada Resort By Wyndham Dead Sea.

Feature image supplied. All other images by Alexis Buxton-Collins.