Pacific Hotel Brisbane Review: A comfortable stay in Spring Hill, with an Asian influenced kitchen worth the trip 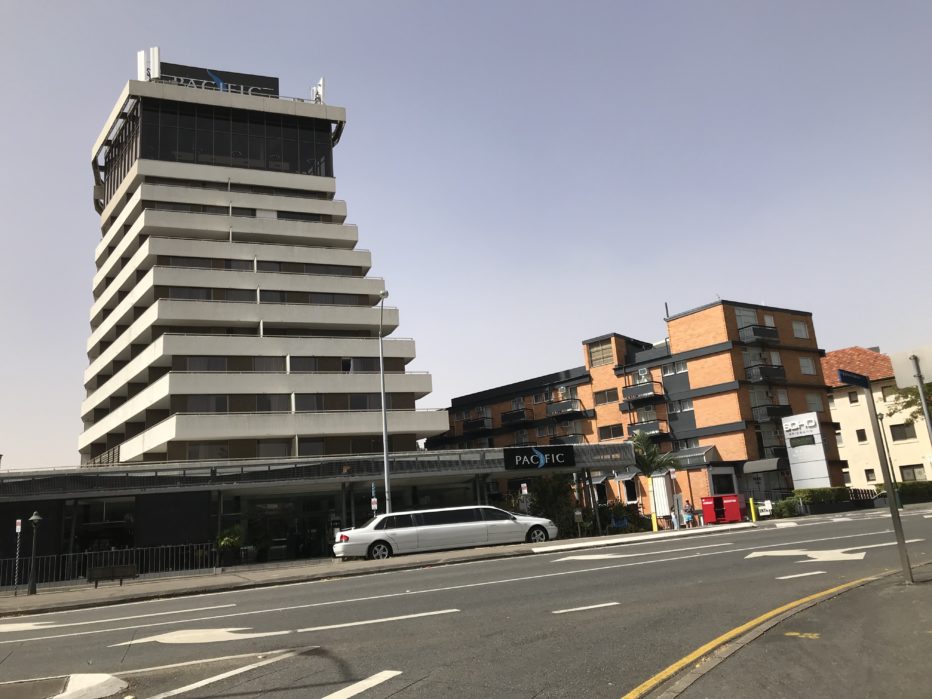 In Spring Hill, Brisbane, you might have driven past a white building with a fairly unique, cascading design. If you spotted it, you probably thought it was an ordinary office building. I can’t imagine how many times I’ve driven past it without noticing it. But office building it it not. Perhaps unsurprisingly, it’s been sitting there since November 1970, where it first opened as the Gazebo Terrace Hotel. It wasn’t long before it was recognised as one of the city’s best International hotels, and it also featured an acclaimed restaurant on the 10th floor.

The hotel as it is today was opened only last year as the Pacific Hotel Brisbane, taking on the $10 million refurbishment that the hotel enjoyed back in 2006, and adding some new features to it along the way. Honestly, they’ve done such a good job with the update, it may as well have been built yesterday!

Entering the facilities, you’re greeted to a bright, comfortable building with friendly staff at the front desk. Honestly though, there’s nothing about the hotel that strikes you as unique; it really feels like an everyday, run of the mill hotel. There’s a pool out the back, a lobby restaurant, function centre, gym – all with a fairly relaxed colour scheme that isn’t designed to stick out in your memory.

So that’s why some of the hotel’s inclusions my surprise you. We’ll get to that lobby restaurant a bit later, but let’s start with the bedroom, which you’re led to through the hotel’s bright hallways. The first thing I noticed – and take this as you will in terms of my priorities – was that the room’s air conditioning is phenomenal. On the wall is a massive flat screen smart TV, which allows you to enjoy Netflix. A must for any modern hotel room. 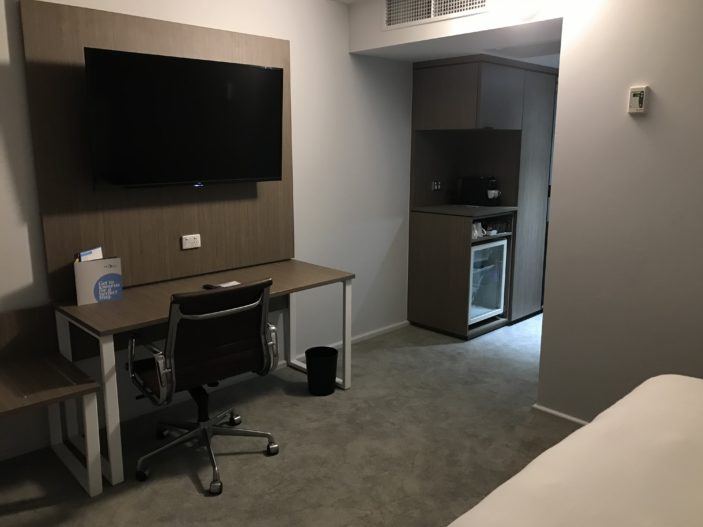 There’s no mini bar (which is another must for a modern hotel room, in my opinion), but they’ve kept the bar fridge, and offer room service. There’s complimentary Nero Coffee and Thomas Lipton tea, with a Capino pod machine, and a kettle. You’ll find milk and a couple of bottles of water in the fridge. There’s also a safe, iron and board, and a hair dryer in the bathroom. You’ll even find two fluffy robes in the closet, which was a pleasant surprise. It truly ensured you were as comfortable as you could possibly be in the space. They even give you a balcony! My only gripe was that amongst all the modern upgrades they didn’t have USB chargers by the bed, but the AC plugs did just fine.

They’ll give you $10 to forgo housekeeping, if you’re staying more than one night of course, which is one of their Green incentives (and to be applauded), and the bathroom is comfortable and modern with a fantastic shower and Biology amenities. 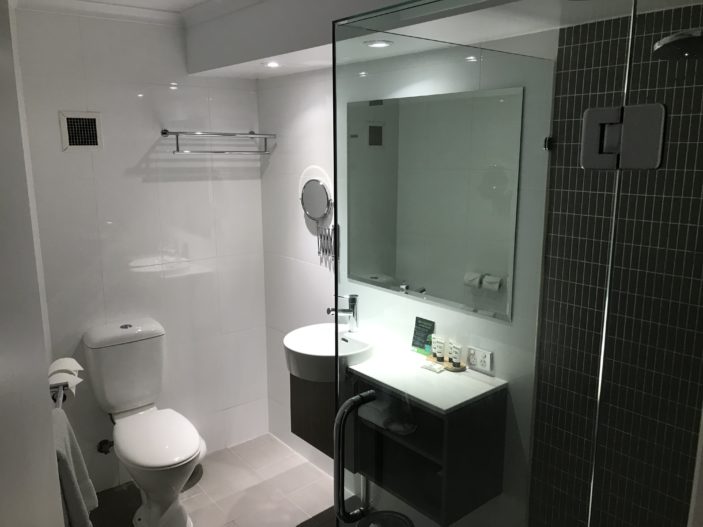 The King bed is supremely comfortable, with great pillows and a comfortable chair to lounge on next to it. There’s no greater feeling than ending the day lounging on a bed like this and getting to log into your Netflix account and watch an episode of The Good Place before falling asleep. 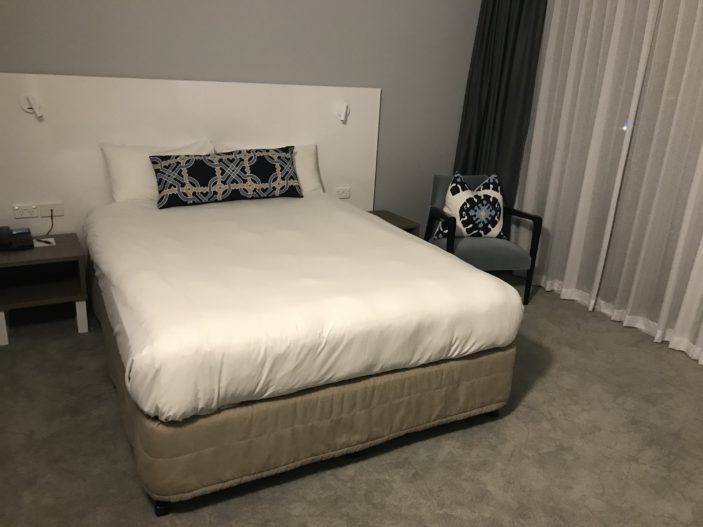 Beyond the comforts of your room, the outdoor pool is open from 7am to 10pm, while the gym is open for 24 hours. Keeping with the tradition and history of the building, there remains some great food on site – though it’s now in the confines of the lobby, at the Pacific Bar & Kitchen; a restaurant which attracts both locals and those staying in the hotel. On first glance it seems like a pretty basic hotel offering – but as this hotel has already come to prove, looks can be deceiving.

Food is served from 6.30am until 9pm, with an excellent breakfast buffet served to 1030am. You’ll get all the hot and cold breakfast options you can think of there, definitely fit it into your schedule! There’s a lunch and bar menu from 11am (with the bar menu also your room service option) – burgers, pizza, salad, chicken wings – the usual attire. It’s good quality food at a decent price. And there’s even $5 beer and wine from 5-7pm! Not to mention an impressive spirits menu. 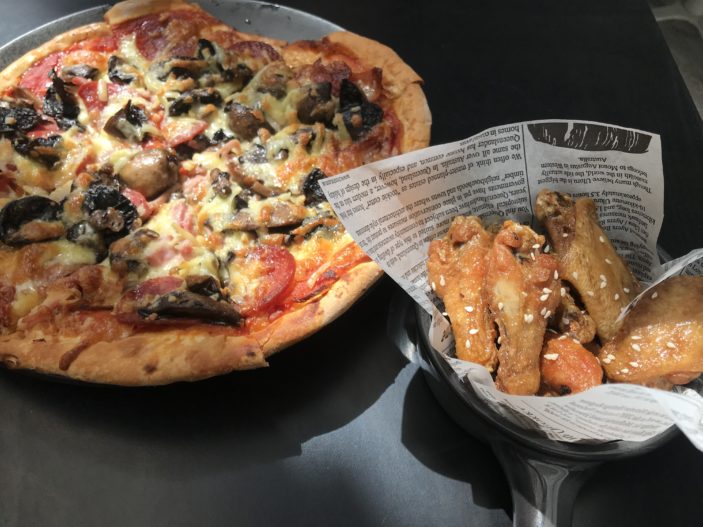 After experiencing their lunch and bar menu, it came as something of a surprise that their dinner menu features a mix of Asian influenced dishes, such as a five spice and dark soy braised beef, or pea and wasabi dumplings for starters. Then there’s the miso baked eggplant, or a dry aged sirloin served with hot radish and enoki mushrooms for the main. 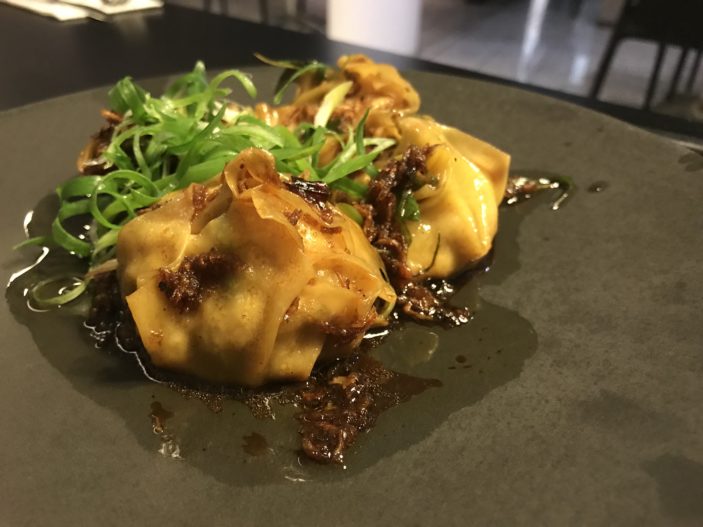 I started with steamed chicken and leek dumplings, marinated in crab oil and black vinegar (I mean come on, how amazing is that combination!), topped off with shallots. I was truly impressed by the quality of the food. Having enjoyed dumplings all over the world, to have enjoyed something of this quality in a hotel in Spring Hill came as nothing short of a surprise.

For the main I had a Korean curry duck leg – certainly a unique take on a variety of classic dishes here. The leg was accompanied by bamboo shoots and greens, with a sweet potato noodle (Japchae) stir fry. It was a spectacular dish, with a nice spice to it – and I loved the blend of flavours that made it something truly unique. To check out the full menu, head HERE.

And for those wondering what came of the space that once housed the acclaimed restaurant on the 10th floor, visable by its black windows in the headline photo, that’s now a state-of-the-art functions and event space!

You can walk to Roma Street Station in about 13 minutes, and there’s a bus stop for the free Springhill Loop service out the front of the hotel. So public transport has you sorted. Central Station is a similar distance, with the Queen Street Mall & Brisbane CBD just 10 minutes from the hotel. Across the street you’ve got the beautiful Roma Street Gardens and Suncorp Stadium is about 2k away. Suffice it to say – this is a central hotel.

In as central a location as you can get, the Pacific Hotel provides a truly comfortable stay with many of the amenities you have come to expect in a modern hotel.

Gone are things like overpriced mini-bar, and in their place is a huge TV with Netflix! And their on site bar and restaurant is among the best I’ve encountered in Brisbane. The only real criticism is that there’s not much of a “vibe” to the place – the large rooms and simple colour scheme does make the place feel like “just another hotel”.

But it is misleading given what they do offer, and that vibe does nothing to affect the stay – after all, comfort is king. Not to mention, the fittings feel like they were installed yesterday, so don’t expect anything less than the most modern of amenities.

For those looking for a comfortable bed in a great location, in one of Australia’s finest cities, with a fantastic meal to boot, you need look no further than the Pacific Hotel.

The Pacific Hotel Brisbane is located at 345 Wickham Terrace, Spring Hill. To book your next stay at the hotel, head HERE.

The author stayed as a guest of the hotel for one night. Photos by the author.