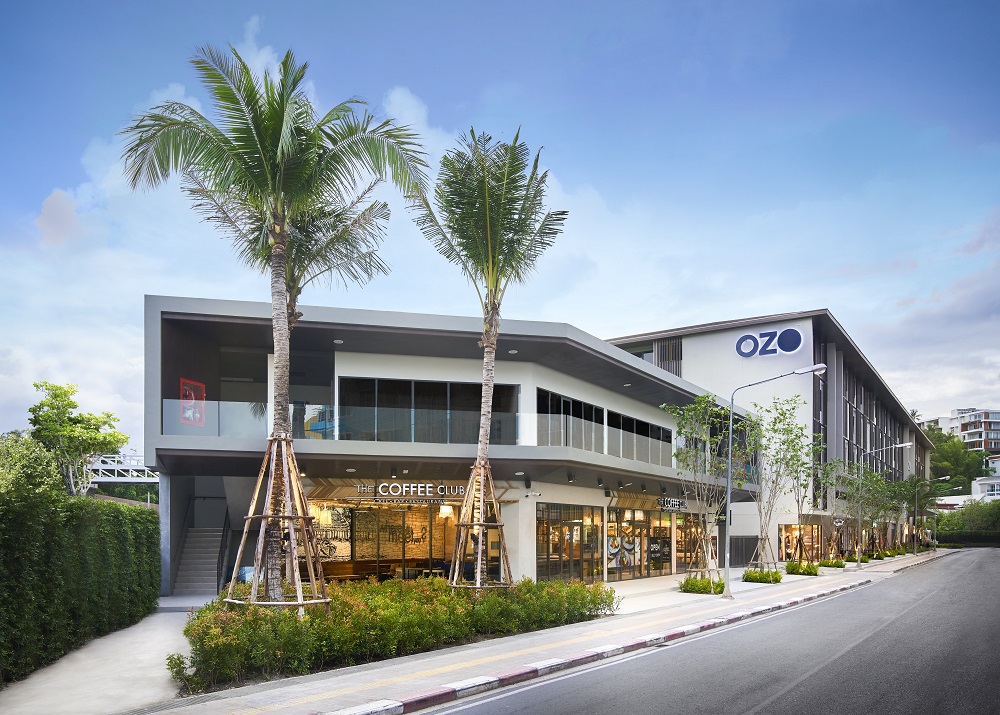 It’s complicated with Phuket. Much like Bali, the popular holiday destination has many different sides, with some suffering under the weight of overtourism while others shine with untouched pristine beauty.

Kata Beach almost sits at a comfortable middle, although it’s much closer to the more relaxed side. Quiet and downbeat, the area boasts direct access to one of the island’s best beaches. Avoid walking one particular strip lined with shady looking bars, and you’d swear this was the most family friendly part of Phuket.

The nearby Club Med may be a reason for this. Such a dominant, supersized resort has kept competition to a minimum where lodging is concerned, which in the past has meant less tourism, in turn discouraging clubs and noisier party-focused bars. It’s a beautiful cycle of relative calm that has kept Kata beach the way it is.

Although while hotel chains have looked elsewhere in Phuket, Thai favourites ONYX Hospitality Group are more than ready to make their own little groove in Kata beach with the opening of OZO Phuket, the first for their mid-range brand on the island, and a fantastic choice for those on a more modest budget looking for maximum value.

The Heart of Kata

OZO Phuket is on the main strip of Kata Road, directly opposite from a 7-11 and various other stores, including a credible massage parlour, lowkey bar with outdoor seating, and the area’s fabulous night markets.

The night markets are of particular interest. Guarded by giant statues of Marvel’s Hulk and a heaving gorilla, this buzzing tented market is full of street food, gifts, clothes and accessories. It’s perhaps the only thing even closely resembling a party hub in Kata, with locals and tourists happily sitting around eating, drinking and shopping.

From Kata beach, which is an easy 1-2 minute walk from the back of the hotel, anyone can also catch a long-tail boat around Phuket’s many smaller islands. Having that option so close to where you’re staying should is easily one of the high points of staying at OZO.

Although if sweeping views of Phuket’s lush landscape is something you’re after, take the short drive from OZO to Karon Viewpoint. The famous lookout is one of Phuket’s most stunning, with stunning vistas that scan this side of the island. Or if that isn’t enough for you, drive a bit further to Promthep Cape, the best lookout on the island and a constant favourite for sunsets.

A Playground for All 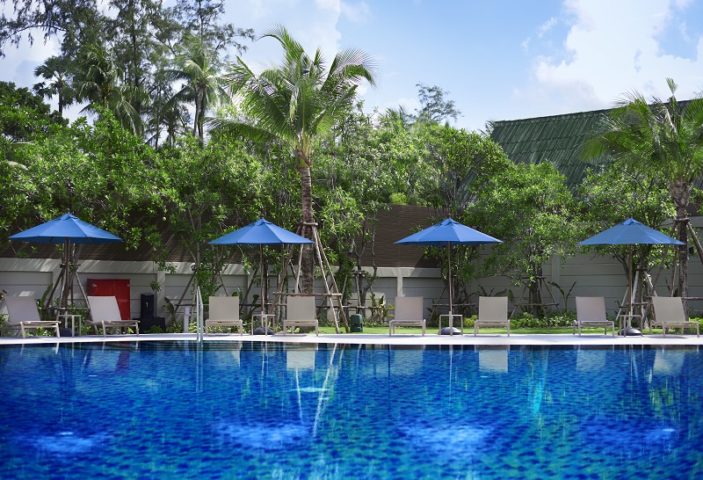 Pass the hotel’s spacious modern lobby, which opens up into the street with it’s bright creamy monochrome and randomly placed swing seats, and you’ll be greeted with a gigantic backyard for the hotel.

Odd looking empty waterways zip around the largely green space, which leads to the hotel’s “EAT” diner as well as a bar with outdoor seating overlooking the large adult swimming pool. Skirt a bit to the right and you’ll be at another pool, decked out with kid-friendly activities like a giant slide and a resident giant toy octopus named Ollie. 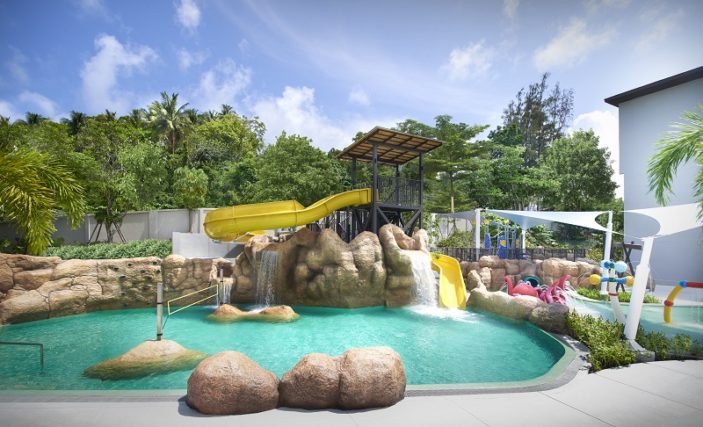 Having two vastly different pools is a nice touch which speaks to the hotel’s family friendly vibe. It’s also part of a series of thoughtful design curves that includes having only one, constantly monitored entrance -the street-facing lobby – and a wide playground so younger children don’t wander off but still have plenty of space to run around.

Aforementioned EAT is the spot for a modest but valuable breakfast buffet, lunch and dinner. The a la carte menu features most of the expected mix of Western and local Thai dishes, as well as a strong focus on good quality smoothies and juices.

The hotel’s progressive culture is clearly influenced by GM Paul Halford, who puts a great deal of emphasis on reducing the property’s plastic footprint – something sorely needed in Phuket. This means a paperless check-in, bamboo straws, and even plant-based water bottles. 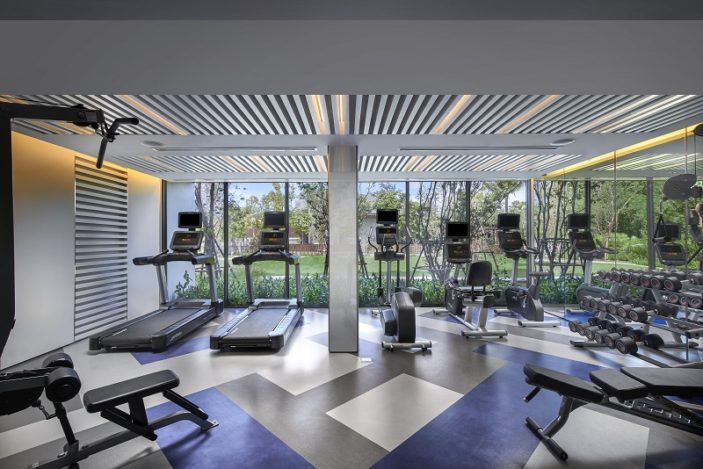 Continuing those inflections of wellness is a beautifully air conditioned fitness centre located just a few metres from reception, looking out to the beautiful garden area with various machines and free weights. It’s but one of the true non-room escapes from Phuket’s sometimes punishing dry heat, the other being a thoughtful ‘chill room’ with iMac workstations, ample seating and a pool table.
It’s not much when compared to OZO’s bigger and more expensive neighbour, but for the price tag, this hotel does plenty to up its value and provide guests with a well-rounded hospitality experience to make exploring the island that much more enjoyable. 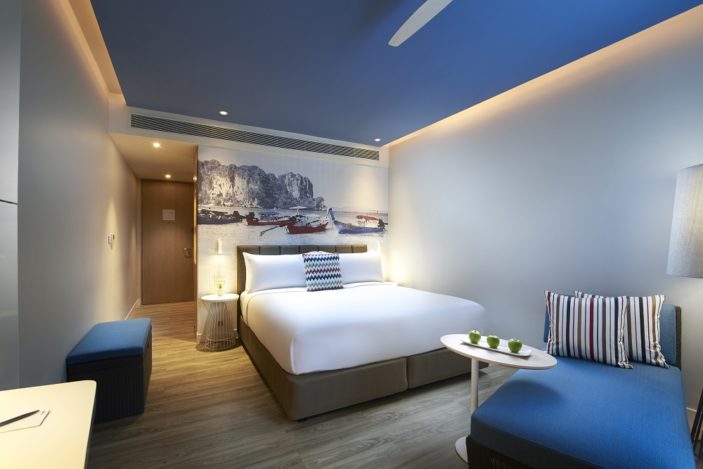 At 27sqm, my “Dream” category room was just large enough to move around with sufficient space. A private balcony overlooked the garden – a welcome sight each morning, as plenty of light pours in – preceded by a comfy chaise lounge that added a bit of character to the room.

The faded artwork of long-tail boats docked at Kata beach sat at the head of a soft king bed, and the bathroom wasn’t nearly as tiny as I expected. 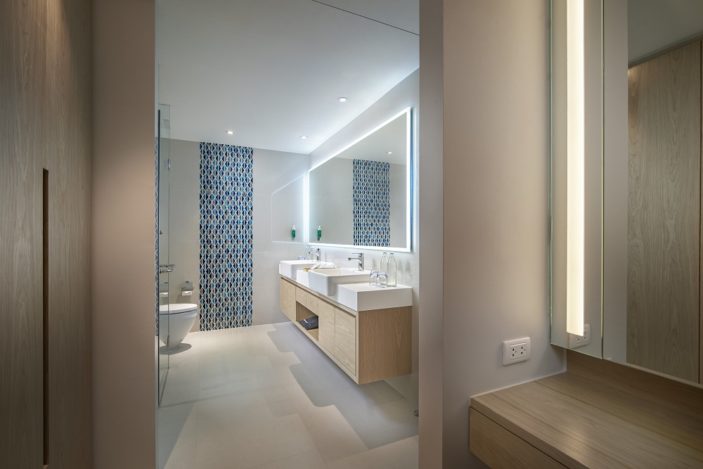 The limited space the designers had to play around with is used remarkably well, bringing in just enough personality to distinguish this amongst other Phuket hotels in the same range. It’s all bright, modern, tech-forward (there are even international sockets and chrome cast) and incredibly refreshing, especially when looking down upon the garden instead of the street.

The hotel has 225 guest rooms and suites, all differing takes on the same model across seven categories.

Service with a Smile

It seems to be a small team that handles OZO Phuket, which in turn gives off a more boutique and focused vibe when it comes to service.

As such, it’s all friendly, all smiles, and exactly what you’d want from Thai hospitality. Plus, Kata has many hidden gems splayed across its laid-back streets so it certainly helps that the reception team are approachable and in-touch with the property’s surrounds. Just ask them for a few recommendations before you step out and they won’t let you down.

Currently, OZO Phuket are still in the midst of their opening sale which has rooms starting from AU$90. That’s exceptional value for a hotel like this, in a beachside location like Kata. Though that is for stays until the end of October 2019, after which the price will make the very small leap to starting from AU$115. You won’t find many places that can offer that kind of outstanding value, nodding to the clever compromises OZO have made to keep prices low but still offer a great stay. You may not be wrapping yourself in Phuket’s most luxurious digs, or eating the island’s greatest food (go to the Sunday night markets in Phuket Old Town for that), but you’ll save big without going budget.

The writer stayed as a guest of OZO Phuket. This is not a sponsored post and all opinions are that of the writer’s.