Gold Coast is a city built of soft sand and hardy skyrises. At least that’s the short version of it, with the famous beach destination unfairly shouldering the burden of many rash stereotypes throughout the years, the most unfortunate of which has to do with the raucous yearly celebration of “Schoolies”.

Much like Canberra and its connection to politics, many Aussies grow up with the idea that Gold Coast is only to be kept as either a family adventure filled with theme parks, a quick two-day getaway to relax on the beach, or a hedonistic party parade down the seedy club strip of Cavill Avenue. But is it really the cultural black hole of Australia? I was once in that group of people, but multiple trips up to the Gold Coast over the past few years have shown me just how wrong I was.

There’s also fantastic dining, an enthusiastic and ever-growing music culture and, most recently, a burgeoning arts scene. Sure, you’ve still got the achingly uncool parts, but with these five essentials, any misunderstandings you had all these years about what the Gold Coast actually is will surely fade.

Home of the Arts

Though the riverside Gold Coast Arts Centre has been around for decades, it wasn’t until last year when this multifaceted property was rebranded, refocused and reimagined into Home of the Arts (HOTA), and it’s bringing some serious creative weight to the beach metropolis. Ever since, it’s gone from being an arts centre to a full-blown communal precinct, with a lake, parkland and a huge outdoor stage (last year, it hosted a “concert for dogs”) plus the building itself.

It’s here you’ll find theatre shows, regularly running arts festivals, and a strong dedication to transforming the idea of Gold Coast and what it can be for both locals and holiday-makers. The programming reflects that, from the shimmering outdoor installations of GLOW Festival to more than 50 works of local theatre spun into the Short + Sweet Festival which, earlier this year, hosted everything from ramen documentaries (paired with ramen cooking classes) to improv in an underground theatre.

Clearly, if Gold Coast is propelled towards becoming Australia’s new hotspot for the arts, HOTA is spinning like crazy. You can check out their website HERE. 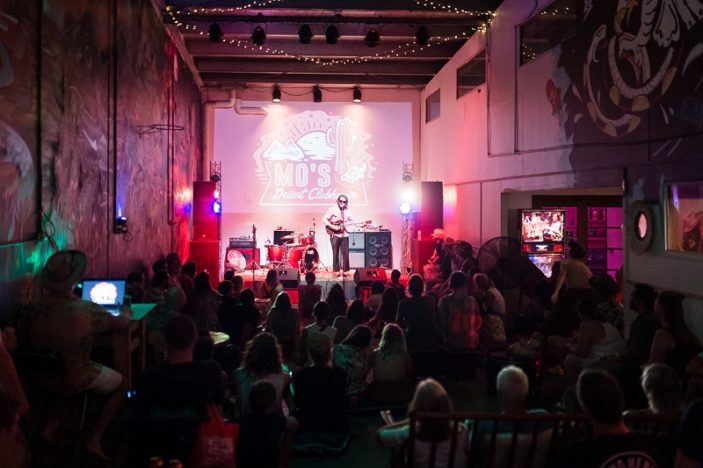 Epic murals are hard to find on the Gold Coast, but they’re there if you know where to look. Nine different public artworks were created as part of last year’s Water Walls (more info HERE), which showed the City of Gold Coast were serious about change with their biggest urban art project to date. Although my personal favourite mural can be found in a gritty warehouse turned creative space in Burleigh Heads, dubbed Mo’s Desert Clubhouse.

Birthed from a chance encounter at Nevada’s iconic Burning Man, the makeshift space has been a hotspot for intimate performances from Australian musicians, vintage designers, makers and general creatives since it opened in 2017. Aesthetically, it’s been charmingly built with a DIY look and said favourite mural writ large on an entire feature wall. The artwork, a 20 metre psychedelic storyboard of Mo’s conception from Nevada to Sydney, was handled by artist Mystic Rufio who has given the warehouse a tremendous sense of place.

They host regular gigs from big name Aussie acts so it’s best to check out the schedule over on their website HERE.

You have to really know where you’re going if you want to find local favourite Dust Temple. Defying category in the oft ignored (at least by tourists) suburb Currumbin, this fascinating and beautifully designed venue is a café, art gallery, event space, cocktail lounge, live music venue and communal hub wrapped tightly into one, shouldering much of the weight of Gold Coast’s hidden hipster scene.

Whether you’re here for the quality Fonzie Abbott coffee during the day, the live music at night, or just to find somewhere creative locals commune, Dust Temple is clearly one of the most exciting spaces on the Goldie. The best part is that the venue is so transformative, with local start ups hosting live-drawing classes, poetry nights, and various other performances while the exhibitions displayed inside and outside of the venue change regularly.

What Dust Temple will be when you go is anyone’s guest, so it’s best to head along to their website at dusttemple.com.au before you take that 15-20 minute Uber ride.

You can’t do a hop around Gold Coast’s trendiest spots without including a food hall. Head on over to Miami Beach any Wednesday, Friday or Saturday and join the trendier locals as Miami Marketta springs to life. The covered outdoor dining precinct proudly represents a vast array of cuisines from around the world, with a curated line up of food vendors serving up all types of food from American BBQ and Greek souvlaki, to homemade dumplings and supersized desserts.

Although even if you aren’t hungry, it’s worth heading along to both people watch and hop around the four small bars dotted around the area, which list a whole heap of drops from boutique wineries and craft breweries. It’s a vibe, especially when your parked up watching up and coming independent acts acts on the central stage.

More information an be found at miamimarketta.com.

If you’re heading along to Miami Beach, and you’re a keen muso, make sure you pop by Fenech Guitars. It’s run by renowned acoustic luthier Aaron Fenech and is now an indelible part of the Australian music scene. He’s made custom guitars for some of our best musicians, as well as runs workshops on occasion where people from all over the world book in and fly to the Gold Coast just to make full use of the unique tonal qualities of native wood.

Locals don’t really go to Surfers Paradise. They may pop as far as Broadbeach, which still has its fair share of trendy hidden bars, fantastic food, and some of the city’s best hotels, but you won’t really find them any further than that. It’s most likely they’re hanging around Burleigh Heads, which has fast become known as the bohemian, health-conscious and incredibly hip part of the Goldie.

Although they’ve lost the incredible Burleigh Social, there’s still plenty of communal hangs and trendy cafes like Social Brew. Although it’s hard to look past the fact that they’ve got the best spot of beach on the Gold Coast, which keeps regularly quiet and is complemented by the incredible >Rick Shores restaurant and, on top, the breezy >Burleigh Pavilion and its sun-soaked eatery The Tropic which was recently redone and is now one of the most popular spots in the area.

The writer flew to Gold Coast as a guest of City of Gold Coast. This is not a sponsored post and all opinions are of the writer’s.