Positioned near the CBD end of Chapel Street, The Olsen remains one of the favourites of Art Series Hotels’ ever-expanding portfolio of gallery-like, boutique-minded properties. It owes much of its understated elegance to the works of John Olsen, whose delicate landscapes feel a world’s away from the group’s first property, nearby The Cullen, where the work of Adam Cullen pops with wry humour and a lively, pithy wit.

The Olsen was also – when it first opened in 2010 – the first Art Series property that truly felt like a full-service luxury stay, with a gorgeous glass-bottomed pool overlooking hurried scenes of urban rush, an expansive rooftop deck perfect for bathing in the summer sun, and apartment-style rooms that flowed with the same kind of lyrical, abstract beauty of John Olsen’s work, which – in uniform Art Series style – breathes life into guest rooms and public areas.

Those looking for a staycation to explore dynamic Chapel Street are in very good hands, but first-time visitors to the trendy city will find the most value here. You’re not in the typical heart of the CBD, but The Olsen is close enough that almost everything is a short tram-ride away. There’s also to chance to really dip into the local life and explore the bustling neighbourhood, which lays claim to the historic Prahran Market. Much like The Cullen, you can easily save money by buying top quality produce here, and then making use of the nicely stocked modern kitchenette, which is a feature of all room categories.

If dining out is more your thing, then you’re surrounded by some of Melbourne’s best casual and fine eats, including – but not at all limited to – Mr Miyagi and Two Wrongs, the latter of which is directly underneath The Olsen and does up some of the best tacos around. 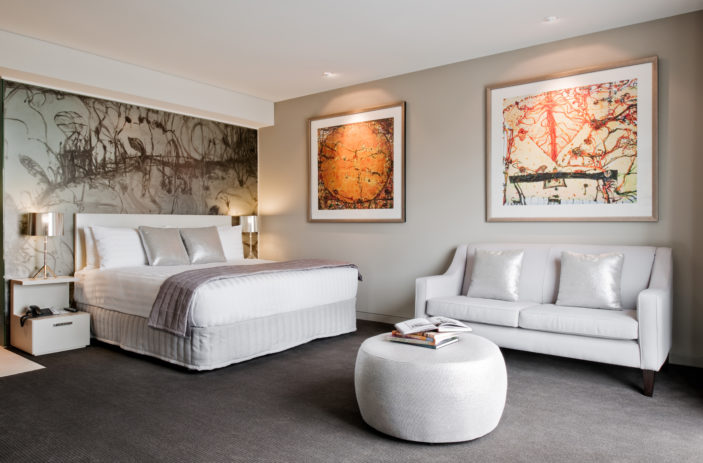 My Deluxe Studio Suite offers a good amount of space at 35sqm, natural light beaming onto the plush Art Series Signature King bed. Aesthetically, the palette opts for the neutral, leaving the colour to John Olsen, whose works stand out even more against the plain base. Impeccably dressed, the scene is still one of the crowning achievements for Art Series and speaks to the delicate balance that makes The Olsen’s guest rooms so alluring. Aside from the kitchenette, the expected creature comforts make an appearance, from the 42″ flat-screen to the small but cosy and sleek modern bathroom.

The inspiration glowing from Olsen’s pieces certainly atones for the view, which is unfortunately interrupted by nearby buildings and doesn’t reach as far as say that of The Cullen, which peeps over the Prahran market and presents a much better vista of the CBD. 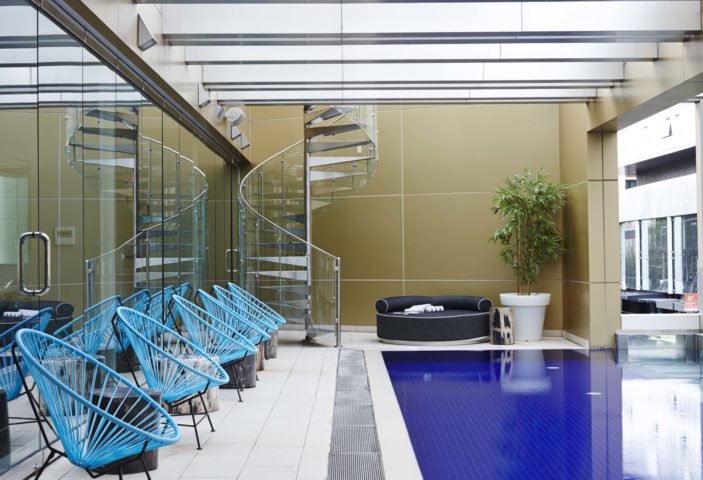 As with all Art Series, guests can book a complimentary tour with the property’s in-house art curator. It’s something essential for the art lover taking up temporary residence here, and extending that by exploring the several nearby galleries up, down and off-Chapel is highly recommended. Break up the day by grabbing one of several art books from your room and taking it over to the aforementioned pool or rooftop lounge to zone out for a few hours and dive deeper into the immersive art experience The Olsen presents so well.

Other valuable features of the hotel, especially for those who are spending all day walking Chapel Street, is the property’s very own boutique hair salon, simply titled Salon A, and a day spa, dubbed Norbu Urban Retreat. I didn’t try either on my stay, but if The Olsen’s consistency is anything to go by, a visit to both wouldn’t be a bad idea.

Spoonbill, accessed via the immaculate lobby directly opposite reception, is the hotel’s scene for breakfast, lunch and dinner. Again, I didn’t experience any of the food here, but I can vouch for the cocktails: classics that are well up to Melbourne’s lofty standards.

Though it’s almost nine years old, The Olsen constantly feels like a refreshing and essential piece off Melbourne’s modern hospitality space. It’s a testament to both Olsen’s art and how it has been expressed, with Art Series making full use of their instantly recognisable signatures to put together one of the city’s very best hotels.

The average nightly rate for The Olsen starts from $209 AUD

The writer stayed as a guest of The Olsen.