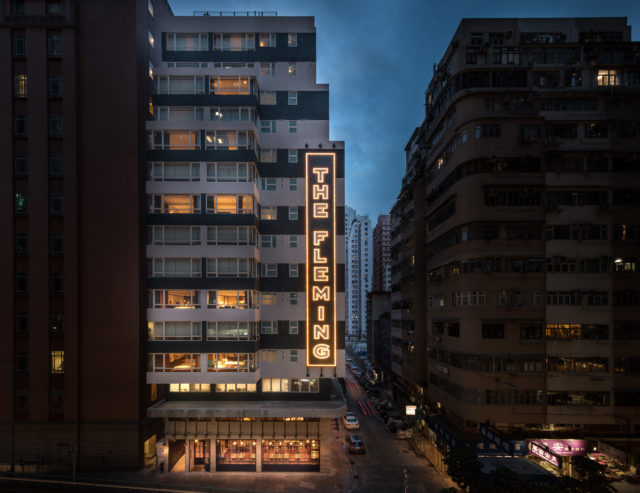 Boutique hotels are at their best when you can see the sincerity in their design. Soulful touches and nostalgic nods to the property’s primary source of inspiration, whether that be a neighbourhood, a concept or a nearby institution, is always appreciated and is what ends up the most memorable part of any stay. The Fleming is an example of a hotel that gets their aesthetic and character absolutely right, taking a more-is-more approach to high concept design and making no secret about where their loyalties lie. In this case, it’s to the iconic Star Ferry that has been running between both sides of Hong Kong for decades, hence a greatly finessed nautical theme that, though explicit, never feels tacky or overdone.

Hong Kong’s maritime heritage has been carefully mapped, deconstructed and sketched onto every inch of this hotel, which is housed in a rather narrow building that squeaks with the history of being a both budget accommodation and serviced apartments before The Fleming first opened in 2006, and went through its major refurbishment in 2017. A strong sense of place, speaking to its location in Wan Chai, and a love of subtle 70’s industrial era Hong Kong, further layers on the complex character, absolutely transforming the obviously worn building into one of Hong Kong’s most treasured boutiques.

Straight off the street and into the narrow opening doesn’t inspire much confidence though. The elevators you’ll eventually reach are tiny and slow, the short hallway smells musty, the walls have definitely seen better days and the 24/7 concierge desk is awkwardly placed in the corner – empty on my arrival, but manned by friendly staff at all other times. The real magic starts on the first floor lobby. Though the reception area is small, the space is energetic and bright, beginning the trail of elegant woods, glowing carmine reds and deep shades of blue that bring The Fleming to life. Behind the reception desk is an attractive display of all the room numbers in a style inspired by vintage post offices, glowing a bright red and facing a modest amount of lounge seating, stripped in beachy blues and whites.

Make a quick note to duck into the reception-level bathroom before you head on up to your accommodations. It’s the only space which moves away from the ferry theme and sports an ostentatious look, with the floor made up entirely of gold coins, shining off the walls which are coated with the lucky colour red.

There are only 66 guest rooms beyond this, split into four room categories which start from a small 20sqm. My large room is around 30sqm, features two small but comfortable single beds, and is a strong continuation of The Fleming’s theme. This time dark bottle greens, chestnut browns and a huge love of showy brass fittings take priority. It’s an attractive scheme, combined with charming details like the numerous glowing brass dials used for lighting (more on that soon), and a switch above the rounded entryway’s peephole resembling a ship’s telegraph, scrolling between “Clean My Room” and “Do Not Disturb”.

Like the rooms themselves, the bathrooms are decent in size but not overly generous. A deep rounded basin with brass fixtures looks beautiful against the deep green tiled walls and rounded porthole-like mirrors. The walk-in rain shower (with an enormous brass shower head) is a comfortable space with a thick industrial looking sliding door, and the apothecary-inspired custom made “Shen Nong” toiletries are a nice touch.

Perhaps the most interesting touch is that each guest room features wooden railing which track around the walls near the ceiling. I’m told that this is because a lot of local artists regularly stay at The Fleming, and the railings are so they can hang their local artwork to bring their own aesthetic to the hotel.

What the room sorely lacks, however, is a master catch-all switch for the many different light fixtures which illuminate the corners. The circuitry is rather odd, and trying to blanket the room in darkness at night is a bit of a puzzle, especially since the light closest to the door seems to flick on with motion, so sensitive that even slight movement while in bed would turn it on.

This being Hong Kong, the fact that the hotel doesn’t have a pool, spa or gym should be expected. Thankfully, longer term guests looking to keep up their fitness get complimentary access to Goji Fitness Studio which is just down the street.

A coastal Italian restaurant, Osteria Marzia by Black Sheep Restaurant Group, is attached to The Fleming and it’s lovely blue glow and energetic atmosphere blends in well with the hotel’s aesthetic. This is the site of many late-night cocktails and sociable dinners, with the space quite popular in the evenings. By day, it’s an excellent place to sit for a quite a la carte breakfast.

Location is another thing speaking highly for The Fleming. It’s located near the heart of Wan Chai, but also skirting the edges just enough so it’s close and convenient for any event at the Hong Kong Convention & Exhibition Centre. The enormous building, which recently hosted the city’s three-day eSports and music festival, is but an easy five minute walk from The Fleming.

You’re also only a street or two away from the famous Kam’s Roast Goose, restaurants like Loyal Dining, local favourites like Honolulu Coffee Shop, and Wan Chai’s well-connected MTR station. If you’re looking to explore Hong Kong’s trendier neighbourhoods while also staying in one of the more traditional areas on the island side, then The Fleming is a very wise choice.

The writer stayed at The Fleming as a guest of Hong Kong Tourism Board.