Two train stops from Singapore’s shopping street, Orchard Road, lies Oasia Hotel Novena. With its own lift access to the Novena MRT station via its basement level (which also takes you directly to/from your room floor), you’re instantly connected to the rest of Singapore. Nesting between three hotels, this hotel attracts a lot of medical tourists – though fret not, the hotel and its rooms are well sealed from the noises of the outside world so you won’t be hearing any ambulances in the middle of the night.

Oasia Novena’s interior is rather earthy, with its wood and stone walls and floors, there’s a nice sort of Zen vibe you get when you step through its entrance and it stayed with me throughout the layout of the hotel. The large poolside is littered with little palm trees and features a sizeable pool that I sadly was not able to use thanks to the rainy season arriving slightly earlier than usual this year. Sticking to the hotel’s wellness brand, there is a 24-hour gym and hotel guests can take part in morning yoga classes on select days of the week, no matter the weather. 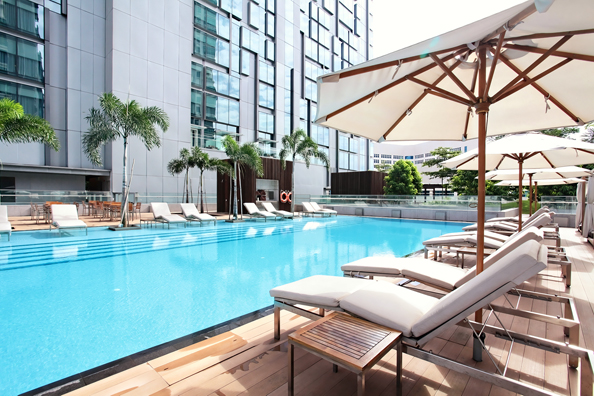 I stayed in the hotel’s “club king room” which maintained the hotel’s earthy theme (but this time with carpets!) and featured huge windows that gave my room loads of natural light with a view of Novena’s greenery, a welcome change from skyscrapers and city sights. The massive king-size bed with what felt like a memory foam mattress and comfy pillows gave me possibly the best sleeps I’ve had all year, no joke.

As I entered the large room, I was greeted by a plate of fruits on the room’s desk and the room’s TV telling me that what kind of yoga I could do in the comfort of my own room. I also had a “welcome” tote bag that had a gym towel (this hotel really sticks true to its brand), a wooden calendar, and a biodegradable container and cutlery set – I apparently was one of the first guests to receive this bag. I had free reign of the room’s refreshments, which included coconut water that was topped up every day and sitting on top of the fridge sat bags of TWG tea and a small Nespresso machine, with a third-party capsule brand that I’m not sure the name of. But it was delicious!

On the desk is an ample amount of UK- and one international power sockets with USB slots, allowing you to charge all your things at once, something I very much appreciated since I needed my phone, laptop, camera, and battery pack charged up every night. If you’ve forgotten to buy a roaming package or a local sim, you don’t have to worry: the hotel offers a complimentary “Handy” mobile phone that provides international calls and data. 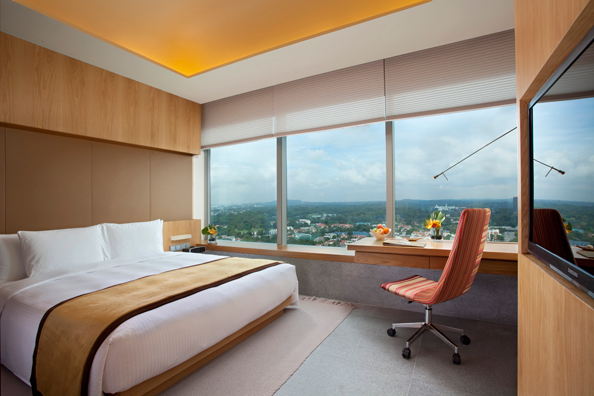 The bathroom had black stone all around and featured a comfortably sized bathtub and dual-showers. The hotel’s toiletries are supplied by Biology – a proudly chemical-free Aussie brand that uses all natural ingredients.

Breakfast is complimentary for all hotel guests and is served at The Marmalade Pantry on the lobby floor. Its breakfast buffet features a large spread of Eastern and Western foods, from eggs-your-way to mee goreng. When breakfast wraps up at 10.30AM, the restaurant offers a “modern bistro” menu which I was told had one of the best mac & cheeses in Singapore.

Though as a club guest, I had access to The Living Room, the hotel’s lounge with an exclusive (covered) pool area on the 22nd floor. I normally don’t prefer having breakfast at hotel lounges, but Oasia Novena surprised me with a wide-spread buffet that stops at 11AM (extra sleep that day was appreciated) and unlimited barista-grade coffee. Evening cocktails were also available at the lounge from 6-8PM and had little dessert testers from The Marmalade Pantry. Breakfast and cocktails with a beautiful view made them all the better.

I had one small hiccup during my stay, and that was when I was working in my room while housekeeping made their rounds. I noticed that they had left rather quickly and found that my bed wasn’t made, actually they didn’t touch the “living” area at all, with bits here and there slightly dusty. I called the manager-on-duty and told her of what happened (because best that it came from me rather than another, more angry guest). I found out that the person on duty was new and he was afraid of asking me for permission to clean the area. When I came back to the room during the evening, I found the entire room spotless and a cute apology towel bunny with a note from housekeeping.

If there was one thing that made my stay one of the best I’ve ever had, it was definitely thanks to the friendly and helpful hotel staff. I must commend Ms. Mazlina, the manager that was on duty most of my stay. She’s definitely a top-tier manager and went out of her way to make sure I had a comfortable stay. The hotel doesn’t stop serving you after checkout, allowing any hotel guest with a late flight to stick around and use the facilities until they need to push off. And despite the small issue I had, I would love to stay here again just to experience that wonderful sleep again (and try out that mac & cheese).

Oasia Hotel Novena – 8 Sinaran Drive. For more info about the hotel, you can visit their website.

The writer stayed as a guest of the hotel. All photos provided by the hotel unless stated otherwise.