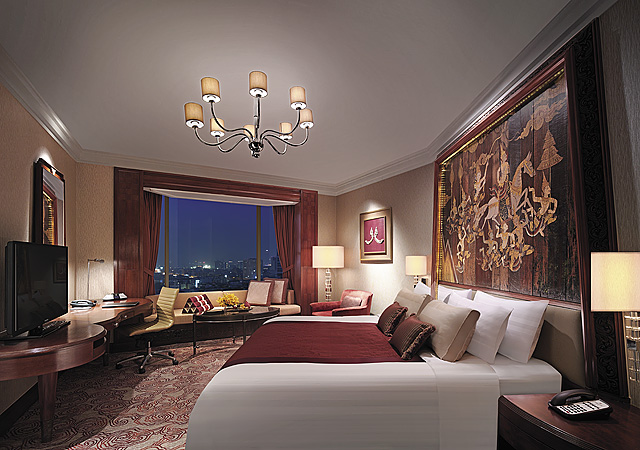 I can’t take my eyes off the bedhead in my Deluxe River View Room. First my phone scans it – vertically and horizontally (because social media demands both orientations now) – and then my eyes. I’m mesmerised. The scene of gold, Elephants and gods painted across dark wooden panels, is the most striking feature of the entry level guest room, dancing over two twin beds which, though small, maintain the level of comfort I’ve come to expect from Shangri-La. 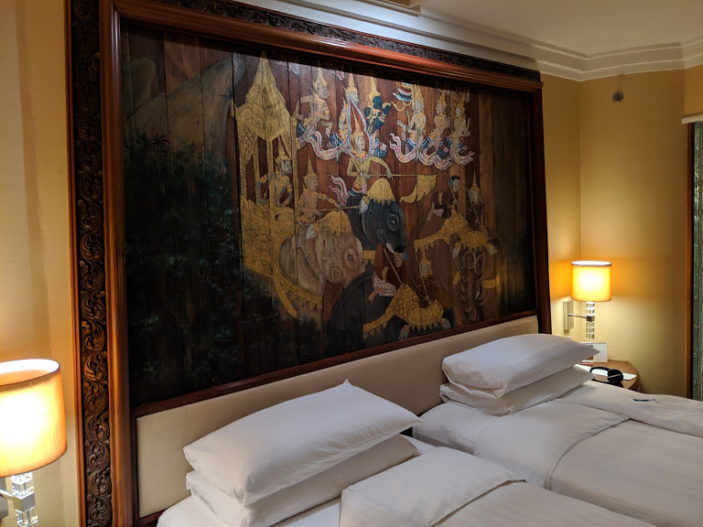 The enormous Shangri-La Hotel, Bangkok encompasses two towers, each with substantial differences in guest experience. It’s easily the largest along the iconic Chao Praya river, with 802 rooms in total split across these two wings, which in turn are connected by an elegant white marble bridge. Where Tokyo’s Shangri-La springs to life with its collection of luxurious chandeliers and glass art, and Vancouver’s stuns with a beautiful display of Brazilian rosewood, Bangkok looks to both contemporary and traditional Thai flourishes, as well as intricate works by homegrown artists.

From the richness of the multi-coloured silk prints that curve behind reception, to the wooden carvings set against the lobby’s creamy walls, the entrance’s visual impact is worthy of the world’s best Shangri-La properties. Though, with a comfortable connection to the brand’s design language, there’s also plenty of space to finesse the property’s own identity. 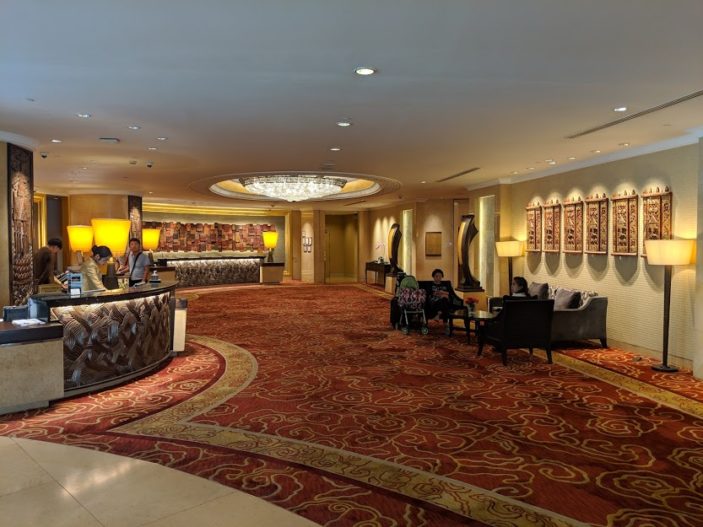 This marble floored lobby opens into larger spaces which encompasses other venues like The Lobby Lounge, a high-tea destination if there ever was one, with large windows attempting to pull in a bit of that riverside lifestyle and, on occasion, a live harpist scoring your feast with dulcet melodies. The Chocolate Boutique is also located nearby, featuring abnormally large and freshly baked pastries alongside truffles and other treats. Inch a bit further and you’re at The Long Bar, obviously geared towards high-end cocktail sessions in the warm interior, centered around a stunning bar top that’s easily over 14 meters in length. Post up here at night to watch the subtle earthy tones take on an eye-popping amber glow and throw back a few classics before heading out to explore Bangkok’s diverse nightlife.

Past the colourful row of orchards you’ll find a high-end Italian steakhouse, volti, but the more accessible dining option is thankfully traditional Thai at the beautiful Salathip. This restaurant, spread through several teak pavilions with a few outdoor seats hugging the river, draws life from regular traditional Thai dancers who skip from table to table, performing while guests eat. It can be a pain if you want privacy, but the dances are a nice touch, along with the fantastic food which is heavily biased towards the Northern areas of Thailand, with spice levels slightly muted for international travellers (although there’s still plenty for spice lovers to order).

With the river as it’s backyard, there’s a sprawling court which is the lifeblood of this particular property’s social life. An outdoor bar clings to one side, opening up into a generous pool area with – amusingly – two lifesavers patrolling during the day. It’s not a deep pool by any means, but the family-oriented crowd justifies the extra staff.

Interestingly enough, the property boasts its very own cruise ship, The Horizon, which sets sail each night at 7:30pm, offering up an international buffet while guests are treated to roaming views of the Chao Praya. I personally didn’t have a chance to test it out – I only ate at Salathip – but regardless of whether or not the food is worth having, presenting that option for Shangri-La’s typically wealthy guests is certainly a strong point.

Shang Palace is the property’s Cantonese restaurant and comes highly suggested by locals, particularly for their dim sum menu.

Finally, guests have Next 2 Café. Negligible in its uninteresting design, it’s a large space and the location of the hotel’s intercontinental breakfast. I found local options to be severely lacking compared to some other hotels around Bangkok, and what was available wasn’t on the level of what I’ve come to expect from previous stays at the aforementioned Tokyo and Vancouver properties. Instead, you’re much better off exploring the immediate area around Shangri-La, since the hotel is located on a quiet backstreet of the Silom district with trendy coffee boutiques, cafes, and highly rated restaurants.

Another benefit with this location is that you’re only a two minute walk away from Saphan Taksin BTS skytrain station, meaning that you have both convenient access to the Downtown shopping area, and to ferries which regularly shift crowds across the river. Take note that the ferry to Bangkok’s ambitious new Icon Siam shopping complex, with its fascinating “Sook Siam” food precinct (designed as an urban version of a floating marketing, with food from all over Thailand) and the city’s very first Apple Store (amongst other luxury flagships), also leaves from here and is completely free.

Shangri-La’s signature CHI, the Spa is part of the hotel’s second wing, Khrung Thep, which also has its own – smaller – private pool and a more private guest experience. The rooms here are almost disturbingly quiet, and while I much preferred the design over at the main Shangri-La wing, a big benefit is that all of them come with their own private balconies, leaning over the action-packed river and offering incredible views.

That’s not to say the views at the Shangri-La wing are any less impressive though. A big wall-to-wall window in my Deluxe River View Room offers just as much entertainment, waking me up to bright and busy scenes of colourful longtail boats ferrying tourists and locals alike. A time-lapse here is a must. 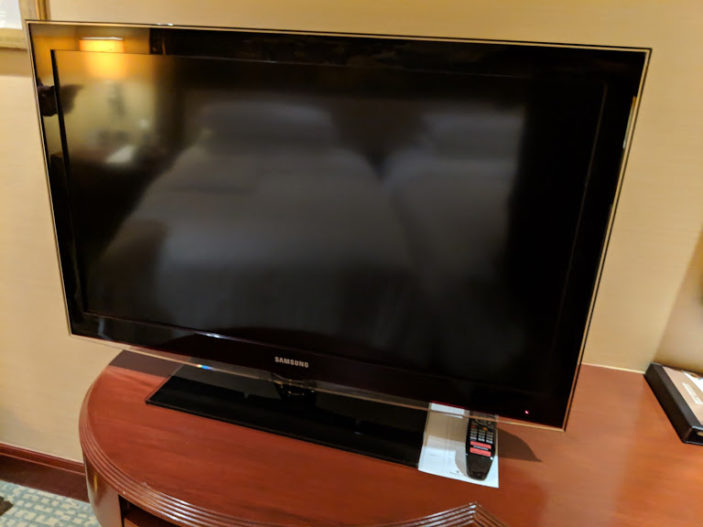 The rest of the room is on the smaller side. Gorgeous curved wooden frames and cabinets help warm the place up, between modern amenities like a generously stocked mini-bar, coffee and tea, and a beautiful large working desk. Though it’s clear the overall offering could use an update. The television, for example, is amongst the smallest I’ve seen in a five-star hotel. 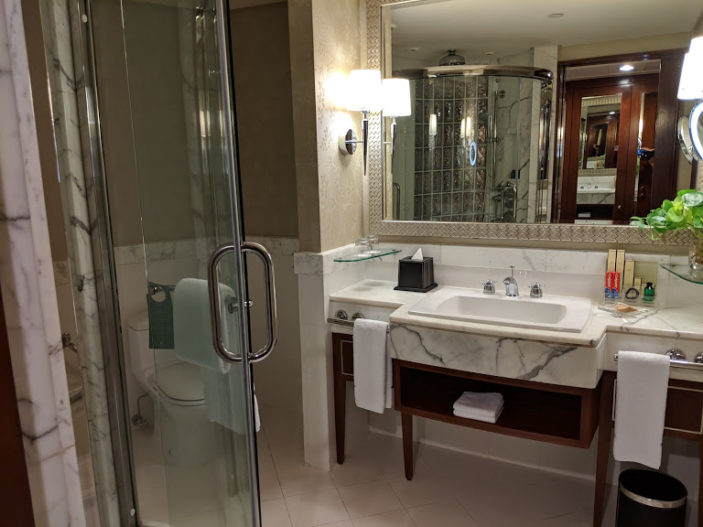 Also quite cramped is the rain shower, cowering into the corner of the pristine bathroom, standing on one side of the entrance while a rather plain looking, and tiny, bathtub sits on the other. 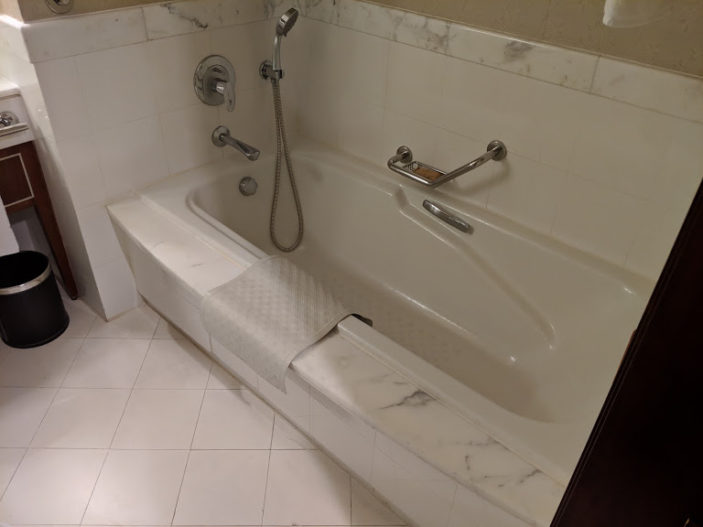 Although guest rooms could use a bit of an update, the most value you’ll be getting out of Shangri-La, Bangkok is from the fantastic location, restaurants and common areas. Fork out a bit more to get access to the Horizon Club lounge if you’d like some additional privacy, and potentially a more enjoyable breakfast looking over the river. And when it comes time to leave, Suvarnabhumi International is only a 35 minute drive – in reasonable traffic. Note that traffic in Bangkok is invariably nightmarish, so double that time to be on the safe side.

The average nightly rate at Shangri-La, Bangkok starts from around $289 AUD.

The writer stayed as a guest of Shangri-La, Bangkok.

Feature image supplied. All other images taken by writer.