One would reasonably expect that Shangri-La Hotel, Vancouver is entirely worthy of the opulent luxury brand and its reliable reputation. It is, after all, Shangri-La’s North American flagship and – so far – only one of two on the continent, with the other being in Toronto. In 2008, it was the first to open; slightly boutique and smaller in scale with just 119 rooms and suites spread across the first 15 floors of a 700-ft high, 62-storey building (the rest of the floors are occupied by private residences and offices).

And it is very much what one would expect from a Shangri-La. The tastefully worked interiors are consistent through the public areas and guest rooms, defined mostly by a liberal use of Brazilian Rosewood panelling which looks stunning as it frames quiet guest hallways, reflecting a true sense of intimacy and class. As far as design goes, this warm, chestnut brown wood is the hotel’s most distinctive element and even reappears in the guest rooms, complemented by a neutral palette and the occasional flourish of eye-catching gold.

It’s clear the hotel was designed accordingly with the guiding principles of Feng Shui, elevated by Shangri-La’s own indulgence in luxury that is neither over or under-stated, but rather comfortable and confident. This is why the elegant crystal chandeliers in both the street-level and downstairs lobby, or the exclusively Italian marble bathrooms, never feel overdone. That is a feat in itself, and maintaining classic luxury without the air of pretentiousness is why this Vancouver property fits so well in the overall Shangri-La story.

Michelin starred chef Jean-Georges Vongerichten lends his name to the hotel’s signature restaurant, Market by Jean-Georges. Like the very presence of a Shangri-La in North America, it’s an East-meets-West concept that is surprisingly affordable but doesn’t sacrifice on quality, making full use of direct access to some of the best produce in all of Canada with a large focus on seasonality and seafood.

Market is also where you’ll want to be for the hotel’s a la carte breakfast; the Brioche French Toast with roasted apples and crispy bacon is outstanding. Though breakfast is worth waking early for, the restaurant fares much better after sunset with its romantic setting, long list of inventive signature cocktails, and memorable dishes. Start a feast with the signature Steelhead Sashimi served on crispy sticky rice with a chipotle emulsion; keep it going with the buttery, true-to-produce Halibut; and end things with the gluttonous Peanut Butter Chocolate Bar and salted caramel ice cream. That’s around a reasonable $59 for a memorable three-course meal, which for Shangri-La is an excellent price point. 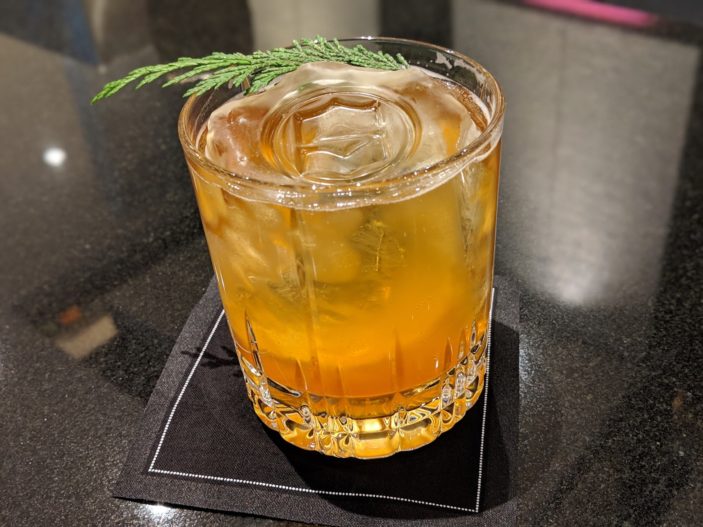 The attached bar has also been offering some very interesting experiments with hydrosols (waters distilled with botanicals – like cucumber water) led by new bar manager Gianluigi Bosco. It has been picking up in popularity with locals, offering a different spin on mocktails with complex and layered flavour profiles. Of course, there are also some classic and signature alcoholic cocktails that speak highly for the bar team, but one would be remiss if they didn’t dig deeper into Bosco’s confident statement (no alcohol means they are much less expensive too).

Healthy drinks seem to be a big focus for the property. There’s even a dedicated Juice Bar attached to the brand’s signature CHI, The Spa concept, which is unsurprisingly one of the best in town. Smart design has led to each treatment room featuring its own hot tub, steam room and change room without feeling oversized. And as any you’d expect, the treatments themselves are super premium, possibly life-changing packages which are all preceded by a footbath and tea service before being delivered by very gentle, highly skilled staff.

Walking through one amenity to get to the other can sometimes feel awkward in hotels, but the position of Shangri-La’s unusually small heated pool is understandable, given the lack of space to actually work with. It’s pretty much an extension of the spa, located outside on a balcony looking to the distant North Shore Mountains.

Other amenities include a full size fitness centre that doesn’t skimp on premium equipment, and surprisingly the hotel’s very own theatrette, which I’m told is quite popular during the Vancouver International Film Festival in September/October seeing as it’s sometimes used for screenings. Notably, the lower lobby also has its own airport check-in machine in partnership with the major airlines who regularly fly out of Vancouver – although it wasn’t working when I tried it. 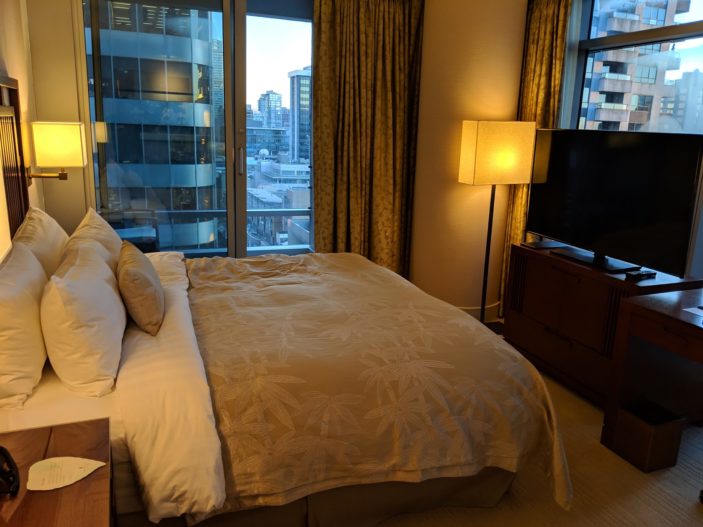 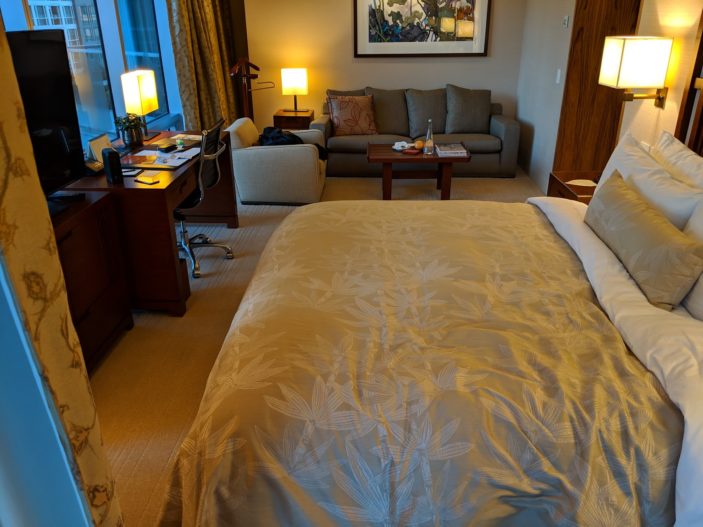 With seven categories (3 for rooms, 4 for suites), there’s a nice variety in taste, size and budget, given how small the property is. There’s also plenty of variety within each category as well. For example, my Executive Balcony King Room featured a closed private balcony, while others throughout the hotel feature open-air balconies. Differences aside, the room was still spectacular: around 56 square metres of luxury living space with modern furnishes and an exceptionally comfortable, “sink into it and never want to leave” bed dressed in golden linens. The bathroom was my favourite feature. Entirely covered in creamy Italian marble with a separate rain shower and tub, standing together opposite a large double vanity. Plenty of natural light comes tumbling in from the large windows, but the neighbouring office buildings makes it hard to justify keeping the automatic blinds up open during a soak. 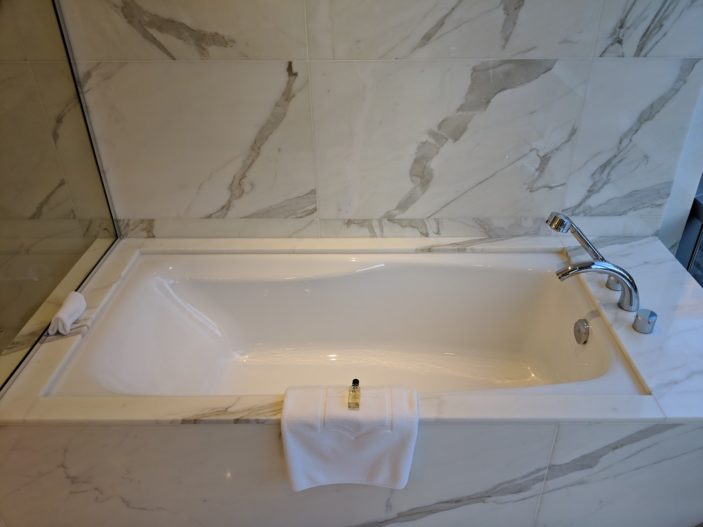 Location wise, the hotel is perfect. It isn’t as quite dead-centre as the historic Fairmont Vancouver, but with that property being only a block away, you’re close enough. The short walk to the main shopping district of Robson Street certainly helps in justifying Shangri-La’s price tag, but guests also have direct access to the ritzy Alberni Street, which has fast become Vancouver’s home of luxury brands and flagships. In fact, the largest Rolex boutique in North America is part of the same building as the hotel.

Aside from shopping, Vancouver’s major contemporary art galleries are nearby, and it’s only a short 10-15 minute walk down to Stanley Park, or the waterfront where several of Vancouver’s main tourist draws are located. You’ll still need to catch a cab to some of the city’s quintessential cultural treasures, like the exceptional Museum of Anthropology, or local favourite eats like The Red Wagon on East Hastings, but that’s to expected from such an enormous and dynamic city as Vancouver.

The writer stayed as a guest of Shangri-La, Vancouver