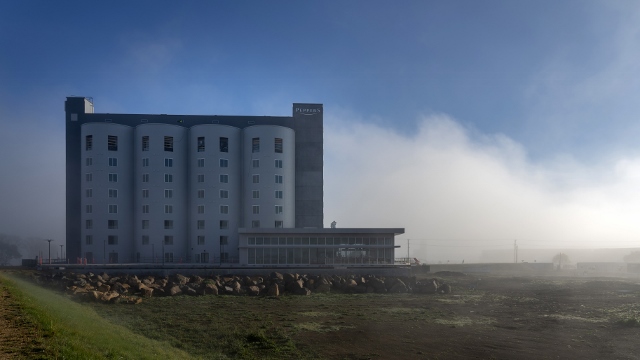 Originally erected in 1960, the stately grain silos perched on Launceston’s King’s Wharf, where the North Esk meets the Tamar, stood abandoned and disused for fifty years before an ambitious project led by Errol Stewart sought to transform the four empty barrels into a high-end contemporary hotel. That project began two years ago, resulting in what is now Peppers Silo Hotel, owned by Stewart who has surely given the reputable Peppers brand of it’s more exciting and imaginative properties in years.

Opening doors just a few months ago, Silo feels like a vital move for the historic Tasmanian city, which has always been overshadowed by Hobart but has plenty of big developments on the horizon. Though the hotel is located on the less lively side of the North Esk River, the future holds enormous change, including a state-of-the-art campus for The University of Tasmania which should lead to further developments bringing about bars, restaurants, cafes and retail outlets. But until then, the scene at Peppers Silo – which consists of 108 guest rooms, a restaurant and two bars, a large function space, a day spa, hairdressing salon, and a gym – will do just fine.

The hotel’s fantastic onsite restaurant and bar, Grain of the Silos, is helmed by chef Peter Twitchett, and overseen by Food Director and TV personality Massimo Mele. Through a strong relationship with local producers, the kitchen creates gorgeous homages to Tasmanian produce used in a variety of meats, seafood and pasta. And wherever there is good food in Tasmania (hint: pretty much everywhere), even better wine isn’t far behind. Wine Educator Curly Haslam-Coates has a list of award-winning locals to pair up with the wholesome dining, as well as a few international drops that complement the clean, farm-fresh flavours of dishes like the refreshing salmon wrapped in a wasabi leaf with spring onion and ginger, and the superb fried gnocchi served swimming in slow cooked wagyu beef and pork belly ragu with onions, parmesan and fried sage.

Amenities are well-placed and bring a lot to the hotel. The fully equipped gym is accessible 24-7 while guests should find plenty of options at the thoughtful day spa and the reasonably priced hairdressing salon. Child minding services will be appreciated by visiting families when the university campus opens, and the circular standing cocktail bar is an impressive, generously stocked haunt that is one of the few common areas not basking in sunlight during the day. The end-to-end lobby has also been beautifully designed to integrate with nearby reception, featuring a long carpeted lounge area with floor-to-ceiling glass windows all around. It can be segmented off into several spaces, but when opened up it’s an inviting and sociable area which should serve as a nice meeting spot for both locals and hotel guests, any of whom just might run into Archie, the hotel’s very own resident Labrador who was adopted by the hotel after failing to pass guide dog exams and spends his time circling the hotel, being taken on walks by staff and guests, and even helping deliver newspapers to guest rooms in the morning.

The hotel sits at 10 stories tall, which isn’t exactly sky high but is sizable enough to take advantage of those pristine water views, which stretch all the way to the surrounding Cataract Gorge and even Mount Barrow: a visual push towards the city’s best hiking trails. Those kind of picturesque views are offered from both sides of the hotel, as rooms are split into 52 built inside the silos and 56 built around the central feature, in a large north-facing tower. The silo rooms are obviously carved with the barrels in mind and possess more character than their brighter counterparts, moodier in look and feel with plenty of necessary circular edges and chrome lamps looking spectacular against the rustic slabs of concrete which have been softened by the modern design. The cave-like atmosphere is complemented by mood lighting bouncing of those textured walls and green-tinged furniture. 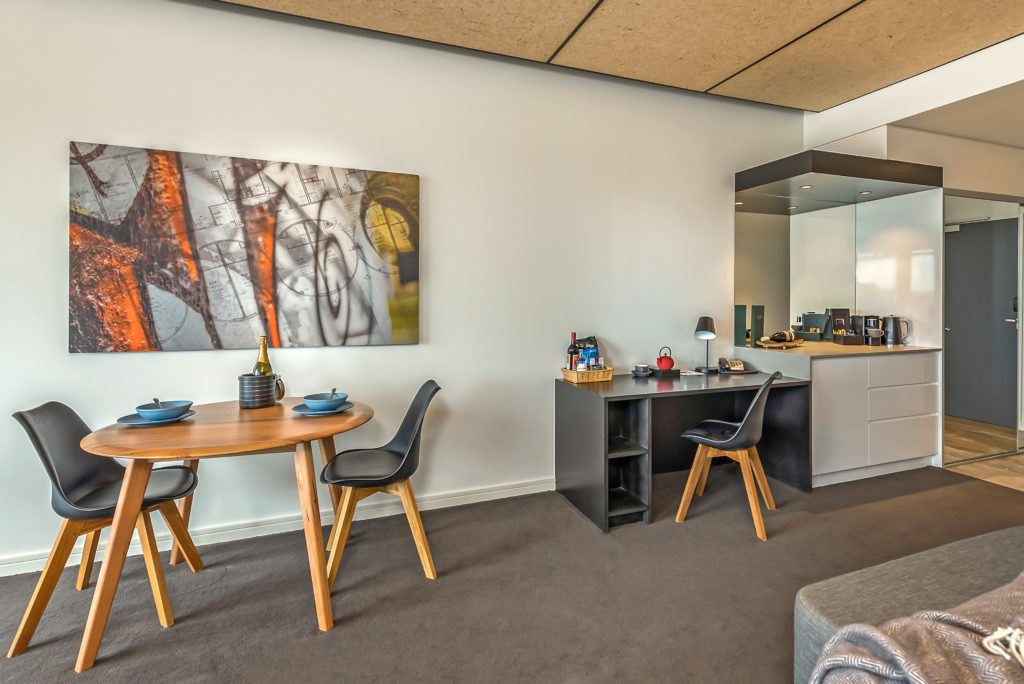 On the flip side, the non-silo rooms are more traditional, though charming and large with contemporary furnishings, an exceptionally comfortable king size (with a gorgeous multi-coloured throw) and comfortable bathroom with walk-in rain shower. The ironbark desks highlight the consistent use of recycled material throughout the hotel, many of which has been repurposed from the wool sheds that once stood nearby the property.

The $25 million hotel should be upping its value along with the city’s biggest developments, which includes a neighbouring adventure playground, that aforementioned university campus, and a footbridge making the hotel more accessible from the CBD. Although that value already reaches quite high, especially given the potential side-trip guests can take as they venture far into the Tamar Valley and discover all the vineyards dotted across the picturesque region. Lovers of oddity art and live music should also keep this one in mind, since Hobart’s Mona Foma has now been confirmed to be held in Launceston at least for the next three years.

Those heading to Launceston soon should note the hotel is running an opening bed & breakfast rate from AUD $199 per night, which includes complimentary fast Wi-Fi and is valid for sale and travel until midnight (AEST) on 25th December 2018.

The writer stayed as a guest of Peppers Silo Hotel.