In a relatively quiet area of East Perth is where you’ll find Mantra on Hay, not as central as some of Mantra’s – well, now Accor’s – other properties in the “most isolated city in the world”, but close enough that you don’t feel like you’re missing any of Perth’s increasingly energetic social scene. It’s a more affordable alternative to the city’s ritzier stays, with large apartment-style living being the biggest draw, whether that be for longer term visits or short-burst staycations.

Unremarkable but comfortable is how best to describe the hotel lobby, neither a hub of activity nor a bastion of modern design but perfectly functional as a communal space, the best feature being a small courtyard that, although empty throughout my stay, is appreciated. The lobby also opens up into Cornerstone Bar & Kitchen which is open for breakfast, lunch and dinner daily and seems to be quite popular after sundown. Breakfast is a small and standard buffet, offering the usual hotel staples.

The building is large, with 152 rooms as well as one and two bedroom apartments, all shooting off of wide hallways. My two bedroom apartment is on a floor overwhelmed by the various aromas of other guests making use of their fully equipped kitchens. I can smell various curries and soups at any reasonable hour, darting back and forth between my apartment and the CBD, which is easily accessed with a nearby red cat stop where guests can watch free buses to the strips of restaurants, cafes, bars and shops. 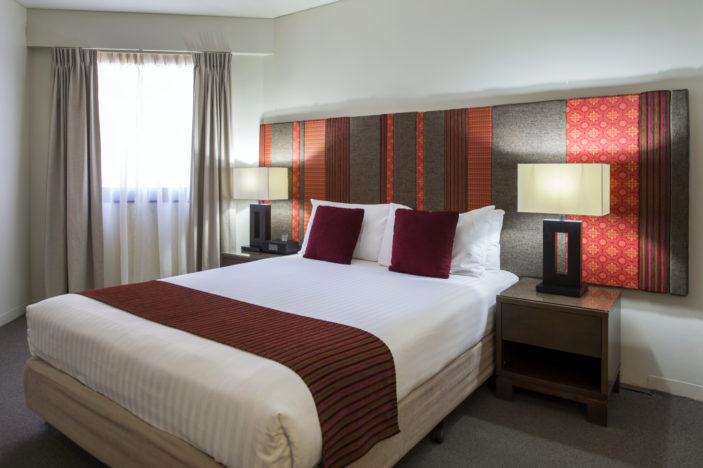 It’s clear that living space is the biggest and most generous offer from Mantra here. The apartment is well proportioned, with a defined lounge room with couches and TV next to a balcony, a big glass table with enough space for a large family, two bedrooms, one bathroom, a full kitchen, and a separate washer and dryer. Furniture opts for the plain and practical: comfortable, but not excessively so.

Elsewhere, a heated (indoor) rooftop swimming pool and gym equipment help up the value of Mantra on Hay. Strangely though, the minimal gym equipment aren’t in their own dedicated space, spread out on one end of the pool. Still, while its a small offering considering similar amenities in other hotels of this range, it works quite well when there are only a handful of guests using the space. 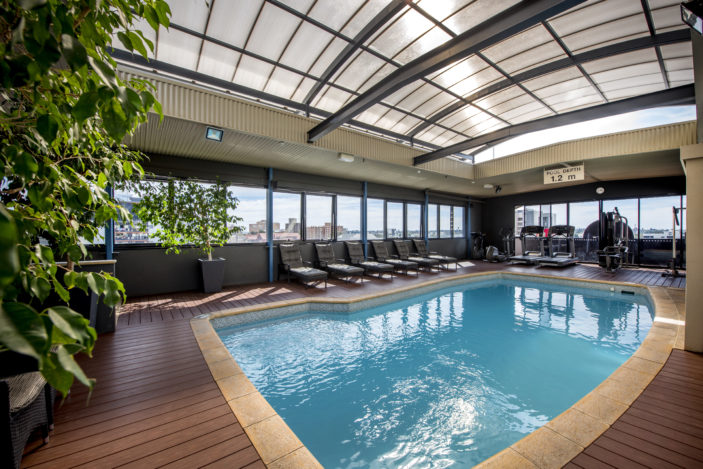 The hotel’s East Perth location provides the most value here. There’s a perfect middle ground between the centre’s hub of activity and the more far-flung destinations like WACA Cricket Ground, Gloucester Park, Swan River and its surrounding precincts, and the lush Queens Gardens. For business travellers who won’t have much time in Perth, this is invaluable, as it is for those who want to explore more of Perth outside of the quintessential sights like the sprawling Kings Park and nearby The Perth Mint.

Average nightly rates at Mantra on Hay start from $159..

The writer was a guest of Mantra on Hay.