The “downtown” area of Las Vegas, which is situated around the iconic Fremont Street (also known as the “classic” Las Vegas strip featuring casino-hotels like the Golden Nugget) has been undergoing quite an extensive amount of changes over the past decade. The run of old hotels and casinos are still there, some redeveloped – with a massive LED screen sitting above the strip. But it’s on the periphery where things get interesting; a number of newer or redeveloped hotels and dining options have popped up, and there’s also been the decade long arts and entertainment development of what’s called “Fremont Street East”, which now expands six blocks and is filled with attractions unique to the city.

One of these hotels is the Downtown Grand Hotel and Casino, which opened across two towers and no less than 629 hotel rooms in 2013 in place of the Lady Luck Hotel and Casino, which originally opened in the 60s. In addition to the more than six hundred rooms, the Downtown Grand has 9 bars and restaurant – including the 35k square foot rooftop pool, bar and dining destination Citrus, which adorns the headline of this article.

Spending one of my afternoons almost exclusively in the vicinity of Citrus, I found there was less of a party vibe than a lot of similar hotel pool areas in Las Vegas, which is welcome – though I’m sure they do have plenty of parties up there. It’s family friendly, there’s decent music playing and the area is incredibly spacious (though it’s a smaller pool than you might expect). You can order food and drinks to tables around the area, or to the pool, and the menu is both extensive and affordable – with some fantastic cocktails included on the menu, and a happy hour daily from 5pm to 7pm. And should you not wish to jump in the pool, there’s a lot of misting machines thrown around the area to keep you cool.

I was staying in the “Grand Tower”, which required you to walk through the Grand’s small casino (which has all the usual trimmings), past a tiny fitness room, and over a bridge between the two towers.

My deluxe room – the hotel’s standard, which comes with a King Bed or two Queens – was a clean, spacious and comfortable room, complete with a decent sized bathroom and an amazing view of downtown and the desert. The bed was comfortable, though there was only one kind of pillow, which feels worth mentioning given the fact most hotels now have a couple of different options sitting there waiting for you. I’m sure if you called and asked for an alternative, they may have one, as we had to ask for an additional blanket due to the existing set up being quite thin, and no additional blankets waiting in the cupboard. But they brought them up within minutes. 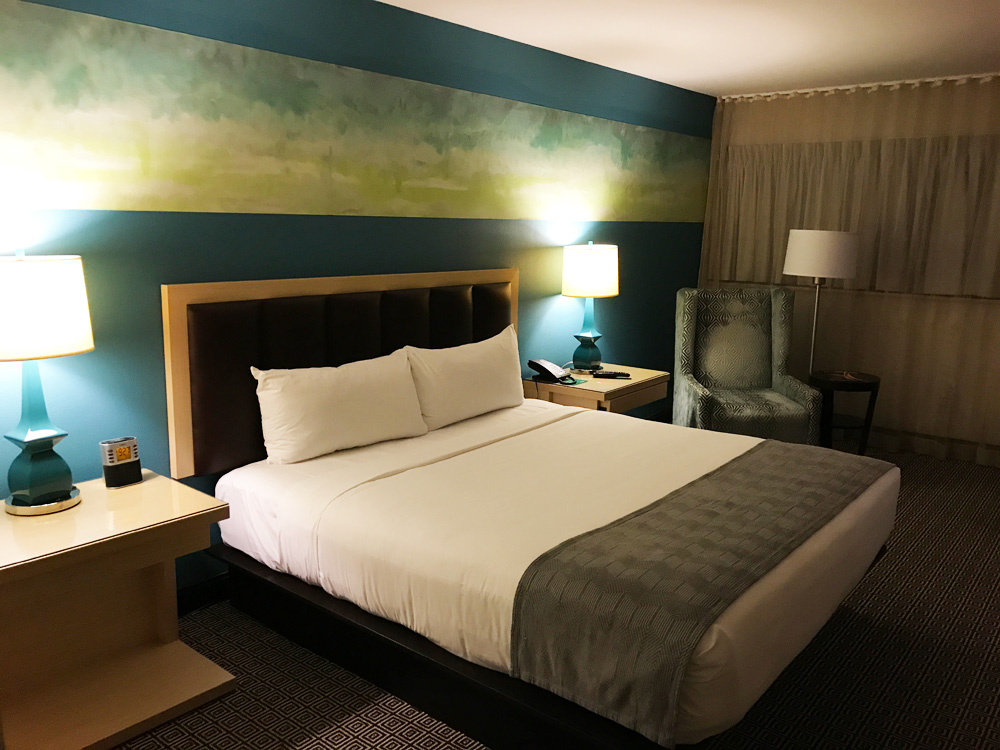 There were a couple of complimentary bottles of water waiting for your arrival, the TV was large and filled with the usual amount of US channels (which is more than anyone needs), 5mps wireless internet was free with your room and there was notably great soundproofing. The bathroom has some nice toiletries from Jonathan Adler (Grapefruit being the flavour of choice) and Malin+Gotez, though the facilities themselves aren’t that “fancy”. I would even go so far as to say the bathroom felt a bit “old” – especially the shower. It’s possible that they retained some aspects of the old hotel during the upgrade, such as shower heads – though with plenty of plugs and work space throughout the room, they don’t deny you of the modern trimmings. The room has everything you could possibly need both in terms of comfort and practicality… and for anything else, just ask!

I’ve got to say, too, that I really do think they’ve transformed the Fremont precinct into a cool area. The classic yet delightfully tacky “Fremont Street Experience” has its charm, and the more “trendy” Fremont Street East, filled with the art and grandeur of the neon project pictured earlier, has revitalised the area with a number of smaller dining and bar options, shopping and attractions. Look out for the Fire Breathing Praying Mantis at the Downtown Container Park for starters. I’m told the developments are ongoing, and it’s a sign of things to come in an area which embraces the old as it makes itself a suitable alternative to the main strip – especially for families and locals. 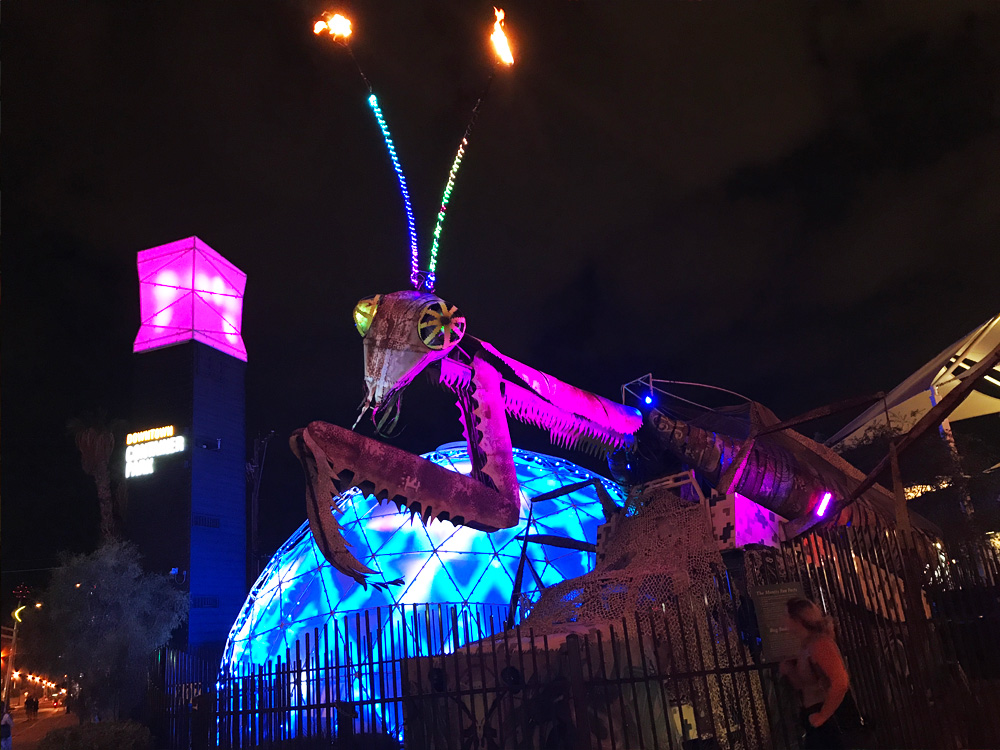 Speaking of families, the “Bunk Bed Suite” option is one I haven’t seen offered by a Las Vegas Hotel before; this could suit both families and small groups who are looking to save a bit of dosh on their Vegas visit. Take some time to look through the stack of coupons they give you with your room keys, too, which will provide discounted experiences around the area.

But should the main strip and its many shows and attractions still be a wished destination (and let’s face it, no trip to Vegas would be complete without it), it’s a short 10 minutes drive away, with plenty of taxis and Ubers available at your disposal, and you won’t pay more than $10-15 for it each way. There’s also The Deuce public bus option, though this will take about half an hour. So even those thinking of spending most of their time on the main Las Vegas Strip – or maybe you’re looking to use Vegas as a hub while you make trips out to places like the Hoover Dam – should consider the Downtown Grand thanks to the area’s lower costs, yet still vibrant lifestyle.

Part of the lifestyle that this hotel in particular offers is its dining. Freedom Beat is the 24 hour on site diner which offers great food, with Breakfast, Lunch and Dinner served 24 hours a day. It also has an incredible affordable room service option, with a selected version of the Freedom Beat menu that arrives more like Uber Eats than traditional room service (we’re talking delicious $13 burgers in a paper bag, rather than on a plate).

There are no ridiculous fees that Las Vegas is known for, just a small additional $2 charge per item (the standard eggs as you like it with bacon, potatoes and a house made biscuit will set you back $10 in the diner or $12 in room), and no surprising room service charges. Honestly with a deal like that, you never need to leave the room. Though the two daily happy hours (2-5pm & 2-5am) and a stage set up for live music may inspire you to venture downstairs. 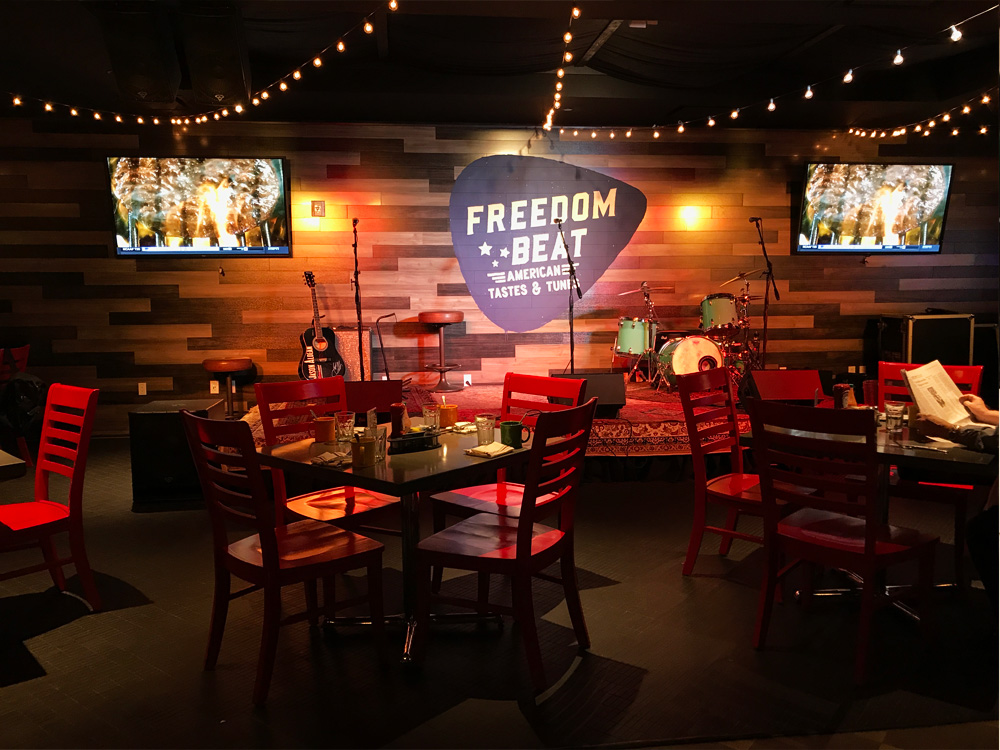 But should you venture out, you might consider Pizza Rock, which serves massive pizza slices from $4 a slice, or the stunning meal provided by the Triple George Grill Steak and Seafood restaurant. With a fantastic drinks menu comprised of what may be the best Whisk(e)y menu you’ll find in Vegas, and warm, crusty sourdough bread with butter served as you soon as you sat down – this is every part the high end dining experience you could ask for, but served at a highly reasonable price (something you’ll see is a bit of a trend both for this hotel, and for the Fremont Street area in general). 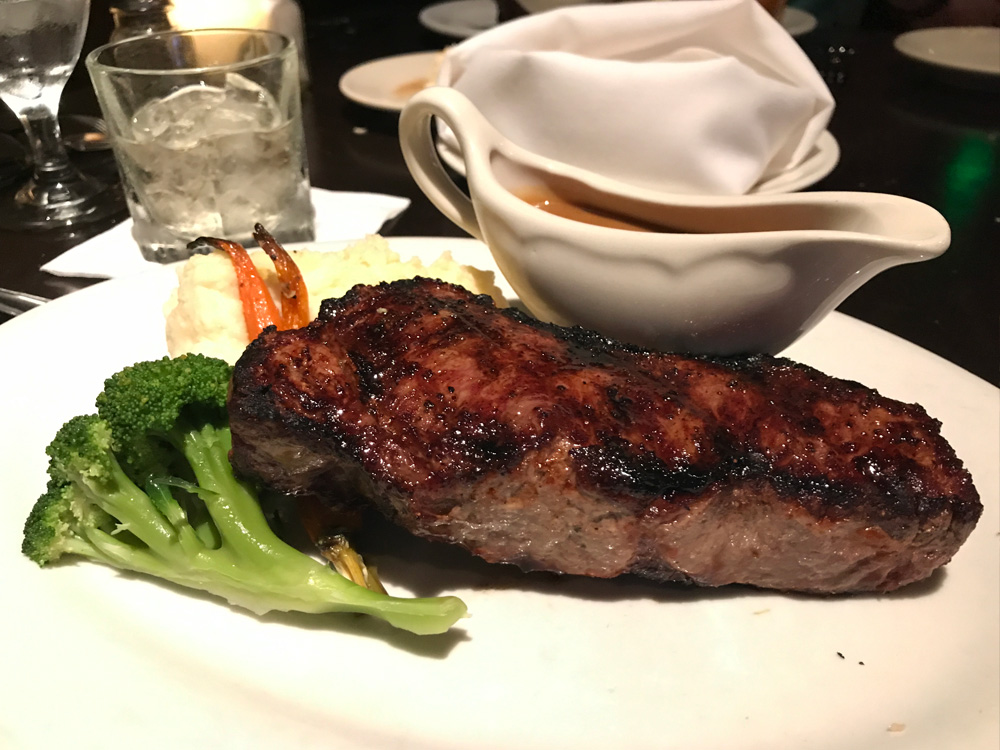 A perfect 14oz New York Strip, for instance, will set you back about $36.95, while a plate of buttermilk sage fried chicken is $16.95, and a 3/4 lb burger with all the trimmings, $14.95. The Burrata Salad ($10.95), with hierloom tomatoes, balsamic, pesto and watermelon is a must too. You’ll also find an extensive selection of seafood dishes and the source many of their ingredients from the nearby Downtown 3rd Farmers Market.

All in all, while the Downtown Grand Hotel & Casino may not have the size and stature of some of its counterparts on the main Las Vegas Strip, it provides everything you could ask for and more from any hotel – let alone one in Las Vegas. Comfortable rooms, excellent dining options and the world of Fremont Street and the greater Las Vegas area at your doorstep, definitely don’t look past this hidden gem on your next trip to the City of Lights.

To book a night at the Downtown Grand (206 N 3rd St, Las Vegas, NV 89101, USA), an Ascend Collection Hotel, head to their official website. Airlines such as Virgin Australia, Qantas, Delta, Hawaiian Airlines and United Airlines fly direct from the East Coast of Australia to the USA, from where you can connect to a flight to Las Vegas.

The writer stayed as a guest of the hotel. All information was correct when this article was originally published in November 2017.  Visit their website for up-to-date pricing. Photos by the author, except for the headline image provided by the hotel.