Review: Ace Hotel New Orleans captures the very best of the brand for The Big Easy

Those who have travelled around the USA likely have come across the Ace Hotel. And if you haven’t stayed at one of their 8 American locations, or even passed it by, you’ve likely heard about it – from the now iconic rooftop bar and pool in LA’s revitalised Downtown District, to the celeb hangouts and spectacular view of the Empire State Building in New York’s Midtown.

So ingrained is the brand within a certain element of pop culture, Bon Iver and Noname have referenced it in their songs “33 “GOD”” and “Ace”, respectively, and there’s a Portlandia episode where they parody the more “hipster” elements of the brand at the “Deuce Hotel”. With guitars sitting in select rooms, and a casual flair that embraces the historical qualities of hotel culture, its status among the music and artistic (and, yes, hipster) communities is understandable – that’s the very audience they’ve been targetting.

But more interesting, perhaps, is travelling to other boutique hotels in North America. Though they weren’t the first hotel by any means to revitalise old spaces, they certainly brought a new level of popularity and class to the style, making it something completely their own. And it’s an approach that countless others in the market have tried to emulate, to varying success. The Ace brand embraces the very best of hotel culture – vibrant lobbies, beautiful, art deco building designs, nightlife and a room that provides the comforts and style of home; in this case if this was your home 60+ years ago. 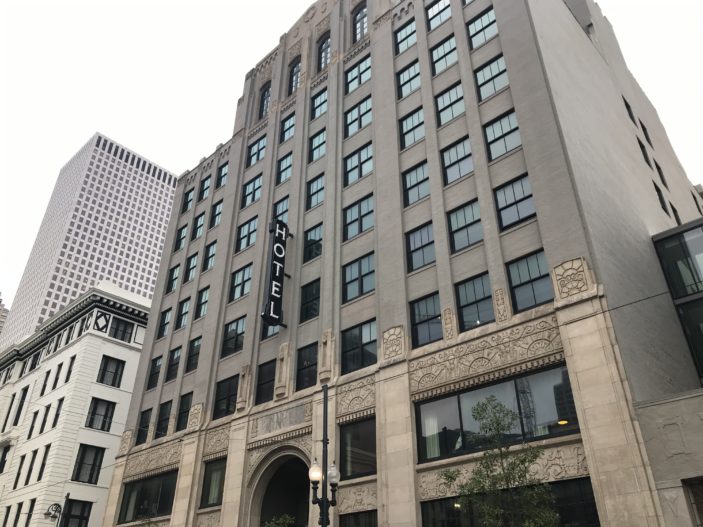 At the time of its launch, the New Orleans location was the 8th for the Ace, and the 7th in North America, opening back in 2016. The chain – which expands to Asia for the first time this year with a location in Kyoto, Japan, its 10th overall – celebrated its 20th anniversary last year.

The detail paid to the building itself is notable; though almost 100 years old, the 1928 Art Deco, nine-story former Barnett’s Furniture building has been given new life, with every new addition to the building – such as the new windows – designed to reflect the character and style of its original design.

One addition that was unlikely featured in 1928, however, is their rooftop bar and pool, which is not dissimilar to their LA location – basically a massive Jacuzzi with plenty of places to sit and relax, with fire pits in the winter time. The bar, ALTO, is open from 10am to 10pm. 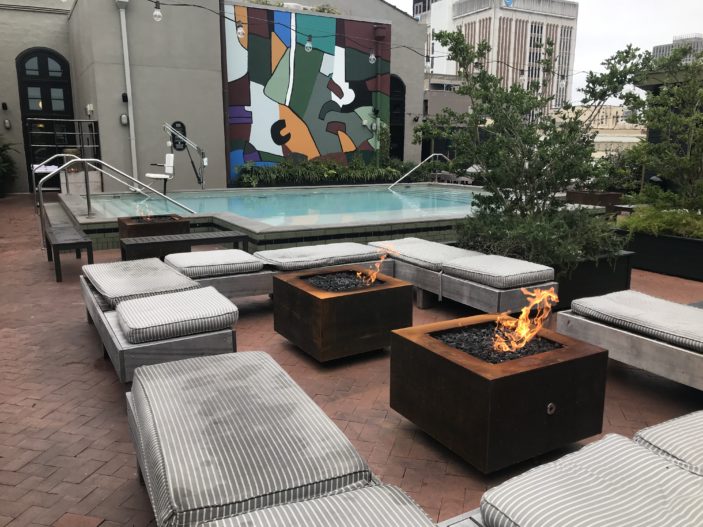 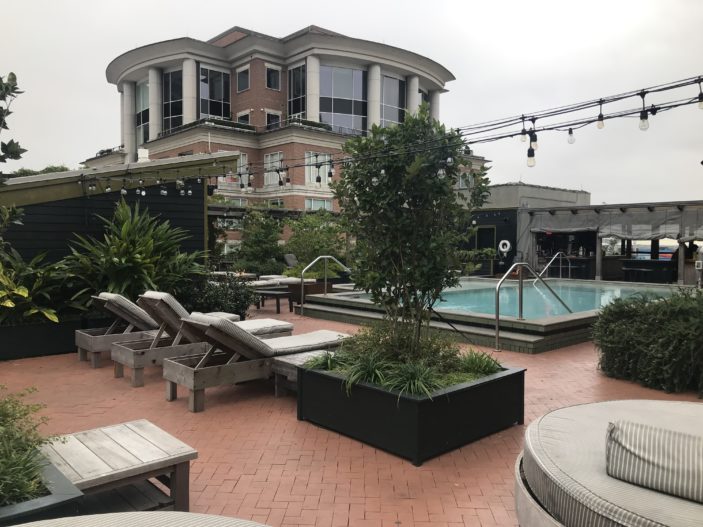 You enter the hotel to a check in area in front of you, with a restaurant on the left, and a lobby bar on your right. The restaurant, Josephine Estelle, is Southern-meets-Italian cuisine, helmed by James Beard Award-nominated chefs Andy Ticer and Michael Hudman. They serve breakfast, lunch and dinner until 10pm or 11pm (depending on the night), with and option for pre-ordered breakfast in bed by way of an order left hanging on your door the night before, between 7am and 11am. 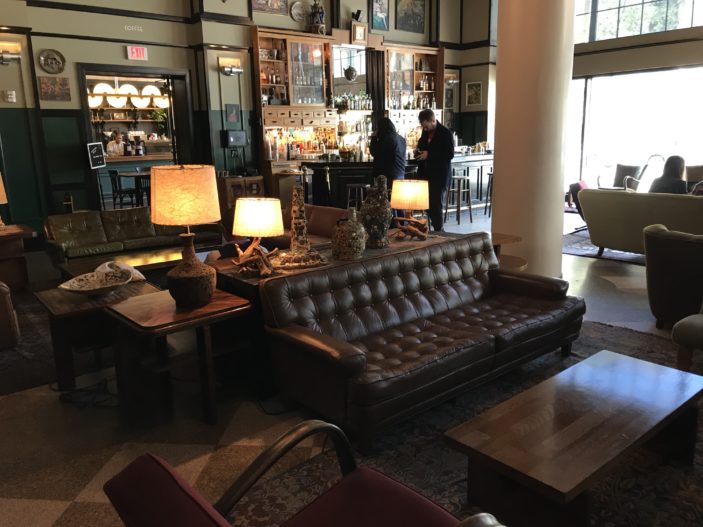 On your right is the French Deco-inspired Lobby Bar, which serves up a Happy Hour from 4pm to 7pm, with snacks and cocktails served seven days a week. This included some free popcorn during a Monday afternoon Happy Hour while I was staying at the hotel, and no matter what time of the day or night I walked through it, the vibes were fantastic – and reminded me of their New York location.

In between the bar and the elevators to your room, you’ll also find an intimate live music venue disguised as a Speakeasy, Three Keys.

Serving up free live music on the regular, the hotel describes it as “a venue dedicated to the ineffable magic of this city — a place where musicians and performers, piano princes and drag queens, can feel the same freedom of spirit and collaboration they do in their living rooms and studios. Three Keys has a tiny stage and a floor hand-painted with optical illusions. The nights are long and improvisational, and the audience is often part of the act. It’s a place to pay tribute.”

The radio was playing the Blues when I arrived in my room; it had been so freshly cleaned you could still smell it (and that’s not a bad thing). From a design point of view, the room reminded me a lot of their New York location – minus the Empire State Building view of course.

A key design element of the Ace Hotel brand, is that they endeavour to makes you feel like you’ve travelled back in time, with older style furnishings and colours; greens and blacks and browns run through the room, including the full size SMEG fridge, which is crammed full of treats available at a nominal fee, and there’s an events calendar hanging on it to encourage you to visit their on site entertainment and dining options.

There’s a full cocktail bar with shot glasses and shakers. There’s a calendar hanging on the wall, and you’ll also find a “survival guide” on the small table, and handy things like envelopes and pieces of A4 paper you can use, that have the Ace Hotel branding via a red stamped address. It’s those little bits of branding that are strong and consistent throughout the chain.. Little touches that make it feel like more than just a hotel room.

The bed is massive and very comfortable, with long pillows that have a quiet luxury to them. You won’t be disappointed by the temperature of the room; the air conditioning keeps the room very much in the 21st century, and it easy to manage, while back in the 20th century, the wooden curtains against the windows will ensure your room stays dark when you need it to. The new windows will keep most of the bustling sounds of New Orleans out, too. 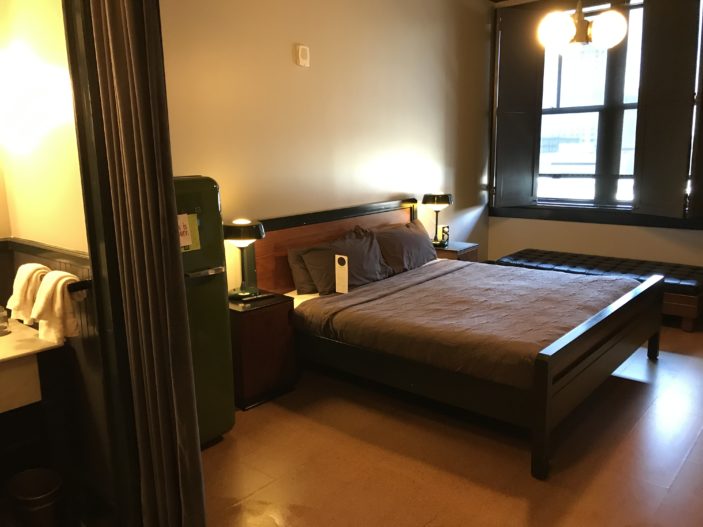 You won’t find any USB chargers next to your bed, but otherwise the room has all the creature comforts you expect from a modern hotel room. The lights on your side table have AC plugs in them, and some of the lights in the room have dimmers. There’s a decent sized flat screen LG TV against the wall, that has Chromecast built into it, and about 46 channels (with no Fox News I might add, a pleasant change of pace in South of the US). The wi-fi worked when I entered as a guest visitor rather than a hotel guest, and it was fast and easy.

Toiletries from RUDY’s are on the wall of the shower, which you dispense like you would soap (rather than wasting plastic through mini-toiletries), and you’ll find a Beekman 1802 goat milk face and body bar and a Malin + Goetz body moisturiser by the sink, which is separated from the main room by a large curtain. Oh and there’s a dryer hanging in a bag on the wall. 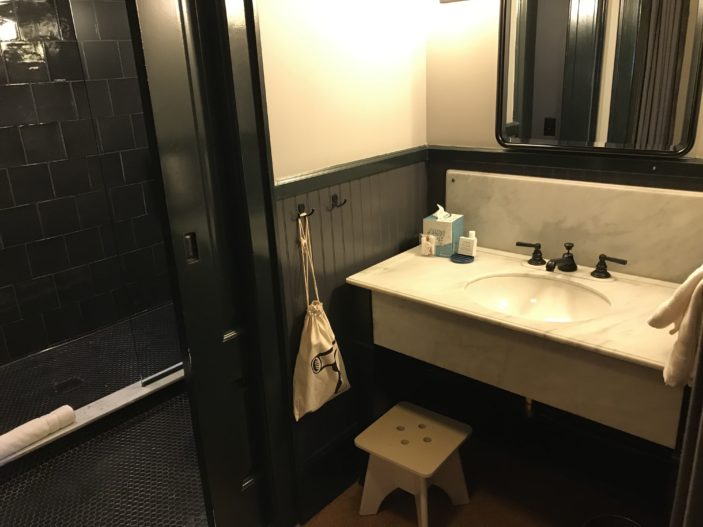 The shower and toilet have their own sliding wooden door. The shower (I was on level 6) doesn’t have the best pressure or heat, but it’s a massive walk in, and the design of the room is fantastic. The towels are 100% organic cotton from Turkey and very comfortable. You’ll also find a thin, very comfortable and dare I say fashionable pair of robes from Wings and Horns in the cupboard.

And while the room, for the most part, fit to the Ace Hotel identity, rather than that of New Orleans itself, one particular addition to the room very much paid tribute to the town it sits – and that’s by way of a unique “Do Not Disturb” hanger, that you sit on a hook outside your door. Rather than the usual card… well, I’ll let you see for yourself. 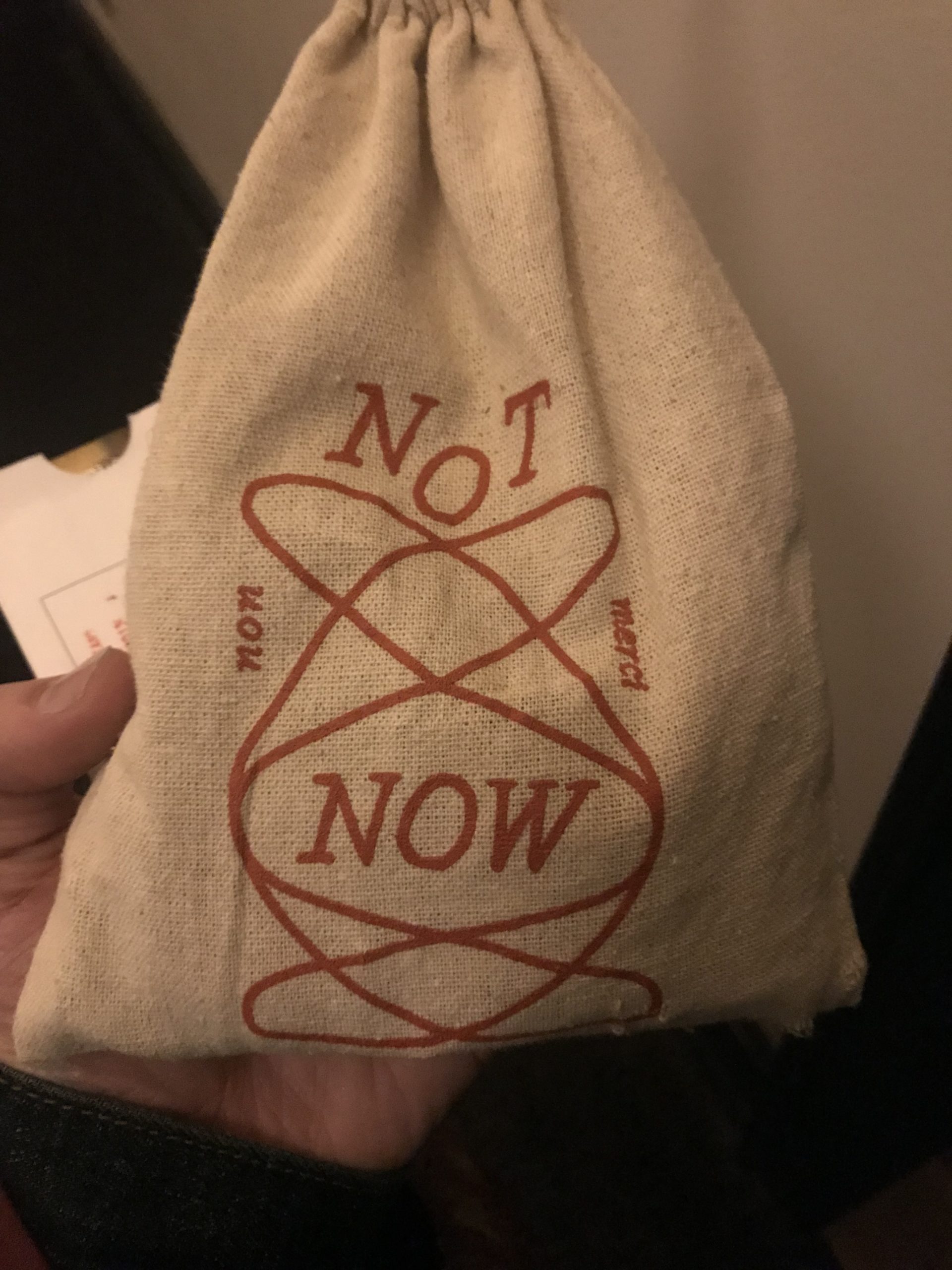 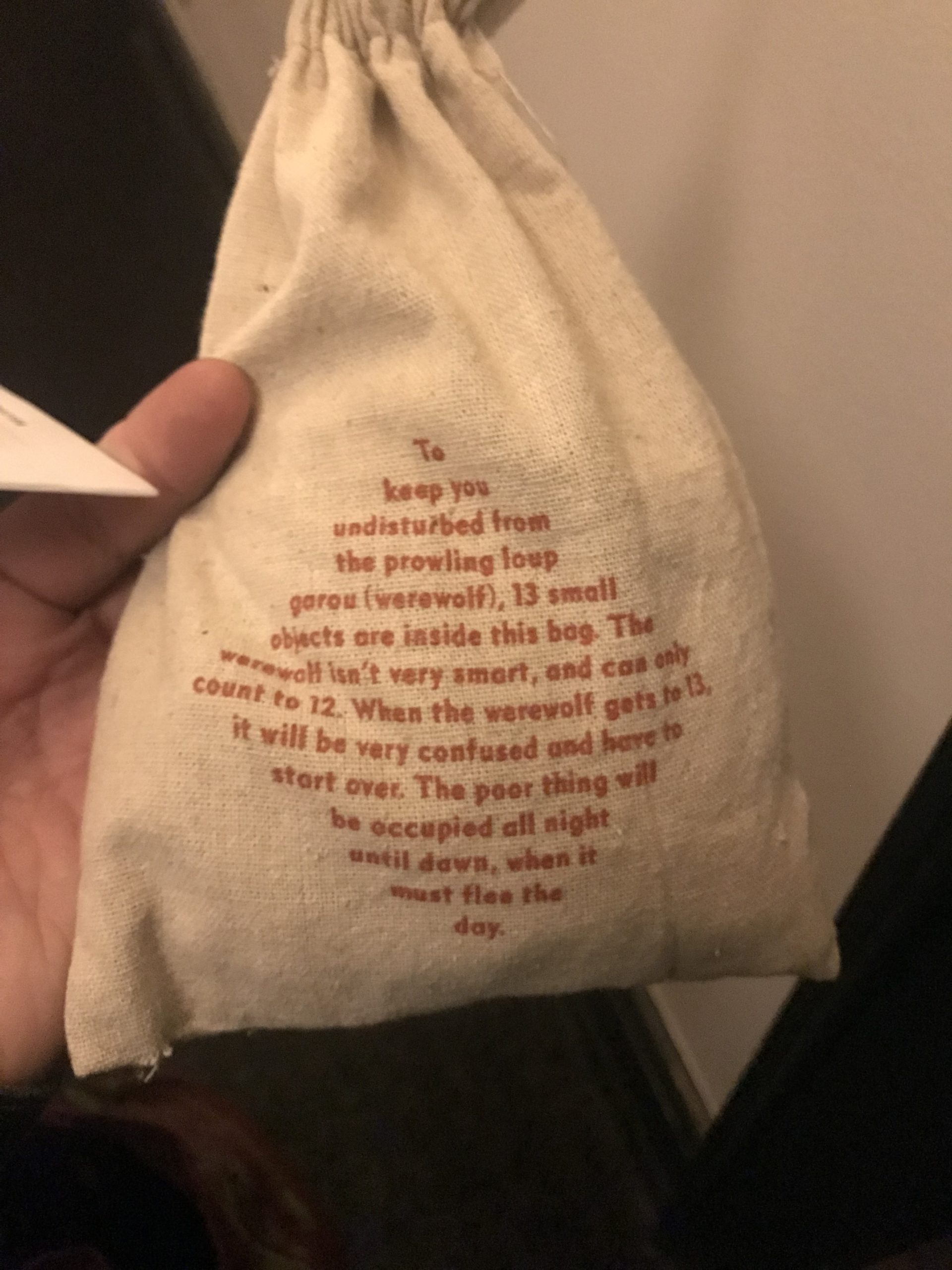 “To keep you undisturbed from the prowling loup garou (werewolf, in Old French), 13 small objects are inside this bag. The werewolf isn’t very smart, and can only count to 12. When the werewolf gets to 13, it will be very confused and have to start over. The poor thing will be occupied all night until dawn, when it must flee the day.”

I don’t know how I feel about calling the cleaning staff werewolves, but I digress…

Ace Hotel New Orleans sits a bit less than ten minutes walk from the French Quarter, on the other side of Canal Street. Known as the Warehouse District, You’re right by Lafayette Square and the Mardi Gras parade route, and it’s an area that has been revitalised in recent years – the Ace Hotel certainly being a part of that change. The building next door also re-opened as part of the project, which includes a Stumptown Coffee Roasters, and you’ll also find a Congregation Coffee House a few minutes down the road.

For those who need a healthy meal (not necessarily the easiest thing to find in NOLA), a True Food Kitchen is also around the corner, and you’ll find a CVS Pharmacy a block away, as well as the Rouses Market, which offers up a lot of organic produce and would be comparable to a Whole Foods – with a lot more soul.

Beyond their standout on site dining, you can also try Gianna, an amazing Italian restaurant 5 mins walk away (located at 700 Magazine St). It’s big, bright and luxurious – quite affordable too and they make their pasta in house, starting from just $8. 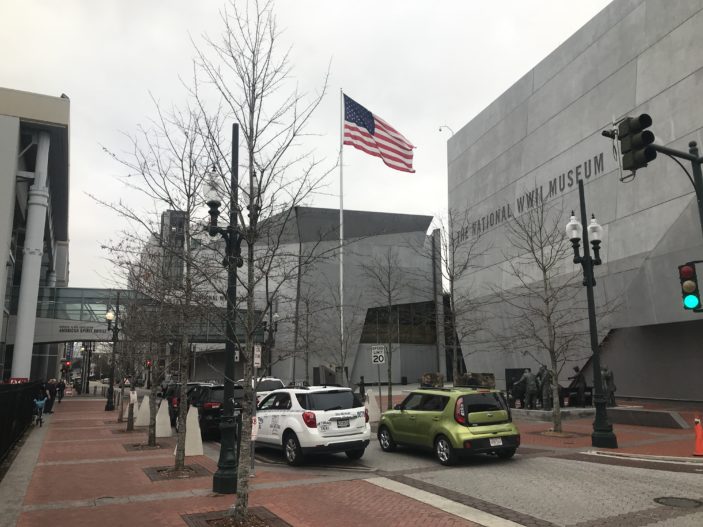 And then it’s another 5 minutes to the National World War II Museum, which is worth a visit to NOLA alone. The spectacular, interactive museum is designed as an immersive experience, where you trace the footsteps of soldiers during the war. A “4D” film you don’t need glasses for, Beyond All Boundaries, features the narration of Tom Hanks, and the talents of Brad Pitt, Tobey Maguire, Viola Davis and more were used throughout. It’s definitely worth the extra few dollars to check it out. I’ve never seen anything like it outside of a theme park.

Getting to New Orleans from Australia can be done a number of ways. You can easily connect through any of the North American hubs – though the closest you can get with a direct flight is to Dallas or Houston in Texas, with Qantas or United (respectively), and then jump on a flight to the brand new Louis Armstrong International Airport (which opened in November). Southwest are a reliable airline for short haul flights in the South of the US – and they are the only airline to give you two free bags on every flight!

It’s an affordable Lyft / Uber ride from the airport to the hotel, anywhere between 20 and 45 minutes depending on traffic and the time of day. At the new MSY, Lyft were utilising a system where they had Lyft drivers lining up, not unlike a normal Taxi rank. When you request your ride, instead of being paired with a driver, you’re given a code, and you show it to the driver who then enters it into their app to be paired with you. It expedites the process and here’s hoping it’s adopted at more airports soon.

The Ace Hotel New Orleans sits in a perfect location, and shows off the best features of the boutique brand, coming to represent the two decades of service and experience. A stunning building, redesigned with both modern comforts and its history in mind, it’s a hotel that’s worthy of your time – even if you’re not staying the night!

For more details about the hotel, which is located at 600 Carondelet St, New Orleans, LA 70130, head to their official website.

The author stayed as a guest of the hotel for two nights. Additional activities were supported by New Orleans & Company. All photos by the author.