Hilton Sydney is one of the city’s most reliable CBD hotels. It’s been that way for a long time, but not necessarily because of the guest rooms.

The location, directly opposite the Queen Victoria Building, is of course one of the primary reasons for the hotel’s enduring success, despite stiff competition from fresher-faced and more attractive neighbours like QT Sydney and Primus Hotel (soon to be reborn as Australia’s first Kimpton). You’re right next to just about every major shopping area in the CBD, so it takes no effort to walk on over to high-end incubators like The Strand, The Galeries, and Queen Victoria Building. Given there’s now a tram stop right outside, convenience is strong.

The historic Marble Bar, located beneath Hilton Sydney, is another strong pillar for the property. Luke Mangan’s glass brasserie is also quite a catch – asserting itself as one of the more likeable hotel restaurants in the city, largely due to a primo wine list and a penchant for good quality steaks.

My point is, Hilton Sydney has never been applauded for its rooms. Hilton hotels rarely are. They are always just… nice enough. They are highly functional, comfortable rooms appropriate for both business and leisure stays.

But I’ve never stayed at a Hilton where I would consider the accommodation to be particularly memorable. There’s just never been that much personality, or charm, to the behemoth hotel brand. At least not when compared to Hilton’s more youthful Curio Collection brand (of which Sydney’s West Hotel is a part), or their incredibly ritzy Waldorf Astoria.

An attempt to change that comes in the form a $25 million makeover. All 547 rooms, and 40 suites, have been remodelled, re-approached, and transformed with a modern touch. And by transformed I do mean changed completely, from the curtains to the tapware and the ever-important carpet. If anyone who has stayed at the Hilton Sydney pre-makeover were to walk into a guest room now, they’d think it was an entirely different hotel. 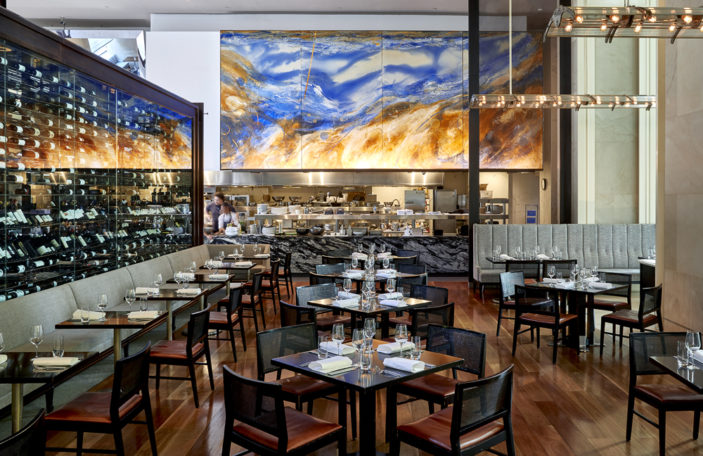 Importantly, the rooms are also much more spacious. My Corner King Room no longer has a chunky, connection-heavy work desk and an outdated office chair, but instead a lovely Italian armchair and a more casual looking table that doesn’t feel like it’s tempting you to pull out that laptop and get busy. Removing such obviously work-related features goes a long way in making Hilton feel more like a hotel where you’d want to lay your head – as opposed to a hotel where you’re still tethered to your office after-hours.

The new corner rooms also offer more windows – so more light – and slightly more space than some of the other room categories.

However that may spoil the ergonomics for business travellers, who have been choosing the Hilton Sydney for years given the rooms have been so sharply focused on productivity. A double-edged sword? Not really, you just need to have the good sense to request an ergonomic chair in advance of your stay.

The sleeker, sexier aesthetic unfortunately doesn’t do much for the bathroom. It’s still quite small, especially the vanity, and feels constricting despite a decently sized shower. The chosen bathroom amenities don’t inspire much confidence either.

Hilton Sydney has long been the gold-standard for business-minded hotels perfect for international travellers. It makes senses that the property would now attempt to reposition themselves as just as viable for staycationers and interstate travellers looking for a quick leisure stay in the city. In this respect, it’s been a successful makeover. The rooms feel livelier and look much more impressive, plus the hotel offers enough amenities to complete the picture of a well-oiled hospitality machine.

With rates starting at $209 a night, it’s clear this chain is ready to compete with some of the younger guns on the market. The average rate for a room at the fresh-faced Little National Hotel, for example, is around $229. Hilton Sydney’s rooms are larger, the hotel has an actual restaurant and numerous bars, a great day spa, and it’s more convenient for interstate visitors who want to make the most of the CBD’s many shopping areas.

Rates for rooms at The Hilton start from $209 per night