Forget The Strip: The Ultimate Guide to Downtown Las Vegas

The status-obsessed oasis of Las Vegas’ famous Strip may be the typical picture one would get of the unique desert city, but that would be akin to a polaroid that has been violently torn down the middle.

Behind the wide stretch of modern casinos and celebrity-endorsed kitchens sits Downtown Las Vegas – the city’s “old town”, if you will – which offers a slice of Sin City that’s both infectiously familiar and wildly different; that parties just as hard, but maintains a strong and unique sense of identity.

Some would say a week in Vegas is pushing it. But I get to differ. Whether it’s your first time in the seductive city of lights, or you’re a return customer, here are just some of the reasons to extend your stay and spend some time in fabulous Downtown.

Start Your Morning at “Eat”

If you really want to eat like a local around Downtown Vegas then wake up early and have breakfast at Natalie Young’s widely acclaimed Eat. The simple café-style layout houses some of the best morning starters you can find in the city, all classics done incredibly well like the comforting truffle egg sandwich, shrimp & grits, or chicken fried steak. It’s classic American diner food, but taken up a notch with the spotlight on quality produce and home-style cooking. Plus, it’s nowhere near as noisy.

Get Married to the Mob Museum

From Bugsy Siegel to the violent St Valentine’s Day Massacre, the mafioso roots of Vegas is legendary and transformative. Nowhere else has a U.S city been so shaped by the world of organised crime, and in such a unique way.

It’s then no surprise that DTLV is the site of the world’s only Mob Museum, a highly engaging, detailed and thoughtful narrative of mob history and how it has influenced Vegas throughout the years.

Some of the city’s oldest family’s have assisted in creating this comprehensive collection of mob memorabilia, which includes an authentic bullet-ridden wall from the aforementioned 1920’s massacre, actual weapons used by mob hit men (including a Tommy Gun that you can virtually fire), and remnants of the prohibition era.

In fact, the prohibition era flows throughout the museum, with its own underground speakeasy bar serving up classic cocktails (done exceptionally well) and even distilling (really good) Moonshine in an attached distillery.

Officially known as 18b Arts District (it was originally just 18 blocks but has since grown), Vegas’ hub of creativity, inspiration and colour is just a short walk from the main drag of Fremont Street. It’s here you’ll leap right into Vegas’ hipster scene, with dive bars, murals, sculptures, and eclectic galleries galore.

The best part is that it’s still growing quite substantially, with a seriously kinetic, offbeat vibe that thrives off cultural events like the annual Life is Beautiful festival (a long-time bucket list experience here at the AU), and monthly ‘First Friday’ block parties that celebrate, acknowledge and encourage local artists, restaurants, musicians and general creatives.

Before you stroll any further into the weird and eccentric part of town, grab a drink at the historic Atomic Liquors, Las Vegas’ oldest freestanding bar and a regular haunt for locals and visiting celebrities.

Unlike the immense global flagships found in The Strip’s luxury mall Crystals, or the coffee shops and boutiques hidden in the oft unexplored S Main Street, Downtown Container Park stands as the city’s most obviously hipster precinct. It’s an outdoor mall made up entirely of 40 disused shipping containers, all fitted out and transformed into casual restaurants (hello Nutella Doughnuts, authentic tacos, and epic loaded brownies), outlets for indie fashion labels, and cocktail bars.

There’s a giant kids playground in the centre, and a stage with a sizable green lawn at the end for performances. There’s even a small wedding chapel – because #Vegas – and a 25-seat mini-theatre for short films.

No one who visits Downtown would be able to miss it. At the entrance to the container park is one of several former large-scale Burning Man artworks that has found a permanent home adding to Vegas’ idiosyncratic art scene. Specifically, it’s the famous gigantic steampunk praying mantis built from recycled metal by aerospace engineer Kirk Jellum. It still breathes fire on occasion, towering over anyone walking past with a height of 40 feet.

One of the most valuable crates here is the open-air Oak & Ivy cocktail bar, a casual and intimate spot where outdoor seating is scattered and counter stools are highly sought. Vegas has some of the best mixologists in the country (the city has long been a proving ground for the country’s hospitality industry), and here classics are made with genuine top-shelf ingredients. Expect some excellent banter as well. 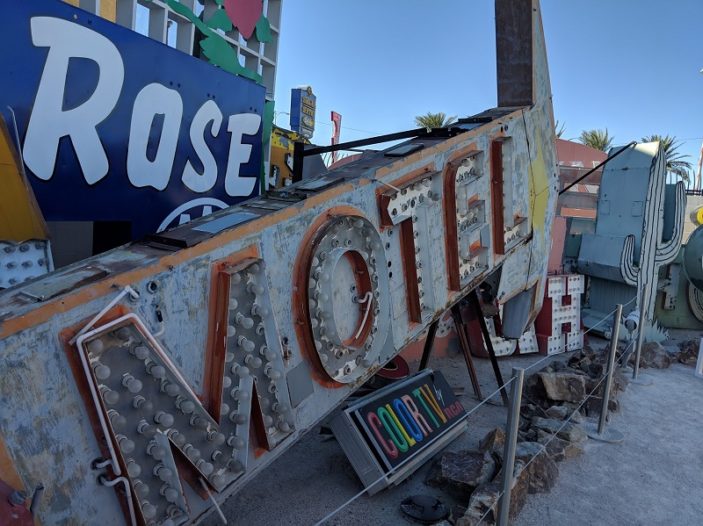 This is a boneyard for the discarded and pre-loved neon signs that once religiously served as the guiding lights of Sin City. And there is nothing like it in the entire world, making the Neon Museum one of the coolest and most engaging institutions in the country, by day looking like a car yard with signs both big and small telling the visual story of Las Vegas.

By night, the museums takes on informative guided tours where some 250 signs are featured, some lit back up, to help move the narrative along and reveal some of the secrets of Old Las Vegas.

The storage yard is around three acres, with restored vintage treasures like the original Aladdin’s lamp from the Aladdin Casino, and the original sign of the historic Golden Nugget, amongst hundreds of others from both casinos and smaller businesses like motels and dry cleaners.

Note, I don’t suggest walking there as it’s a bit far down Las Vegas Blvd, in an area that can be a bit rough. Catch an Uber instead.

Lose Yourself in the Fremont Street Experience 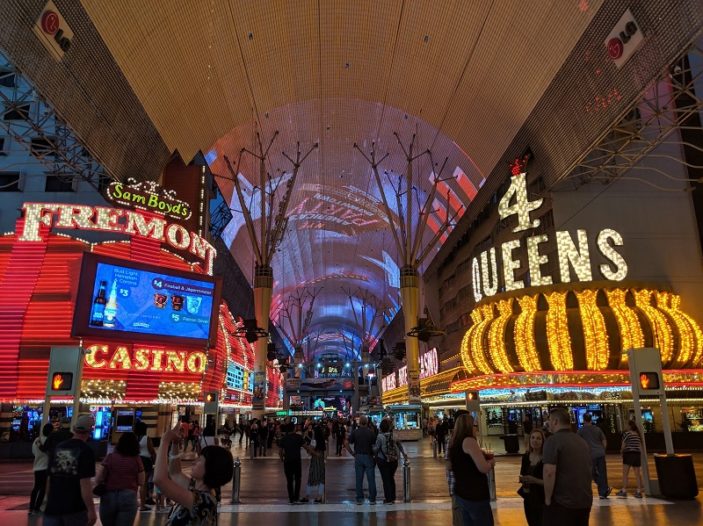 Let’s get the most obvious one out of the way first. You need to have the famous Fremont Street Experience. There’s just no way you can come to Downtown and not be lured by the iconic stretch of 24-hour partying, nestled under a huge 12.5 million-deep LED canopy (“Viva Vision”) that’s so mesmerising you’ll often find people sprawled out on their backs, watching as the visually spectacular show unfolds on the world’s largest video screen (approx. 1,500 feet long, 90 feet wide).

The intense pedestrian-only mall feels completely different from the maze-like complex of The Strip – for starters, there are no wide roads that can only be crossed via an elaborate series of stairs and bridges. 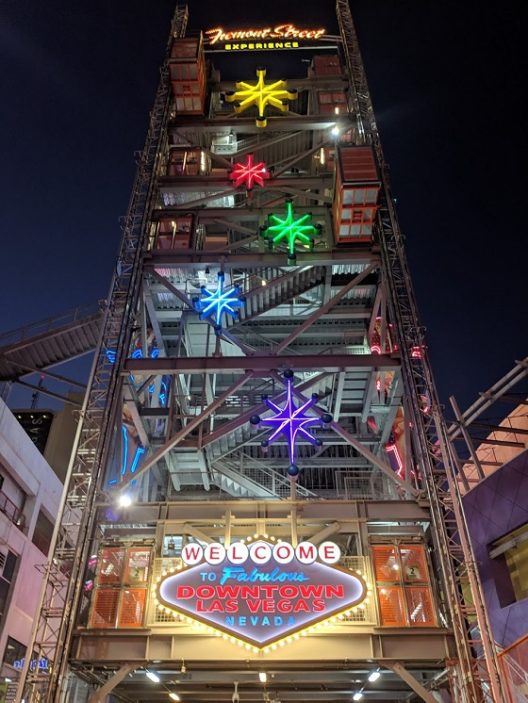 Here you’ll find eye-catching oddities like Slotzilla, a gigantic 12-storey poker machine off which people can take the 794 foot zip-line with speeds of up to around 32 miles per hour, over all the action (and exceptional people watching) that defines Fremont. It’s not quite the jungles of Phuket or the mountains of Whistler, but this is one of the most unique zip lines in the world.

Nightly live music on three different stages takes place up and down the seven block strip until around 2am every night, right alongside buskers and dancers who are found just about everywhere. Open-air bars hug the sides between sparkling historic casinos and upscale (and downscale – the notorious Heart Attack Grill is here) restaurants, cocktail bars, pubs and jazz clubs. It’s a one-of-a-kind street party, every single night.

While roaming around, don’t miss the opportunity to actually head into some of these casinos and, even if you aren’t a gambler, immersing yourself in all the action. Casinos are, ironically, the heart and soul that keep Vegas pumping all night long so you can expect some of these venues to go all out with design. The most notable is Golden Nugget, which shines so bright with its glowing white façade that it’s a large part of why Fremont feels like the sun is out even at 11pm. 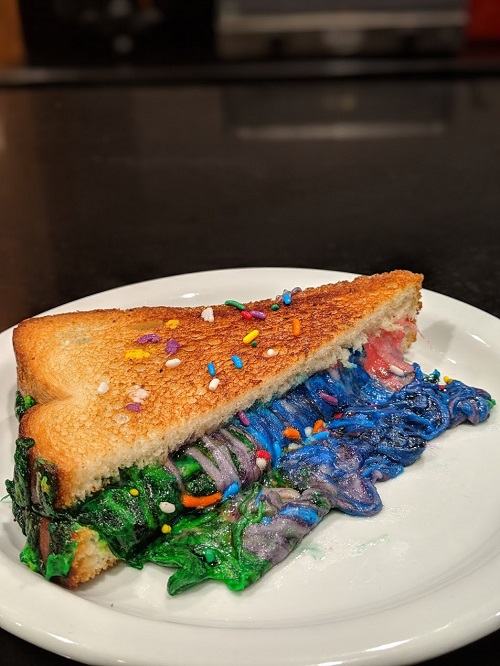 Give the pubs a go too. If you’re feeling particularly peckish, duck into the Gold Spike for live music after hitting up their resident diner Fiddlestix for an indulgent snack. The pub is somewhat of an adult playground, with games like sack toss and various pinball machines ready to distract you, while the Fiddlestix kitchen fixes up ridiculously large milkshakes and multi-coloured “unicorn” grilled cheese sandwiches.

Pack in a Late Night Dinner at Siegel’s 1941 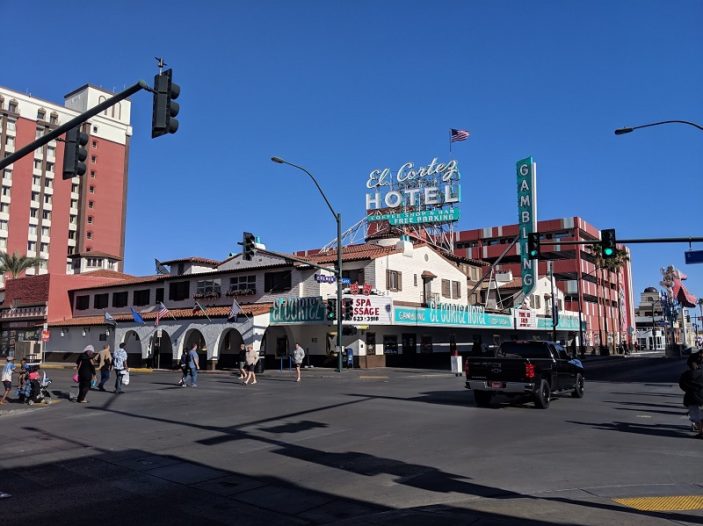 Even if you’re just doing it for the history, you need to step inside the El Cortez, located on the edge of Fremont, away from the loudest parts of the strip. It’s the longest continuously running casino in Vegas history, beloved by locals since first opening in 1941. Some say it has better odds than the rest, others just love coming here for the relatively new Siegel’s 1941, the casino’s late-night bistro modelled after the old Flame Diner and named so because the casino once partially belonged to none other than Busgy Siegel himself.

Sink into one of the seductive red booths and order up an exceptional Cuban sandwich, or scroll the hefty burger list which includes the favourite Meyer Lansky Burger, which gets its impressive height from a pile of pastrami smacked between the buns with Swiss cheese, cole slaw, pickles and Russian dressing.

Rest Your Head at Downtown Grand 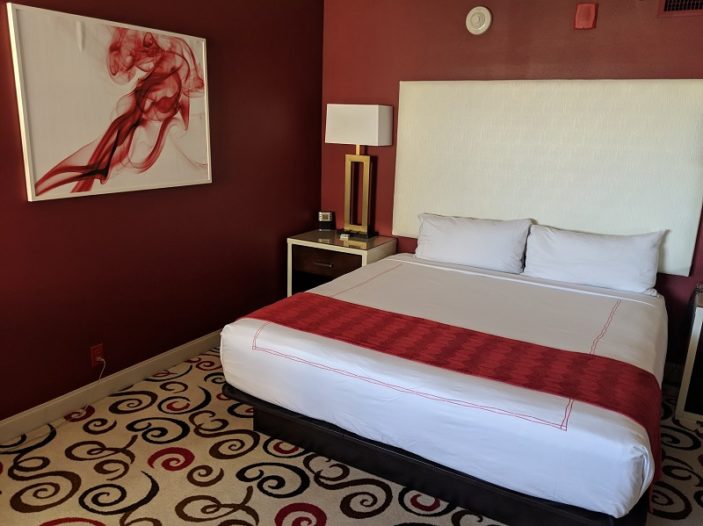 Conveniently located just off Fremont Street, almost opposite the Mob Museum, and a short stroll from 18b Arts District, Downtown Grand is the primary accommodation in the area and certainly the most convenient.

Housed in a historic building that used to be the Lady Luck casino, the hotel (with its requisite casino attached) gets by with its modern fit outs, comfortable guest and spacious guest rooms, and an enormous third level pool deck that clocks in at around 40,000 square feet and has been known to host some of the most raucous parties this side of The Strip, with guests either dancing in the pool or parked up at the al fresco gaming area.

And while you can still hear the thump of Fremont Street from your room at 1am, it’s much quieter than most other hotels you’re going to get in this part of Vegas.

Las Vegas is one of the most unique window seat experiences in the world. Whether you’re flying in or out of the city’s McCarran International Airport, it’s exciting to watch the scene unfold below you. It’s a vast desert kingdom snaking around a secluded metropolis, looking like a new age monopoly board lost in a sea of gold dust and towering sandstone mountains glowing with red, pink and orange hues.

Nature beckons in Nevada, even if it may not be immediately obvious once you’re fully immersed in the neon playground. Take a break from it all by booking in with the reliable Pink Jeep Tours for a day trip to Red Rock Canyon. It’s cheaper and faster to get to than the much more well known Grand Canyon, and less crowded than Lake Mead, but no less impressive with the impressive Wilson Cliffs and expansive Calico Hills.

You’ll pop by the comprehensive Visitor Centre, which offers extraordinary panoramic views of the ranges, before getting up close to the unparalleled natural beauty of these jagged, colourful rocks which morph as the sun moves, as well as the lush vegetation, consisting of more than 600 species of plants, covering the epic Spring Mountain Range.

The writer travelled to Las Vegas a guest of Nevada Tourism and Las Vegas Tourism Authority..