Whisks at the ready, The Big Bake comes to Sydney 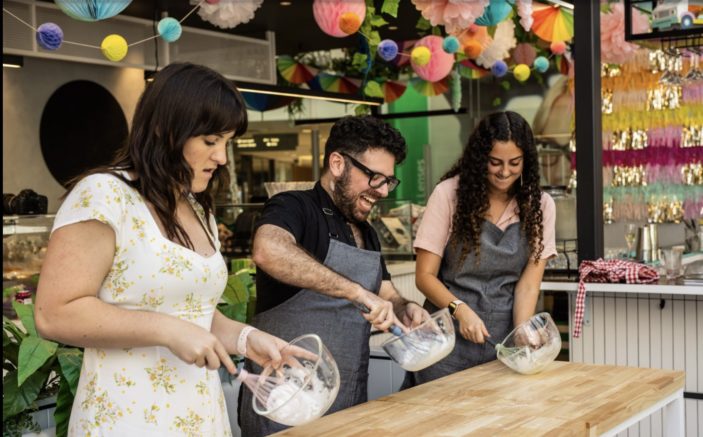 Copious amounts of sugar, a baking competition and a cocktail bar – what could possibly go wrong?! The Big Bake Sydney is a pop up baking experience where you team up to compete for the title of Baking Champion. Loosely based on the popular Canadian television show of the same name, The Big Bake incorporates baking challenges with hilarious games such as seeing who can shove the most marshmallows in their mouth and who can fold a cake box the fastest.

The first big decision you have to make is which recipe you want to bake. On this particular night we all chose cupcakes, potentially believing it was the easier option (it wasn’t). As the sound of electric mixers filled the air and the sweet, sweet smell of sugar began to overwhelm our senses, the playful competitiveness that had been bubbling beneath the surface began to overflow – just like our piping bag full of cream cheese icing.

As you work your way through the recipe the incredibly friendly organisers are on hand to grab you anything that you need that wasn’t already pre-prepared at your baking station. While your creation is in the oven you are kept entertained with some charades and various other games which included moving an oreo cookie from your forehead into your mouth without using your hands or dropping it. Sound easy? Apparently it’s not and I was later informed that I am only the second participant to have achieved this. My life’s work is done.

Once the cupcakes are cooked and the frosting is made it is on to the serious part of the evening – the decoration. A timer is set and armed with a piping bag and an assortment of lollies we embark on a mission to create something beautiful.

Over the course of the event the separate teams have accumulated points based on the various challenges and by this stage my team mate and I had resigned ourselves to the fact that we were trailing behind. In a surprise twist no one saw coming, we won. Our cupcakes were deemed the best, we were awarded 30 points and crowned Baking Champions. Perhaps it was all the sugar or perhaps it was the two cocktails, but I was absolutely elated.

On the whole The Big Bake is a highly entertaining event that will teach you things about yourself you never realised. I would suggest changing up the music to include some baking – themed tunes such as Sugar, Sugar (The Archies), Sweetest Thing (U2) and Candy (Mandy Moore) and make the words used in the charades challenge more difficult and cooking related. I’d also recommend keeping it to smaller groups of participants. We were fortunate there were eight of us involved and it was the perfect size for the space and to create that balance between playful competitiveness and ‘I want to shove this whisk in your eye’.

Some things to note if you are thinking of attending: dress casual and don’t wear white clothes or open toed shoes (while aprons are provided you will get messy), there are vegan and gluten free options so be sure to stipulate any dietary requirements in your booking and the event was very difficult to find so arrive early.

The Big Bake currently has tickets available at the MetCentre in Sydney until 30th April 2021, with tickets ranging in cost from $30-$57.55. For more information and to book check out the website.