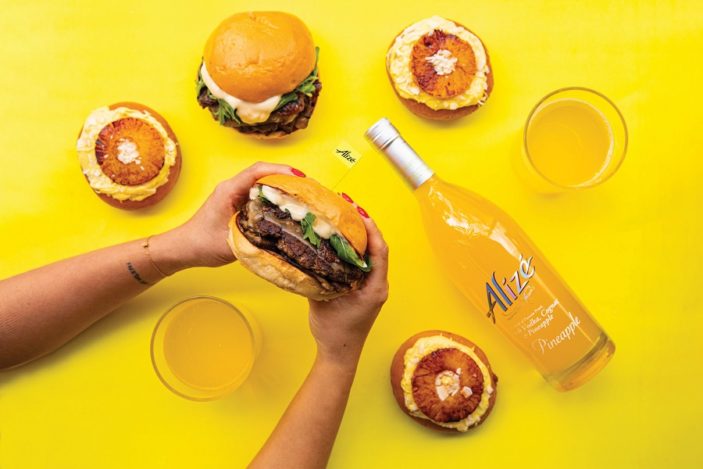 Mister Gee North Strathfield, which is still rolling after many years as one of the absolute best burger joints Sydney has ever seen, is about to drop something very, very unexpected on us.

Teaming up with Alizé to celebrate the new Alizé Pineapple infusion, Gee will be taking a hard left turn from what one would usually expect from the burger truck, with a two-day-only pop-up driven by an all-new OG Pineapple Burger and boozy pineapple-infused donuts.

Available only on Friday 25th and Saturday 26th February, the Mister Gee x Alizé Pineapple pop-up will present a different kind of burger party, which Sydney has never tasted before. It all sounds incredibly unique, especially that $13.50 OG Pineapple Burger, which will re-build one of Gee’s most popular burgers, the OG, with a new version that has Havarti cheese, rocket, and tarragon mushrooms stacked with a tender grass-fed beef (or veggie) patty and juicy Alizé Pineapple and onion jam, as well as a generous dose of Gee’s renowned truffle mayo.

The limited edition pineapple burger will be available each night, alongside some of Gee’s regular favourites like the Stoner’s Revenge.

DJ Mowgli May will be on the decks each night from 6pm – 10pm to help with the party vibe, which will be fuelled by Alizé Pineapple and lemonade concoctions and those aforementioned donuts which are $6 a pop and host passionfruit jam topped with Alizé Pineapple icing and a sprinkle of toasted coconut and burnt pineapple.

Every Alizé OG Pineapple Burger or Alizé x Mister Gee Donut purchased on the night will come with a token for a free glass of that sweet, sweet Alizé Pineapple and lemonade cocktail.