You know. Those one’s you’d never stumble across on a casual night out, but be proud of finding regardless. That’s Lorraine’s Bistro to a tee. It’s a beautiful new space opened above Waverley’s iconic Robin Hood Hotel, set on changing the perception of pub restaurants in the area. And given it’s so close to Bondi, you might as well as consider it a very welcome arrival for French food to the beachside suburbs, when traditionally you’d be thinking more Paddington, Potts Point, and the CBD when you’re after some escargot and steak frites.

Now some may have a stigma still attached to pub restaurants. They just can’t compete when high-profile standalone restaurants. Right? Wrong. Very wrong.

Lorraine’s is – and I’m not going to suppress for the sake of a thinly-veiled sense of credibility here – a fantastic restaurant, and one which I’d happily return to any day of the week. Not only is the food excellent, with not one thing (okay, maybe one thing) throughout the night leaving me overly disappointed, but the space is also a joy to be in.

For one, you’ve got a large glass skylight pulling the sky in and giving you the feeling like you’re dining under the stars. Of course, the indoor twilight dining perception is just that, a perception. You won’t actually see any stars in Sydney anymore. They don’t exist. But what you will see, if you’ve made the wise choice to opt for an early dinner at Lorraine’s Bistro, is the city’s characteristically multi-hued sunset surrounding you while you eat. Lorraine’s has no issue when it comes to ambience.

Now that I know to trust the chef, I’d think ordering up a set menu would be the best way to at Lorraine’s Bistro 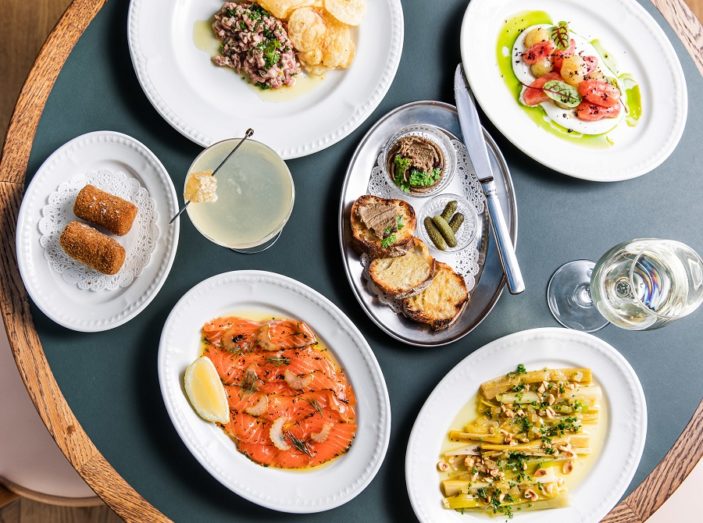 Although if you want to go a la carte, here’s what to order.

The feast here starts best with some creamy chorizo croquettes, which will set you back $16 for 4. While they are quite large, it’s a bit of a punchy price for a starter but worth it if you can justify the spend nonetheless. Some bread with smoked Pepe Saya butter is, of course, a no-brainer, especially if you’re saving it to mop up some of that deliciously baked camembert which is rich, gooey, indulgent, and absolutely what you’d want from this quintessentially French dish.

The Cantabrian anchovies with lemon are simply presented without any extra trimmings, although perhaps they were doused in a bit too much oil. Anchovies are having a swift resurgence in Sydney’s dining scene right now, but more often than that they are served simply laid on some good quality lightly toasted bread. Instead, here are four rather large anchovies laid neatly swimming in a bit too much olive oil.

While that was a slight bump to a good starter, the smoked Jack’s Creek beef tartare is a step back in the right direction. Light, slightly creamy, and rich. I have high expectations when I see Jack’s Creek on a menu – they’ve won World’s Best Steak consecutively for a good few years now, and for good reason – and they were well met with this excellent take on a French classic.

A $12 spinach and blue cheese gratin on the side? Pass. The blue cheese was on the heavier side and was much too powerful. A better side, instead, is the classic pommes frite or bitter leaf salad with walnuts. Those are great accompaniments to whatever main you choose, which is probably going to be the Cararecce pasta and Jacks Creek Black Angus Cote de Boeuf. Although smart money will go with the Woodfired Savory Cabbage. I know, it doesn’t sound as sexy, but the cabbage with gorgeous cashew sour cream, pickled raisins, and macadamia was the biggest pleasant surprise of the night. Those with more limiting dietary requirements really don’t have much to choose from on the menu, so this more than makes up for that.

Now, the biggest disappointment of the night: the chargrilled WA octopus with harissa. Great, big, juicy and perfectly textured tentacles generously served as simply as possible. But just a bit too much sauce. So much, in fact, that it completely drowned the taste of the sea creature, despite it being well-sourced and obviously begging to be kept as natural as possible. WA produce some of the best octopus in the world, so the fact that they couldn’t get this right perhaps speaks to a bit too much zeal and a desire to do something different. When it comes to seafood, you don’t want to rock the boat too much.

Lorraine’s Bistro is an entirely worthwhile addition to the area. Although more important, it’s something you’d want to travel to even if you didn’t live in the area. I can’t say I’ve done much exploring around Waverley. In fact, I don’t think I’ve ever actually been there despite having grown up in Sydney. That’ll change. Lorraine’s Bistro is somewhere I’d revisit without hesitation. Even if the prices are slightly steeper than you’d want from a pub restaurant. As such, it’s not somewhere you’d eat at every night (French food shouldn’t be anyway – too much butter) but it’s a great choice when you’re looking for something a bit different in Waverley (or near Bondi).