Last week, I jumped on board Virgin Atlantic‘s flagship route from Heathrow to JFK on board the new Dreamliner 787. How does the service stack up? Here’s today’s flight review…

Check-in and Baggage at Heathrow

Delta Air Lines and Virgin Atlantic customers enjoy the same check in area in section A of Terminal 3. Premium flyers (those who can access The Clubhouse) have their own check in area and security lane. I had purchased the most basic of economy tickets which meant that I travelled with a carry-on bag only; even being a Velocity frequent flyer I would have had to pay extra for checked luggage. So this made my check in process a lot easier. All I had to do was swipe my ticket which was already on my phone to get access to the priority check in lane. Learn more about your Virgin Australia Velocity benefits flying Virgin Atlantic HERE.

As a Velocity frequent flyer, I had access to The Clubhouse, which is located at Lounge H, and is a massive space with dining area, plenty of areas to relax… and no matter where you’re sitting, they provide table service. Being a lunchtime flight, breakfast was still being served, and there was a cereal station, with pastries, freshly cut meats and fruit, as well as juice and water available as self service. All hot food was a la carte by table service. And they were fast to help, and the food came out even faster. They also walked around with pastries while you waited for your meal. You could visit the barber or the spa if you had time, or have a shower, though by the time they started boarding I’d barely finished my Eggs Benedict.

It wasn’t a very full flight, so boarding finished quite early. It was orderly and they were quick to help.

This was a very new Dreamliner, with purple lighting on the roof, and red lightning coming down the sides. It made for a relaxing atmosphere. And I can honestly say I had no jetlag in New York City. It was a day flight though, and I had a whole row to myself so I had a bit of a nap – so take my experience with a grain of salt. As for the seat, it’s very comfortable, with movable headrest sans movable flaps; rather a stationary slant which serves as a comfortable place to rest your head.

Touch screens with the “Vera” entertainment systems are the same that they use on most Virgin Australia and Delta international flights, and come with every economy seat. The USB and headphone jack are in the screen, and there’s an international AC plug under the seat. Screens worked until we got to the gate, though didn’t start working until after the safety briefing.

Menus were handed out shortly after takeoff, followed by a a drink service with pretzels! There’d be one main meal service and then a “Mile High Tea” shortly before landing. The former served a Japanese Cucumber Salad with either a chicken breast in mushroom sauce, a chilli con carne or a pesto pasta. A “Gü Pot” was the dessert, a chocolate and Yuzu Caramel Ganache. It also came with cheese and crackers and a small bottle of water. Wine was also available alongside the meal, and hot towels came out before the meal. All in all, the meal tasted great and was of a decent portion size. 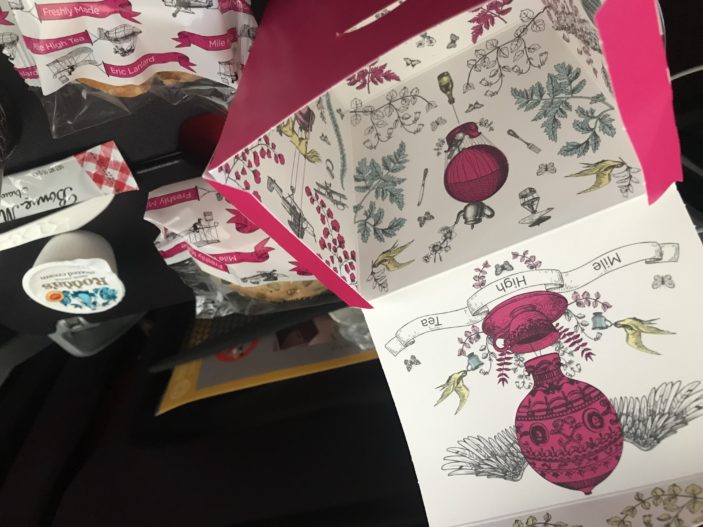 The playfully named “Mile High Tea”, meanwhile, was a roll with mozzarella and pesto, tomato and rocket. This was served with a scone with jam and cream, and PG tips tea or coffee. It came in a pink box which reminded me of some of the Hendricks Gin branding. The scone was a bit tough to cut and eat, but otherwise it tasted great. Since the flight time was reduced by an hour, the meal service came a lot sooner than it normally would, meaning we never went hungry on the flight.

The flight staff couldn’t have been more cordial, and were quick to attend to any needs, be it an issue with a seat or the need of another drink. And should you have been sleeping during the second meal service, they didn’t wake you. As it was a day flight, they also never turned off the lights off or got people to close their window shades. Which is rare for a flight of this length, but with some eyeshades, it was very much not noticed. I had a good, though brief sleep, between meals and some episodes of Alan Partridge.

On arrival at JFK

Hot tip on arrival: JFK can be a bit of a mess. This isn’t helped by the fact that a lot of travellers don’t know what they’re doing, and tend to clog up the lines. So if you are able to use to automated machines, make your way towards the back of the area and you’ll find less people and it will expedite the process. Even with some crazy lines I managed to make it through pretty quickly thanks to sneaking past the clumps of confused travellers.

Getting to the city from JFK can be done entirely by train, with a $5 Airtrain service taking you to one of two stations. But keep in mind there are multiple Airtrains as such… I got on the wrong one, which still got me to where I needed to go, but took longer. One goes to Howard Beach and the other to Jamaica, which has the faster train to Manhattan. It’s $7.75 all up for the journey, plus $1 for a new Metrocard, which you’ll want to keep.

This is a superb and virtually flawless service. If you have Clubhouse access, too, you are made to feel like a rockstar from start to finish. I’ve honestly never had a better flight over the Atlantic. Virgin know how to do it right…

To book your next trip with Virgin Atlantic, head to https://www.virginatlantic.com/.

The author travelled at his own expense.