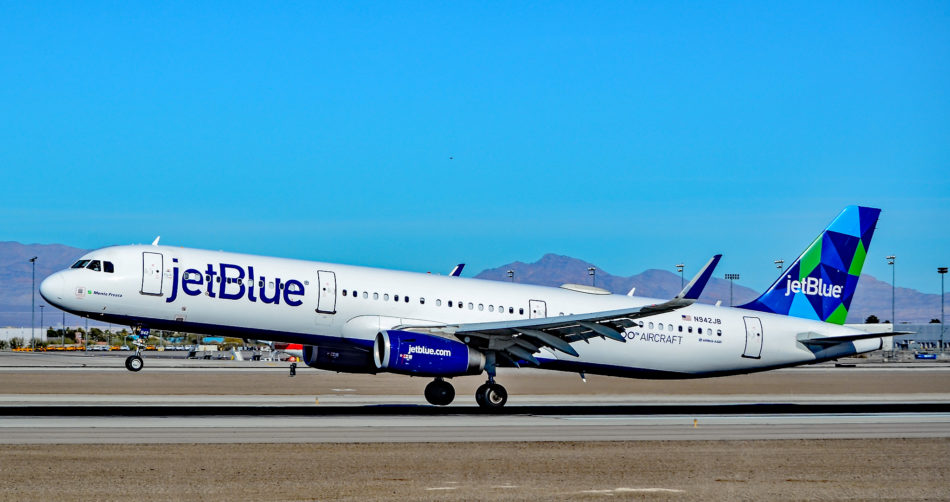 I’ve heard a lot about the JetBlue service over the years, with the US airline often topping domestic lists for in flight experience, comfort and customer satisfaction. Though in more recent years the airline has fallen from grace on certain lists. Within 12 months I saw it sitting near the top of some lists, and then at the bottom of others. So suffice it to say, the airline has had a mixed bag of feedback of late. With their routes limited compared to the other airlines I frequent, I’ve never had the chance to see if they live up to their reputation one way or the other. Until now. Last month, en route to SXSW, I finally had the chance to try them out for myself – departing from their brand new Terminal 5 at JFK in NYC. So how did they fare?

At JFK: Departing From The New Terminal 5

JetBlue flights depart from Terminal 5 at JFK, which is a recently upgraded terminal operated by JetBlue. For such a new operation you’d think they would have orchestrated a better check in system, but it was a bit of a mess – half a dozen staff members having to direct and create lines instead of using a regimented system (in fact most of the “line” area that was structured wasn’t even being used). This caused difficulties at every point of the check in and security process. Which starts with using a machine to print your ticket and bag tag, to take to the a drop off point – which again, didn’t have any clear line system and a lot of confusion.

That said, it didn’t take all that long; I was through the process in about 45 minutes. It just caused unnecessary stress for staff and customers and proved a poor use of the space. On the other side of security you’ll find markets and great restaurants across the 30 gates in the terminal. Very comfortable indeed and feels brand spankin’ new.

One striking new addition to the Terminal 5 area is noticeable by an returning name to the area: a bright red TWA logo (an airline not seen since 2001), which sits on a building opposite the Terminal 5 entry. The building itself was the TWA Flight Centre, which operated as a terminal for TWA flights at JFK from 1962 to 2001. Now, it’s returning as a retro-fuelled hotel; set to open on 15th May 2019 as the first on site hotel for JFK. The accommodation is sure to excite fans of air travel history, with 512 (!) mid century inspired rooms, with furniture designed by the architect of the original terminal, Eero Saarinen, who didn’t survive to see it open in the first instance, let alone now. But he remains its driving inspiration.

The hotel will offer overnight and shorter term accommodation, a 10k square foot fitness centre and there’ll be six on site restaurants, including the Paris Café by Jean-Georges Vongerichten, which will be situated in the same location as a cafe of the same name that closed along with the terminal in 2001, and see a menu that will take inspiration from the dishes served by TWA in its lifespan. There’ll even be a cocktail lounge in a restored and repurposed TWA Lockheed Constellation L-1649A.

This may just be the ultimate hotel for travel nerds and I can’t wait to check it out.

It’s USD$30 extra for your first baggage, which you can pay in advance when you check in online. It feels like these costs just keep going up and it’s not like ticket prices are getting any cheaper – though they are affordable.

Boarding commenced about 50 minutes before the flight was due to depart; baggage drops hadn’t even technically finished at that point (they close 40 minutes prior to departure), with boarding via zones found on your boarding pass. It made for an easy boarding process. While you wait there are ample charging stations at the gate and some iPads to enjoy. I was in the last group to board and there wells next to no storage space by that time. It’s an ongoing issue with airlines that encourage you to stuff everything into a roller bag carry on. They really need to figure that out.

There’s entertainment at every seat through a touch screen on the back, with a remote and headphone jack in the armrest. A credit card payment system is built into the screen too (though entertainment is free so it’s unclear what you use that for), and the USB charger and AC plug is underneath the seat. A nice touch for the seatback too is a drink holder. The entertainment has movies – new releases and classics – TV shows and live TV from Direct TV. I can’t vouch for everything in the system, but what I did see was uncensored which is an added bonus; a lot of US airlines still only offer censored product which you’ve probably seen me complain about in the past on the site.

The seat is a comfortable leather seat with decent leg room, including a movable headrest with flaps. The plane felt pretty new, and there wasn’t any wear or tear to be seen. The service was good, and they dimmed the cabin lights for a lot of the flight as they were landing around 1am so it was treated as a red eye.

There’s free non-alcoholic drinks served in flight with the option of alcoholic drinks and food for purchase. They do the service pretty soon after take off so you can get some rest.

Their service is great, but while they may have set a benchmark years ago when they were looking to give Virgin America (RIP) a run for their money – they seem to have let things slide in recent years, to the point that they’ve ended up on the bottom of lists they once sat towards the top. But from my on board experience, I don’t see why – there was nothing not to love about the experience. And bonus points for uncensored movies (at least the ones I was watching, which Delta had censored).

On ground, however, in a terminal they operate, they have a lot of work to do. It’s still a relatively new terminal, however, so hopefully they get it running better in the future. They also need to reconsider their approach with checked baggage, as it makes the on board experience all the more difficult when the bins are overcrowded and you have disgruntled passengers who have no where to put their stuff. But in saying that, even Southwest has those problems, and they give you TWO free checked bags. So I don’t know, I’m taking us off topic here. I’m really excited about that TWA hotel though.

To book your next flight with JetBlue, and to find out more details about their network, head to jetblue.com.