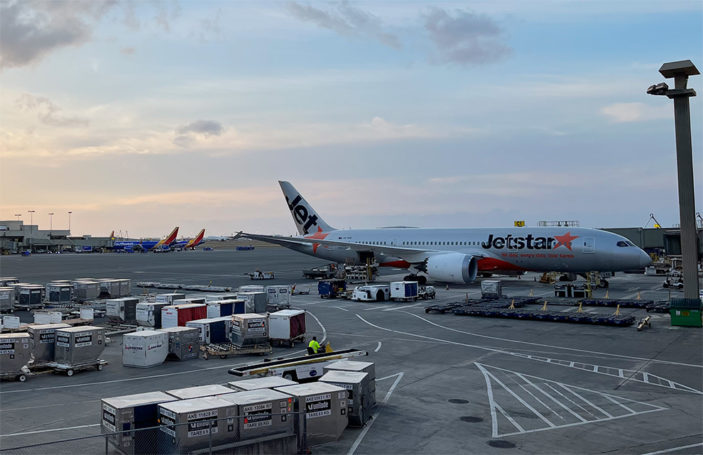 As part of their long haul fleet, Jetstar have the distinction of being the only budget carrier that takes Australian passengers directly to the USA.

The airline travels a few times a week between Melbourne, VIC or Sydney, NSW and Honolulu, offering an affordable alternative to its competition, as well as being the only airline that will allow you to book a one way flight across the Pacific that isn’t more expensive than a return flight, which for certain travellers (especially those who may want to incorporate frequent flyer points into one leg of their travel), can be particularly ideal.

And for me it absolutely was. So last month, I flew back to Australia from Toronto, Canada for less than A$700 one way (total… in December), by combining a flight with one airline to Honolulu, where I stayed at the incredible Waikiki Beach Marriott Resort & Spa, before continuing on to the Jetstar flight to the Victorian capital.

Also – hot tip – this is the best way to avoid jet lag when flying west bound over the Pacific.

But that’s not to say booking with a budget airline doesn’t come without its own set of risks. Last September, Jetstar entered the news for all the wrong reasons, with half of its long haul fleet grounded, leading to substantial cancellations, people stuck at international destinations, and a general PR disaster.

But unsurprisingly, since then, things have vastly improved (though it’s still far from ideal – 7.2% of Jetstar flights in November 2022 were cancelled), while the airline sits comfortably on the list of the 20 safest low cost airlines in the world. This according to https://airlineratings.com/, who ranked Jetstar’s parent airline Qantas at the top of the list.

So, with all that in mind, how did my experience on the budget airline fair? Here’s a run down of the experience.

Checking in at Honolulu International Airport

The 8am flight time ensured it was still dark when I arrived at Daniel K. Inouye International Airport, and the Jetstar flight to Melbourne was one of the only counters seeing substantial passenger backlog.

With no online check-in available before the flight, there was a substantial queue two and a bit hours before take off. Luckily it moved fairly quickly, and I got through it in about half an hour. Staff were helpful and, in spite of the hour, served passengers with jovial spirits. Then security (made up mostly of the Australian travellers) took another 25 minutes.

After security, there wasn’t much open before 7am, with just duty free, Starbucks, Burger King and the California Pizza Kitchen open. Things started progressively opening as we got closer to boarding, and if you didn’t pre-purchase a meal (which is only possible more than 24 hours before your flight), I would recommend getting yourself something to eat on board. I had a Caesar salad from CPK and it was a godsend on that long flight.

I have to say, Jetstar do a really great job on the boarding front. They board by rows, from the back to the front (bar business class), the almost perfect system to expedite the process. I’ll never understand why more airlines don’t do this, but then again given how many people line up in spite of their line not being called, you can understand why some won’t bother.

But, very much to their credit, they wouldn’t let them board, and kept making announcements to ensure only the right people were in the queue. The only difficulty was the crowded gate made it very difficult to form lines, even when your row was called. But it all worked and there was no backup on the jetbridge! Magic! Other airlines please take note.

There’s a touch screen on the back of every seat. The airline charge $13 for you to use the in flight entertainment, or you can pay $9 to watch a movie like Thor: Love and Thunder. You can also listen to a single album for $6, or all albums inclusive in the $13 “all access pass”, which is also the only way to watch the TV programming. And just worth noting – radio stations and music videos have been removed from the systems. 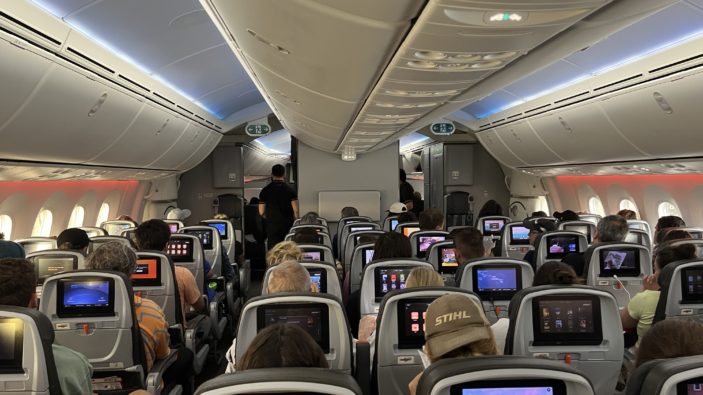 The USB power though comes free and will be a lifesaver for those who come pre-prepared with mobile content. There is some limited free Jetstar produced content as well as the ability to view details about the flight and the obligatory live flight map (which somehow seemed to think we were simultaneously in Melbourne and Honolulu?).

Earphones were distributed complimentary and there was no wi-fi on board.

Seats have 5″ max recline and moveable headrest with flaps, with 30″ of leg room. Incredibly, this was more recline than United’s Dreamliner offers over the Pacific (only 3″ unless you’re in an “Economy Plus” seat); though United offer an extra inch of seat pitch. So, while many airlines offer more, the comfort levels were surprisingly competitive in an industry which by and large has been actively reducing Economy comfort levels over the years.

That said, the Dreamliner is an incredibly comfortable jet, built to help provide better internal cabin pressure; the touch screen windows do well to keep lights dim even on a day flight, the plane itself as well as the bathrooms were clean and comfortable, and a shout out to the unique swivel door on the bathrooms of the Dreamliner which I enjoy aesthetically.

Turbulence was minimal, and though strong headwinds meant the flight was a little longer than normal, the difference between 10 and a half hours in the air and 11 hours in the air (not including time on the tarmac) was pretty insubstantial – it’s a long bloody flight to not get any sleep either way!

After take off, cups of water were distributed, and then the first meal & drink service not long after that. They take time to distribute pre-paid meals between the two. If you want to pre-purchase (which comes with a discount I believe and a guarantee of a hot meal), you need to do so 24+ hours before your flight. Everything bar water needs to be paid for, though they were happy to give out some hot water (hot tip: BYO tea bag!).

Another service with prepaid meals, and then shortly after for purchase, about 6 hours into the flight. There was still a good 5 hours to go. They regularly walked down the aisle with water and it seemed like if you wanted something outside of those times, they would let you purchase something.

Customs forms for Australia, which remain physical (a missed opportunity over the pandemic was changing this, as has happened in the US and Canada), are handed out along with the cups of water shortly after take off.

On landing, there was an acknowledgement of country – which was the first time I’ve ever heard that on a flight landing in Australia. Wonderful! But beyond that, the arrival process for an Australian passport holder couldn’t be easier; it’s exactly was it was pre-pandemic now.

With all the reported cancellations in September, I booked this flight with plenty of trepidation. They only offer two flights a week between Honolulu and Melbourne, and should the flight be cancelled, I would have likely been stuck there for days.

Such is the risk of budget airlines internationally – but at the price point they offered, it proved well worth the risk. And thankfully, though there was a short delay on take off, and we were in the air a little longer than normal, it all went off without a hitch.

Beyond this, there’s little to write home about when it comes to a Jetstar flight. You don’t get anything inclusive, and the 11 hour flight time ensures it’s a long experience without those inclusions. But they are there if you want to pay for them, it’s a day flight so you don’t have to sleep, and you can bring on your own food and entertainment.

Across the board, staff were great, the flight as comfortable as it could be, and they ensure you’re hydrated at the very least (which hasn’t always been my experience flying on budget airlines – I’m looking at you Scoot!). And most importantly – there aren’t any surprises that they don’t actively promote when you’re booking your flight.

So unlike airlines who change their policies regularly, you very much know what you’re getting when you fly on this route. You can’t complain about something you know you’re not going to get.

To get across the Pacific this affordably can be a godsend when you need it, and though the limited number of flights means there is inherent risk in a cancellation (a risk with any airline, but the more flights they have the easier it is to be rescheduled), I would argue it’s well worth the risk. And I would absolutely fly them on this route again. And seriously – fly back via Hawaii if you can, Jetstar or not. I avoided jetlag completely by getting some time on the beaches of Honolulu on the way home.

Jetstar flies between Melbourne and Honolulu on Sundays and Wednesdays. For tickets and more details head to jetstar.com.

Photos by the author. The author flew at his own expense.

Whilst in Honolulu, the author stayed as a guest of the Waikiki Beach Marriott Resort & Spa.