Flight Review: Business Class from Noumea to Sydney with Aircalin 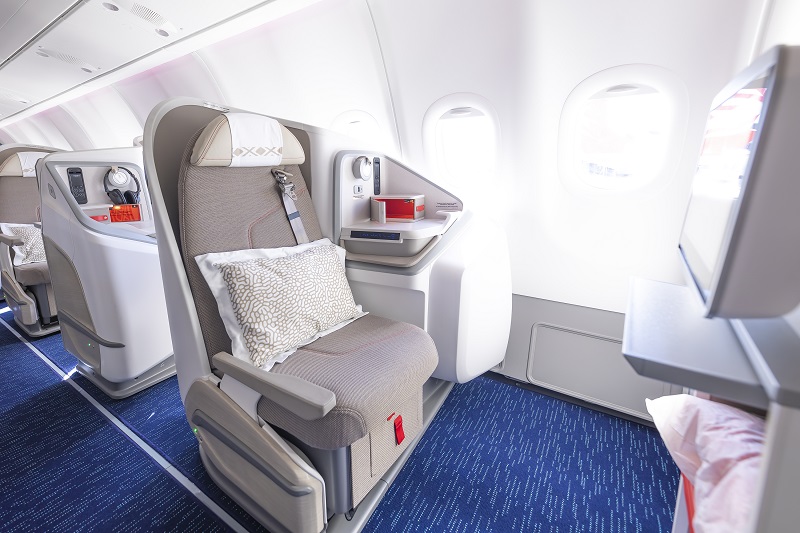 New Caledonia’s flagship carrier Aircalin now have the distinction of being the first ever airline to bring the new-age A330neo aircraft to Asia-Pacific. And of course they’ve used that considerable boost in capacity to enhance their Business Class services between Noumea and Sydney, making the journey for Aussies looking to explore New Caledonia not just more accessible, but substantially more comfortable.

Aircalin allows for two pieces of checked luggage up to 23kg, which is very generous and even applies to those flying Premium Economy. Carry-on is also sizable at a 12kg limit, plus a personal item.

Noumea’s La Tontouta International Airport is small and easy to move through. Check-in and security are simple and efficient, although there’s a distinct lack of food options in the terminal.

The Aircalin Hibiscus lounge is located on the second floor of La Tontouta airport, directly above the check-in gates. It’s narrow but quite large, and relatively unadorned when compared to the typical business lounge. There’s a distinct lack of character, although few local artworks attempt to add some visual flair. Seating is plentiful and there’s even a more private space at the far-end for work or business gatherings.

Snacks, tea, instant coffee and other drinks are available at all times in this basic lounge, which is more than enough if all you want is a quick bite and fast free Wi-Fi before your flight. Champagne seems the main go-to for people here, and since it’s New Caledonia, the quality is great.

Aircalin’s signature Hibiscus (Business) Class has received a substantial upgrade on board the new aircraft, including an entirely reimagined layout and impressive new seats. There’s enough cabin bin space to easily give each of the 26 seats plenty of room despite the absence of any bins over the central rows.

Bottles of Evian water were handed out promptly before take-off, and soon after a drinks service with Champagne or juice came around. Take off was timely and smooth, as was landing.

A modern look helps Hibiscus stand out amongst the other cabins. Various Melanesian motifs mean that splashes of orange hues and seat covers inspired by local weaving helps soothe the in-flight experience. I spotted colour references to sandy beaches and New Caledonia’s sightly red earth, which looked great against the white and beige tones of the seat shell.

I was seated in 6E, which is a middle aisle. The decision to go with Stelia Opal as the new seats was wise – they new-generation compact staggered seats are gorgeous and feature a number of intelligent design choices to streamline the fully-flat experience. These seats were also chosen by notably Singapore Airlines and Turkish Airlines, with the main difference being in small design choices to bring them closer to the Aircalin brand. They are meaningful and welcome changes from the 2-2-2 pods which characterise Hibiscus Business Class on older Aircalin aircraft.

With the cabin well organised, Aircalin have optimised the seat’s spacious layout and each passenger gets direct access to the aisle. Although in the centre there isn’t much privacy between you and the person in the seat next to you, the fairly thick infrastructure keeps things nice and separate. Despite no substantial divider and a lower than average height, I hardly noticed the person in the seat next to me.

The seat’s flexible design is helped by a nice 50″ pitch, which allows for a complete horizontal inclination that’s programmable via a panel that shows several different seat configurations. Simply press one of the buttons and the seat smoothly transforms accordingly.

Connected to the seat is a spacious desk area with a storage locker that’s big enough for all the usuals.

Aircalin’s entertainment system could use with a richer choice of movies and TV shows, but the 15.3″ HD LED touch screen looks gorgeous. The display is colour accurate and pops for a visually immersive experience, with the simple system working fast and intuitively.

You can use your own headphones on the entertainment system or attach the supplied ones, which work fairly well although they are prone to slipping off the head unless you wear them towards the back. Still, they are of the same high quality I’d expect from a pair of Business Class headphones.

A USB socket is located directly next to the seat as part of the desk space so a device is easily accessible even with a short table. There’s also an AC power outlet.

On my flight there were four attendants ready to serve passengers in an instant. Speed is fast, warm and very attentive with very little disturbance for those who don’t want it. Staff are multi-lingual and were fast at clearing empty food trays.

The food itself could be better though. I actually had a better meal in Premium Economy in the opposite direction. Although I was asleep for the main course. Breakfast was simply omelette with lightly fried tomatoes, bacon and mushrooms. The eggs lacked any flavour, but the tomatoes were nice and fresh and the bacon was a step-up from the usual you’d get in a lower-tier class. The better option is croissants, which are light and fluffy – the benefits of being on a French airline.

Much like Premium Economy, the lavatory featured various scents and amenities from pump bottles that were able to be used for passengers to freshen up. Although you’d have to be a very infrequent flyer if you need to refresh on a breezy 2 hour flight. Still, it’s a nice touch that I’ve very rarely seen on other airlines.

We landed 10 minutes ahead of schedule and were straight to the gate shortly after that. Easy and simple.

Aircalin have taken great lengths to ensure their new Hibiscus Business Class reflects and celebrates the modernity of the A330neo. In opting for the excellent Stelia Opal, they’ve managed to provide passengers a cabin that’s truly worth the cost. Food could be better (although I can only comment on the breakfast), but service, comfort and the overall aesthetic appeal of the cabin is exceptional for such a short time in the air. I would gladly fly this class on longer hauls, which for Aircalin include flying Tokyo and Osaka via Noumea.

To book a flight to Noumea with Aircalin head to their website HERE.

The writer flew Aircalin’s Hibiscus Business Class as a guest of the airline. All opinions are that of the writer’s.