Of the four Fairmont properties in Vancouver, only two can claim the distinction of immense waterfront views. Grand harbour vistas that stretch all the way to majestic coastal mountains, promising inspiration for all those who visit the great British Columbian city, immediately connecting them with the sense of adventure that gives Vancouver its allure.

Fairmont Waterfront stands at the meeting point of Howe Street and Waterfront Road, hugging the curve that connects Vancouver’s CBD to the busy waterfront precinct. This is where the city’s family-must Christmas Markets are set each year, as well as the landmark Canada Place, and various shuttles to essential destinations like Capilano Suspension Bridge Park and Grouse Mountain. Sushi lovers are especially spoiled with upscale city-best Miku Restaurant just across the road, and those leaving on a cruise from Vancouver will be at an advantage, with the terminal just a stone’s throw and the hotel participating in a door-to-door luggage service.

The hotel is a short walk from Waterfront, Burrard and Granville stations, which means guests have easy on-foot access to not only Downtown, but also the boutique-lined Gastown, trendy West End, and – for those who don’t see 20 minute walk as anything to complain about – Stanley Park. As far as location goes, Waterfront Fairmont is impossible to beat, equalled only by the Pan Pacific Hotel which is directly across the road.

Aesthetically, Waterfront sits somewhere between Fairmont Hotel Vancouver’s historic charm, and Pacific Rim’s ultra-modern chic. The lobby has plenty of unused space, but feels grand with its enormous framed map of the coastline standing over a small lounge area.

Upping the convenience, this Fairmont is connected, via its bottom floor, to Waterfront Centre which has its own food court and a short list of convenient shops. Though, given the proximity to the CBD and Gastown, shoppers will want to look elsewhere for Vancouver’s best picks.

Sustainability as a Core Value

The hotel’s ARC Restaurant shoots off the marble-floored lobby and curves around the building, evidently a popular place for business casual cocktails and produce-forward dinner. Nightly live music from 6pm helps, bringing a bit of life to the otherwise sluggish lobby.

The restaurant is also a seat for the hotel’s commendable commitment to sustainability. Fairmont Waterfront is a “5 Green Key” hotel, as ranked by reliable sustainable certification program Green Key Global. This positions the property as a key part of Vancouver, which is on-track to become the greenest city in the world by next year.

An admirable zero waste policy has seen the hotel divert 90% of their waste away from landfills for months on end, part of a plan that’ll see them maintain that standard for the foreseeable future. Furthermore, the hotel’s culinary team brings in produce via various partnerships with local fishermen and farmers, meaning guests have access to sustainable seafood and a range of organic wines.

Though perhaps the philosophy here is best expressed on the hotel’s rooftop, which features a 2,100 square foot garden and produces over twenty varieties of herbs, veggies, fruits and edible blossoms. It was first plated back in 1995, and has since grown to be one of the hotel’s proudest features, alongside an apiary on the third floor terrace which has four beehives and over 250,000 honeybees. There’s even an hour-long tour offered to guests detailing everything there is to know about these buzzy honeypots.

And of course, this means that the hotel jars its own fresh-from-the-source honey, used in many dishes plus a few cocktails down at Arc. It’s probably why on a quick walk-through during dinner I spotted so many of the kitchen’s signature ARC tasting platters on tables. The $50 menu board is a very generous spread of deli meats from local farmers and fresh Ocean Wise seafood with seasonal vegetables (obviously picked from the rooftop) and various sauces.

While I didn’t have dinner there myself (the price tags are quite ambitious), the breakfast is exceptional, and I daresay the best hotel breakfast I had while in Vancouver. Healthy smoothies feature prominently on the a la carte menu, as well as seasonal fruit plates and four different kinds of eggs benedict (classic, salmon, Dungeness crab, and garden). I went for the salmon, which comes with leek and fennel fondue as well as a very light but full-flavoured hollandaise. Salmon in British Columbia is amongst the finest in the world, so you can imagine how refreshing and rich this was.

Aside from the a la carte, there is a reasonably priced breakfast buffet with BC staples: house-smoked salmon, pancakes, omelettes, and of course some of that perfect rooftop honeycomb.

Room With A View

Waking up on the exceptionally comfortable king size and immediately being gobsmacked with such an incredible view will make most other mornings seem dull in comparison. The team at Fairmont know their vista is enviable, pulling in Vancouver’s dramatic scenery that has ‘escape’ written all over it, and they use it very well. 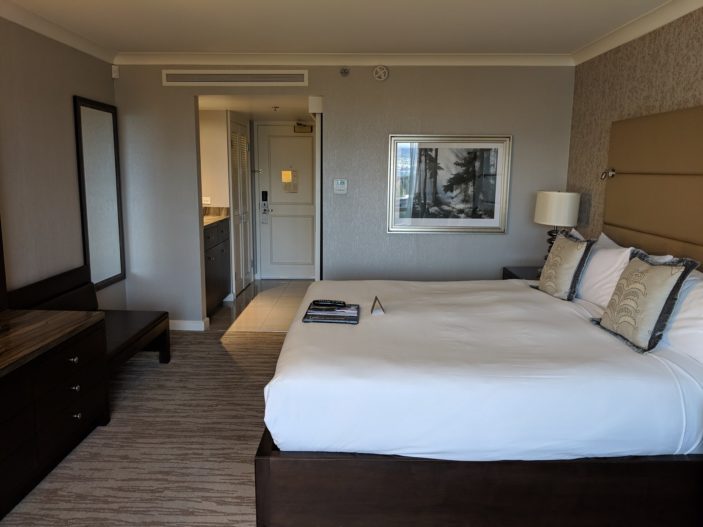 Both the Signature Harbour View Corner Room and its adjoining bathroom (with Le Labo Rose 31 amenities) emphasise spacious living, and pure comfort. It is, after all, Vancouver; where the large majority of visitors spend days on end exhausting themselves outdoors only so they can come back and catch their breathe. Having a base so comfortable is a valuable asset in British Columbia, even more so when it looks as good as this one; warm browns and creamy golds are married with softer, more gentle blues in an homage to location.

A 50-foot heated pool juts out of the building on the same terrace as the rooftop garden, and while Vancouver’s climate isn’t exactly outdoor-pool friendly, it’s worth braving the cold to take a dip in the clean air, surrounded by that inspiring view.

The 24-hour gym has a better view towards Stanley Park, so when you’re not doing laps around the iconic green oasis, you can still admire those impossibly tall Douglas firs while getting a workout.

You wouldn’t expect anything less than perfect from a hotel brand of this repute. Swift and knowledgeable desk staff make navigating the area a breeze, as do the concierge team who seem most busy heralding guest demands for the hotel’s on-call Downtown car or their luxe BMW bikes (first-come, first-serve) – both services available to anyone who signs up to the free “President’s Club”.

I’d expect much of the same from those leading the 6:30am running club, highlighting the hotel’s small but easy and accessible wellness program. And in another nod to the eco-friendly reputation, there’s free parking for electric cars.

It’s pricey as you’re looking at around AU $354 a night, but Fairmont Waterfront easily justifies the cost.

While the design is safe, the real hooks at Fairmont Waterfront are its incredible location, spacious rooms, excellent food, and admirable ethos. Service is of Fairmont’s usually high standard as well, so although the asking price is quite high, there’s a lot to love about this property and the comfortable, convenient experience it offers.

The writer stayed as a guest of Hotel Fairmont Waterfront.

All images by the writer unless otherwise stated.