Exploring Denver’s RiNo Art District: How to spend the day, and where to stay the night 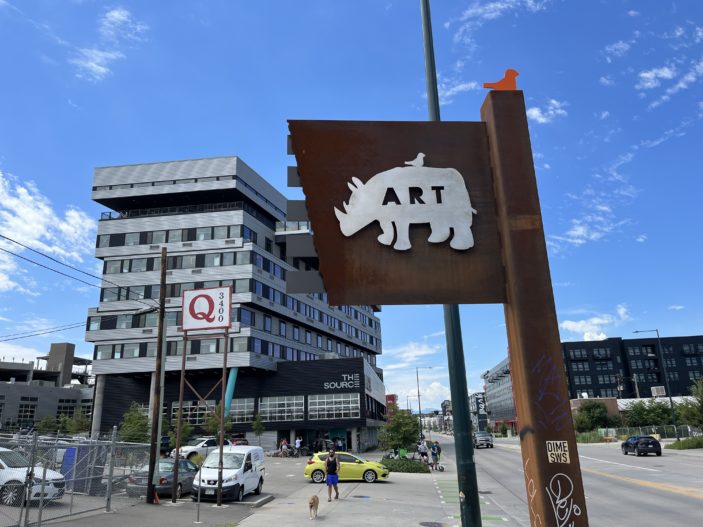 An easy trip from Denver’s International Airport on the A Train, and minutes from Union Station, Denver’s River North Art District – known as RiNo – was established in 2005 and sits as part of the city’s ever growing Five Points neighbourhood.

There’s a lot to love about the vibrancy of the district, but one of its biggest selling points is that with 17 breweries in 2 square miles, it sits as the most densely populated area for beer production outside of San Diego. And while we’re not going to be looking at the breweries in this article, we are going to start at one of the best hotels and destinations in the area, The Source Hotel and Market Hall.

Which also happens to have a brewery contained within its walls.

The Source Hotel and Market Hall

Opening in 2018 with 100 rooms across 8 floors, the new build (which you see in the article header alongside the RiNo art logo you’ll spot around the area) sits adjacent to a 1880s ironworks factory, which is now used as their Market Hall. There are a number of dining and shopping options spread across both buildings.

I started my day with an amazing pastry from Reunion Bread in Market Hall, which also features a pizzeria (Grabowski’s), the sushi bar Temaki Den and more.

Meanwhile, outside, the beautiful smells of BBQ from the restaurant SMōK drift over the area. The entry for SMōK sits on the second floor of the main hotel building, alongside a florist and the restaurant Safta, which does an Israeli buffet brunch on the weekends. While I didn’t make the brunch, I did eat there for dinner and it was absolutely spectacular. 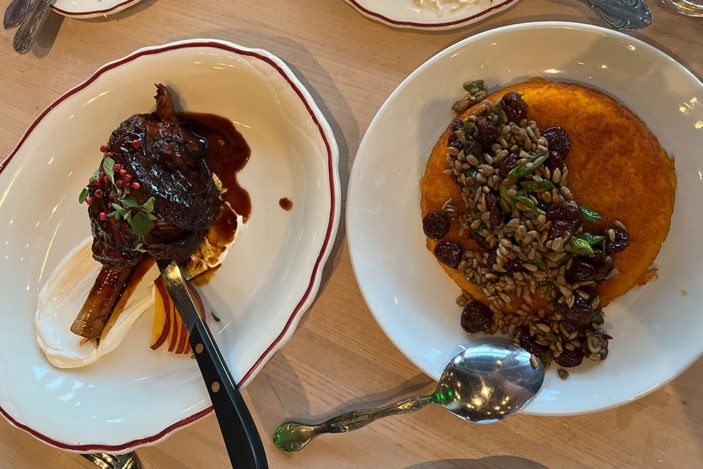 The Woods Restaurant sits on the hotel’s rooftop and offers an impressive breakfast, including one of the best breakfast burritos I’ve had in a while. And I’m told their omelettes are fantastic as well. All this sits alongside a rooftop pool and an incredible panoramic view of the area. 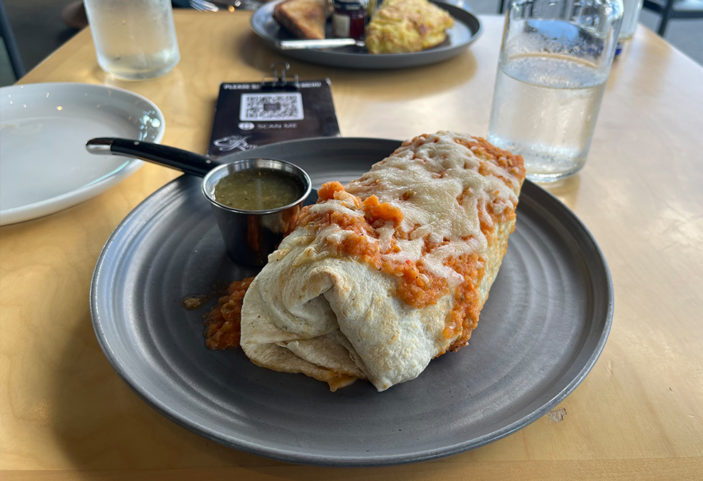 Certainly worth a visit even if you’re not staying the night. You can see all the vendors of The Source Hotel’s Market Hall HERE.

The Art of RiNo

As breweries feature heavily in the area, so does the street art – and you’ll find around 150 murals in the area.

The Denver Graffiti Tour is one way to capture a good amount of it, with terrific hosts who showcase not just the art, but the history of the area. And they don’t shy away from some of the more controversial topics that the gentrification of the area has inspired both in the locals, and the art that you’ll see – even if it’s not always overt.

The tour – which attracts a diverse demographic – starts at a piece by The So-Gnar Creative Division, commissioned by Visit Denver. The majority of pieces are by local artists, but there are some guest artists and collaborations between local and out of city artists.

One of the most famous pieces in the area is Jeremy Burns’ (@jaysaybay) Larimer Boy/Girl, which sees two different pieces pop up on the wall, depending on which direction you’re walking. 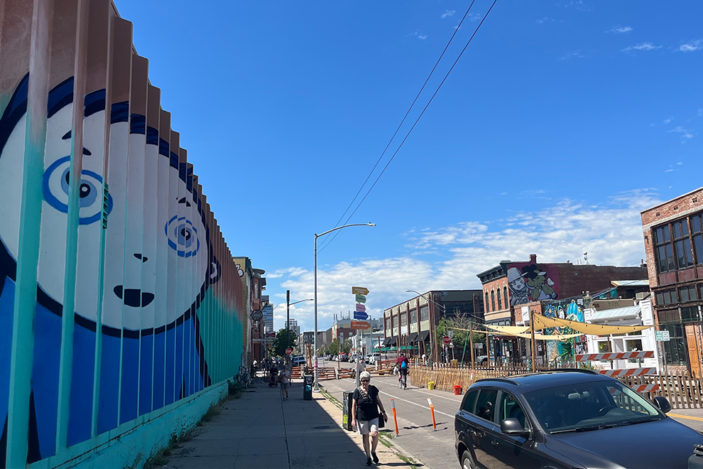 Below you’ll see one of my favourites – by Sandi Calistro and Sandra Fettingis at 31st & Larimer. This was one of the murals posted for the 2020 CRUSH Walls event – which turned out to be the last of the largest annual street art and mural festival in Colorado. 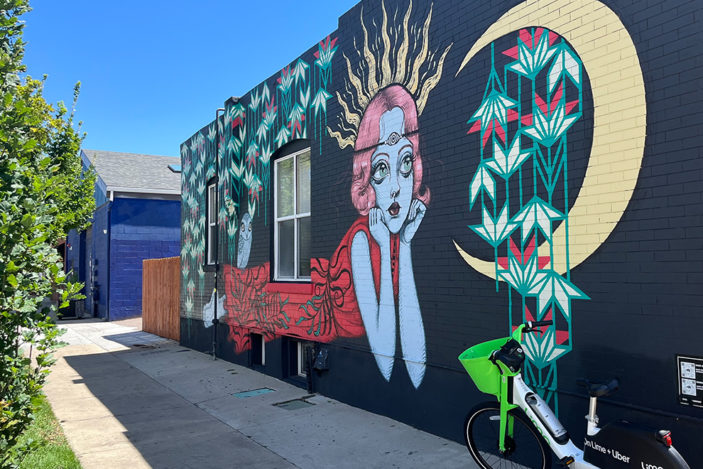 One of the newest pieces on the tour was “Justice” by New York artists @menaceresa at 2860 Walnut St. The Lady Justice mural sees the late Supreme Court Justice Ruth Bader Ginsburg joined by the newly affirmed Justice Ketanji Brown Jackson. 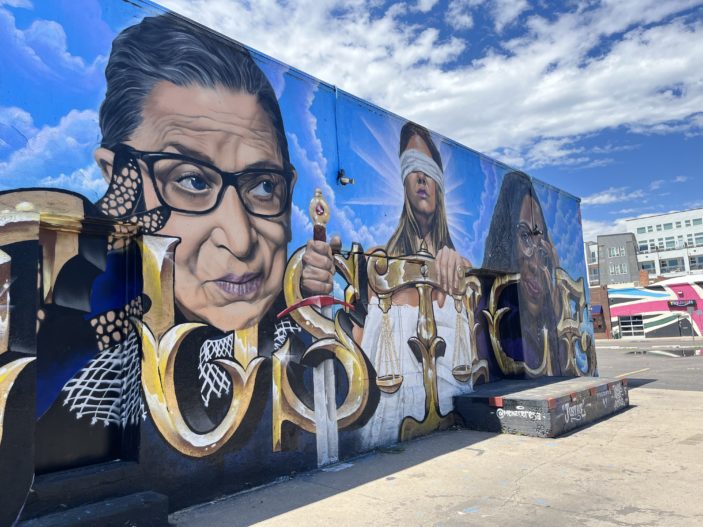 You’ll even find a Shepard Fairey piece in a parking lot, accompanied by a number of Indigenous artists, and look out for Rhinos, hidden all over the place. Some are as sculptures, others within the murals, and then there are the ART logos that you see around the area, like the one pictured in the article header. We ended the tour with Thomas Evans a.k.a Detour’s Billie Holiday, which was the only piece by an African American artist to be featured on the tour.

The city takes a lot of pride in these pieces, and will clean up any that get tagged or damaged, so you can always expect an impressive and ever changing range of art. For more details about the tour, head to their official website.

One of the best places to eat in the area is at the Denver Central Market (27th & Larimer), which was used as a middle pitstop and end point for the RiNo Art Tour. You’ll find 11 vendors at the markets, from Vero for Italian to Culture Meat & Cheese, GreenSeed for smoothies and salads, a fish market Tammen’s and the chocolatier Temper. All in a very comfortable setting. 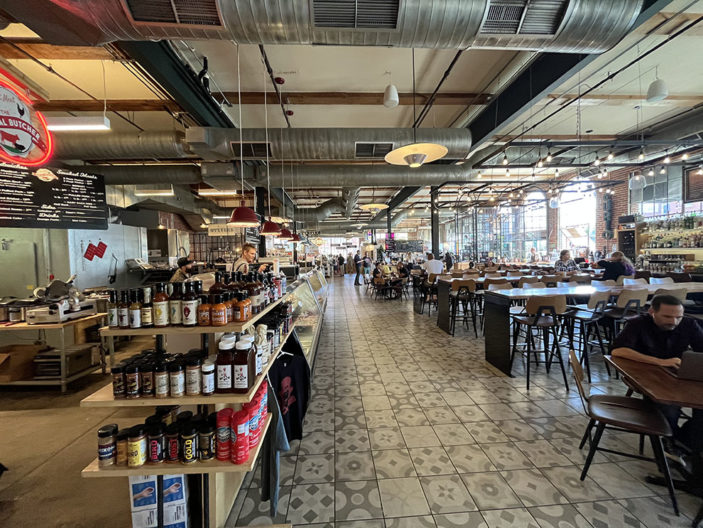 I enjoyed a spicy Cuban sandwich from Culture, who notably sold Meredith Dairy goats cheese from Australia, so you know they know their goods. I accompanied this with a smoothie from GreenSeed. It was absolutely delicious, and affordable. 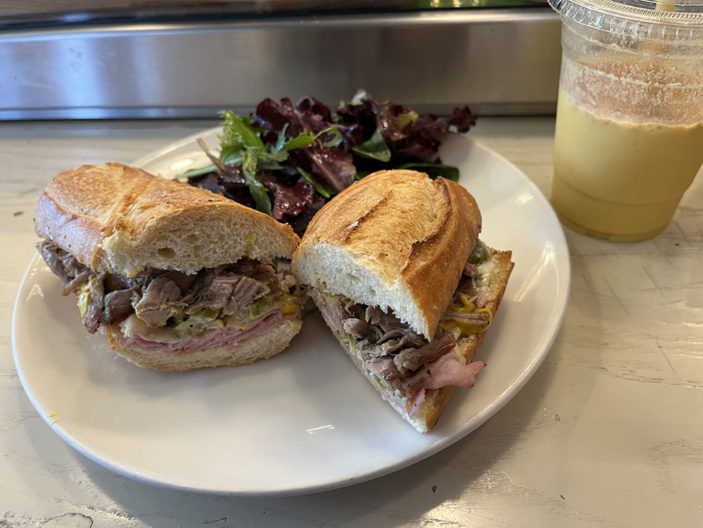 Find more details about the markets at their official website.

Before heading back to the hotel, some wine was in order, and there is no better spot in the area than Bigsby’s Folly (3563 Wazee St), which sits right by the 38th – Blake Train Station on the A Line to Denver International Airport. 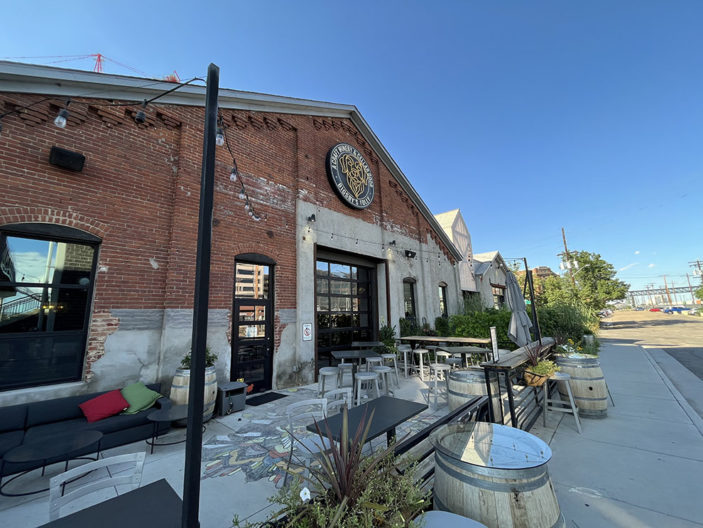 This “Craft Winery and Cellar Door” has an extensive wine list and food menu, with brunch being offered on the weekends.

Marla Yetka, the co-founder of the establishment (with husband Chad), used to live in Australia, so brings in the term “Cellar Door” from her time down under.

While still a technical term for the showroom of a winery in any part of the world, most places outside of Australia and New Zealand have stopped using it for some time, opting instead for “Tasting Rooms”. But that was her nod to her experience in our part of the world.

The building was originally a rock drill factory, built in 1886, which they pay homage to with one of their reds, “The Rock Drill Reserve”.

While based in Denver, 90% of their production is in the Napa Valley (California), but there is some done on site, and grapes are also used from Sonoma (also in California). And with tastings available, you’ll get to try a little bit of all of it when you visit. 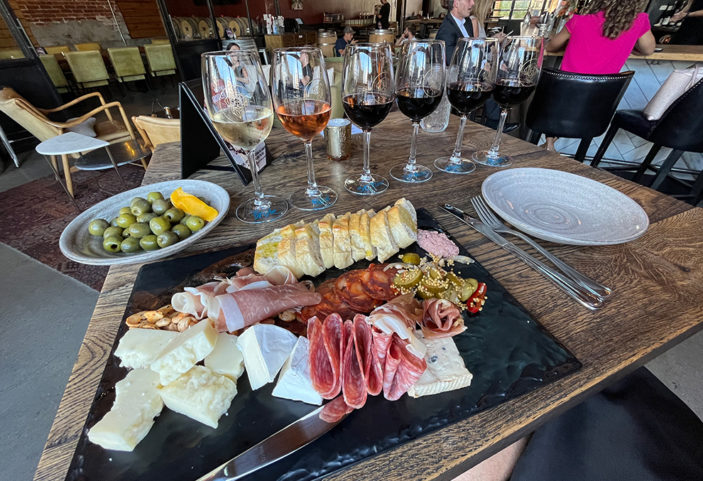 A charcuterie board is a must, with the merlot mustard seeds a particularly inspired inclusion, and a great selection of meats and cheese across the board. The wine, too, was of high quality – and their Pinot was my favourite of the pack I enjoyed.

Who would have thought you’d find such great wine in one of the brewery capitals of the US? Head to their official website for the full list of wines, and more details about Bigsby’s Folly.

Staying the night at The Source Hotel

When you’ve exhausted your day in RiNo, the only thing to do now is to head to slumber at The Source Hotel, who’ll gladly serve you a taste of their on site brewery, New Belgium Brewing, on arrival. They were offering up a taste of the IPA or the Wheat Ale, freshly poured, on the days I stayed there.

If the beer didn’t ease you into your stay, the comfortable, fragrant smells of the hotel will, as you walk inside the impressively designed property.

The room is built for comfort, with a layout that reminded me of one of the rooms I stayed in at the Ace Hotel in Los Angeles; lots of natural night, with beds not quite together, giving each guest some privacy for the long night. 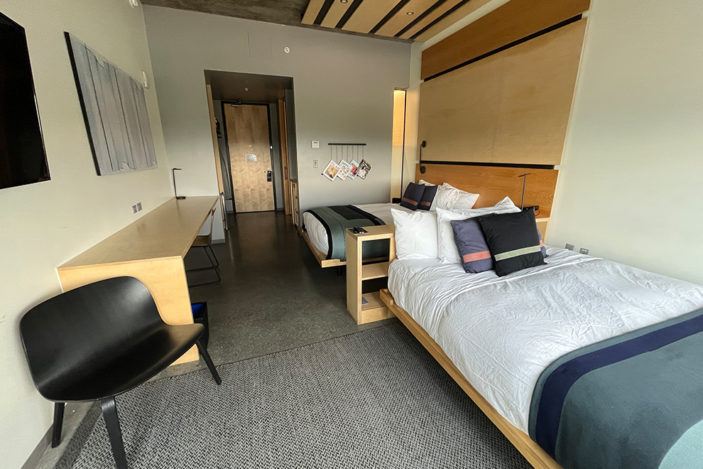 The beds are comfortable enough, but the robes and slippers in the room, plus excellent toiletries from Bodyography, will only add to the cosy stay. And with no carpets (just a rug under the bed), this is a hotel that has been designed to be pet friendly. They even have pet bags at the front door.

And if you have time, you can run up to the saline pool and hot tub on the roof with panoramic view, which is open 8am-10pm. A perfect way to start, or end, your busy day in RiNo. You can find out more about the hotel and accompanying Market Hall at their official website. 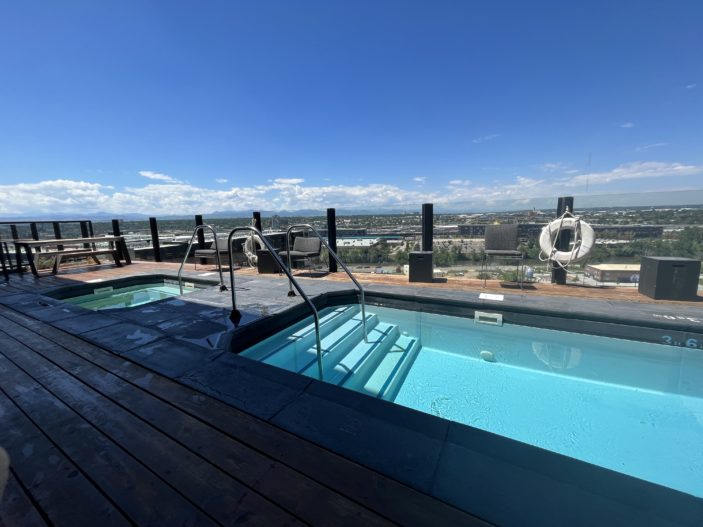 RiNo is an impressive area, that has no doubt had even more additions since I explored in August. So fast is this region growing, as is the gentrification of the area, that many have suggested it was the inspiration for the South Park season that took us to “SoDoSoPa (South Downtown South Park)”. And while there’s plenty that could be written about that side of the conversation, ultimately what they’re striving for (and achieving) here is impressive – an arts & dining district that sits as a world class destination. I for one can’t wait to see how they continue to develop the area in the years to come.

The A Train goes to the airport, and takes you within a 10 minute walk of The Source Hotel. It’s a 30 minute journey on the train and it goes every 15 minutes. When I was there in August they even had RTD free for the entire month!

While there are no direct flights to Denver from Australia, flights into Honolulu, Los Angeles and San Francisco from the east coast of Australia will get you through to easy, direct connections to Denver, Colorado.

The author visited Denver, the RiNo Art District and stayed at The Source Hotel thanks to the support of Visit Denver and Colorado Tourism. With additional thanks to Bigsby’s Folly, Denver Central Market and the Denver Graffiti Tour.