No one who has been to Canberra in the past few years would dare say the city lacks character. Though Australia’s capital may be better known as the seat of a chaotic political scene, its not hard to be won over by world-class museums, stunning urban vineyards, classic markets, spectacular light festivals and an exceptional dining scene – all within walking distance of one another.

Much of this cultural vigour can be found over at Kingston, easily one of Canberra’s most highly sought areas, which makes an option like East Hotel all the more attractive. The property sits on the edge of this vibrant neighbourhood, close enough to hot spots like the every-Sunday Old Bus Depot Markets, but far enough to also lean towards leafy, upscale Manuka.

That’s two neighbourhoods easily accessed, both with their own distinctive identities – Kingston for its art and casual café scene; Manuka for its natural beauty and chic wine bars – which gives plenty of reason to base yourself at this beloved independent hotel.

If the weather is behaving, make sure to pop by the 1930 Manuka Pool, which is about a seven minute walk from the hotel. Guests have free access to use the peaceful public pool.

But location isn’t all that this new-build has going for it. Opened in 2012, East Hotel was instantly embraced by visitors and locals alike; the former because of it’s affordable price point, superb comfort and fashionable design, and the latter because of its excellent trio of food and drink venues.

And food is certainly where East Hotel thrives, heavily biased towards traditional Italian dining thanks to affable Roman chef Francesco Balestrieri and his laser focus on fresh produce and comfort food. He leads the kitchen at East Hotel’s biggest pull, the bright and vibrant Agostinis, which is said to be quite the hot spot for locals and politicians.

The festive restaurant, beautifully shaped by designer Kelly Ross, does up spectacular pasta dishes like the Gnocchi Con Salsiccia, which has a precise flavour lifted by Italian pork, fennel and chilli sausage that has been slow cooked in the tomato sugo. Meter-long pizzas are also very popular here, with dough that naturally rises for 72 hours before being prepared in the kitchen’s rotating Marana Forni pizza oven, which was imported from Verona and remains the only one of its kind in Canberra.

And while I didn’t try the pizza, I can definitely vouch for the kitchen’s way with bread. Their Focaccia is possibly the best I’ve ever had.

As East Hotel’s major playing card, Agostinis is also the only Italian restaurant in Canberra to be validated by the Italian Chamber of Commerce with an official – and very recent – official Ospitalità Italiana certification, a worldwide recognised brand that indicates the best quality of food and service in Italian restaurants.

Then there’s Joe’s Bar, also Italian by heart with a slim and theatrical fit-out. The funky, youthful cocktail bar is a colourful place to spend the night slowly working through a tempting cocktail list, which includes five different types of negronis and – my favourite – an incredibly well balanced Smoked Old Fashioned.

Joe’s Bar also has a substantial menu of fresh share-style bar snacks. In fact Agostinis, replacing a French restaurant called Ox Eatery, was opened by hotel managers Dan and Dion Bisa because the small bites initially introduced on the menu at Joe’s Bar proved so popular that it quickly become as much a dining destination for locals as a beloved small cocktail bar.

Café Muse is the final factor in this celebrated dining trio, best approached as the hotel’s go-to for a good a la carte breakfast. Start the morning with the likes of Sriracha Eggs Benedict or Smoked Ocean Trout Kedgere, and you’ll soon see why locals outnumber hotel guests at any time of day (they also do lunch and dinner).

Although most distinctive about Café Muse is it’s collection of books. While the raised dining area holds the most seats, the biggest score is a place at the long table which sits at the centre of an active bookshop. Some of the country’s top writers, politicians, artists and winemakers regularly pop by and do events here, and as a guest you might be fortunate enough to stumble into one.

An admirable dedication to promoting local wineries also lifts East’s food and drink offering, with a special section of the reception dedicating to displaying whatever winemakers are being highlighted during a particular month. 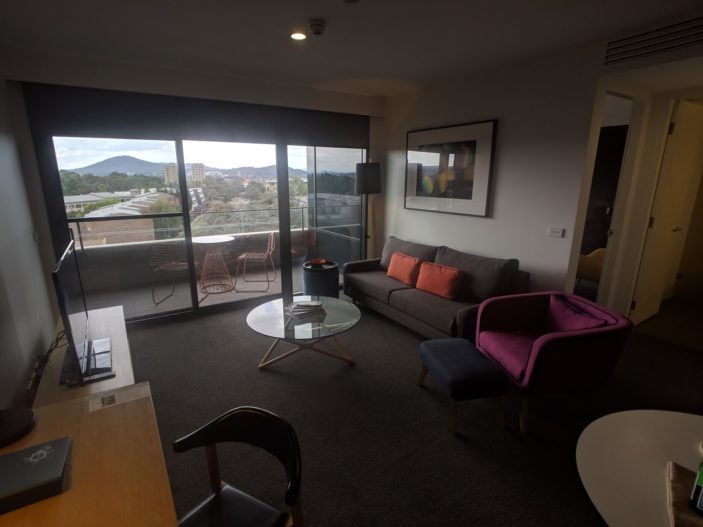 There are no less than 19 awards for East Hotel, proudly hung on the wall opposite elevators which quickly whisk guests up to their apartment-style rooms. 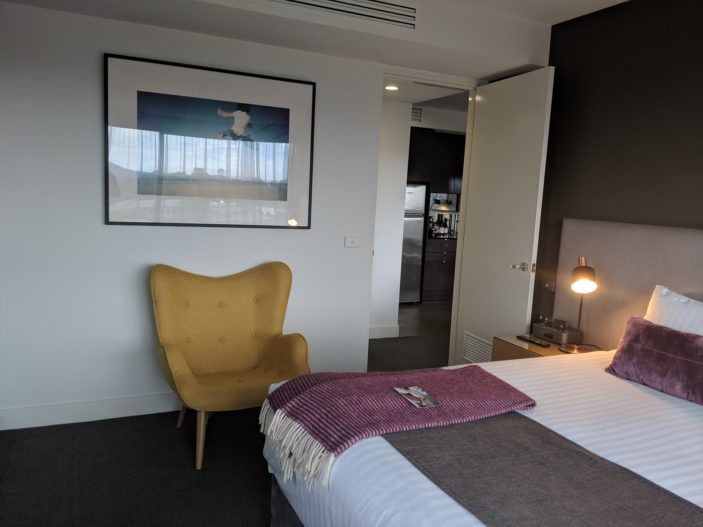 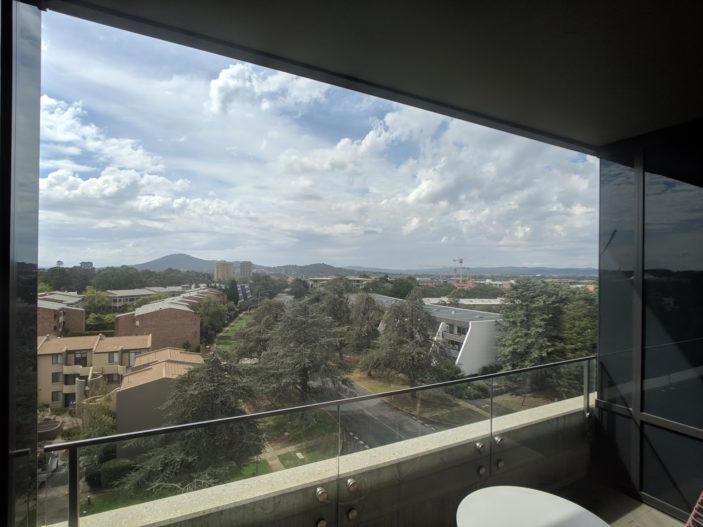 My One Bedroom Apartment was smart and contemporary, cleverly given a bit of character with mismatched furniture which helps lift the otherwise straight-forward and comfortable design. The beds are supremely comfortable, and the rain shower is pleasant in the modern bathroom. Although the tub, which sits at the centre, is quite small and not exactly tall-guy friendly. 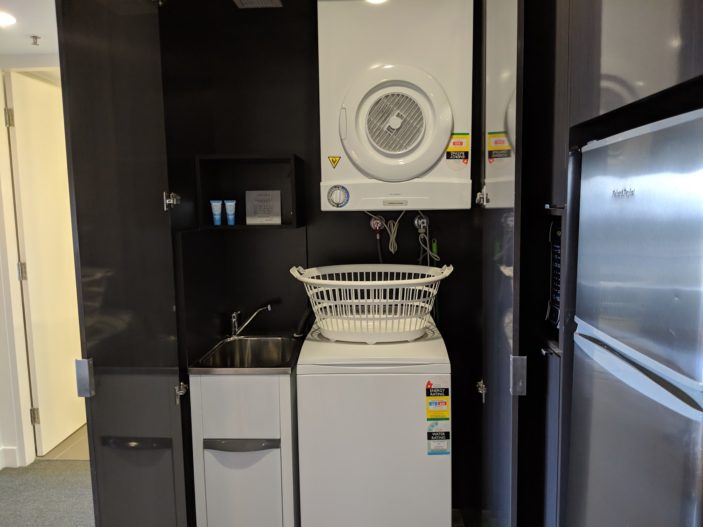 It seems long-term guests will get the most value here, with a full kitchenette and laundry facilities plus a decent sized balcony overlooking residential views that are peaceful, if not unremarkable save for the distant Mount Ainslie. 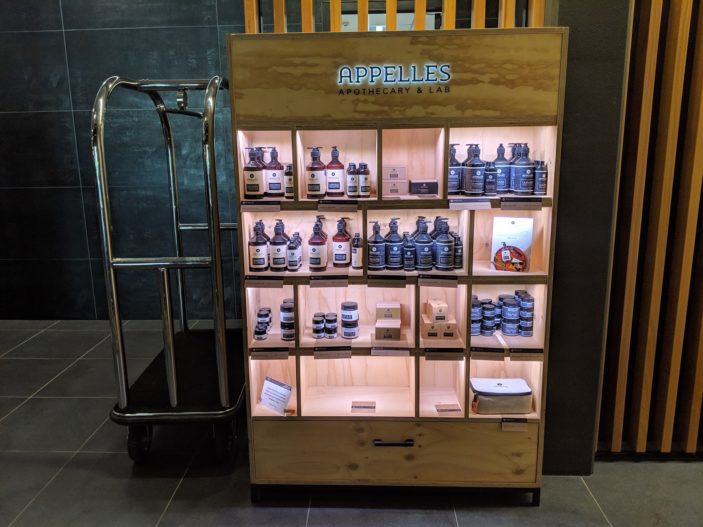 While there’s no pool – remember, just walk to Manuka Pool – there is a 24-hour gym which is well-stocked and seems to be maintained consistently.

An Appeles showcase is featured down in the funky high-ceiling lobby, featuring a complete display of the brand’s range which builds upon the standard amenities featured in the bathrooms.

Good, classic service is key to East Hotel’s guest experience. It’s safe to expect impeccable, warm and inviting staff from check-in to check-out, especially if you happen to run into the hotel’s lovely managers.

With an average nightly rate starting at AU $199, East Hotel is a smart choice for Canberra’s long-term visitors, or just those who want a quick getaway to our nation’s capital.

East Hotel embodies the flair and freedom of an independent boutique hotel. It’s clear the hospitable managers have mirrored the hotel off their warm, inviting personalities, creating something crucial for Canberra’s hospitality scene.

The trio of stunning food and drink destinations has a lot to do with it, but so does the energetic lobby and comforting apartments.

The writer stayed as a guest of East Hotel

Feature image supplied. All other photos by Chris Singh.