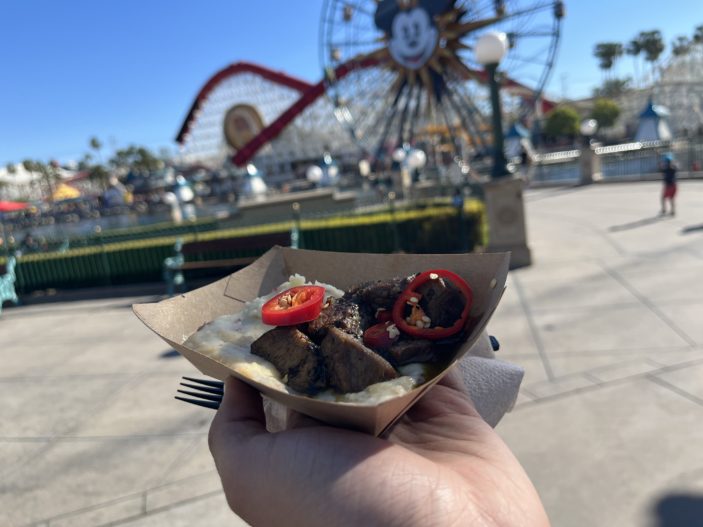 At the end of the 1980s, Walt Disney World in Orlando was booming; overtaking the swampland they acquired for “The Florida Project” while founder Walt Disney was still alive with no less than three parks: Magic Kingdom, EPCOT and what is now known as Hollywood Studios (on its opening in 1989, it was the Disney-MGM Studios Park).

EPCOT, which opened in 1982, was a park that was based around a grander, never-realised vision of Walt Disney, and featured futuristic attractions (a “utopian vision of the future”), and a “World Showcase” – international pavilions in what was designed to be something of a permanent World’s Fair / Expo. In these pavilions, one can enjoy tastes from all over the world, in a mix of sit down restaurants, and grab-and-go stalls with cocktails, full meals and smaller bites.

When a second park (or a “gate”, as it’s commonly referred to in theme park circles) was announced in 1991 for California – set to take over the then parking lot adjacent to Disneyland – WestCOT was announced, with plans to import much of the East Coast park to California; porting newer versions of the existing rides, as well as its own version of a World Showcase.

In the end, plans fell through for budget reasons, and the project was cancelled in 1995. But the land was utilised for a future, more affordable second gate – California Adventure, which opened in 2001. The park did carry over some of the plans from WestCOT, however, including an on-site hotel (what became Disney’s Grand Californian Hotel & Spa). The planned Congobezi River Rapids ride became the Grizzly River Run, and “Horizons”, which was expected to make the trip, saw its OmniMAX screen utilised for the groundbreaking attraction “Soarin’ Over California” (which has inspired a new generation of rides around the world, which I talked about in this feature).

Another feature that ended up making its way over was a California version of the Epcot International Food & Wine Festival, which started in 1996. The Disney California Adventure Food & Wine Festival opened a decade later in 2006, and this year it returned for the first time since the pandemic shut down the park – and with it the festival – in 2020. The idea was simple: provide guests with an extension of Epcot’s already impressive dining options, with temporary food and drink options, often designed with a creative flair.

The difference between the park’s festivals is that the EPCOT offering usually runs longer, and later in the year (July to November), while the California version only runs through March and April. And, while the EPCOT version gives you a taste of the world, California is focused on the state it sits in. But that’s not to say California cuisine isn’t diverse – as the 12 stalls (“festival marketplaces”) and 13 participating existing food and drink locations go on to show.

There’s a little something for everyone. Vegans will love the Petite Avocado Impossible Burger with dairy-free pepper jack at Avocado Time, while carnivores will devour the nearby Grilled Top Sirloin with roasted garlic-Gruyère smashed potatoes and black garlic chimichurri, found at Garlic Kissed. I ate this one (it’s what you see in the headline image of this article), and it was phenomenal. My only regret wasn’t also getting the Carbonara-Garlic Mac & Cheese with peppered bacon, which the stall also served, and not being able to try the Rosemary Bitter Orange Mule.

A hot tip to international travellers: make sure you have your passport on you, even if you are clearly, clearly over 21. My non-US driver’s license did not cut it.

One of the newest permanent food attractions at the park is the Ant-Man themed Pym Test Kitchen, and even they are getting in on the action. The “Snack Molecules” come in special packaging with “mini pretzels, honey-roasted peanuts, and popped sorghum with spring flavors”. Definitely one of the easier options to enjoy while you’re waiting in line for the new Spider-Man ride (which lets you shoot webs from your hands!). 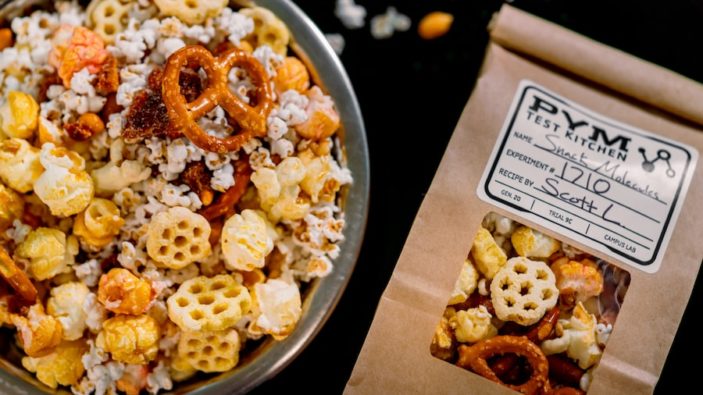 Portions are usually pretty small, but so are the prices – most dishes are under $10, so you can enjoy a variety of tastes from the State as the day progresses. You can also pre-order meals while you’re waiting in line through the Disneyland app, which also gives you a good look at what many places have on sale, and no one seems to mind you munching down on a treat or two while you’re waiting to ride.

Look out too for some special events like “Mixology Education & Tasting Seminars” and the “Carthay Circle Winemaker Receptions”. These require a separate ticket, and the next reception happens this Friday, April 8th, featuring wines from Skywalker Vineyards with Tom Johnson.

You can find a full detailed “Foodie’s Guide” to the 2022 offerings HERE.

For those of us who have followed the history of the parks, getting to experience this at California Adventure feels in many ways like the legacy of Walt Disney coming full circle.

The food on offer is both creative and representative of the State, while being of a higher quality than you’d expect from traditional theme park fare. Not that there’s anything wrong with walking about Disneyland with a footlong churro. That’s also the stuff dreams are made of. But no one is complaining when you have the opportunity to chow down on some delicious steak before you jump onto the Incredicoaster. Which you should absolutely do.

Getting to Anaheim & Los Angeles from Australia

Anaheim is located about 45 minutes from Los Angeles main airport, LAX. Daily flights out of Australia’s East Coast have now returned with most airlines who frequented the route pre-pandemic; Delta, American Airlines, United and Qantas all have direct routes from Sydney or Melbourne to Los Angeles. Qantas resumed its Brisbane to Los Angeles direct service this week.

If you’re travelling within the US, you can also fly direct to John Wayne Airport in Orange County, which is the closest airport to the park.

At the time of printing, pre-flight Covid tests and proof of vaccination remain requisite for travel. You can see America’s most up to date arrival requirements HERE.

The author attended California Adventure as a guest of Disneyland. Photos by the author except the Pym’s Test Kitchen, provided by Disney.