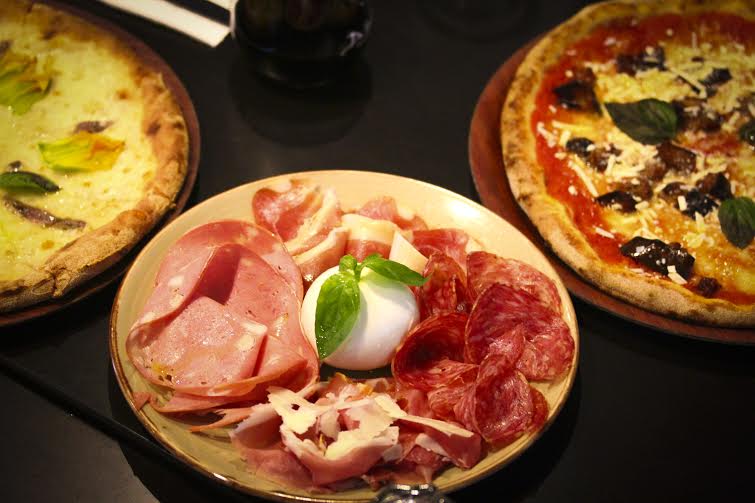 We have but no choice to be more discerning when it comes to Italian food in Sydney; the proliferation of authentic, good quality Italian restaurants across the city has educated us all on the beautiful diversity this inescapable cuisine delivers. While the new ventures are consistently giving us a reason to fall in love with Italian food over and over again, it’s the older, established Italian institutions that remain at the head of the pack, and a brilliant example is Da Vinci’s in Summer Hill which, after making a name for itself amongst locals, was re-imagined by Nicola Piteo and Valerio Rossi after they purchased it over a year ago. 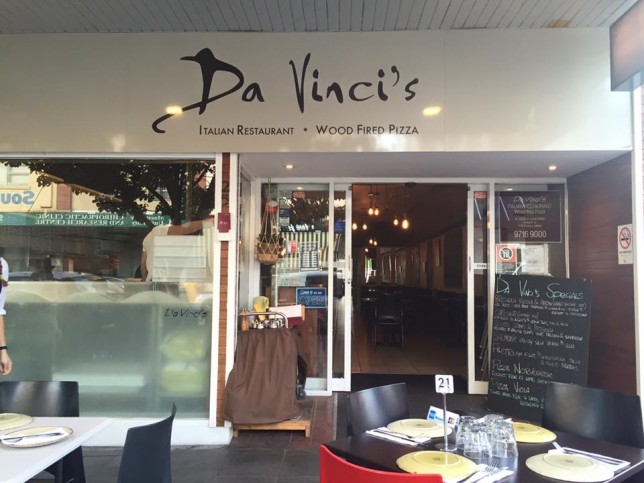 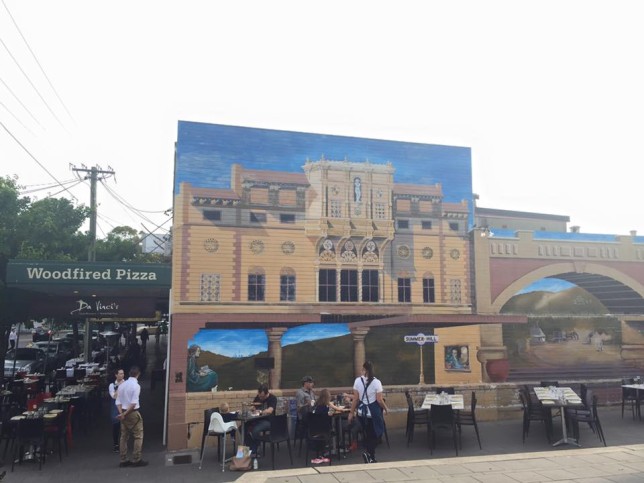 Summer Hill is an underrated slice of the inner-west, the main strip that you land on as soon as you walk out of the train station is a long line of family-operated restaurants and the central courtyard is a playground for locals. Da Vinci’s is pretty much a part of that courtyard, with long-tables set up right by it’s fountain and under the big, eye-catching mural. The strip, Lackey Street, is like a condensed version of Newtown’s iconic King Street, just with families instead of hipsters. 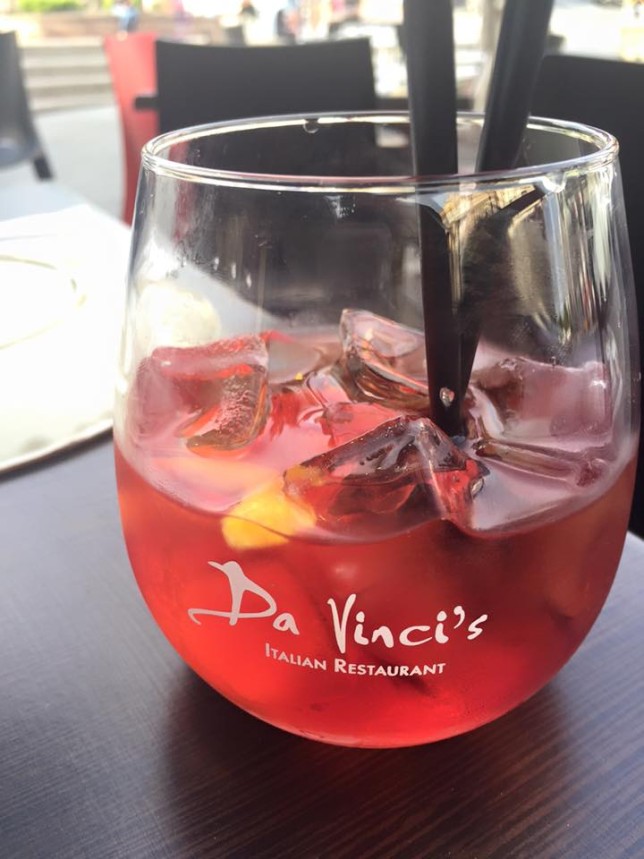 There’s no doubt that Da Vinci’s is one of the essential ingredients to the overall atmosphere on Lackey Street, the restaurant is relaxed but still full of life, the air thick with the smell of fresh pizza straight from the large wood-fired oven near the main entrance. If you opt for al fresco at the front of the restaurant, you’ll be able to watch the pizzamakers go about their business through a glass window, enjoying a satisfying feast through smell and sight even before you settle down with a bright red Negroni ($15) in hand, the Tuscany-born cocktail a careful balance of bitter (Campari) and sweet (Vermouth) with a punchy pour of Gin.

Da Vinci’s is run by a team of enthusiastic Italians who all have their origins in either Rome or Sicily, sharing an enthusiasm for refined Italian food that focuses on authenticity and freshness. This is particularly evident with their pizzas, using petra flour from renowned Italian flour mill Molino Quaglia near Padova. The only other establishments in Sydney to use this flour are Balla and PizzaPerta – both of which belong to the great Stefano Manfredi, who is also a regular at Da Vinci’s. The style of pizza is also markedly different from what you’d find across Sydney, the dough is rested for 48 hours before being used, giving the yeast time to both grow and die; as a comparison, other doughs used in pizza have yeast that dies in the oven, which is where you get the excessive black spots from. Because the yeast is already dead when you put it into the oven, the texture of the crust is noticeably different, smoother and more consistent with a very light, refreshing palate. This means it’s easier to justify hogging an entire pizza to yourself as you won’t feel bloated afterwards. The use of Petra flour also means you’ll get a sweeter, nuttier palate from the dough. 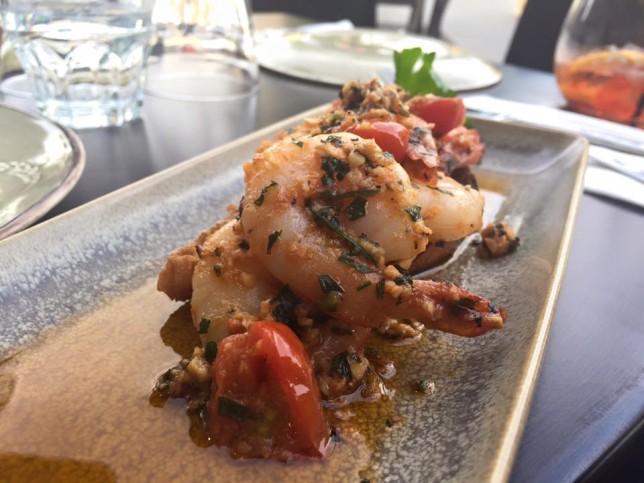 Of course, any visit to an Italian restaurant must first start with stuzzichini so my introduction to the flavour of Da Vinci’s came with Garlic Prawns ($14), pan-fried and served with chilli, extra virgin olive oil, and cherry tomatoes. As Nicola explained, the team in the kitchen are as proficient with their seafood as they are with pizza, knowing how to balance the natural flavour with quality ingredients to make for sharp tastes, of which the Garlic Prawns are no exception. 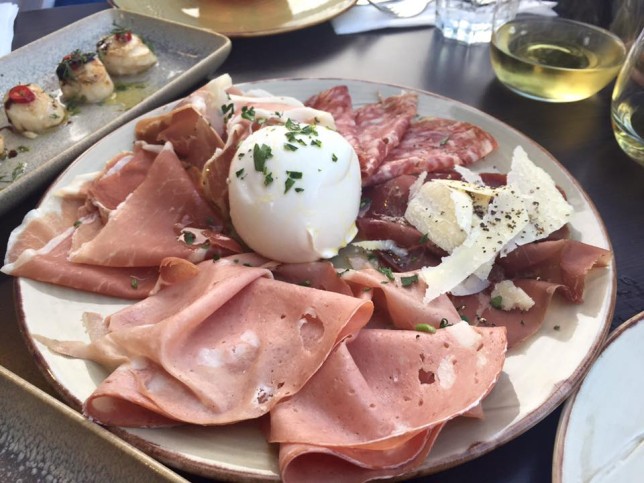 You’ll definitely want some Antipasto and the Montagna ($28) is a good choice for a table of three or four. There’s speck, mortadella, proscuitto, bresaola, and soppressata, all good quality meats presented in a circle around a fresh mound of bufalo mozzarella with some parmesan for good measure. The basket of fresh bread that comes with the plate completes the picture, and sets you up for a proper Italian feast. 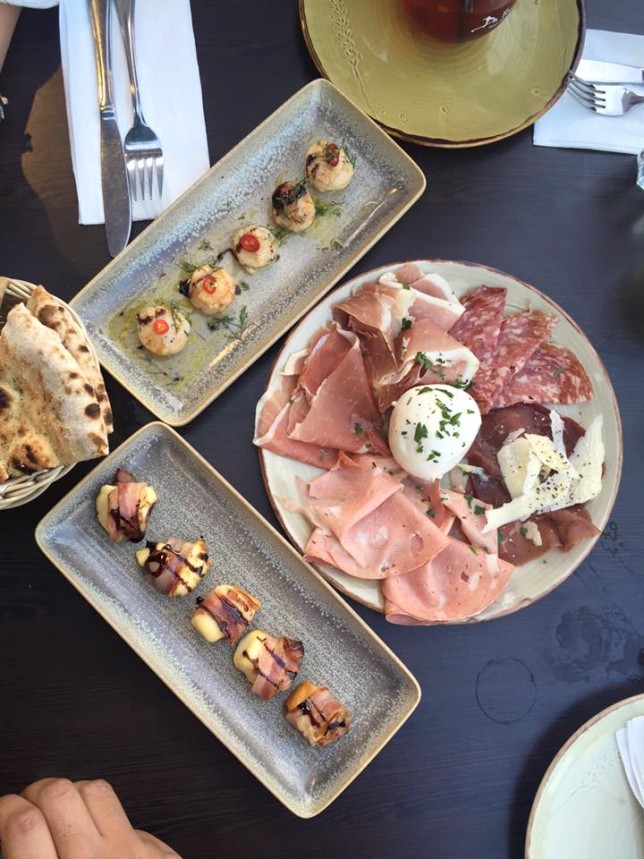 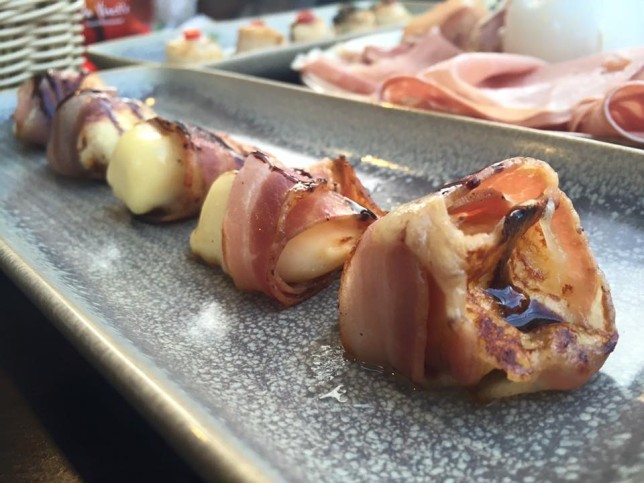 The plate of Scamorza Affumicata ($9) won’t last long. You get several small bites of smokey scamorza cow’s milk cheese wrapped up in pancetta and drizzled with balsamic vinegar cream. Each bite is salty and soft; it’s important to keep in mind that you’ll still have some pizza or pasta to get through, so try ignore the temptation to order more. 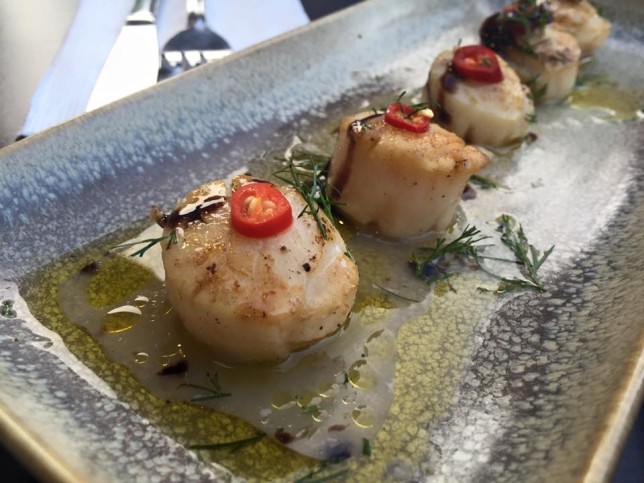 The specials board is near the entrance to the restaurant with a rotating menu based on seasonal ingredients. If the Capasanta is up then I suggest going for that. It’s an entree of grilled scallops with lemon oil, dill, and some hot chilli, again showcasing that flair for seafood with that big, lingering hit of chilli. 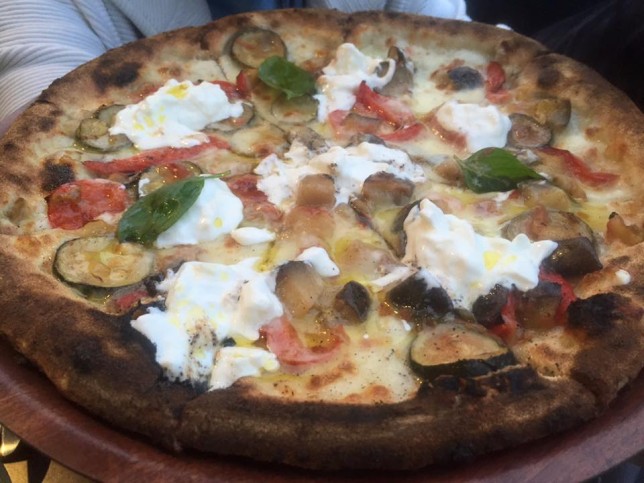 Vegetarians will be glad to hear that one of the best pizzas here is completely meat-less – the Ortaggina ($23) with eggplant, zucchini, cherry tomatoes, red onion, red capsicum, and stracciatella di bufala. Stracciatella is the cheese often used to make burrata – one of my favourite foods – and so it’s strong and milky, but not excessively so, letting the vegetables get their fare share of flavour in bringing you a very well-rounded, incredibly enjoyable pizza. 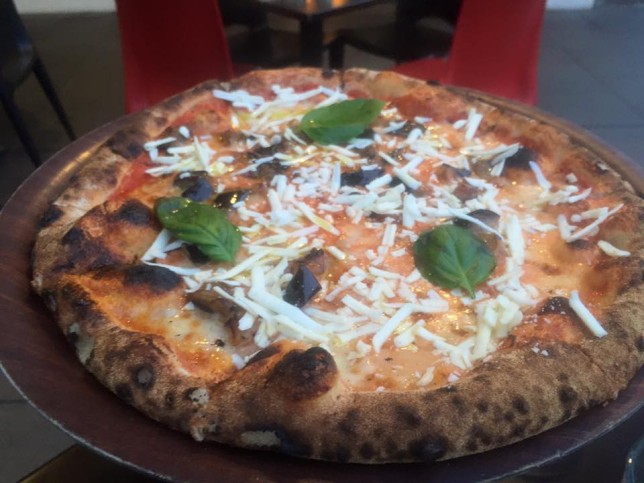 The Norma ($19) has Fior di latte, deep fried eggplants, shaved salted ricotta, and fresh basil, another great choice if after something with a tomato base. The two types of cheeses bring two different textures to the base, the fior di latte rich and creamy while the ricotta is soft and salty, matching up well with the melt-in-your-mouth eggplant. 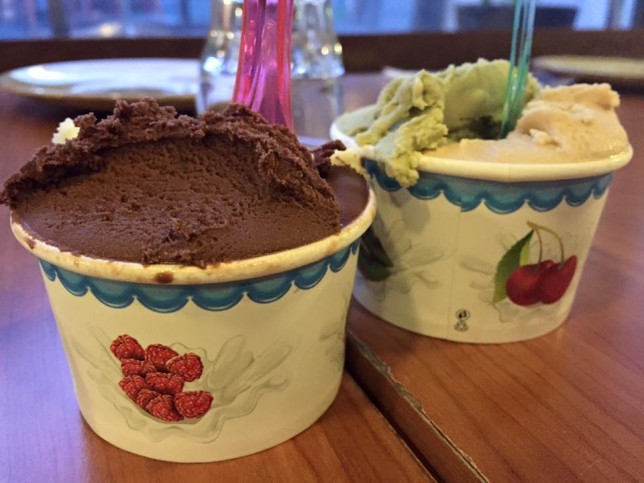 One of the more unique things about Da Vinci’s is that they have an unassuming, almost secret, gelateria attached to the back of the restaurant, Gelatony. Nicola and Valerio’s uncle, Antonino Lo Iacono, is the technician making fresh gelato daily here, putting his almost wizard-like mastery into each and every scoop to maintain a high standard. That standard is helped by global awards like the recent win at the Gelato World Tour, where Lo Iacono received accolades for his Fig-Marmalade Gelato with dark chocolate and lemon zest. Unfortunately, the awarded gelato was completely sold out on my visit, but everything else at Gelatony is said to be just as impressive. 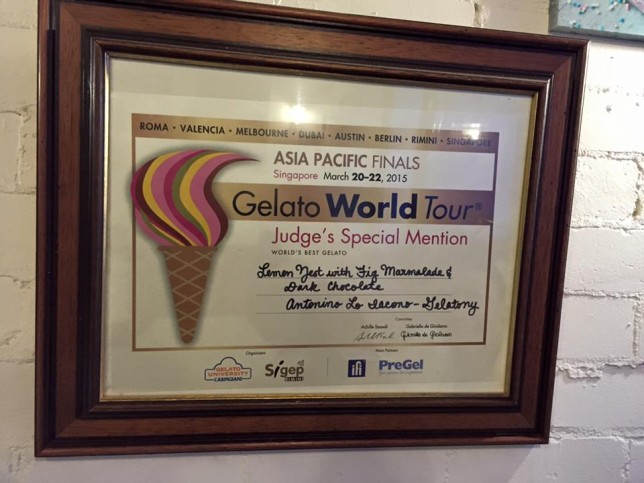 My guests and I tried several scoops of gelato, all of which brought simple, traditional flavours that focus more on craft rather than unique flavour combos. Though that isn’t to say that Gelatony lacks vitality, they are constantly coming up with interesting blends but those are usually saved for winter; spring and summer time brings more seasonal, fruity flavours.

The chocolate gelato is a revelation, full-flavoured and silky, second only to the refreshing, zesty lemon sorbet. You’d think they would be shouting from the rooftops with this quality – gelateria’s attract queues like no other in Sydney – but the humble Antonio is mostly just concerned with keeping those tubs full of classic, remarkable gelato, leaving it up to Sydneysiders to discover it on their own.

Headline image supplied and credited to Chloe Varga. All other photos taken by author.