The world’s newest Universal Studios Theme Park – Universal Studios Singapore – turns five years old this year, and there have been a few new additions to the park to celebrate. Towards the end of last year, a new Puss in Boots themed show “The Dance for the Magic Beans” launched that preceded “Puss in Boots’ Giant Journey”, the world’s first Puss in Boots themed attraction which opened in April. And just last month, the park re-opened what is described as “the world’s tallest dueling roller coasters”. 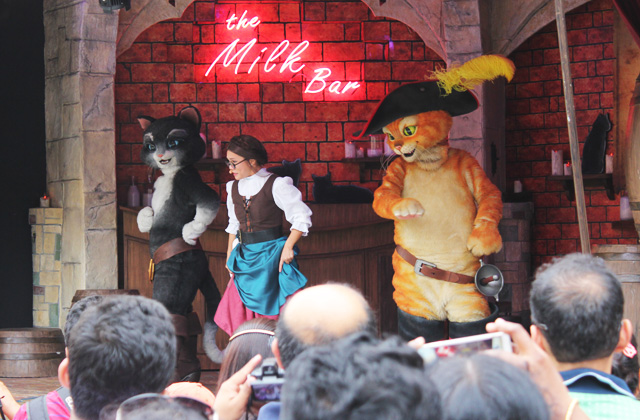 “Puss in Boots’ Giant Journey” – set in the park’s Shrek themed Far Far Away area – is an outdoor coaster designed for families and features animatronics and the voices of the characters from the film. It’s designed to tell a story as you launch off into the sky (with the help of a champagne cork) in specially designed suspended ride vehicles, each holding up to 9 people. The story is something along the lines of this: “Guests will join in the legendary exploits of Puss in Boots as they take off on an anti-gravity swashbuckling fight… The ride taking you on an adventure to search for the golden eggs so that San Ricardo’s Orphanage can be saved!” 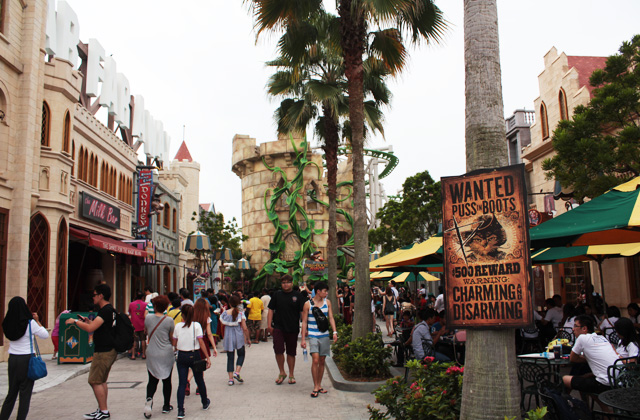 Having the opportunity to test out the ride while we were in Singapore, it’s a fun coaster for all ages – showing off the latest in technology (featuring some 23 animatronic characters) to bring a unique outdoor coaster experience, that will definitely thrill the kids, excite fans of the characters and that adults will still find enjoyable.

While we were at the park, tests were well underway for the relaunch of the dueling coaster Battlestar Galactica: HUMAN vs. CYLON, which closed in 2013 following problems with the ride vehicles. 22 months later, the ride has reopened with new two-seater (versus the original four-seater) vehicles which are said to “give each rider a more intimate and personal ride experience, enhancing the feeling of speed and thrills.” And by the sounds of things, it will be making things safer as well. 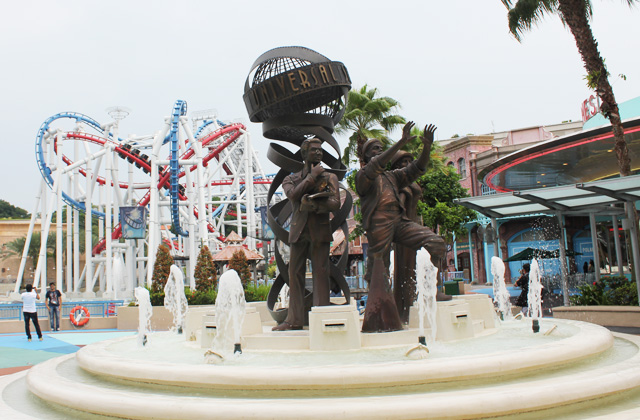 The coaster, which is the only Battlestar Galactica ride in the world, continues the Singapore park’s trend to explore franchises before the rest of the parks. In addition to the recently launched Puss in Boots ride, the park was also the first to debut the Transformers 3D ride (now featuring at many Universal parks), is the only park to feature a castle (straight out of the Shrek universe) and has more Dreamworks attractions than any other Universal Studios park… among many other world firsts…

HUMAN vs. CYLON is inspired by the Dragon Challenge at Universal’s Islands of Adventure, which also sees two tracks launch at the same time, featuring “near collisions” of the two ride vehicles. In this case, “Cylon” is an inverted rollercoaster, featuring a zero-g roll, a Cobra roll, corkscrews and vertical loops, while “Human” is a traditional seated coaster, featuring no inversions, but more G-forces, reaching speeds of up to 90 kilometres per hour.

The writer visited the park as a guest of Universal Studios Singapore and Resorts World Sentosa. Photos by the writer.